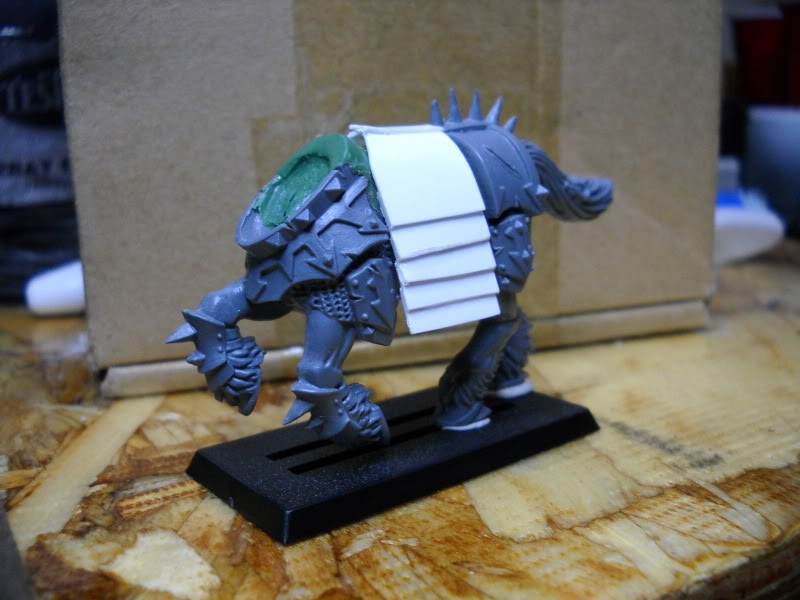 So, we have decided to try the plate mail route on the centaur. This first (rough) version is made of plasticard, and it looks fairly decent.

The strips at the bottom are to emulate faulds which would allow the armor to be flexible enough to get out of the way of the horse’s legs while still protecting the ever important ribcage. I kept the top section all one curved piece in order to help tie it into the look of the rear armor section. Also, this is a fantasy miniature, and blacksmiths would have made the armor, so curves are more common than sharp lines and angles.

Lastly, I added a strip along the top to carry the same look as the rear section.

I think I’ll have to sculpt a bit of chain mail where the new armor doesn’t quite come flush with the front armor. That’s more realistic I think because the armor sections would be too rigid if everything were one piece – the centaur would be too restricted in battle and unable to properly attack or defend itself.

Overall making this wasn’t hard. I will need to cut straighter as well as glue a little cleaner and ore carefully, but for an initial “How will this work, and what will it look like?” – it nails the theory and idea well. Plus, sticky-tack is great for testing poses and holding thing in place before you make any final decisions.