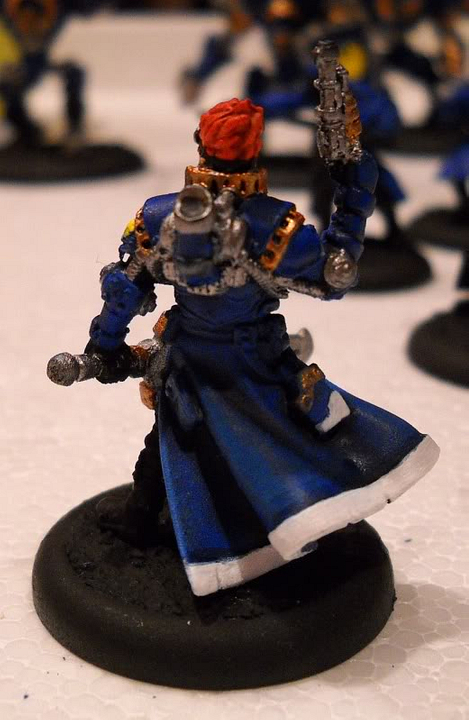 What’s your resolution?  Mine is to play my Wii Fit for at least half an hour, 3 times a week.  I have a feeling that everyone in my apartment complex will be crowding into the little exercise room, so instead, I’ll be doing Yoga, Hoola Hoops and other silly things in my pajamas!  This will go nicely with my wife’s goal of cooking more and cooking healthier.  Hopefully that’ll give my fat self the ol’ one-two knockout!

In the Realm of Models, I’m over a week behind, but with lots of family in town, that was bound to happen.  I have gotten some done though.  Here are a few highlights:

Stryker!  I hit all the models I had done thus far with my Asurman Blue wash.  It added depth in crevasses and really shaded his cloak.  Unfortunately, it also knocks the shade of the entire model down quite a bit.  Thus, dry brushing!  I dry brushed most of Stryker with the base color:  Enchanted Blue.  Here’s a before dry brush and after dry brush comparison:

You can see how the dry brushing strengthens the high parts that would catch the most light.  It’s subtle, but noticeable.

I also spent some time on Ol’ Rowdy.  His big shoulder thing got quite a bit of attention:

I dry brushed everything that had blue.  I used a big brush for the legs,  gauntlet and shoulderpad and a smaller one for the head and body armor areas. Since I haven’t done any washes or shading on the metalics, I wasn’t too worried about getting blue on them.

The wash didn’t give me the depth in the upper torso seams as I’d like.  I’ll have to black line them and the seam that goes through the Cygnus.  The yellow will also need some touch-ups, and I’m not sure how I’m going to shade it.  I brought orange with me, so I may just try and work that in.

Lastly, I had forgotten that the Squire was part of my 25 pt list (or at least in one version) so I quickly put some color onto him.  He’s just too cute!

The Cygnus’ will be yellow, the sight on his side will be silver, as will his toes.  I had no idea that he had little leather packs on his sides, so I’ll paint those in the same style I’ll be doing the leather breeches on the warrior models:  Dark Brown (cheapo acrylic) -> Graveyard Earth -> Gryphonne Sepia -> Graveyard Earth highlights.

What color should I do for the little “eye” in the front?  I’m thinking a nice, bright blue!

My biggest problem with these models is the fact that there’s 4 coats of primer on them.  There’s so much detail that’s been obscured.  Oh well.  I have to get over the fact that they need to be perfect the first time.  I need to get them done, on the table and then if I want, I can strip and re-paint one model / unit at a time.  Otherwise, nothing will ever get completed!