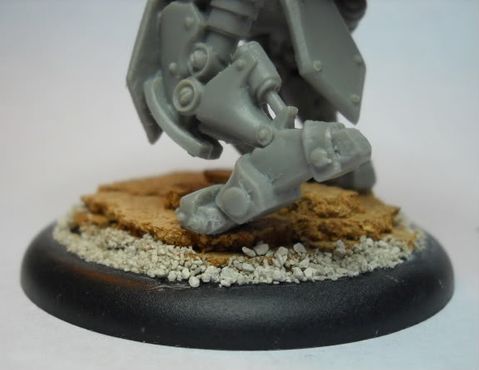 First:  The repose.  Nothing too crazy, all I want to do is give the ‘jacks a bit more motion.  I realize Khador’s some of the slowest out there, but that doesn’t mean they stand still.

The easiest way to do this on a ‘jack is to pick a leg, rotate it backwards a bit and bend the toe.  Typically that’s one cut on the foot, and a bit of filing on the post connecting the leg to the hip.  You don’t even need a jeweler’s saw, unless it’s a metal model.  Then I’d certainly suggest one.

Next, you have to re-attach the toe.  A single pin will suffice.  I drilled into the foot first, then inserted the pin.  I held up the toe until I liked the angle, and the guessed at the proper angle to drill.

I drilled through the entire toe, since I plan to anchor the toe to the base with the same pin.  Some superglue, and POOF.

A bit of attention to the post on the hip connection and it can rotate roughly 30 degrees.  At this point, I just file some, try it and see if it looks like the bottom of the toe and bottom of the other foot will line up.  Keep working the post until it looks good.

At this point I have a pin in both feet, and I’ve drilled holes into the base.  This way, I can be sure the feet won’t get misaligned when I glue the modified leg to the hip.  I also don’t have to guess where to drill holes when I get all my basing material on.

After that, I put my material on my base.  As I said before, these will be based in exactly the same way my Legion are.  That’ll tie the northern roots of the two factions, and should I do a theme board, they’ll look pretty swell.

A pin into the non-modified foot, and some superglue later…

I have the torso pinned in place but not glued.  Once I get arms going, I may give it a bit of angle to help the model’s feel of movement.

So, what do you think about the re-pose at this point?

I realize the mold lines aren’t 100% clean.  I’m OK with that.  These are for demos, and one may occasionally see action as Torch.  The mold lines are horrendous, and would easily take another week to get perfect.