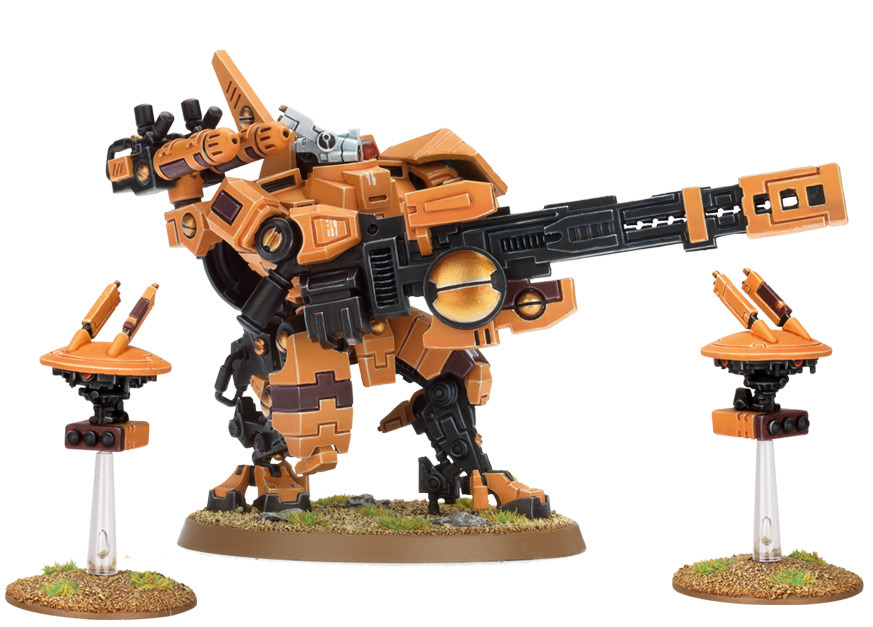 Some locals and I are getting our feet wet into 40k as a beer and pretzels game, and a way to tell some fun stories about our characters.  I’m likely to run Dark Angels (despite the earlier Tau Paint Scheme which is completely unrelated).  Buddy Ron is going to play Dark Eldar, and we may have a few others as well.  This is LynchPin’s thoughts on his Tau force.

Originally, I got my nerdly feet wet with a Warhammer Fantasy Dark Elf army back in high school. I played a few games here and there, but didn’t have much guidance or understanding on how to build a strategic army or fill army slots. But man was I sold on the models. My so called “army” consisted of the bare essentials of two regiments of Dark Elf spearmen followed by every big toy you can imagine; I had Malekith riding a dragon, Assassins, Ballista Warmachines, etc, etc. I didn’t really dive fully into the wargaming pool until I became enamored with Warhammer 40k 3.5 edition after I spent a couple of years in college. I poured over unit options, built solid armies, and strove to learn the Black Tome forwards and backwards. After experiencing the competitive scene for 40k though, I slowly abandoned the game in favor of a decade happily spent playing Warmachine. Though over the years, every so often, I find myself surfing over to the Games Workshop website on lazy Sunday afternoons to drool over new plastic kits and ever impressive sculpts from newly updated armies.

I’ve thoroughly allowed Warmachine to become the game I play as competitively as I can, but I do yearn for an opportunity to fiddle with 40k modeling and build a force based very little on tactics and competitive edge and more on a pleasing aesthetic that keeps a focus on what I enjoy modeling and telling a narrative about. I’ve been treading water, hoping one day to find a good group of like-minded people who were interested in doing a 40k project with the same aspirations in mind and who have decided to leave their razor sharp competitive edge dulled and rusted by sentiments such as: “oh that twin-linked flamer Crisis Suit looks awesome. I’m doing that.” And so I have.

Our project begins at its core by following the force org chart for Combat Patrol– a 400 point force composed of one mandatory troop choice, zero to one choice from any and all of the other standard categories, and one totally flexible unit choice from anywhere on the organization chart.

I dabbled in Marines, but was primarily a Necron player during my time with 3.5 and 4th edition 40k. Necrons have somewhat recently (to me anyway) gotten a new codex and toys to play with, but still seemed to lack the customization aspect I really crave with this project. Chaos, Marines, and Dark Eldar all crossed my mind. Chaos still possesses tremendous customization options, but I’m not a huge fan of the current aesthetic, so they’re out. Marines are… marines. They’re out only because they seem somewhat mundane with their solid and expected stat-line. I would eventually cross Dark Eldar off the list to avoid stepping on the toes of someone else participating in the project.

Though I enjoy the rules of Warmachine, one thing I’ve sorely missed are the strong elements of futurism and science fiction. To me, nothing embodies that better than Tau. For most of the other 40k forces, an argument could be made “so-and-such army is simply [insert any stereotypical fantasy theme here] in space.” Not so with Tau. To me, they are purely a construct of trying to bring some of the heavier science fiction elements to Warhammer 40k. The army has exclusive rights to rail guns, ion cannons, stealth fields, target marking,  and drone controlling implants. I’m sold. 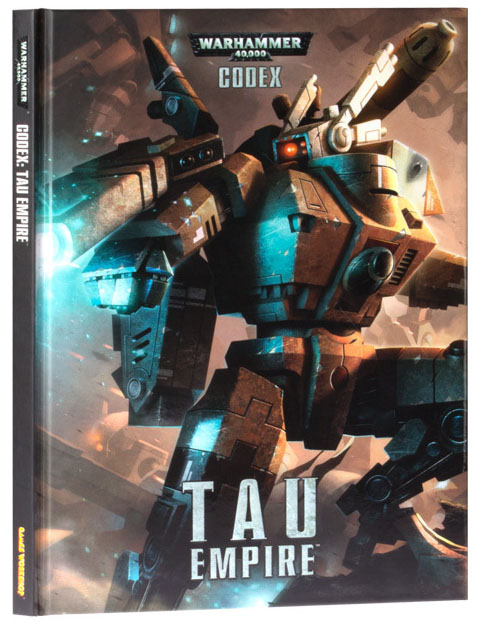 My first and primary goal is to figure out what’s “cool.” What do I like purely based on concept or aesthetic or at least gives me the sense a given unit choice will be effective- even if it isn’t. In broad strokes, I’m not terribly interested in any of the Tau armored vehicles. I’m in love with rail guns and know I’ll have some in my army, but with an array of super-sweet mecha style suits to mount them on, I can bypass the need for a Hammerhead for the time being. Missiles are not as cool as rail guns so sorry Sky Ray, you’re out too. I feel fliers are going to be more than moderately out of place for a 400 point combat patrol so those also go the way of the dodo.

With the remaining options, I think a suit centralized, mobile, run-and-gun force will tickle my fancy. I know Pathfinders are going to be involved and though I won’t be getting a Devil Fish right away, I’m leaving that option in the mental tool box despite the previous armor hate. I also want Stealth Suits because of the continued focus on cool factor, but they are getting trumped by the more potent cool factor of a Broadside with a rail rifle. The Crisis Suit units themselves are really where the draw is for me with the project though. Because there are so many ways to kit out a suit with weapons and gear, I plan to make up at least half a dozen suits with unique gear, style, and personality that will be swapped in and out on my whims.

So my 400 point force will start off with my Fire Warrior team. I won’t add any carbines here because I’ll get some later with the Path Finders, but I want the Shasui leader cause hey, with no planned HQ, I need leadership somewhere, right? I also want the optional Marker Light with Target Lock because it fits with the supporting fire team nature of this unit.

Next I add a Broadside for that sheer brute, long ranged, heavy fire power feel I want somewhere in this force. They’re expensive once I start to kit them out so I simply take one and add courses in business management (Shasv’re upgrade), crisis training (Bonding Knife), Neo-style bullet dodging (Shield Drones), and of course Plasma Rifles while I strictly adhere to the hierarchy of magnetic weapons > energy weapons > missiles > Kroot weapons > rotten fruit > falling down some stairs and scraping your knee > anything Vespid related.

I have 162 points left. Sensing the Path Finders are not going to make it in on cost constraints, I go to work on some personality for my Crisis Suit team to fill the points. I’m taking votes and comments on which Crisis team members will hit the table as part of my initial Combat Patrol!  Below are the current ideas-

Remember, I need your input! Vote for your choice! Or if these ideas are all stupid, let me know in the comments below and give me a better suggestion.