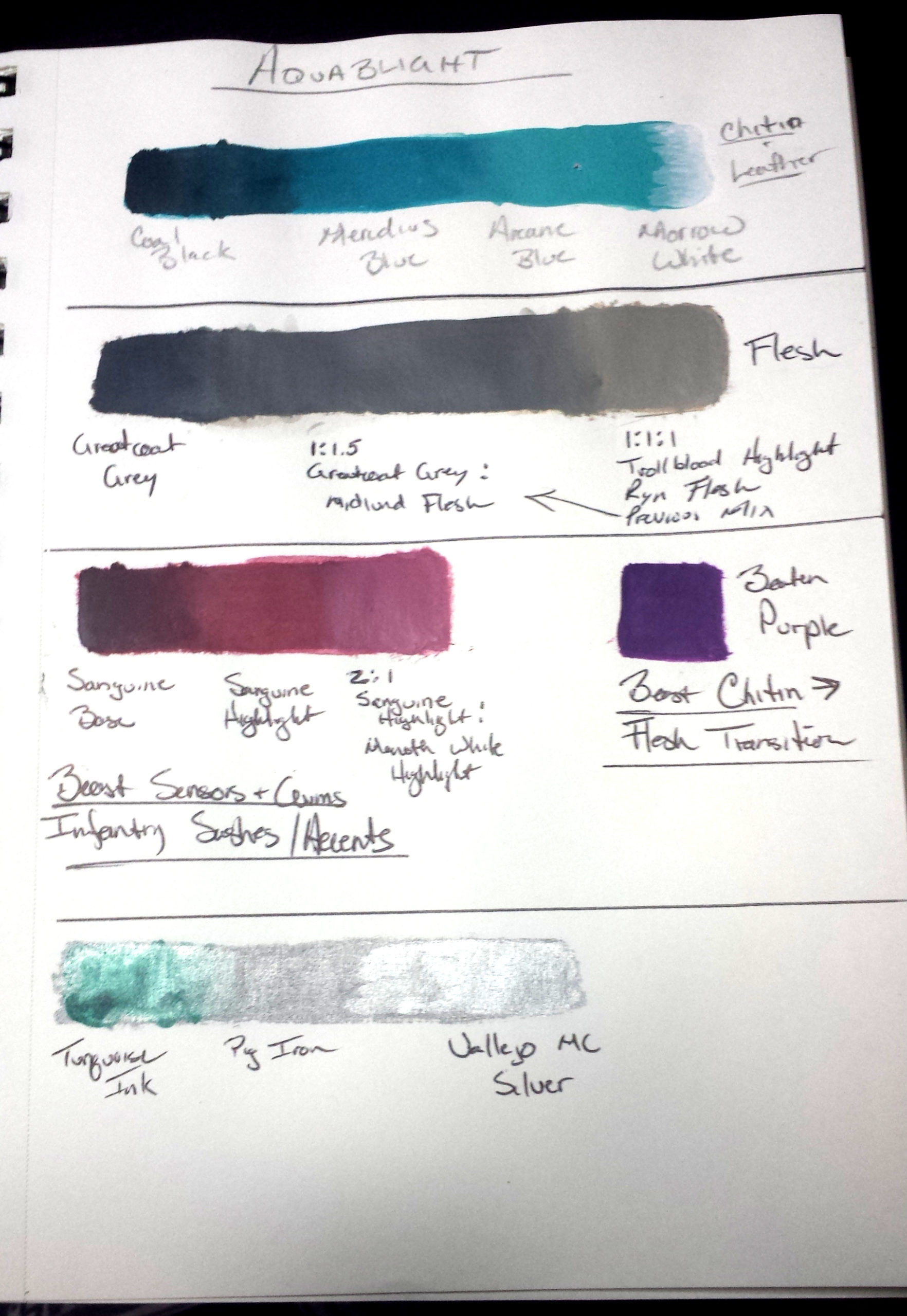 Suck it up, ‘zoid

I’m sick of playing with bare models, and I have as good of an excuse as any to get started:  There’s a 35pt, 2 List (D&C) event this weekend, and models must be primed with at least one color on them.

Can I get enough models primed, airbrushed and (hopefully) blocked out by Saturday?  I’m not sure, but over the weekend I assembled a Neraph (what a cool model) and played with paints until I came to some mixtures I like for my Aquablight Color Palette.  Getting these colors nailed down has been the primary issue with getting the iceberg moving again.  Well, enough is enough.  For better or worse, this is what it’s going to be. The armor chitin recipe hasn’t changed from the Scythean prototype I worked on months ago.  That was the one good thing that came out of working on that model.

The flesh recipe is about the same; it’s still grey mixed with flesh tones.  However, I finally found a base and highlight color that I like.  Despite being icy creatures, they’re still warm blooded, and I want the flesh to have a warm feel.  This not only conveys the fact that they’re living beasts, but the warm counteracts the cold feel of the chitin.  They don’t really give that feel in the picture, but they’re more flesh than grey, and have just a bit of warmth to them.

I sifted back through all the feedback on the Legionnaire trials, and most of feedback preferred the red.  Since it was my first option from the beginning, I decided to keep it, but shift it away from the core primary color red, and more towards a wine or sanguine feel.  Less natural, more blight-y!  I plan to use this for the skirts on the Legionnaires, sashes and weapon hilt wraps, etc.  It’ll be a unifying accent color.  On beasts, it’ll be gums, injuries, those sensor pads on the sides of their heads, etc.

I left the purple on here, since it’s such a fun transitional color to put between armor and flesh, but that could be too tedious, and might be too many colors.  The sanguine color may do well in that same place – I’m not sure.  Something I’ll have to try out.

Lastly, I threw together something to cover metals.  It’s based on my Lylyth1 resculpt and will work for now until I find something better.  Heh, looking back at her now, she has that same sanguine accent that I’ve come back around to ow, two years later.  Good omens?

After consulting the forums, I’ve settled on the two following lists to get me started:

This army is an armor cracking bunker of beast-y awesomeness. Spiny Growth + Dark Shroud gives a net +4 ARM to my front line beasties, and the Ravagore keeps the pressure on my opponent or lets me control the board with Scather templates. The tarpit and stew pot are staple units and can easily hold or contest a zone for a few turns if I need them to. This list is a colossal or armor skew buster.

This list is an anti-infantry focused counter to the Thagrosh1 anti-armor build. Lylyth1 loves quantity of attacks in order to get the most out of her feat. The seraph lets her do some interesting things with threat ranges that most won’t think of, and can offer her some interesting options when combined with bushwhack. The forsaken gives me fury management and some additional anti-infantry or anti-Hordes tech, and the Striders supply me with a nice shooting / jamming unit depending on what I need. Lastly, I play Lylyth1 all the time so she’s a very comfortable warlock for me. Her magic arrows will provide interesting lures for a potentially slipstreamed Scythean…

So, to field these two lists on Saturday, I need to get a fair bit of models painted!  They only need to be primer +1 color, but I’m hoping to have the colors all blocked out.  I’m not going to worry about shading or highlighting at all, just getting the color where it needs to go.  Additionally, I’m not going to re-use any of the original models I painted four odd years ago.  Everything’s getting the new P3 colors and scheme as done on the Scythean.

That means I can use my painted Lylyth1, Stinger and Seraph along with the half-finished Scythean and barely started Shepherd.  That leaves:

I’m not sure how much I’ll stop to full on write an article here about progress, but Twitter and Facebook will probably get updated fairly often, and I’ll probably do one larger update late Friday with an after action report on the tournament.