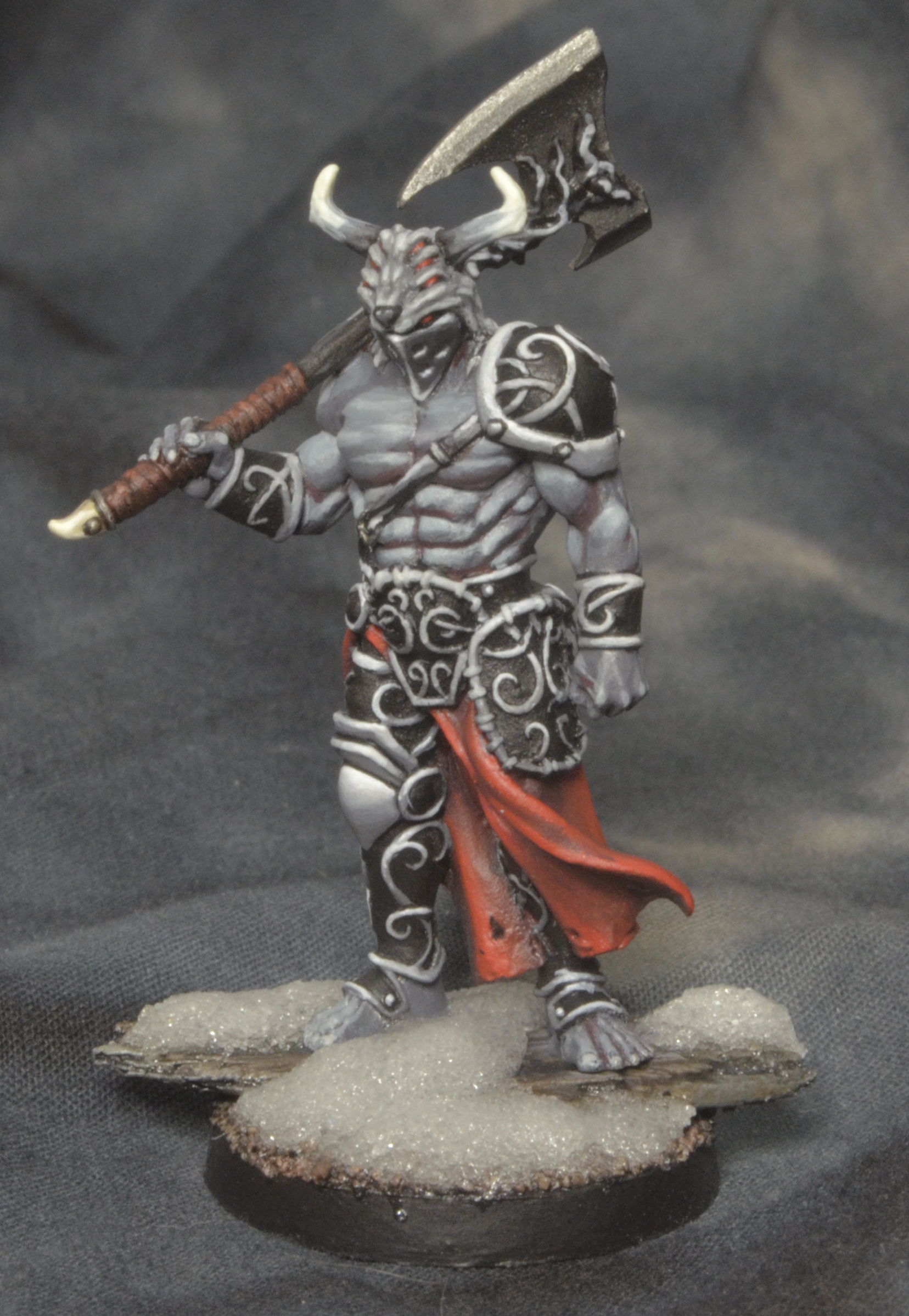 When someone approaches you and asks you if you want to paint an old Confrontation model, and they want to pay you to do it, you don’t say no.

This awesome Confrontation Red Karnagh model was a blast to paint, and there are some gorgeous paint jobs for it out there. It’s seemingly static pose radiates strength and menace and I was instantly smitten. The client had pulled some images from Google, and picked what he liked from them which was super helpful. He wanted a tabletop paint job that incorporated grey skin and a snowy-wolf pelt for the helm, and one of the sample photos had very stark contrast on the armor that he liked. The rest we figured out as I tried various things and the character took shape. 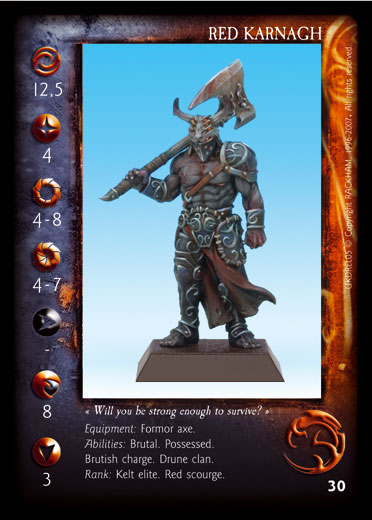 I had free reign on the cloak, so I went with red for a few reasons. One, this model will be for a barbarian in D&D, and as we all know, they often see nothing but red. Additionally, the pose doesn’t do much to convey the anger hiding within, so a little outward representation of that would go a long way. Lastly, I hadn’t painted red in a while, so I wanted to.

So, my starting point was the skin and the cloth. Those are the most internal points to the model, and it’s always a good idea to start there. I apologize for the terrible pictures, some of these were taken with my cell. As you’ll see, I also added some deep red as the shadow for the skin, further emphasizing the anger hidden deep inside the barbarian. 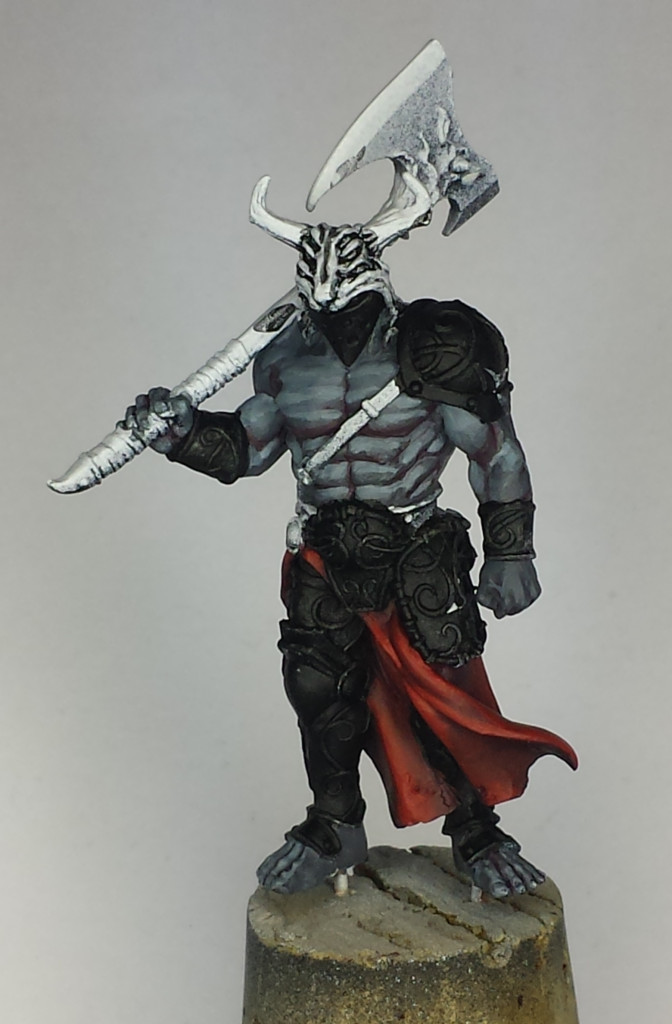 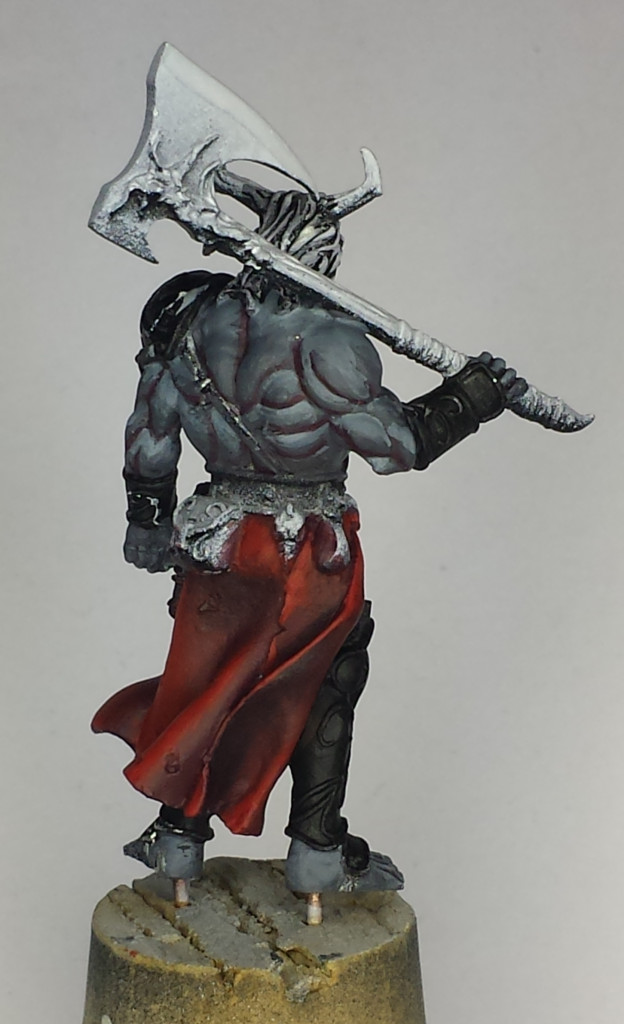 After getting confirmation that the red was OK, and the skin tone was good, I started in on the furry bits of the helm. We had originally discussed red eyes for the barbarian, and blue ones for the six eyes on the helm. I also put down silver lining on the armor, and took a pass at all of the leather bits using a very familiar recipe (GW Rynox Hide highlighted with flesh tones). 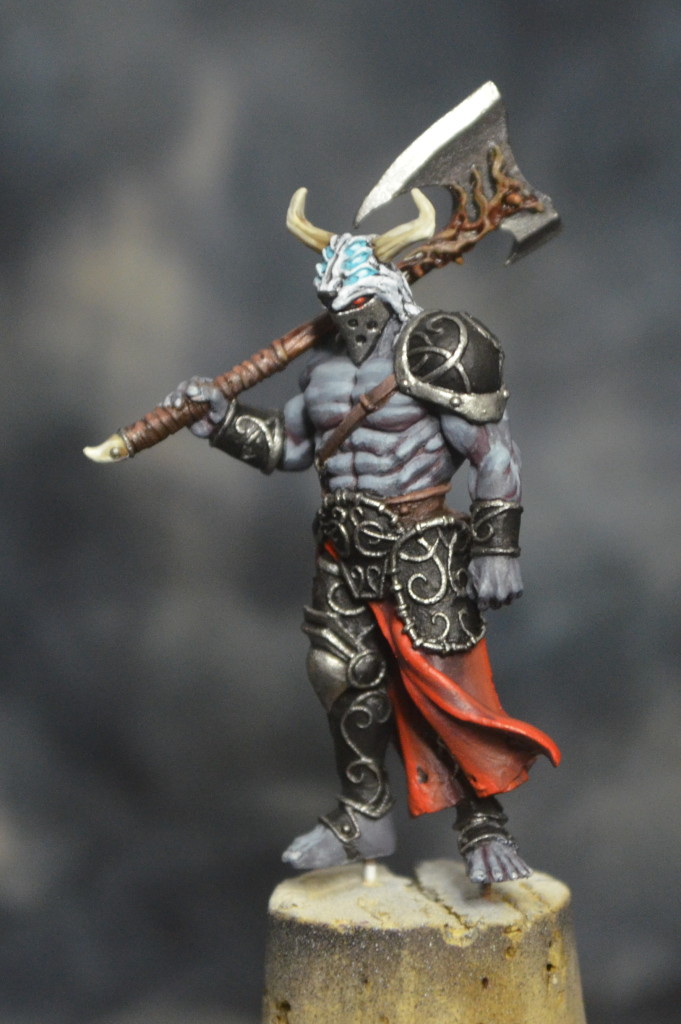 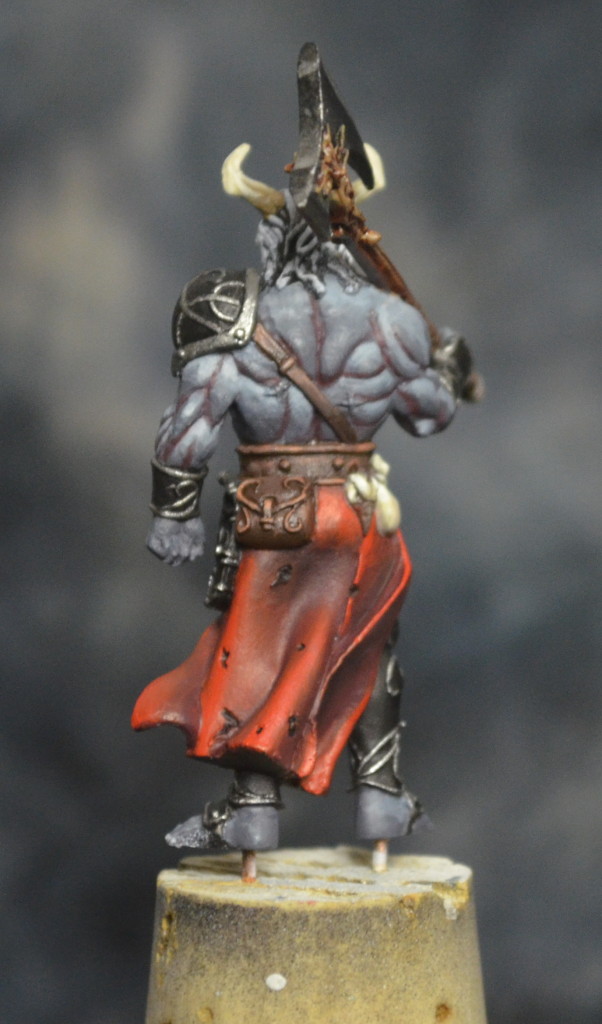 After bouncing these off the client, we made some changes. The brown leather was tossed in favor of having a uniform look across all of the armor and leather. See, I’d made the assumption that the armor was to be metal, when in fact it was a black heavy leather. Thus, metal wasn’t a good choice. We also decided to nix the blue eyes and go for more red on the helm, transforming it from an icon of the barbarian’s frosty northern heritage into a reflection of / a source of his power. I also re-did the fur, since the wash I was trying to use was just too stark. Lastly, I did a sample of the revised armor scheme to see if it was more in line with what the client wanted. 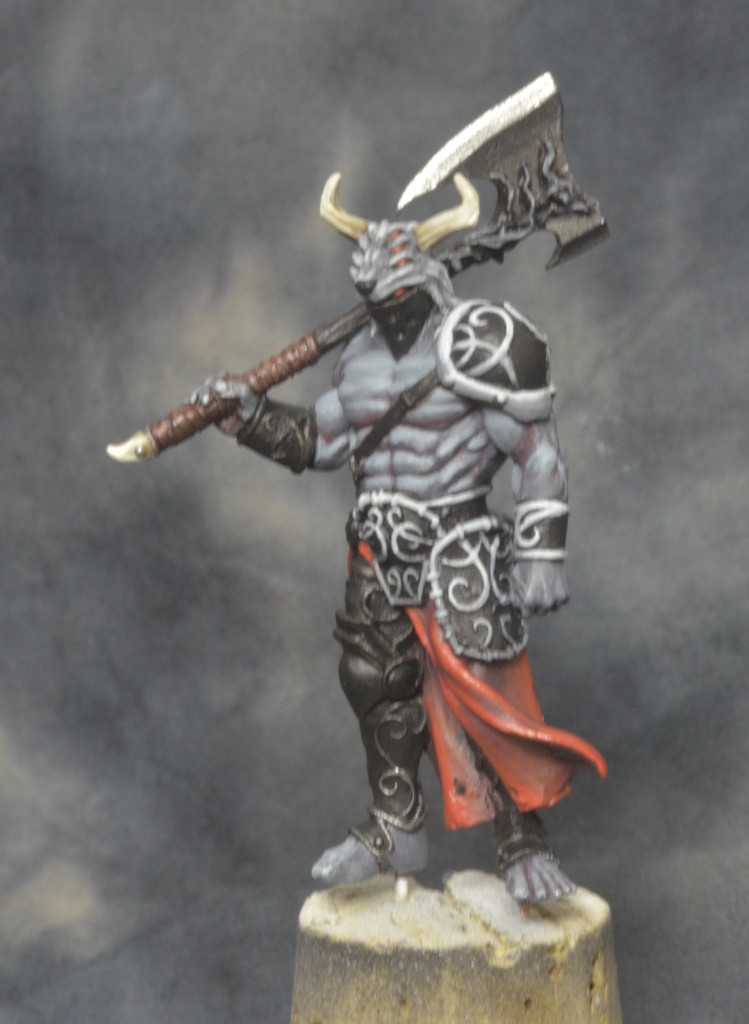 Turns out the new armor was right on the money, so off I went to detail all the armor bits. We made two other minor modifications: the horns went from a brown-to-cream fade to a black-through-grey-to-cream fade, and we made the axe shaft be made from black wood, not brown. Making the model devoid of any color other than red really made the red stand out.

In order to keep the nod to the barbarian’s frosty home, the base was made to look like dark rock covered in snow. I scrounged some wood chips from my yard and went to work on a simple base. Some crushed glass and water effects later and we have a finished model! 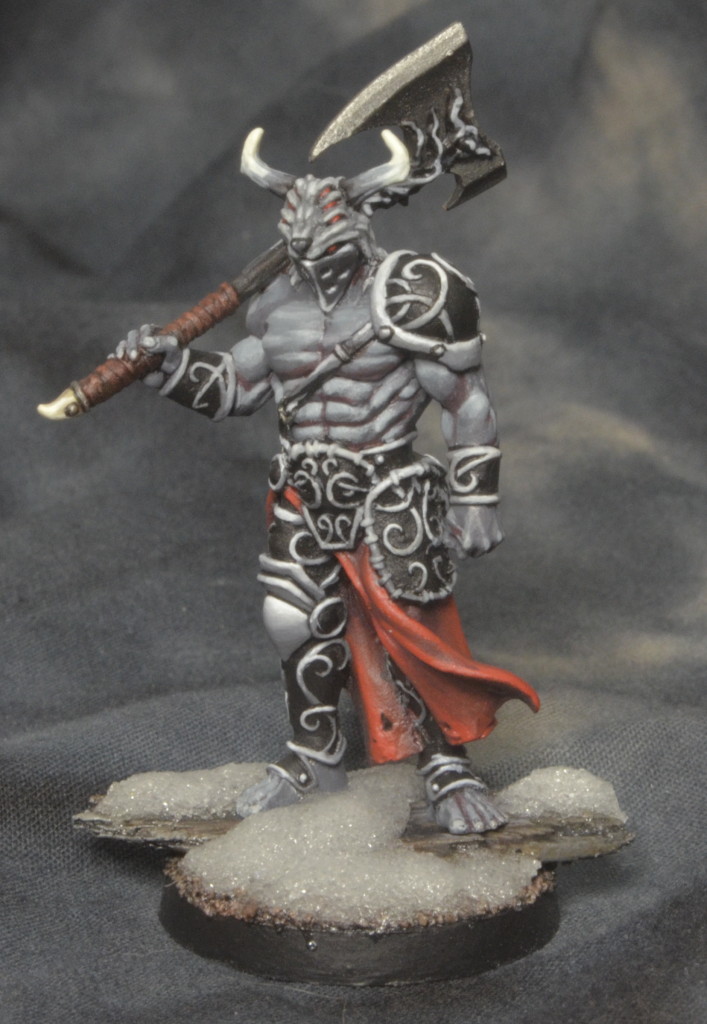 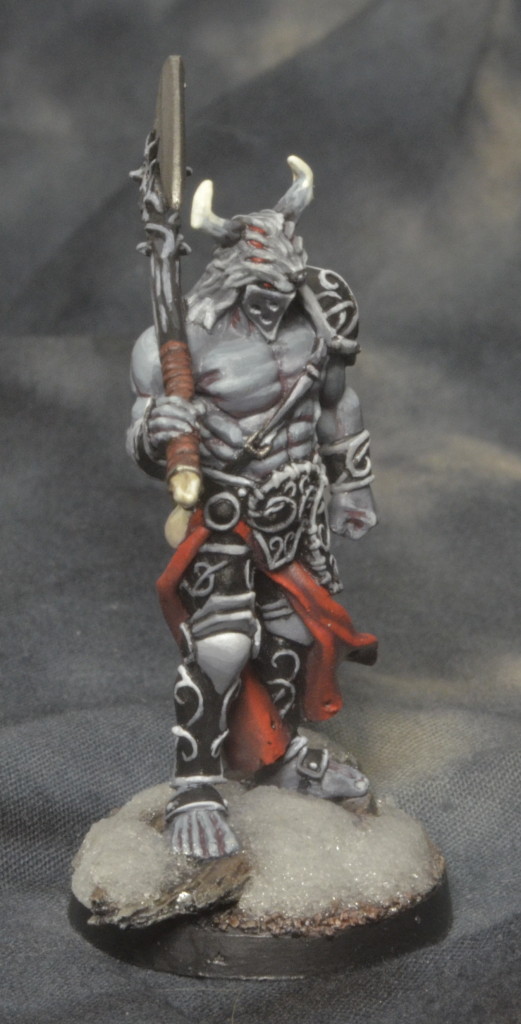 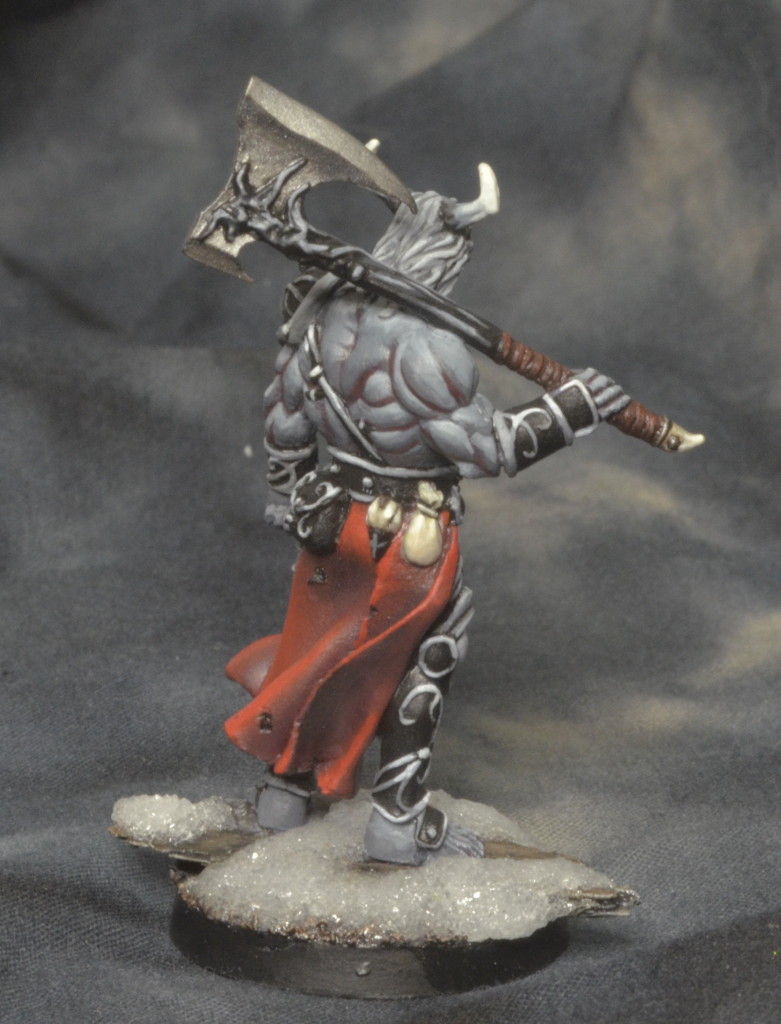