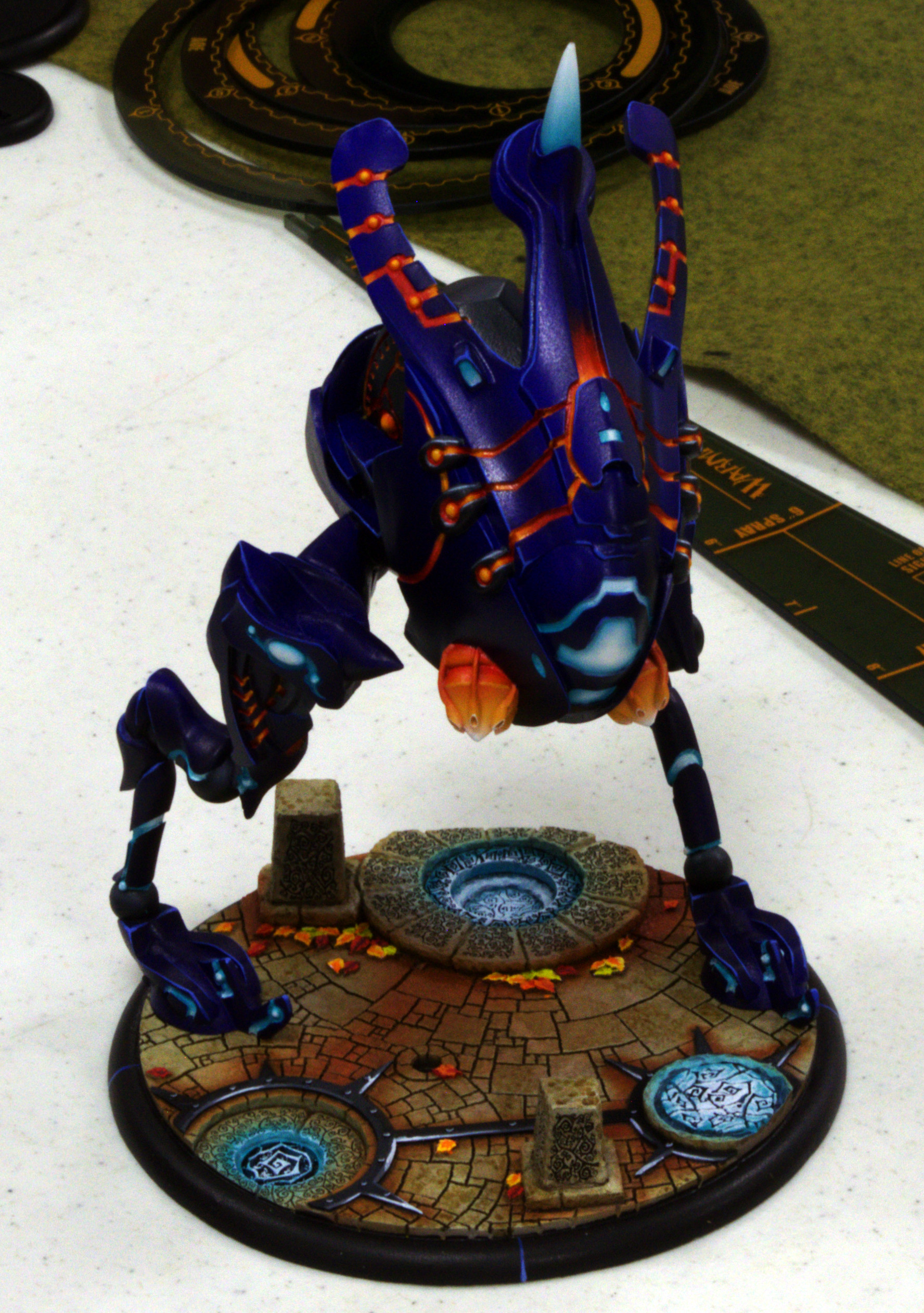 Note:  The blue armor seems to be horrible to photograph.  No matter what settings I use, the effect on the model isn’t being captured well.  As a result, they look somewhat flat and off in photos, but they look stellar in person.  I’m going to keep at it, but as reference, here’s the original model the method is based off, which shows the final effect nicely.

The second army in the Sunset Retribution collection features an Arcane Force Generator led by Ossyan, Moros and Hypnos. However, the client wasn’t going to be satisfied by the standard AFG model. So, I had the opportunity to do one of the coolest conversions in the Warmachine Comunity – the AFG Chicken Walker (AT-ST) build! 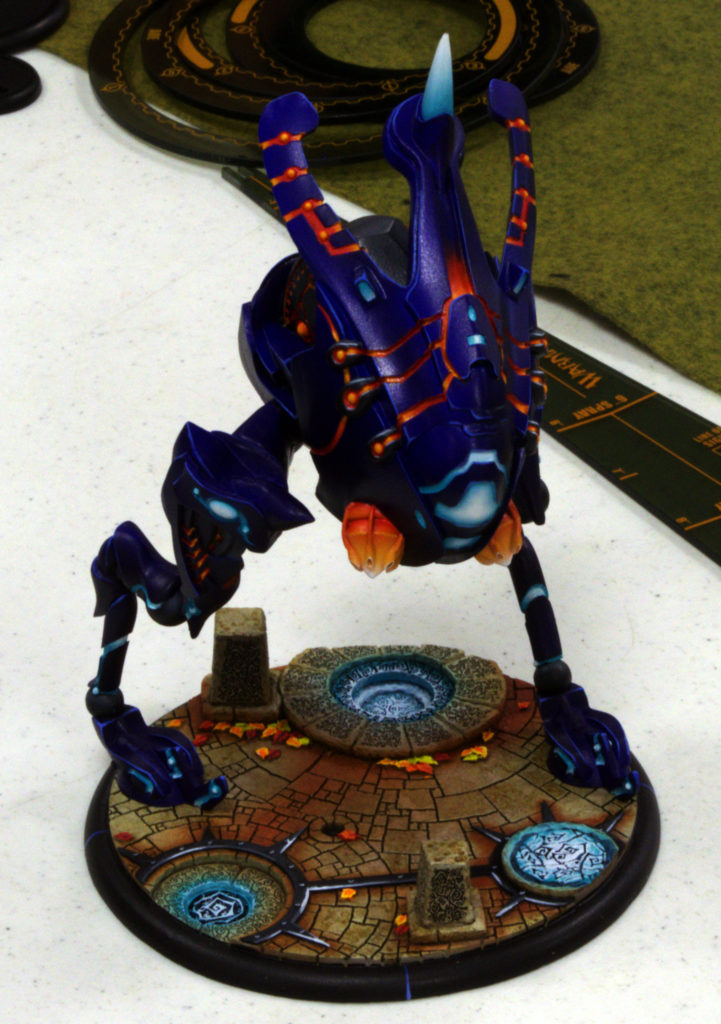 I have to say, this was a killer conversion and was a blast to work on.

The one thing I didn’t like about all the other AT-ST conversions I found was how static the model looked.  The legs seemed to always be standing straight, and the ‘head’ looking dead ahead.  In order to give the model more life, I angled the legs so it looked like the walker was turning, and I turned the head in the same direction and had it face down a bit, as if it’s shooting at poor, helpless humans below it. 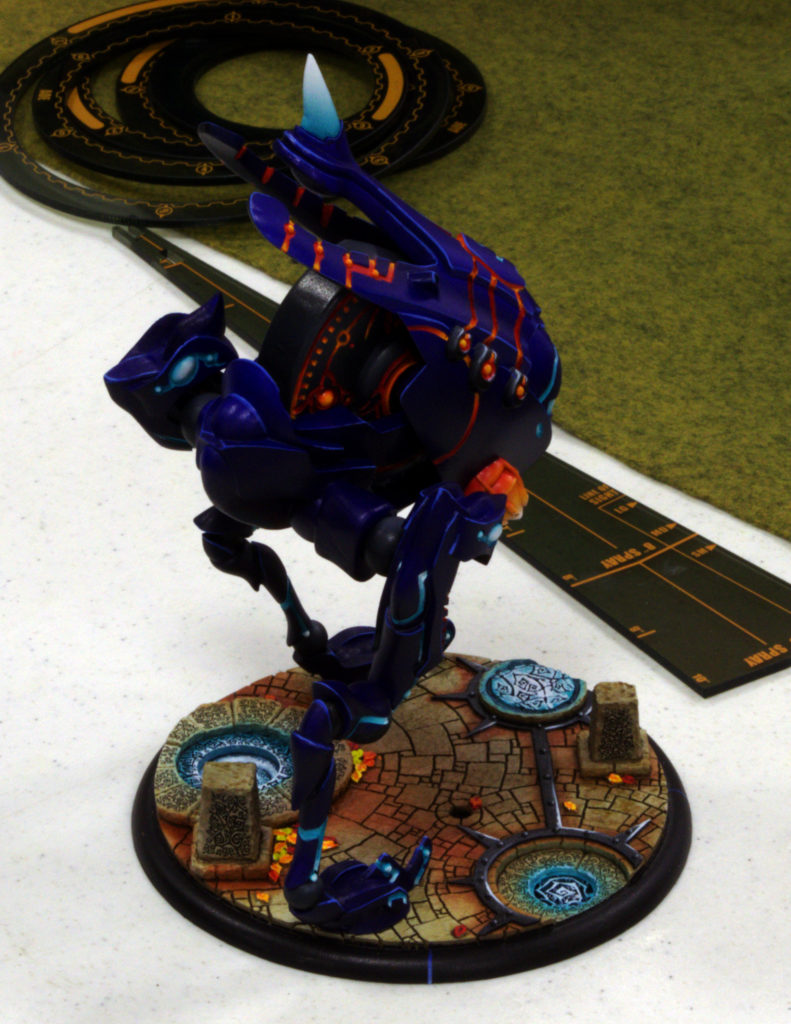 The client wanted Ossyan’s forces to be primarily blue, so the AFG got a mostly blue paint job.  However, I really wanted this thing to look angry, so I put down the hot orange glow onto the weapon system, power plant and the inner workings of the legs – everything that makes it move or shoot.  To counter the heat and allow the model to fit into other armies, I used the blue glow for everything else – the legs, the antenna on top and the ‘face’, where a pilot might sit.  The result is a bit of interplay between the hot glow and cold glow, which creates the feeling of a creature that’s barely contained or at war with itself.

The rest of the army features some new solos and units; most notably two Heavy Rifle Teams and two units of Stormfall Archers.  The HRTs were fun to paint because their rifles are just so cool and elaborate.  I made sure to distinguish between the black metal for the barrels and the orange armor / casing.  The difference in contrast between the two really helps the eye grab the ornate shapes of the gun from a distance. 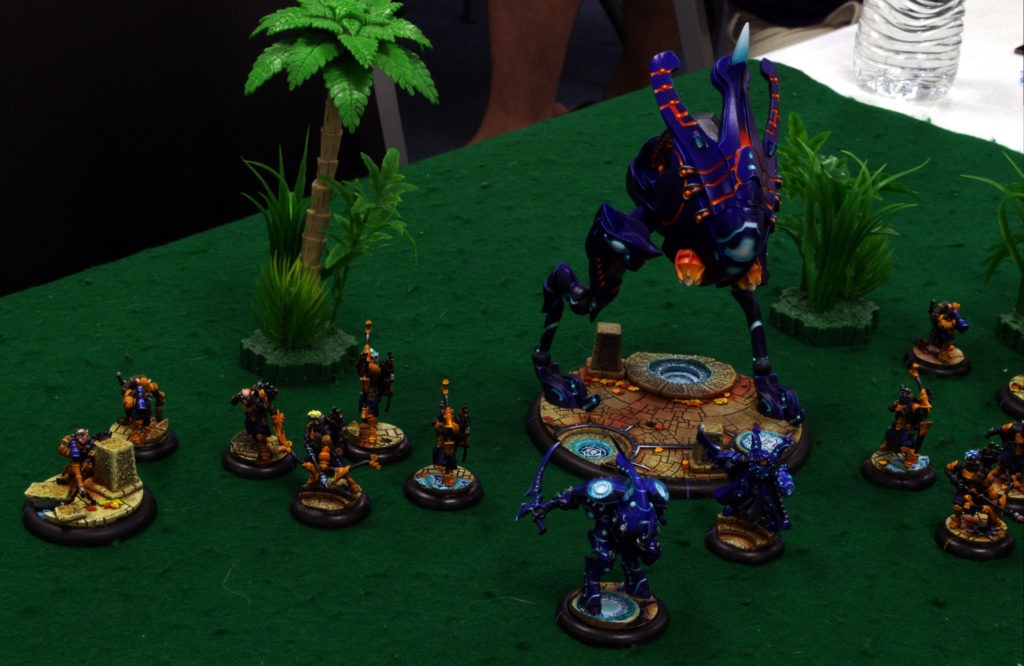 The Stormfall Archers were time-consuming, but they came out looking fantastic.  Orange armor, blue pants and black leather combine to give them a suitably fancy and elaborate look befitting magical bowmen.  To portray their many shot types, the arrows in their quivers were painted with either orange or blue glow, and the two models in each unit with an arrow drawn had the arrow heads painted glowy, too.  Because magic, that’s why!

Moros and Ossyan got a blue on blue treatment.  Moros, because he’s stealthy, and Ossyan because it’s what the client wanted.  They both turned out nicely, and Moros’ eleventy-billion exhaust vents were rather cathartic to paint one by one.  It certainly doesn’t hurt that Moros is just a gorgeous model, too. 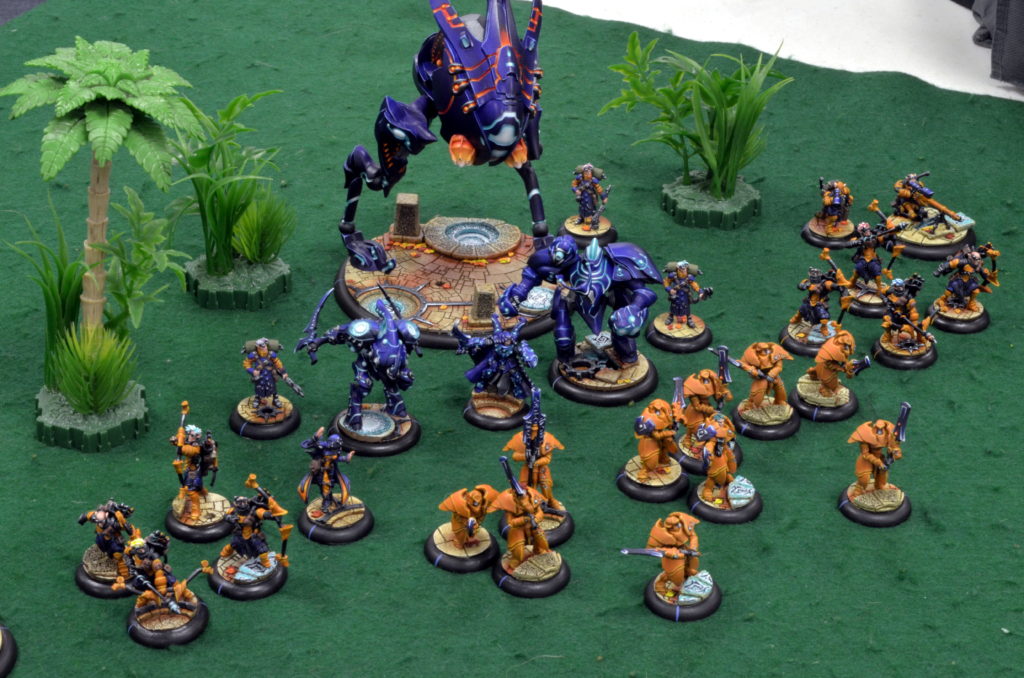 The army looks great all together, Sentinels at the vanguard.  However, this list isn’t in theme, so some Ellowuyr Swordsmen, a Banshee and Fane Knight Skerryth are on deck to be painted so they can be swapped in for some free points.

In the mean time, enjoy some pictures of Army #1, in action: 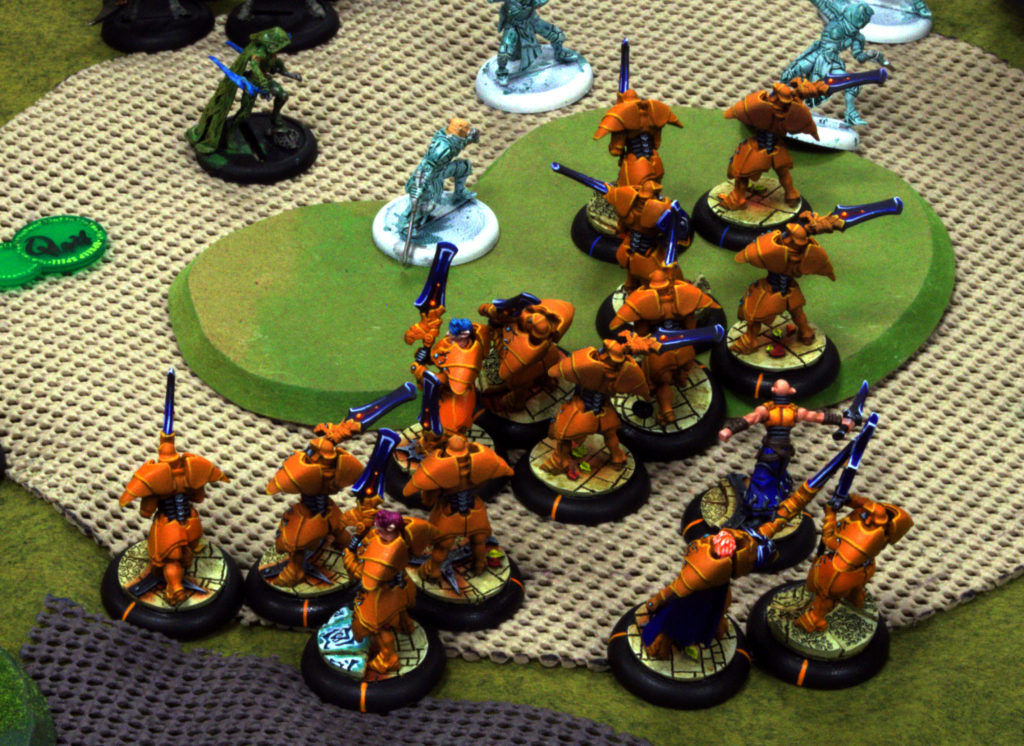 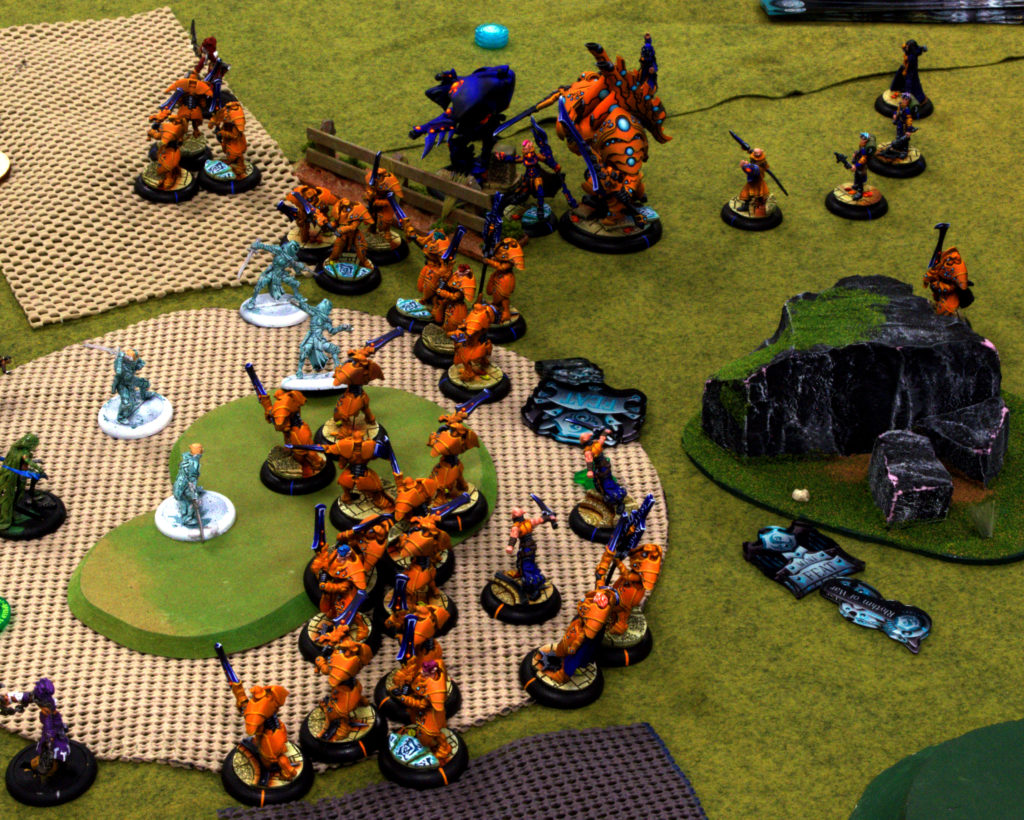