For the next several weeks, I’ll be opening an M14 booster pack and discussing the contents in terms of use during a booster draft type event. Once I’ve gone through six of them, I’ll be examining them in the context of a Sealed Event, making a 40-card deck from 6 boosters. 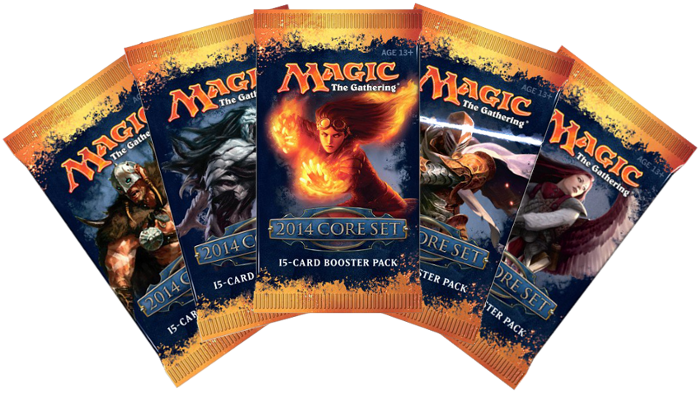 My first pick here would be [card]Chandra’s Outrage[/card]. After my last Draft experience, I can appreciate the power of removal.

[card]Chandra’s Outrage[/card] is a fantastic piece of removal, dealing four damage to a creature. That’ll take out a sizable creature on its own, or help a smaller creature take out a big blocker when your opponent least expects it.

What makes [card]Chandra’s Outrage[/card] more than just removal is the two damage it also deals to the creature’s controller. So not only are you taking out one of your opponent’s more potent creatures (hopefully), you’re also taking out 10% of their life. Not too shabby.

This is a toss up between [card]Act of Treason[/card] and [card]Sengir Vampire[/card], and it would probably depend on what I had already drafted.

If I was into red already, then [card]Act of Treason[/card] is a unique form of temporary removal, in that it shifts a creature from my opponents side of the battle to mine. This can take the wind out of your opponent’s strategy, let you steal a nice ability on a creature for a turn, or force your opponent to block their own creature. By attacking with your opponent’s creature, you force them to block it. If you chose the creature you steal wisely, you can give your opponent nothing but bad choices: kill their own creature, chump block and lose a smaller creature or take damage from the creature you stole. There’s a lot of utility from this card, but it’s usefulness is heavily dependent on what your opponent is playing, which isn’t ideal.

If I were working with black, then [card]Sengir Vampire[/card] is a solid choice. At 4/4 with flying, it’s a good deal for 5 converted mana. In addition, it gets pumped whenever it deals damage, which is cool. I’m trying to come up with more to say about it, but really, this one’s just about simple math. The card speaks for itself: it has evasion, a good power and toughness, and it has good value.

[card]Tome Scour[/card] is a decent choice in this format, I think. Especially if you have a way to bring it back or copy it. In Draft and Sealed, the decks are small enough that five cards can do some damage. I wouldn’t look into this card unless I was already invested in blue, and I had ways to get this card back from my graveyard. [card]Sensory Deprivation[/card] is a form of removal. If the creature you enchant has power three or less, then it’s effectively out of commission. Unfortunately, if your opponent can get rid of enchantments, then it’s rather pointless. [card]Gnawing Zombie[/card] is not a bad play if you’re playing a weenie deck (something full of lots of small creatures) or something that will let you bring stuff back from the graveyard. That’ll let you use it’s ability to pull life from your opponent and put it into your total. [card]Mutavault[/card] is great if you can pull it out first turn. It’s also incredibly efficient since it’s 2/2 for just one mana. The problem I see is that most people will have creature removal, and when it’s in creature mode, then it’s vulnerable. When that happens, you’re now out a land!

[card]Angelic Wall[/card] if this came around late in the draft and I’ve already invested in white, then this isn’t a bad choice. It’s cheap at 2 mana, and blocks with toughness 4. It’s a solid early game creature, and will protect you from early attacks. [card]Shiv’s Embrace[/card] has a high cost at 4, but gives out +2/+2, flying, and the ability to pump the enchanted creature. You better have lots of land to use this, or be playing the long game. I think it’s a decent card in a constructed deck, especially if you have a way to cheat the mana curve and get lots out fast.