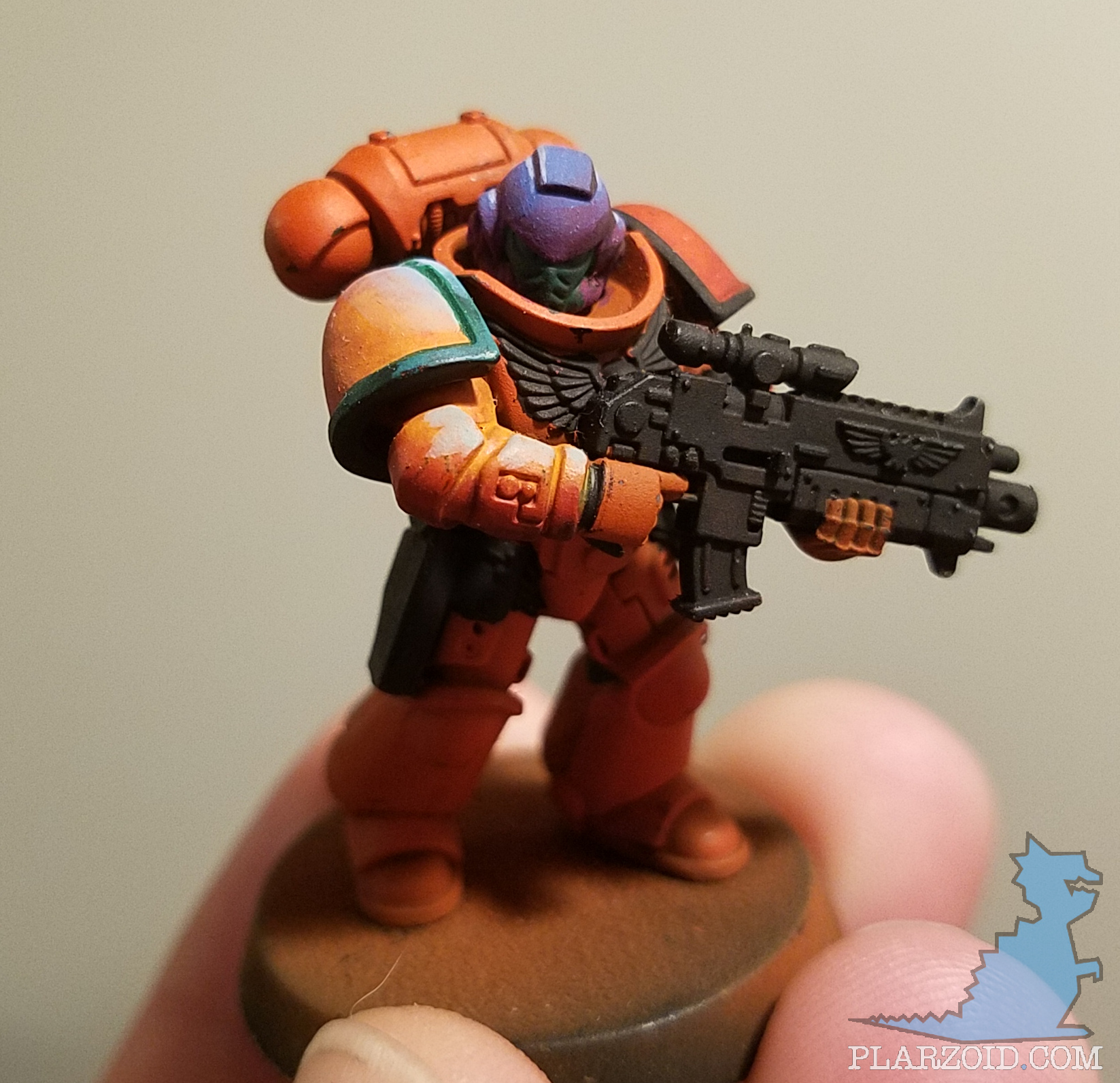 Day 3 of the con is usually the busiest – it’s Saturday so there’s no requirement for you to take time off work to attend, and it’s also the start of the family friendly events.  For me, it’s when the lack of sleep starts piling in and I start to slow down.  I only had two seminars on Saturday, but they were two of the ones I was looking forward to the most…

Sam’s class was a blast.  He’s incredibly talented and still enjoying discovering new things, and this seminar was less structured and more of a showcase of Sam’s current process and style.

There were maybe ten of us in the class, and we all sat and watched Sam work from scratch on a large zombie model from Zombicide: Black Plague.

We joked, laughed and learned.  Sam spoke about the things he enjoyed learning about from other painters and teachers, and shared his thoughts as he works through a model.

Despite being one of the most unstructured classes, I think it’s the one class that produced the most notes in the small notebook I had.

We geeked out about color theory, painting textures and surfaces, and made loads of crude painting jokes.  It was a blast!

Roman has been teaching classes at NOVA for the past four or five years, and I’ve taken a class from him nearly every year.  He enjoys innovating and trying new teaching styles and topics, and this year was no different.

Roman taught a three day class this year in the days preceding the con.  That class covered everything from building scenic bases to color theory and how to apply it to miniatures and I’d assume loads of Roman’s great thoughts on lighting and how to apply it for great affect.

The class I took from Roman was all about that last bit – using color and light to create a dramatic effect on a model.  Roman walked us through some examples of his work that used these ideas, and then executed them on a bust during a demo.

Both Sam and Roman are capable of painting freely and emotionally, and it shows in the highly evocative nature of their work.  What’s amazing, too, is how quickly they can do it.

This is an aspect of painting that I plan on exploring soon.  I’m becoming increasingly aware of how badly my compulsions to paint cleanly and as perfectly as possible is impacting not only my speed and progress on projects, but my enjoyment of the hobby.

But that’s a topic for a whole other article…

By Day 4, I was truly tired, and it was a blessing that my classes were in the afternoon.  I was able to sleep in a bit and chill with buddy Zac while we toured the gaming halls, vendors and took in demos.

Breachstorm is a small skirmish sci-fi game that’s currently being Kickstarted.  Zac and I sat down to play a game and had an absolute blast over the hour while we learned to play and generally goofed around with Trevor, one of the game’s creators.

The two factions we played had very different play styles, but both fit the game’s mechanics nicely.  In the end, Zac’s zealous cat-folk overpowered my shooty marine dudes.  The game requires rolling loads of dice and manages somehow to play easily and quickly while maintaining plenty of tactical depth and variation.

The two factions we played were fun and interesting, and the additional ones that are planned sound equally interesting and unique.  Zac and I both enjoyed the game, and I highly recommend checking it out, here, and back the Kickstarter, here.

I have been familiar with True Metallic Metals for a while now, it is my preferred style for doing metallic parts on models.  This class was largely a way to cement my understanding on the concept, pick up new ideas on the topic and learn from someone I’ve not yet taken a class from.

Vince was incredibly knowledgeable on the topic.  He’s tested every metallic paint made around the globe, and knows exactly what works best and what doesn’t.  Every time we asked about a particular product, he knew right off the top of his head what he liked or didn’t about it.

Vince’s execution of TMM is top notch, and I attribute that to his deep interest in mastering the look and all the research he’s done.  We had a chance to use his preferred materials on some swords and weapons he had prepared for us, and I was very happy with the results.

I also loved how Vince conducted the class.  Some seminars are demo or lecture only, others like this were hands-on.  Vince dove right in after a brief overview of the technique, and constantly was walking around and checking in on us to give feedback and encouragement.

After having tried them in class, buddy Chris and I both dove onto Amazon to pick up the paints and inks we used – we were both supremely impressed with the products Vince recommended.

Color theory is a concept that never seems to go out of style when it comes to hobby seminars.  This class was billed as color theory for wargamers, and that’s pretty damned close to what it was.

I’ve attended color theory classes from a few painters, and each one is different – I learn something new every time.

For instance, I’ve learned about all the normal aspects of the color wheel and various ways two colors compare to one another (complementary, analogous, etc) but Alfonso had a way of talking about color that made sense in a completely new way.  He pointed out the differences between our traditional concepts of color and the true color wheel, and he spoke about ways to narrow down and generate color ideas based on the tone and mood of the piece we were working on.

Then, we discussed how to apply those ideas and concepts to building a paint scheme for wargaming armies.  It was a really cool way to urge us to push away from the boring and simple studio schemes and apply some higher thinking to the armies that fill our normal day-to-day painting time.

I happened to be wearing my neon orange NOVA Open SuperNOVA 2018 shirt that day, so I chose to work on an orange space marine.  I tried shading and highlighting the base orange with colors other than those in a close relationship with orange.  I shaded with greens and purples and compared that to shading with deep reds.  I highlighted with bright yellow and green, as well as a sky blue.  All of them are far more interesting and evocative than the normal, default colors we always reach for.

Which is why I’m so very excited about Kill Team, and the opportunities it presents for small, highly thematic armies.

More on that next time, when I conclude my thoughts on the NOVA Open 2018…