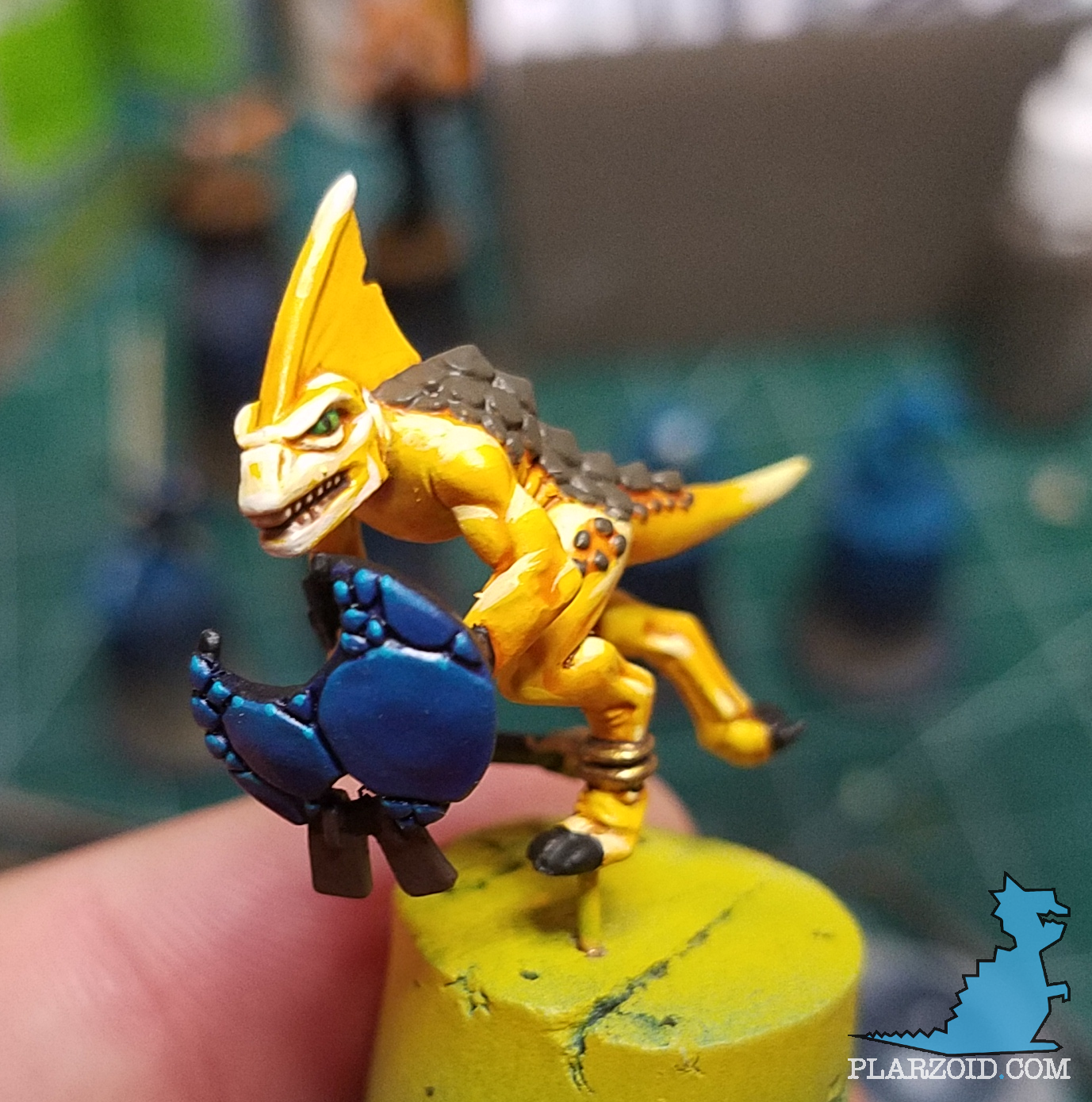 So, I love dinosaurs.  Ever since I first saw Jurassic Park, I couldn’t get enough of them.  So, now that I’m an adult and into tiny toy soldiers, OF COURSE I’m into tiny toy dinosaurs.

I’ve been sitting on a Start Collecting: Seraphon box for a while, and when some local buddies wanted to get into Age of Sigmar by way of Skirmish and then Path to Glory, I was all in with some SPACE DINOSAURS!!

When considering taking on work as a dinosaur commander, be sure to start small.  For me, this was a unit of ten skinks with shields and blowdart guns.  They’ll be a harrassment force to soften up whatever my larger saurus decide is most appetizing.

Once assembled, I was stumped.  I didn’t want to do the studio scheme of blue / teal dinos and red shields.  It’s overdone and not very interesting.  So, I sat on ten skinks for several weeks while I researched what other folks had done.  Turns out, not a lot of deviation from the norm.

I consigned myself to the studio scheme.  I airbrushed the skinks teal, used the P3 teal ink as a wash, and even got as far as airbrushing the shields red…

However, I just really didn’t like giving up the idea of being different.  I put them away for a bit and decided to do more research for inspiration.

As I dug through loads of images online, I noticed that in nearly all instances, the smaller the dinosaurs, the lighter their coloring.  Also, I found that most deviations from the studio scheme kept the concept of cool-colored dinosaurs and warm-colors shields.

So, I thought about inverting that – warm-colored dinos and cool-colored shields.  If I were to keep with the idea of lightest colors on the smallest, that put me at yellow…

The eternal struggle with yellow is how to add contrast without making it look dirty.  Luckily, the GW orange wash, Fuegan Orange, does this really nicely.

Some green eyes play off the yellow nicely, and will tie into my plans for brownish-green back scales.

For the shields, the obvious choice for strong contrast against the yellow is purple, however I wanted all of the shields to be the same color across all sizes of dino – they would be a unifying element in the army.

So, I went with blue, leaning into aqua.  They’re called “Star Bucklers” or “Stardrake Shields”, so I decided that playing on a deep blue would call on a night-sky kind of concept.  I only have one shield completed at this stage, but the others have recently been re-airbrushed to blue, since I like how the first one turned out:

So, that’s where I’m at on my SPACE DINOSAURS OF LIGHT AND GOODNESS.