I sit now, in a very cold hotel room in the wastes of the great north. After seeing to my Press Gangery duties, I checked-in to the hotel, freshened up, and hit the Iron Arena floor.

My first opponent was none other than PG_Northblade, Captain of the Good Ship HobbyHysteria.com.  He was playing a Legion of Everblight theme force (Thagrosh1) with two units of Warspears, three heavies and some minor support.  I had unpacked and brought down my 50pt Khador force. 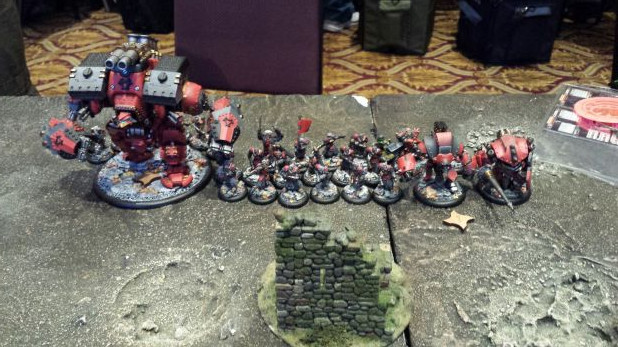 I, for some reason, messed up my mental math while pulling out models, and forgot Gorman.  Why, on earth, I had included Reinholdt, I’m not sure.  I obviously hadn’t remembered that the Butcher has Terror, and freaks out the little guy.

Anyway, I played the two games of the day 2 points down, I also got to play rainbow riches cozino. 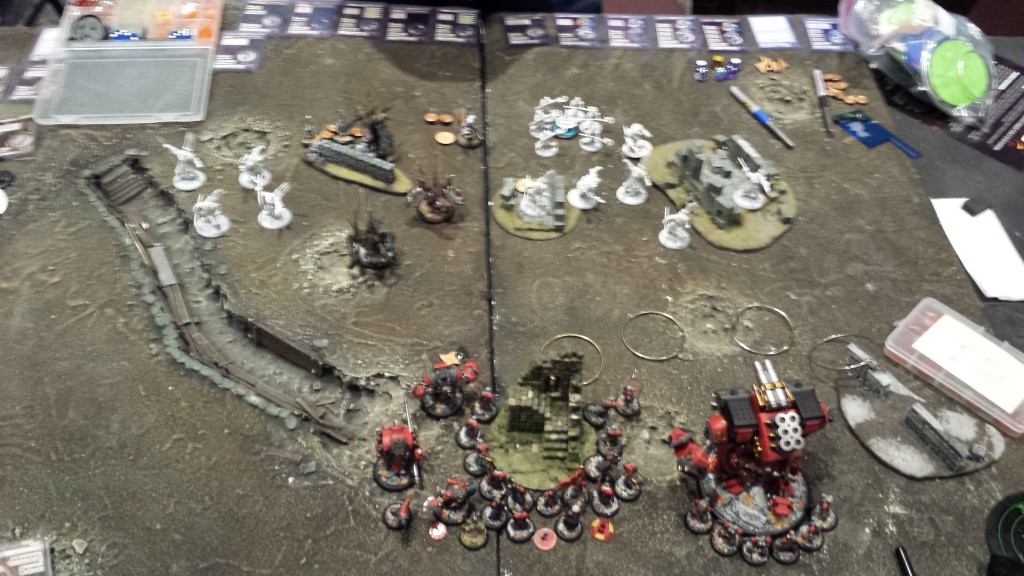 This table was treacherous.  I didn’t want to deal with the trench, and there was an obstacle right in the middle of what I was doing, and had to spread the WGI around it.  I forgot to take more pictures of this, since Northblade and I were interrupted numerous times with technical issues and phone calls and long lost friends, but it was incredibly enjoyable, none-the-less.

At the end of it, Conquest, Butcher and a few remaining WGI were facing down two Carniveans (one brought back by the feat), nearly a full unit of Warspears, and some very angry pot stirrers when Conquest managed to get a Critical Devastation off on Thagrosh, doing significant damage and knocking him down.  Some shoulder cannon shots, and it was over.

Right after Northblade and I finished, Chadi wanted to try out a list idea against Khador’s armor, so I happily obliged.

He was running Kaya2’s theme list, with one of each warpwolf backed by a gorax, a unit of druids and a unit of Warpborn Skinwalkers with UA.  Of course, the list also had two units of those pesky doorstops. 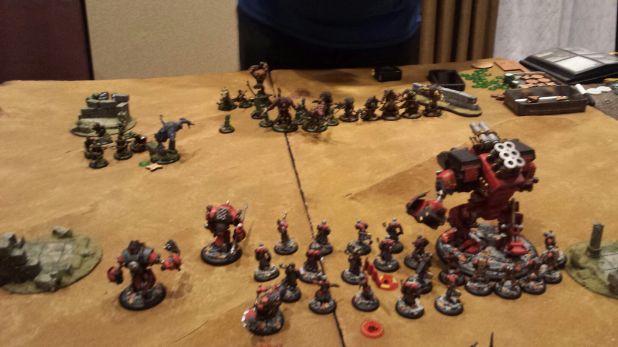 I advanced into the center, spreading out to mitigate the reach on his models, and to help get ready to meet his charge (since I know it’s coming).

His warpwolves do their thing, and rip the two heavies on the side to shreds.  The Warpborn Skinwalkers take out half of the Conquest, but the good ol’ Mechaniks keep it running.  The Skinwalkers force a Command check on the WGI (since they had boosted hit rolls last turn, not fearless) and they Fail!  (despite the re-roll from the Standard)

Kovnik Joe says none of that now, and gives them fearless, while Butcher loads up Conquest, keeps up the Iron Flesh protecting the WGI, and pops feat.  A bunch of sprays and a side sweep from Conquest later, all three Warpwolves are hurting badly, and only one Skinwalker remains.

The Warpwolves take out a bunch more WGI in retaliation, one gets shoved into Conquest’s way, and one gets teleported to safety via Kaya2’s feat.  Long story, short, the Mechaniks keep repairing just enough to keep Conquest fully functional while warpwolf after warpwolf gets fed into Conquest’s whirling fists. 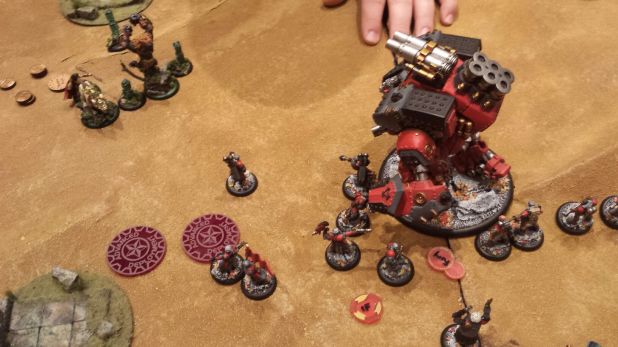 At this point, Chadi decides he’s going to make me work for it.  The Mechaniks keep fixing like champions, and the Conquest is fed the Gorax. 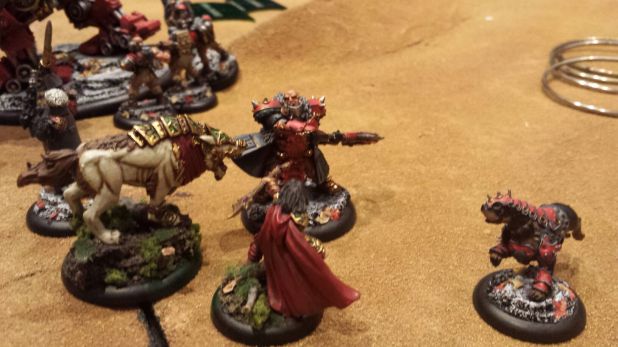 Eventually, Kaya2 uses Laris to teleport into melee with Butcher, and she just can’t quite take him out.  Butcher does his best, and it takes everything he has to kill her.

And that’s it for today.  I realize that two games in one day doesn’t sound like a lot, but each game took nearly two hours, since we were chatting and goofing around, or we were being interrupted.

I’m hopeful to get more games in tomorrow, I have quite the uphill battle if I’m going to earn enough Iron Arena points to bring home another piece of signed Concept Art.