is an asymmetrical card game in which one player is a massive corporation with secret agendas and the other is a hacker out to steal their secrets and spoil their plans.

The Corporation player has an Identity card that gives them a unique bonus throughout the game, a deck and a discard pile.  These three items create the three “core” servers that the hacker is trying to get into.  The Corp player defends these with pieces of ICE, like firewalls, dead ends barriers and secret agents designed to stop the hacker at all costs.

The corp creates remote servers, protects them, and installs agendas which get advanced over time.  Once they reach critical mass, the corp player scores them for points.

The Runner builds up their hacking rig, installing components that protect them from cyber and real attacks by the corp, and various programs and viruses they can use to tear down or get by the defenses put up by the corp player.  The runner has five health, represented by a 5-card hand size.  Whenever the runner would take damage, they discard a random card from their hand.  When they take damage and can’t discard, they die.  Some damage is permanent, and reduces the size of their hand.

There are four corporations and three hacker groups.

Weyland Corp is a bunch of space mobsters, if you will.  They own “the Beanstalk”, a space elevator to the moon.  They have lots of hitmen, but specialize in attacking the hacker’s revenue stream.  This is often at the expense of taking some bad publicity, which actually helps the runner’s revenue stream, so that’s an interesting balancing act.

NBN is a massive news corporation, and they specialize in running traces and tagging the runner, which makes it much easier to “reach out” and do bad things to them.  Lots of their stuff relies on or gives out tags to the runner.  Traces are a fun mini-game, that involves the corp bidding an amount of money to make the trace happen, and the hacker having to decide if it’s worth paying that amount to cut the trace, or taking the tag.  Either way, the corp’s money is spent, so the corp can’t just go all-in.

Has-Bioroid (HB) is an android manufacturer, and has the best ICE in the game.  They are all about having lots of nasty defenses that they let the runner impale themselves on.

Jinteki is a corp that manufactures clones, and have an Asian feel.  They attack the hacker by tracking them down in the real world and trying to kill them.

The Anarchists are a hacker group that is all about causing chaos, just because they can.  They like viruses, but can struggle with resources.

The Cyborgs want to steal all the best technology for themselves, and see hacking as a means to an end.

The Shapers are tinkerers and enjoy the art of hacking.  They hack just to see if they can.

I picked up the core set before heading to Templecon, after just one game with local Zach G.  I know GdayBloke is a huge fan, as are a few of his locals, so we all wanted to play some at Templecon.  Since I was just getting in, we restricted decks to just the core set.

I struggled with Deck construction, mostly out of ignorance and wants to play all of the things.  I had an easier time making up my Corp deck.  I looked through each faction, picked out the cards I thought were the best / coolest and then counted them up.  I went with the deck that had the most cards, and then inserted the ones I couldn’t live without from all the others.

Here’s my corp deck, over on cardgamedb.com.  It focuses on using Traces to get Tags on the runner, which let me do thing to them, like sending a Private Security Force after them, or destroying their cash pool.  I used my “influence” to get some cards from Weyland, who don’t mind doing dirty things, like severely harming the runner. 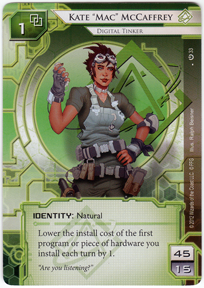 My runner deck was easier to make, since I liked the feel and flavor of the Shapers, who are tinkerers and do things just to see if they can.  Their cards feature lots of unique pieces of hardware, or custom mods to hardware. My deck used loads of cards from the Criminals which let me find what I needed fast, or force my opponent to do things they didn’t want to do.

Chris and I got two games in.

We played the first game under the assumption that each player started with three credits (which was wrong, it’s five).  I got two pieces of ICE and three agendas right of the bat.  I protected my two core servers, and we were off.  Unfortunately, I basically never drew another piece of ICE the rest of the game, and before I knew it, Chris had thieved all my Agendas whereas I had only scored one Private Security Force.

Game two went better for me.  I was able to get a Mining operation up and running, scored a Private Security Force early, and then lured Chris into a trap, putting several tags on him.  It took him a few turns to get rid of them, which bought me time to set up a secondary remote server with a Breaking News agenda in it.  I scored that, used Scorched Earth to destroy the four cards in his hand, and then used my third action to use my Private Security Force to kill the hacker.

That was all we were able to play, but it was rather fun.  Chris had some of the chip tokens from Broken Egg Games, and I can’t wait to put in an order for some, they look fabulous and offer a lot more to the look and feel of the game.

I have since picked up the first two Expansions, What Lies Ahead and Trace Amounts.  Inside Trace Amounts there was an exerpt from a book, which I’ll be investigating, for sure.  I plan to slowly accrue all the expansion packs from my LGS until I’m caught up.  I’m trying to make sure I do this slowly so I don’t end up drowning in all the options and combos that are available.

In the mean time, I have all my cards stuffed into one 400ct cardboard card box, wich definitely won’t be big enough.  Do any of you have any ideas on storage for Netrunner?  Do you have a custom rig, or do you use one of those 1,000ct card boxes with dividers?

Tell me about your decks, strategies and card storage!

Tools of the Trade