Wednesday nights are game night for me, and this week was Week 1 of the Journeyman League. The NOVA Nomads packed the house, with 5 games going non-stop all night, with probably 14 people in the shop, which is quite a few for us.

Since I’m a PG and unable to win any of the leagues I run, I usually pair up people and facilitate games instead of playing myself, since we have limited space.  As a result, I taught two players how to play Netrunner while they hung around waiting for a table to open up, and got one game of Warmachine in.

I was the runner both games, and in both cases I was able to or would have pulled out a win before we packed up.  Both games used my two Core Set only decks.

Netrunner Game 1 was hardly fair, since I helped Ron figure out how playing a Corp worked, and thus knew where most of his stuff was.  He also fell into the trap of my NBN deck, in that he had next to no ICE the entire game.  As a result, I made lots of runs and was able to score quickly.  he had fun though, and a Core Set is already en route to his house, so he and I will be playing again very soon. 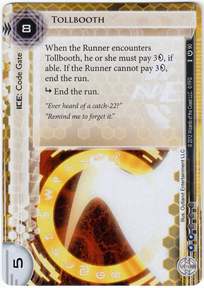 Netrunner Game 2 was against Kevin, who is a SysAdmin, and is a networking and computer guy, so as soon as I tossed him the premise of the game, he was hooked.  This game lasted a far bit longer, but probably would have been faster if I had properly explained that Kevin needed to advance and score agendas to win.  Kevin had about two layers of ICE on all of his servers, one being a Tollbooth, and gosh, did that hurt.

I continuously had money problems, I think most of my money cards were near the bottom of my deck.  Kevin bankrupting my accounts after he got a tag on me didn’t help either.  Thanks to Wildsyde, though, I was never lower than 5 cards in my hand, so I survived the one time Kevin hit me with Scorched Earth.

By the time Kevin had a table and opponent, I was at 5 points, had just learned about a 3pt Agenda sitting under ICE I could beat on the top of my turn, so we called it.

Having played both decks a few times now, I definitely feel that my Corp deck needs more ICE, and my Runner Deck needs a way to get it’s console, ASAP.

I did manage to get a game of Warmachine in, against Adam, of Khadoran Machine Never Breaks who was playing his fledgling Kreoss1 Pop’n’Drop list.  Adam had Kreoss1, a Reckoner, Vanquisher, Redeemer and Repenter.  He also had full Errants + UA, full Zealots + UA, min Choir, two Vassals and the Errant solo.  It turned out to be a really tough army to crack.

I deployed Hark, Black Ivan and the Destroyer on one side, WGI in the middle, and Behemoth on the far side of the WGI, with the Greylords on the far left.  Adam put Errants and Heavies front and center, Repenter on my right (opposite Hark) and the Zealots opposite the Behemoth and the Greylords. 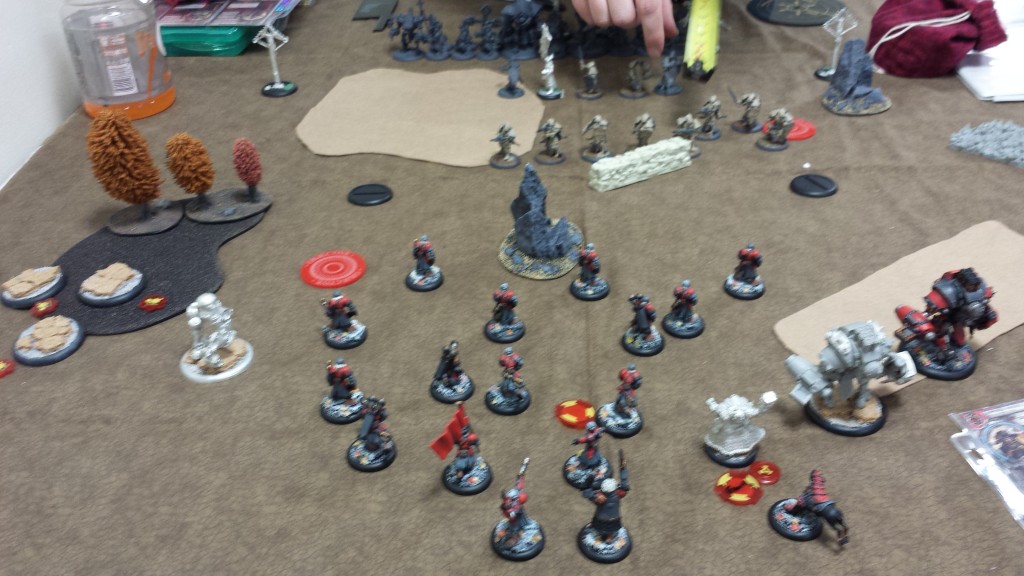 Turn 2, I had lost some WGI, but that’s what they do when there’s no Iron Flesh around.  Hark parked himself on a hill, Broadsides’d and put Fortune on the WGI, upkeeping Escort from last turn.  The shells from the ‘jacks didn’t do much, but I did manage to clip a few zealots and take out 2 before triggering their +4 ARM.  A lucky drift took out a choir boy.  The Greylords rode up, sprayed the zealots taking out one or two, and then light cav moved behind the woods for safety.  WGI shot, Joe toughed them, but not much died.  Walks and shots from the ‘jacks. 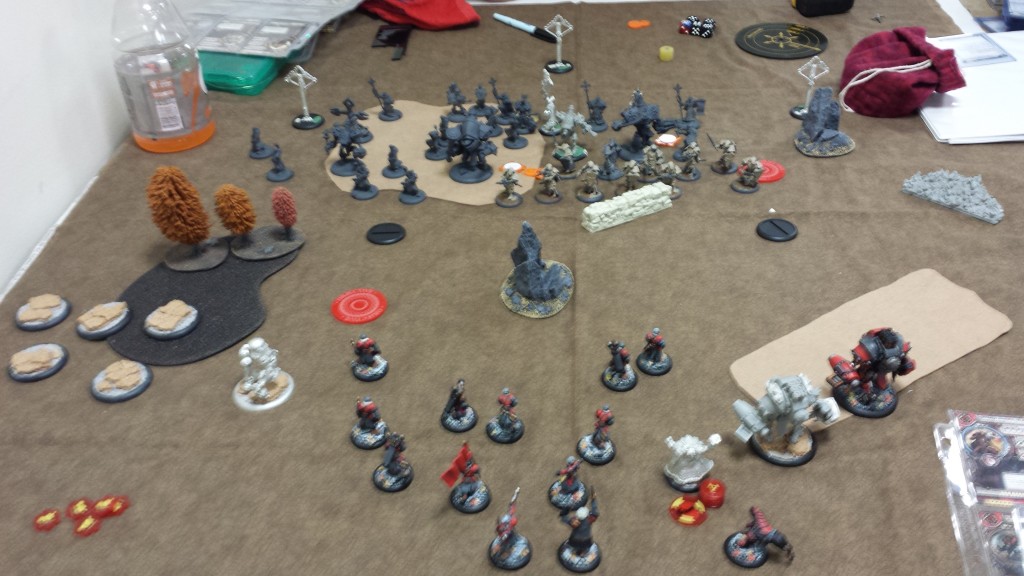 Lost of my stuff died on Adam’s turn, including lots of WGI and a few Greylords.  Some good shots on Hark took from the Vanquisher and Errants took him down to 6 health.  Ouch. 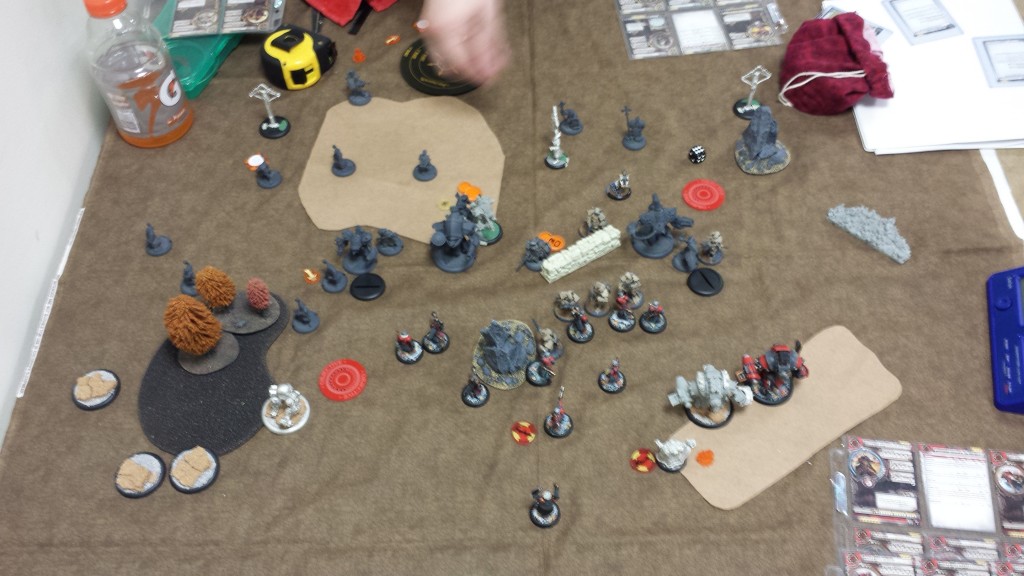 I bear Strength’d the WGI, they charged to little effect.  Surprise, surprise, I guess.  At this point, it was after 10 (when the store closes), so I feated with Hark and fully loaded Black Ivan to hopefully take out the Vanquisher, and went all in.  Hark tried to help clear a lane for the Destroyer to hit the Vanq too, but couldn’t crack the Defender’s Warded Errant Armor.  he did walk over and get the Behemoth back in his CTRL, so it could take advantage of the feat.  The Destroyer failed to kill the Errant on his walking-in feat shot, so missed his charge.  Black Ivan also failed to kill the dude, but made it in, and put the hurtin’ on the Vanq.  I boosted the Hit rolls, looking for crits, and got it on the second swing.  Vanq lived, though.

Then, I threw the Behemoth at the Reckoner, and with no focus (but a free charge), killed it in two hits.  That was pretty sweet. 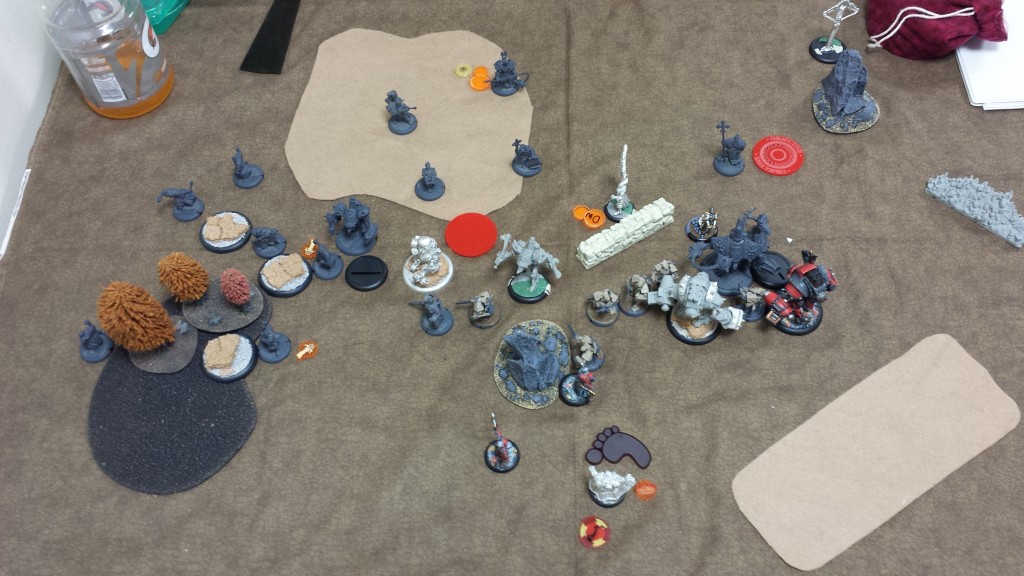 Then Harkevich died and the game was over.

Read about another battle, between Mike’s Cryx and Justin’s Retribution over here on Mike’s blog.