Local Warmachine player, friend and all-around awesome guy, Andrew M., recently inquired about commissioning some Khador models. He was only interested in Tabletop quality, and he had a fairly clear vision of what he wanted the scheme to convey. 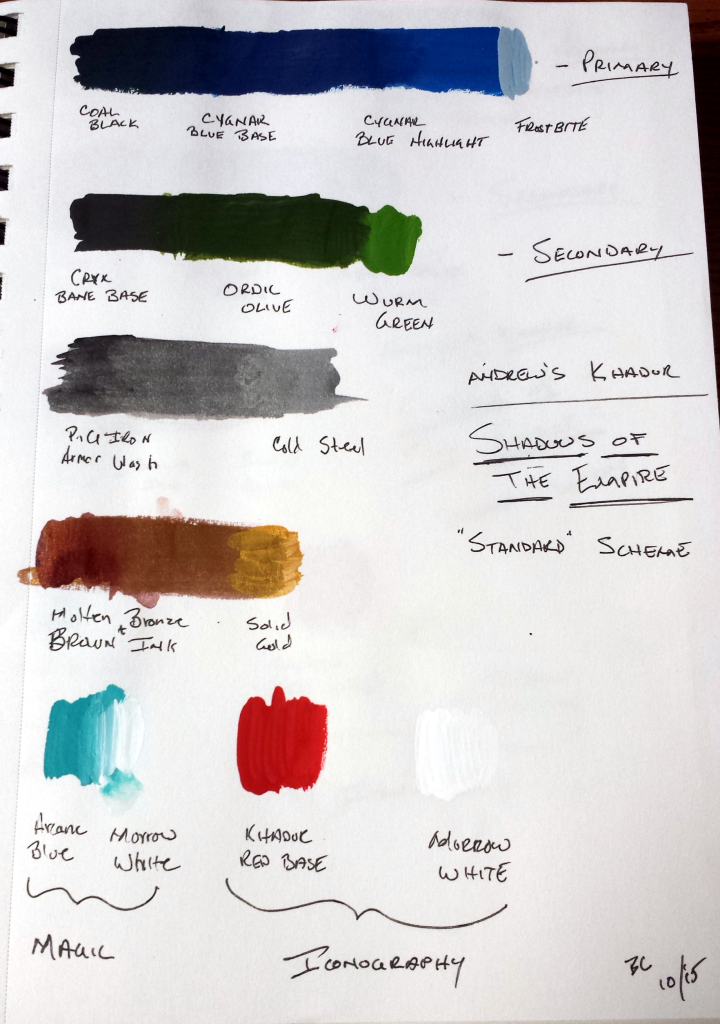 Andrew’s Khador army has been dubbed, “The Shadows of the Empire”, and the scheme is designed to feel dark and imposing, embodying the unstoppable juggernaut from the frosty north. This is conveyed with dark blues for the primary color, and a very light blue as the edge highlight. Having a bit of a WWI / WWII feel was important as well, reinforcing the militaristic nature of the Khadoran Empire. To achieve that, a dark green was added as a secondary color, and white and red were chosen for iconography. Lastly, to reinforce the northern cold feel, Andrew wanted cold magical effects, so we pulled out the old stand-by for magicks, Arcane Blue.

Andrew and I spent a good long while on the scheme, but we wanted to see how it would do on an actual model.

So I painted one. Andrew supplied the Spriggan (already assembled and primed, and I hauled in all of my painting gear, including my airbrush. I quickly ripped the spriggan off it’s base, and flocked it with my usual gravel mixture (railroad flock in 2:1:1 Fine:Medium:Coarse). After dropping a pin into each foot and cleaning the most offensive of the mold lines.

I airbrushed the main blue color (shade -> mid -> highlight), utilizing a bit of masking tape to separate the little shield over the head from the rest of the main body panel. i then two-brush blended the shadows on the more vertical panels on the either side of the chassis. From there, I laid down the shade color for the green, and then the base color for the silver metals. Next was the brown undercoat for the bronzes. From there, I added the green highlight, the bronze main color, and the washes on both metals. The last effects were the bright edging and attaching the ‘jack to it’s base (which had been dry brushed with grey by then).

All told, the entire thing took about three hours, including the pinning and flocking.

I’m very happy with the results, which I feel firmly achieve tabletop, if not above tabletop. The main thing that keeps it on the border for me is the couple mold lines that I missed and ended up being rather obvious, so I think an extra 10-15 minutes to check for those would be worth it for future efforts. Here’s an example: Also, I apologize for the picture quality, I only had my phone, and I let Andrew take home the ‘jack (of course). Terrible quality aside, here’s a few more shots: Overall, I really enjoyed this exercise, and I think Andrew and I were both very happy with the result.

However, it just now strikes me that I may have accidentally used Gnarls Green instead of Ordic Olive for the green bits… Oops.