I’ll be attempting to live tweet the Keynote, for what it’s worth.  I’m sure you all will be watching the live broadcast, or will watch it once they upload it to YouTube.  What I really want to mention, is that I’ll be doing my best to tweet and post about:

Near the end of the day (or first thing the following morning), I’ll try and wrap up the day in a blog post / pic dump.

If I should happen to have any videos, they will be uploaded to…

You can find it here: http://www.youtube.com/user/paintwithplarzoid

This is not going to be just a repository for random videos like the old one in the past.

This is new and improved, and linked to the website’s Google+ page, and is a necessary step in the natural evolution of blogging.  Having a Google+ page and an attached YouTube channel is a prerequisite for hosting live Google Hangouts, and then archiving the recordings.

Subscribe now, so you can be the first to know when videos get uploaded, or when live events kick off.

A while back, I ordered some branded measurement widgets from Advanced Deployment.

Along with a whole lot more… 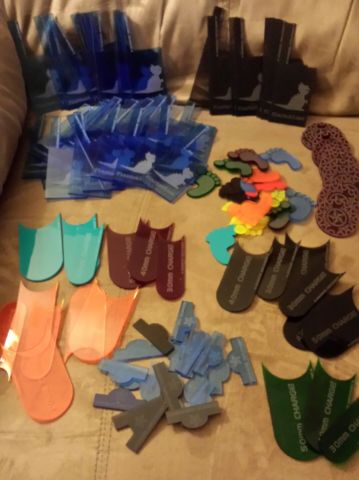 I have a ton of widgets, charge lane markers, feat tokens, 50mm blanks (objectives, or proxy bases) and mini-widgets.

As I mentioned on twitter, all of these are traveling with me to TempleCon, and I’ll be giving them away to folks who play me in games in the Iron Arena.  Find me on the gaming floor, or tweet me to see where I’m at and when I’m free.

For those not attending Templecon…

For those of you at home, I’m donating four of the blue Plarzoid widgets to Ron over at Mini Army, Huge Time Sink, for him to give away in his quarterly drawings.  You can enter these by participating in his Paint the Target series.

Whatever I have left after the con will be used for more contests and shenanigans right here.