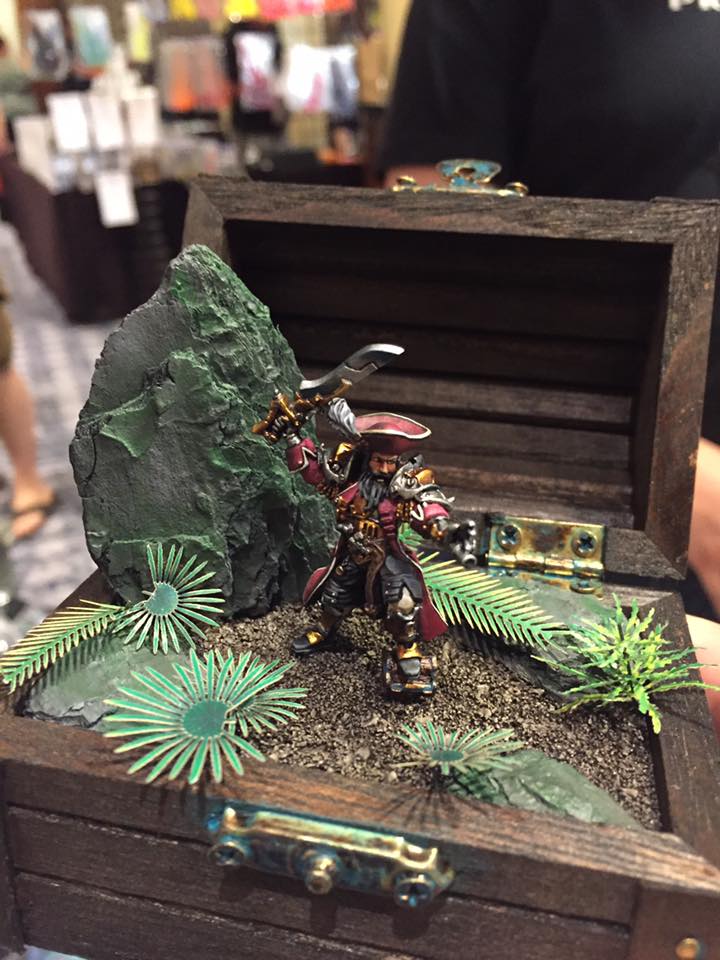 I look forward to the NOVA every year. The staff are all excellent, the location’s just 10 minutes from my house, and the painted models in the display cabinets are gorgeous. What more could I ask for? How about awesome hobby seminars all four days from Justin McCoy (Founder, Secret Weapon Miniatures) and Roman Lappat & Raffaele Pica (Massive Voodoo). Let’s also not forget Jessica Rich, who paints for nearly every mini manufacturer out there (like Reaper and Dark Sword, to name a few). I took six (6) classes this year, with at least one from each of the four teachers.

I started with a class with Roman, on blending. Roman’s blending isn’t the type of blending that you’re used to. For starters, he works with only five colors on his palette. Red (magenta), yellow, blue, black and white. That’s it. He mixes all of his colors on the fly. This lets him shift colors around as he builds shades and highlights, which lends him an infinite number of steps between one color and the next. He’s also big on saturation / desaturation, and saving white until the very end of your highlights. In his class, we matched a pot of paint we were given, we painted wolves by mixing the colors we saw in the photo and painting directly onto paper and then we painted on a model.

Roman likes using texture as part of his style. When we got to paint a mini, I picked a Tyranid, and wanted to create mottled skin and streaky armor. Again, all the colors were mixed by hand from primary colors, and then thinned down and applied to the model. This was really fun, since I could shift the magenta into purple for the shadows, and towards a more pinkish for highlights. The green was easy to shift towards blue and yellow for shades and highlights.

My next class was “Tits & Ass, The Art of Painting Hot Chicks,” taught by Jessica Rich.  Her method of painting is at the opposite end of the spectrum from Roman’s.  She uses standard pots of paint, and stick to them religiously. While Roman paints with thicker, opaque paint, Jessica uses super thin glazes to shift colors and build up highlights and shadows slowly.  The class was a riot, rife with crude humor and innuendo, but all in good fun and often egged on by Jess herself.  She shared lots of good know-how about painting the female form, like how to play up or play down certain muscle groups to achieve a muscled or slender figure.  Also, highlight the tops of boobs and butts, not the front and back.  Don’t ever paint nipples pink.  That sort of thing.

Right after Jessica’s class, I had another one with her on freehand patterns.  Since we had 45 minutes between classes, I stuck around and helped her clean up and prepare, and then we just sat and talked about painting in general.  It was cool to have some one-on-one time and muse about painting, commission work and the con.

In the Freehand Patterns class, Jessica set a short-term goal of paining a fleur-de-lis.  We started with the central orb, then added the wings, and then added the line and dots below.  We practiced these shaped repeatedly on watercolor paper.  Then, she moved the goalpost, and had us paint the fleur-de-lis in a pattern on a medium-blue background.  Since there was only five of us in the class, she ran it almost like five one-on-one sessions, bouncing back and forth giving each of us focused advice on what we were doing well, and what we were doing well.  After we had the pattern down, she showed us how to add more stuff to the space, to make it look like cloth, and add embellishments.  When we were done, it looked super complex and intimidating, but really, it was just a series of repeated shapes, and lots of layers of detail piled on top of one another.  Here’s a picture of my pattern next to hers.

Day one closed out with a long awaited purchase: a KR Backpack 2.  I have two large card cases for my Legion, and I’m tired of having to carry them separately.  Now, I can combine them into one backpack, along with the gaming stuff that go along with them.  This will free up my Plarzoid tote bag for alternate games and other goodies.

I focused my classes this year on freehand, flesh (but not faces) and weathering; all things I felt I was weak on.  Friday started with a 4-hour class on freehand painting with Raffa.

He had these cool little shields for us to work on, and had put together a four-step process for painting a symbol from Skyrim onto the shield.

It wasn’t long before we had the orange and white stripes on the shield, and we were called up front to see how Raffa was going to deconstruct the dragon into something easy to do.  He placed some dots, then drew some lines with his brush using a business card as a straight edge.  #brilliant  Before long, I had the dragon down.

Then we black lined the outline.  It took everything I had to draw straight lines on the dragon itself, and now I was being asked to draw straighter, thinner lines all around the thing?  I did my best, but I think my brush wasn’t quite up to the job.  #blamethebrush  After that, we added interior detail, to make it more interesting.  I basically just copied what Raffa did, but my mid-tones at this point were way too dark.  From a distance, the only bits visible are the bright white spots.

By the end of the class, we’d glazed on some brown to help convey the curve of the shield, and added battle damage using a sponge and some thin lines.  I’ve always done super clean paint jobs because I’m afraid of ruining them with damage done poorly, but I threw caution to the wind and figured Raffa could pull me out of the abyss if I messed it all up.  All in all, the class was awesome and the result was a killer shield (SQUEEE!).  See if you can find mine in the group shot.

Later in the afternoon, I took a weathering with pigments class from Justin.  I’d taken the class before, but didn’t really latch any of the info and all my tries to use pigments since were atrocious.  With another small class size, it was just five of us and Justin.  He threw out his script and he showed us his new acrylic weathering paints, which help lay a foundation for the rust effects that the pigments give.  They are pretty cool – they shift colors when you thin them down, because their core color becomes more evident.  He has this super dark, muddy grey that is actually purple.  He has a whole set based around doing shiny leather – variations on black using blues, purples and greens.

I paid more attention this time, and didn’t let my haste get the better of me.  My weathering base (which Justin sculpted just for this class) turned out awesome.  Well, the pipe did.  The rest I really didn’t do much to.

Saturday, I mostly worked the Iron Arena desk.  I re-wrote my 3-year old Who’s the Boss code, since it had some deprecated PHP tags, and didn’t have the PDO-MySQL support that I’d implemented 2 years ago for Iron Arena.

The last class I had was on skin, and it was with Roman.  The majority of it was review from his larger, longer blending class, however I did get some good confirmation of success feedback.  I was able to match my skin color in about three iterations of my first mixture.  That felt pretty good.  I was able to help some folks at my table through some of Roman’s exercises, but I’m not sure I learned much that was new because of the other class I took from him.  I’m OK with that, though.

Too often, when I see someone ask or give feedback on a model, there’s not enough positive.  And I’m not saying that you should make things up, but when someone does succeed at something, point it out.  Knowing what works is just as useful as knowing what doesn’t.  Beyond that, it feels good to hear that you’ve succeeded.  Some people rail on the compliment sandwich (just Google it, most of the results are articles against it, or definitions), however I feel mixing the good with the bad not only gives the feedback balance, it lets both the reviewer and the artist talk more conversationally.  “This works well, but it clashes with that.”  “See, you did it really well here, and completely cocked it up there.”

Anyway, it was nice to nail a few things on the first try, and succeed.

Sunday was more Iron Arena, and then the Capital Palette.  The minis were gorgeous, and I won’t try and give you my horrible cell phone pictures.  Instead, just head over here to check out the amazing professional photography that the Nova does for all the pieces submitted.

I won’t bury the lead: I didn’t win anything.  I didn’t deserve to, either.  There are many reasons, which I’ll cover in a Lesson Learned post later.  For now, enjoy my primary submission, Broadsides Bart in “Finders Keepers”.

First, if you get a chance to take a class with any of the four masters I mentioned here, take that chance.  All of them are funny, kind, and will have something worth while for you to listen to.

I think I got the most new information from Roman’s paint mixing classes.  Mixing my own paint and actually applying the color wheel is a new thing, and it really shouldn’t be.  However, I think I felt the most personal improvement in Raffa’s Freehand class.  I’ve always, always felt scared of weathering.  I can prove it by showing you the Secret Weapon pigments I purchased two years ago after taking Justin’s class the first time – they’re all still sealed.  That said, I love the weathering on my shield, and I love how well I managed to pull off that intimidating freehand design, and that feels really good.

I think I feel the most emboldened and challenged by Jessica and Justin.  Jessica spoke often of adding more and more embellishments in her freehand class, and that’s something I just never stop to do.  Freehand is why I haven’t done the UA for my Legionnaires – I’m afraid of screwing up the freehand on my banner.  It’s why Vayl2’s cloak never got further than airbrushing.  I really need to just try, and see where I land.  Likewise, Justin’s class proves the point that the separation between good and great is going the extra step.  He has weathering paints that very accurately capture the color of rust and grunge.  However, they don’t lend that rough, spotty texture that can only be achieved with pigments.  You have to go the extra step to push from good to great.

I’m going to write more on my thoughts after having completed and competed with my first “for competition” mini.  There were places I think I succeeded and placed I obviously failed.

I have a few products that I purchased (or that were gifted) that I will be trying out and talking about.

Trevor has quite a bit of Skorne that need painted.

I have several projects of my own that I now feel sufficiently equipped to handle.