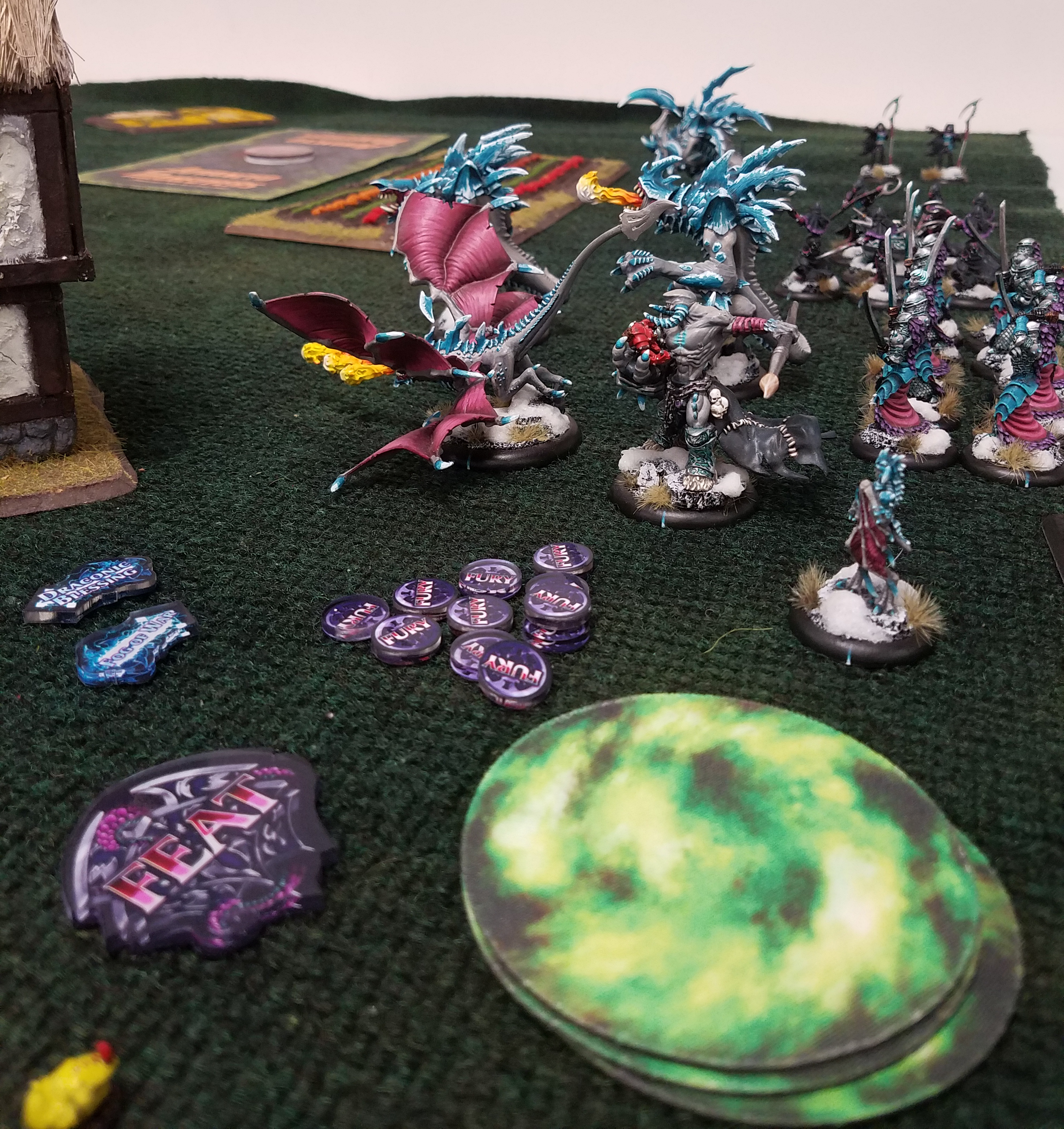 Muse On Minis was vending at the NOVA Open this year, and they had some fancy pants tokens they were pretty proud of.  They offered to give me a set if I wrote a review of them on the site. Overall, I was pretty impressed, but I do have some suggestions / criticisms which you can find in the pro/con lists at the bottom.

Last Wednesday at my LGS, I set out to blight the good blight equipped with a fancy new set of “Dragonspawn” Tokens, a spiffy magnetic spray template and some AOE mats for my Ravagore Scathers.  Local buddy and PG Chris decided to try and show me the error of my blighted ways, and threw down with his Biel Tan Eldar Retribution.  He happened to have some of the new MK3 Muse tokens, too, as well as a set of magnetic objectives for us to mostly ignore.  To make sure this review is as saturated with Muse stuff as possible, we borrowed some rectangular zones from the Advanced Maneuvers crew (who were filming one table over) which were custom made for them by none other than…  you guessed it… Muse on Minis!

Have I name dropped enough yet?  Yes?  Cool, let’s get on with the pew pew noises and pictures of pretty, pretty tokens by models.

Step one was to get all the stuff out for the list I was running.  Thagrosh1 was my Warlock for the night, so I dug around for his upkeeps, buffs and other accouterments.  I’m pretty jazzed that the Muse tokens are in blues, purples and pinks – they really match well with my Aquablight scheme, and look super slick next to my models.

I’m also excited about having some dedicated AOE templates for clouds and things that aren’t boring brass rings that never stay where I put them.  These were 3″, so not quite right for MK3 Scather templates, but they’ll work great for acid pits, Gaspy2’s Caustic Mist, etc.  The mousepad material is gripy, flexible and holds the color really nicely.

One of my favorite parts about the Muse Tokens is that they’re double sided.  I store mine in a compartmented bin, and it would suck having to dump all of them out and flip them over to find the ones I want.  Instead, I can just dig around really loudly, and annoy my opponent before the game starts.  #pshychologicalwarfare

Seriously though, not having to worry about wiping off dry erase markings, or flipping one-sided tokens so they’re face up is awesome.  It saves time and lets you focus more on the game than on how your tokens are placed.

The Retribution “Elven Zealots” tokens are super tech-y and on point.  The Legion “Dragonspawn” ones have different colors and silhouettes for upkeeps, one-round spells, animi and debuffs.  I think all of the faction token sets so the same.   By the time the game was over, I was already used to knowing which spells were upkeeps and which weren’t based on their colors.  That makes the maintenance & control phase super lazy because everything that’s purple or red goes away, and the blue upkeeps stick around.  #colors

The kits come with a big snazzy Feat token, and a pair of Mini Feat tokens.  As you can see, the Feat Token is a little larger than a 40mm base, which is, like huge. I really didn’t need to use it here for Thagrosh’s feat turn, but it was pretty and I wanted to use it, damnit.  It also reminded me that I didn’t get to do combat with Spiky Jones there who was brought back to life that turn.

Far and away, one of my favorite things Muse made is the magnetic spray template.  It disassembles into a 6, 8 and 10″ spray.  Sure the translucent ones show the same info, but these are more compact for storage, they’re fun to fiddle with during your opponent’s turn, and did I mention… THEY HAVE MAGNETS!!1!  I just can’t.  These things are way too cool, and a fun example of how technology evolves to fit the need of the community.  #innovation

Ok, I’m out of pictures, so let’s Gilmore this.

Disclaimer: I did receive the Dragonspawn token set, magnetic spray template and AOE markers for free in exchange for this review.  Muse was explicitly clear that should I not like them, I should 100% still write a review saying exactly why I didn’t like them.  I honestly do like their products.