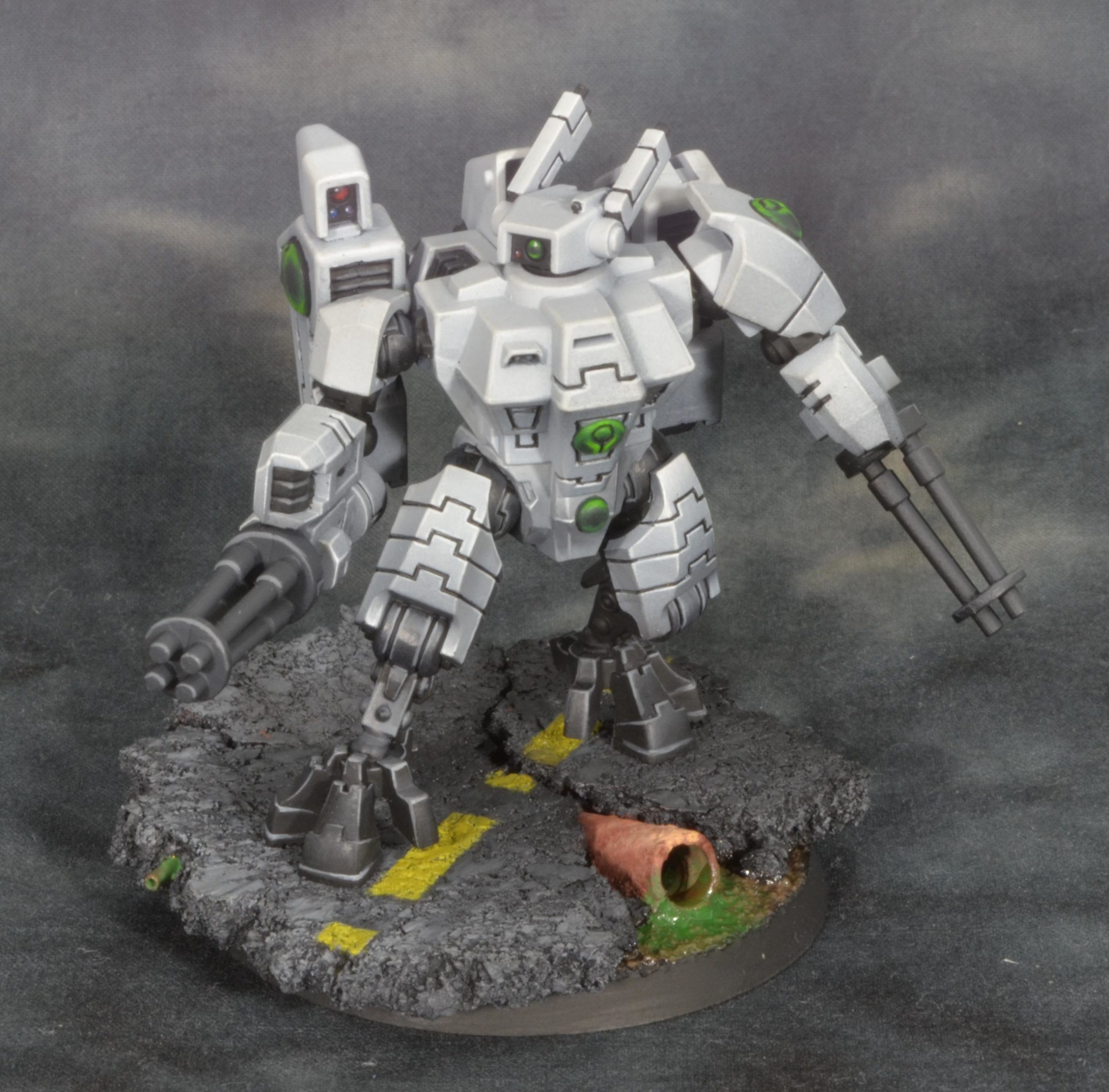 After getting back from the NOVA Open, I needed to work on something different than Warmachine and Hordes.  Different sculptors and model manufacturers have different aesthetics and that means they offer different painting experiences.  I needed a change of pace, so I dug out my Tau and started working on one of the new(er) XV-8 Crisis Battlesuits.  They redesigned these not long ago, and they are spectacular.  There’s detail all over, they go together really nicely, and offer quite a bit more pose-ability than the older models (which are about 15 years old):

I wanted to do an urban theme this go around, as a way to practice weathering and to work on more interesting and complex basing.  The urban environment dictated a mostly grey color palette, so I got out a set of four colors and my airbrushes and started playing around.  For all of the “white” and “black” on the model, I’m using the following Vallejo colors:  Black, German Grey, London Grey and White.  Often, while working off the wet palette, I’ll mix the three intermediaries, giving me roughly seven shades from pure black to pure white.

I started with the legs, which had large areas of armor and joints/structure.  This offered a nice place to play with both black and white, and make them interesting.  I used the airbrush to do the bulk of the work and show me where highlights and shadows should go and then enhanced the extremes with brushwork.  After some edge highlighting, I was pretty happy with the factory fresh look I’d achieved.  This is the requisite first step before weathering.

Once I’d ironed out the style and method I liked, I proceeded to screw it up on the torso.  Instead of using my tight beam Sotar for the final highlight of white, I used my Patriot 105 which had a larger, fire hose sized needle equipped.  It made grainy transitions and forced me to re-spray the white with the Sotar.  This made it too bright, and the white edge highlighting barely shows up.  Phooey.

As you can see above, I built an urban base.  Because broken asphalt + road markings + rusty pipes = urban, right?  That’s all you need!  The asphalt is just thick cork, and the pipe’s a plastic tube.  The rest is flock, paint and weathering pigments.  There’s a more detailed tutorial coming on how I do this kind of base, later.  It’s not difficult, but like weathering, it’s an annoying number of layers and lots of waiting for things to dry.

After getting through nearly all the edge highlighting, I really wanted to add a pop of color, so I threw down some green on the Tau icons and backpack.  These were all done by hand, using several layers and mixtures of the P3 greens. The small bits of color really pop off the more monotone armor. 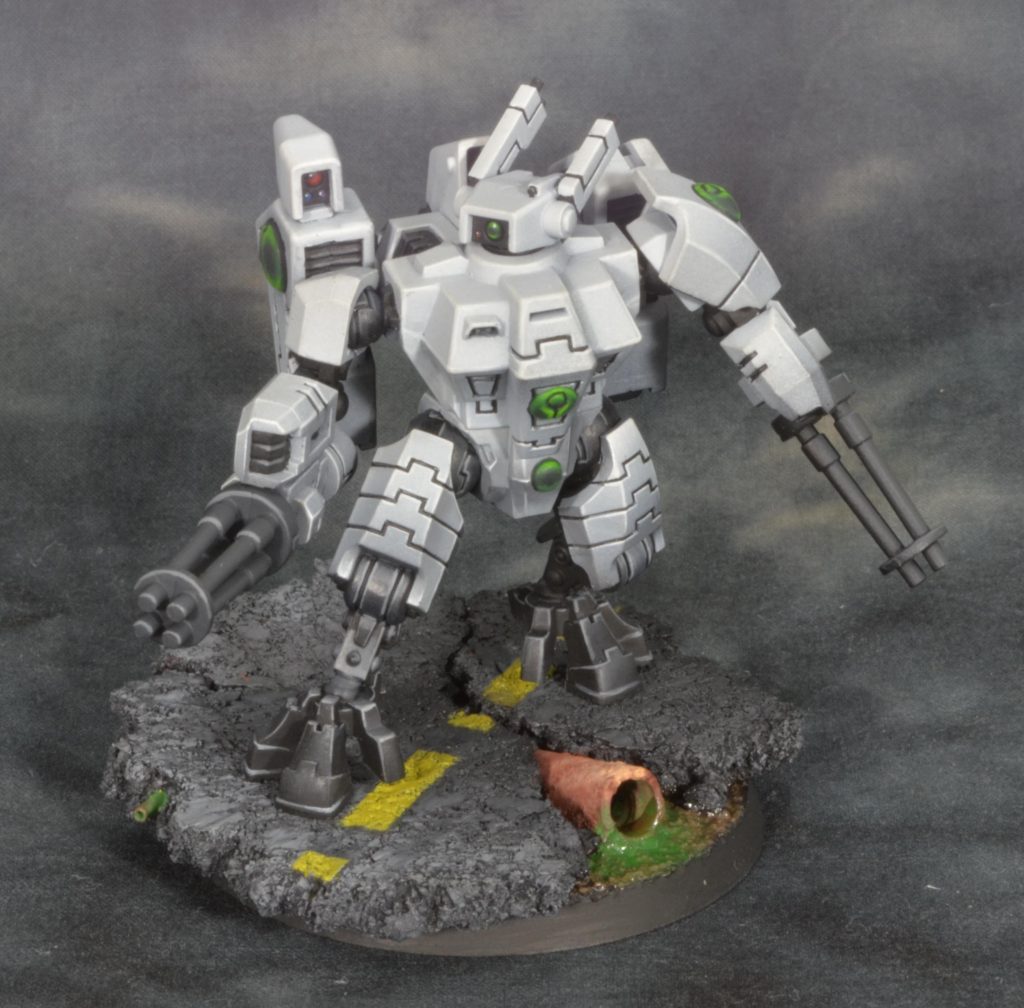 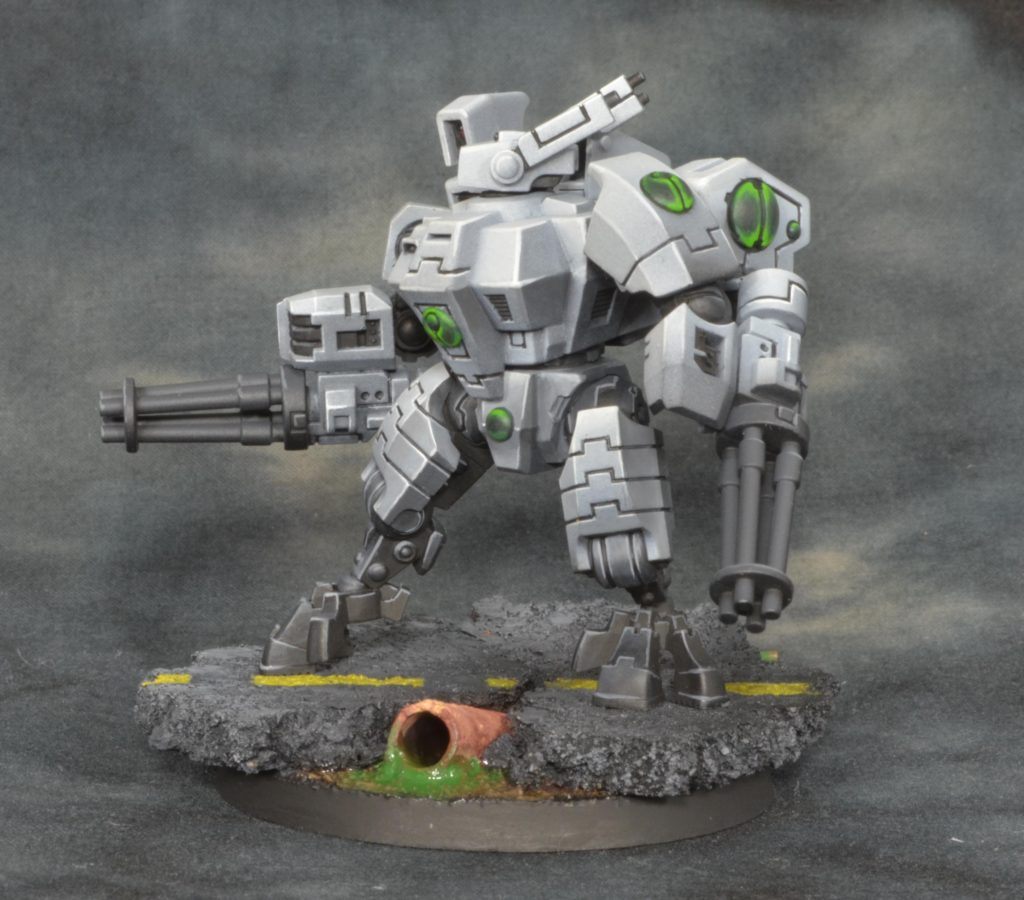 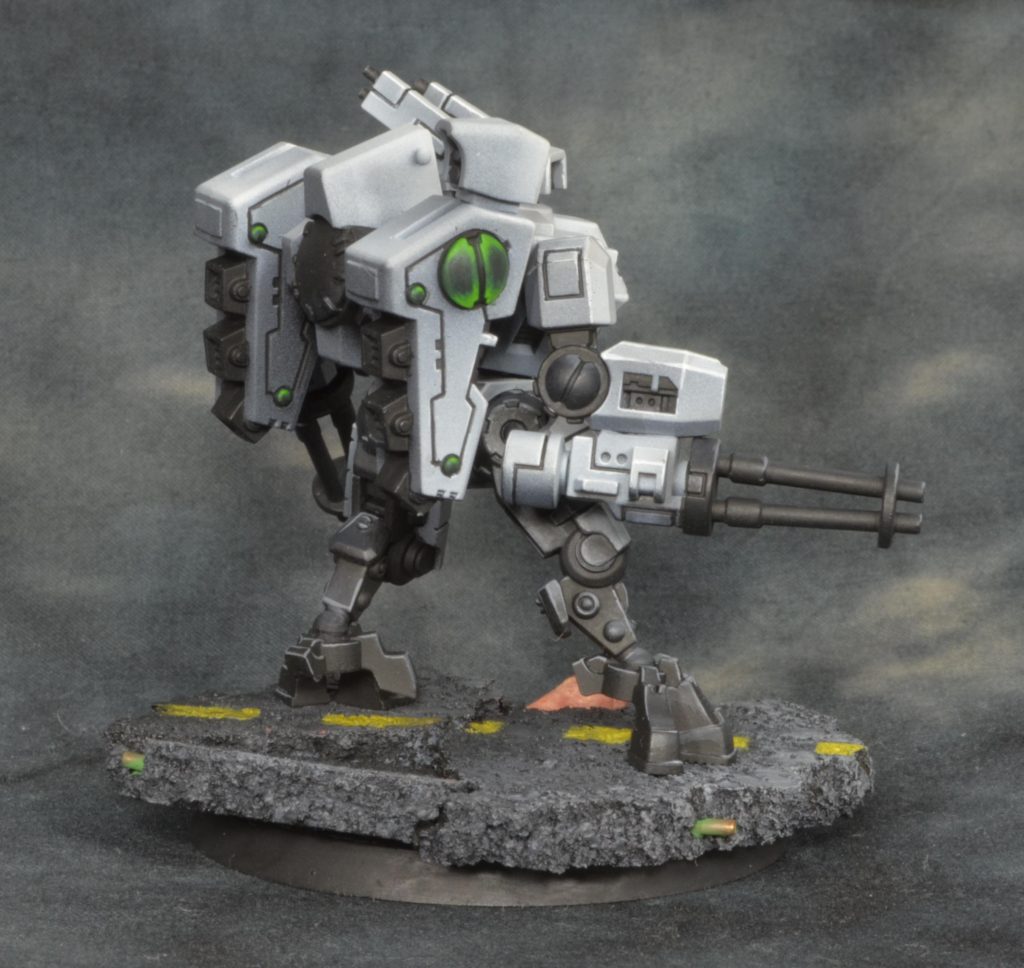 The last pic shows the back of the model, and lack of highlights on the jet pack exhaust.  Like the glow effects from the green bits, I want to wait until after I do the weathering, since those glow effects would sit on top of the weathering effects.  Additionally, I haven’t picked out any of the typical “off color” armor panels that most Tau paint schemes are known for.  Since those will be a pain to do by airbrush (especially now, with the model completely glued together), they’ll likely have to be done by hand.  Getting the highlighting and shading on those to line up and fit with the existing armor will be oodles of fun.

All of that in Part 2, whenever that happens.  For the immediate future, this guy’s going in the display cabinet.  Next up on my paint table are some commissions!