Xerxis is only half the equation.  The 50 pt tournament is a 2-list, Divide and Conquer type event.  So I need a second list.  I’m a pretty bad player already, so adding more warlocks is not a good idea.  Plus, I like Skorne’s beasts, so pMorghoul is a good choice.  Since I have a slow grow type list progression for Xerxis, I won’t do one for Morghoul.  Instead, I have a basic 50 pt list. 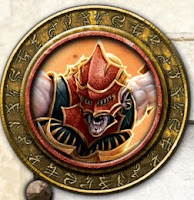 Master Tormentor Morghoul (*7pts)
* Cyclops Brute (5pts)
* Cyclops Savage (5pts)
* Cyclops Savage (5pts)
* Bronzeback Titan (10pts)
* Titan Gladiator (8pts)
Cataphract Cetrati (Leader and 5 Grunts) (11pts)
* Tyrant Vorkesh (3pts)
Paingiver Beast Handlers (Leader and 5 Grunts) (3pts)
Venators Reivers (Leader and 5 Grunts) (5pts)
* Venators Reiver Officer & Standard (2pts)
Here’s a run down of the list…
The Brute gives no knockdown to Morghoul, eliminating the easiest way to get around Morghoul’s high DEF.  Shield Guard is also a great ability.  Two Savages to act as early game missiles – Rush + Enrage + Abuse = awesome. A pair of heavy beasts round out the herd.  They both slam, and they both make things dead.
The Cetrati and Vorkesh are a screen while stuff makes it up the field.  Morghoul doesn’t do anything for infantry, so having an extra body and immunity to spells is worth it.  Late game, they are a screen for Morghoul should the Brute get taken out somehow.
The Venators are there to give me a ranged element.  With the minifeat, they can reach pretty far across the field when they need to.  Since I have the Cetrati, I don’t need a tarpit – so swordsmen are out.
This list I’m not quite as excited about, but we’ll see how it does.
About miniatures…
Speaking of Morghoul and beasts, the second cyclops now looks like the first.  All they need is undercloth (tan) and sash (green).  Morghoul’s next on the list, and I’m hoping to have him done by the end of this weekend.  I’ll have the Cyclopses… Cyclopsi?  Cyclopicles?  (bicyclopses?)  Whatever they’re called, I’ll have them all done tonight!  Pictures, I promise!


In other news, I’ve started a new commission! Out of the blue, I was contacted by the same client that had the Chaos Dwarf Centaurs built.  This time, I’m making four Snotling Pump Wagons!  The stock model looks like this:

I’ll be building them from scratch, and I’m pretty excited!  In case it’s hard to tell, these things are basically a railroad hand cart turned battering ram built by goblin gremlins.  We’re not going to just stop there though – oh no.  These things will have flappas – wings that let them jump over obstacles.  They’ll have buckets of rotten vegtables for ammunition, and they’ll each have a unique way to move really fast – rockets, twice as many wheels, wind sails and the like!  Looks like lots of fun!