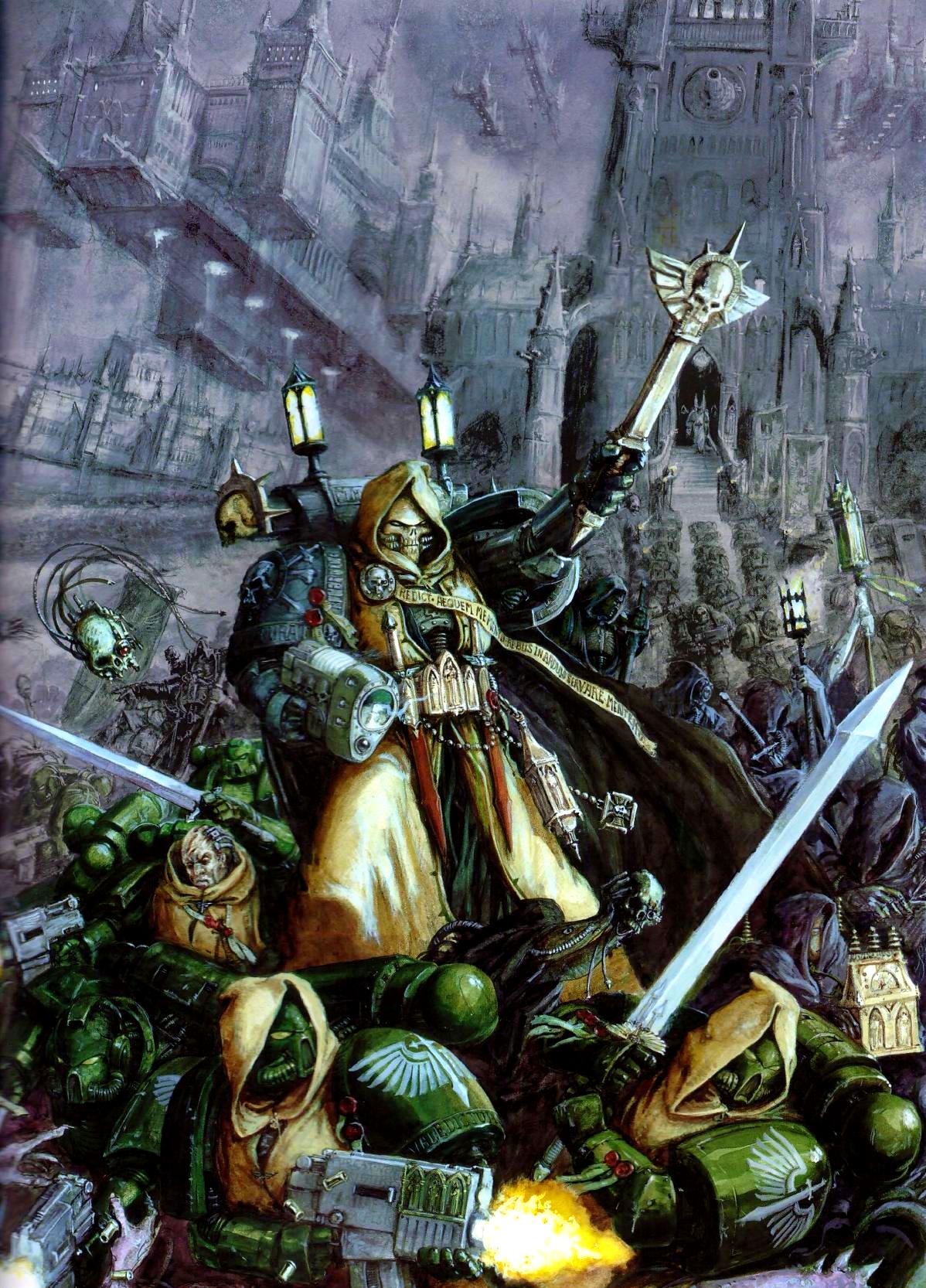 Earlier, LynchPin spoke about his Tau Force and I wanted to quickly discuss my plans for Dark Angels.

In most regards, the DA are standard Space Marines, but they have a fun back story and hidden agenda:

Back in the day, when Horus pulled an Anakin Skywalker and flipped to the Dark Side, most of the DA were away from their homeworld, Caliban, fighting for the Emperor out in the fringes of known space.  They got wind of the betrayal, but arrived at the party too late to stop Horus and his chaotic crazies.  They then got word of shenanigans at their homeworld, and when they got there, the guys in charge of safekeeping the planet had turned evil on the inhabitants and slaughtered everyone.

That pissed off the non-crazy Dark Angels, who then landed at the HQ and the head honcho (Lion El’Johnson) slugged it out with his boy-hood friend and second in command, Luther.  They accidentally opened a wormhole inside the planet, Star Trek style, and the only thing that saved them was the force field around their HQ castle. 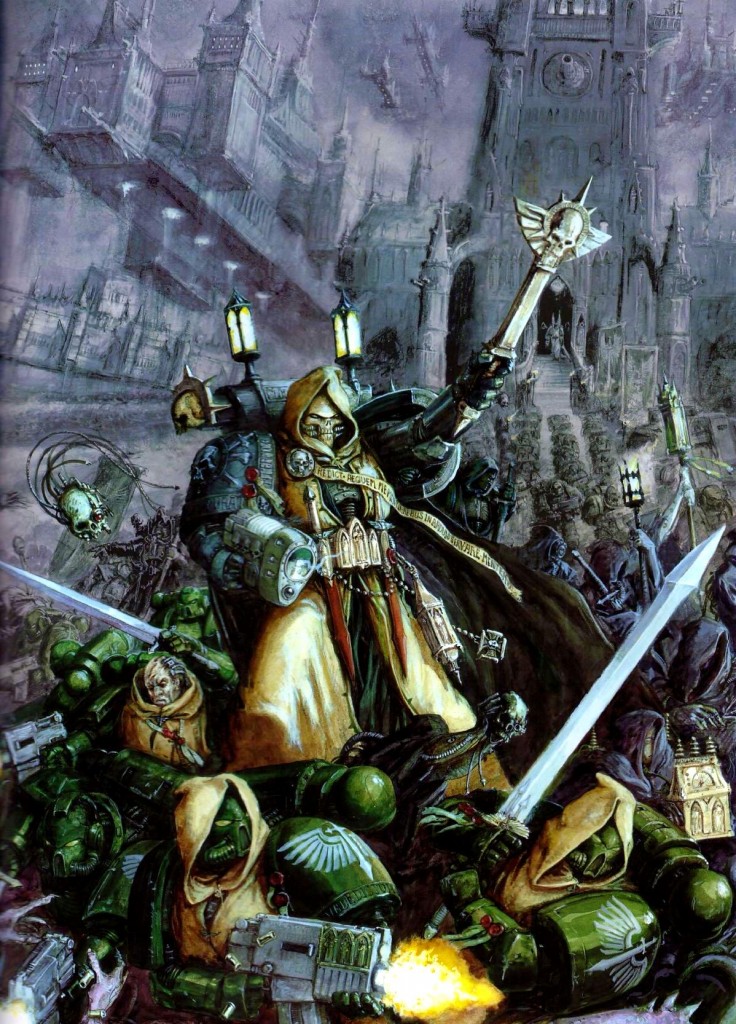 This “castle-monastery” is now called “The Rock” and floats around as their mobile HQ.  To everyone else, they say that Caliban was destroyed while anonymous bad guys assaulted them.  In secret, they know that their own guys lost it and went bad.  What makes this all worse is that the crazies that got sucked into the wormhole when the planet got destroyed started popping up randomly all over known space – they just kind of re-shuffled into existence.  So, now, the DA are on a secret crusade trying to find these “Fallen” before they cause too much damage, because the DA feel responsible for their existence, and are trying to keep their messed-up history a secret lest they be thrown out of the Imperial clubhouse.

That’s a really long winded way of saying that these guys are super-paranoid battle monks with an overactive Internal Affairs department.  What’s not to love?

While the entire grimdark 40k Imperium setting is a blend of Art-Deco and Baroque aesthetics, these guys add even more on top that with candles, books, and really cool monk-style robes.  Additionally, they have carry some of my favorite imagery of any miniature range out there: lots of wings, mysterious robed figures, and killer looking shields.  If you don’t know this already, I have a thing for angel imagery and shields. Anyway, for my army, I’m mostly working out of the Dark Vengeance 2-player starter kit, which features some good looking but cheap and mono-posed Dark Angels miniatures.  I have a complete 10-man Tactical Squad, two sets of three bikers, a Rhino APC, a squad of Deathwing Knights (above) and a few choice characters (Company Master, Librarian, LE Chaplian).  Unfortunately, the simplistic nature of the kits means that modifying them is a pain, so I’ll be sticking to them as-is for the most part.

In this case, that means ALL THE PLASMA.  I’m not sure why GW felt the need to load these models up on a ton of plasma weapons, but they did.  Yeah, they look cool, but they have a chance to overheat, blow up, and kill the guy holding the gun, and possibly the guy next to him.  Not cool.

The Combat Patrol format we’re using (to start), is just 400 points, but gets rid of the usual “1 HQ and 2x Troops” minimum for a standard army.  Instead, you just have to have one troop selection, and you’re limited to up to one of whatever other slots you want.  Since I only have the one tactical squad anyway, that’s fine by me!  My troops choice is a 10-man Tactical Squad, with a Sergeant carrying a Plasma Pistol, a trooper with a Plasmagun, and one Heavy Weapons dude with a Plasma Cannon.  I’d love to swap that out for a Missile Launcher (cheaper and more versatile), but I’m not going to worry about it for now.  My goal here is cheap and easy. 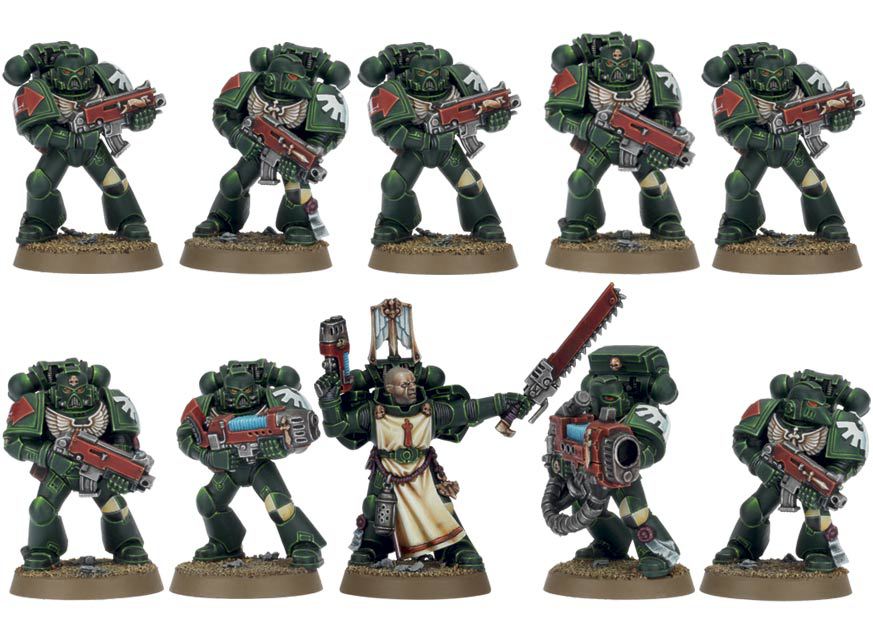 Those guys are nearly half my allotment at 180 pts.  I wanted to also include a Transport for them, so they can get where they need to go quickly.  Combat Patrol doesn’t normally allow tanks, unless they’re a dedicated transport, which a Rhino is.  Yay!  Rhinos are also super cheap, so that’s easy enough.  Additionally, once my guys have disembarked the vehicle, the rhino can drive around as mobile cover.  At least until it gets blown to pieces.

I’d love to plop down the gorgeous Deathwing Knight models, but they start at 245 point for the basic five dudes, and they really need a Chaplian plus Land Raider tank transport to be at their best, which just increases the cost exponentially (over 600 pts total, IIRC).    I do have bikes though, 6 to be exact.  Unfortunately, it’s two sets of teh same three models, including two captains – one of which I want to convert be a Librarian or other Character on a bike.  That leaves me with five, which, after paying for the upgrades chosen for me by the starter set designers, fits perfectly into the remaining 180ish points I have left.  Of course, there are more plasmaguns, because hey… we’re a bunch of overzealous monks too paranoid about secrets to pay attention to potentially suicidal wargear.  Oy.  I’ll just do a weapon swap between the two spare grunts in order to get some different poses. 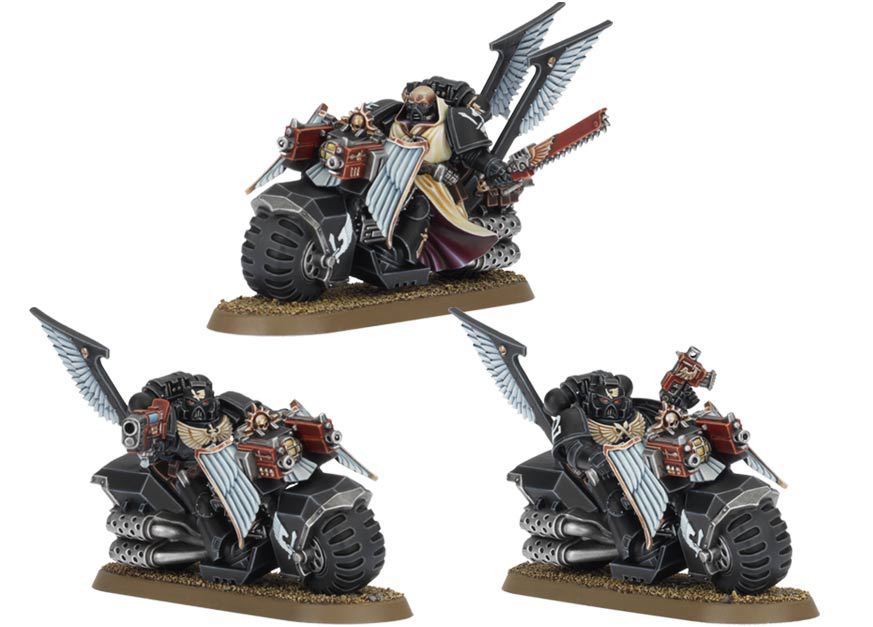 As you can see above, the predominant colors for Dark Angels are dark green and cream with red accents.  That’s fun, but since this is a fairly popular army, that’s the standard color scheme everyone goes with.  Additionally, I think the troops need more cream in the mix to break up the abundance of the primary color.  Especially when you start adding in robed marines who have lots of cream / white on them from the robes, everything can start looking a little disjointed.

I present to you, some alternate schemes, using Bolter & Chainsword’s Space Marine Painter. 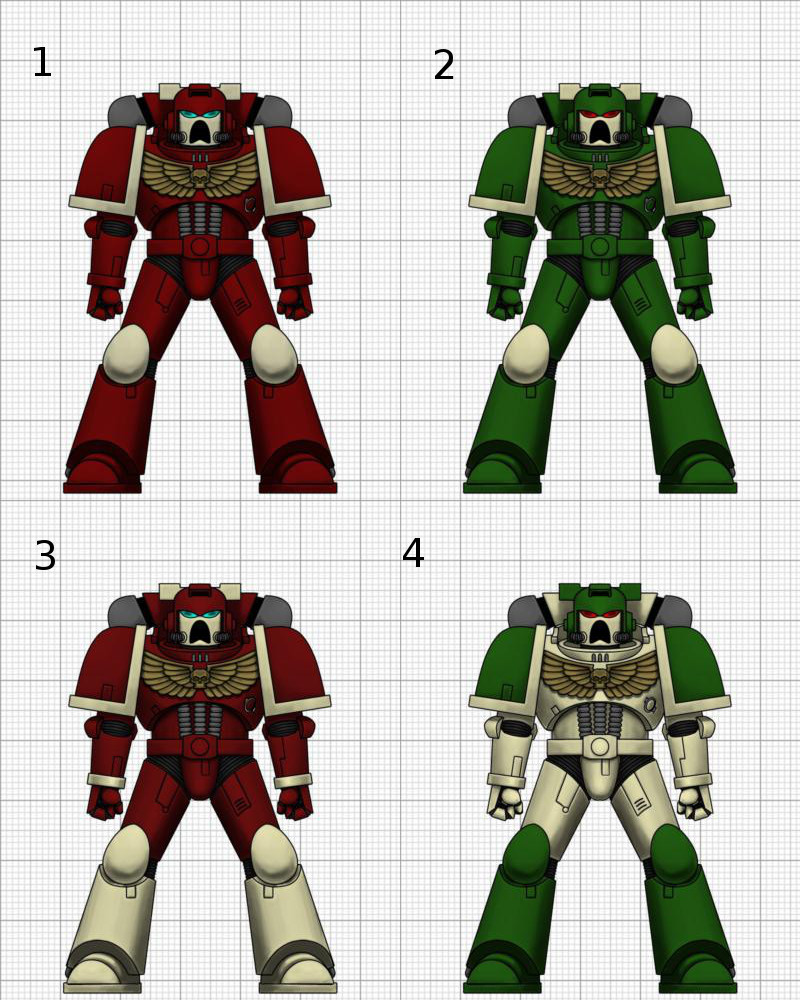 What do you think about these?  I’m really interested in seeing how a deep red looks, and I’m not sure just how much of the marine I want that cream / khaki color.  I’m personally partial to scheme 4.

Let me know which of the above you like best, and why.  If you have a suggestion, feel free to use the painter to jot it down and post a link!