My gaming buddies have been formalizing into a proper club over the past month, and one of the driving forces behind this has been running a charity event. This event, recently dubbed “Feat of Service” will benefit the Wounded Warrior Project. Awesome, right?

The event format is right up my alley, combining the new Spell Draft format with the tried and true Who’s the Boss to make a fun “Create-a-‘Caster” type play day. Here’s how it works:

There’s more details in some of the steps above, but that’s the jist of it.  There will be an award for the person who scores the most points (scavenger hunt), and one prize for the best converted & painted warcaster.  Lastly, there’s something for the club / group that donates the most to the WWP.

So, this week, a few of us got together to do a practice draft ahead of time, so we had time to double check the event’s rules and test out a few caster concepts we had.  I decided to take Vlad1’s chassis (stat line, weapon stats & abilities, feat) and run it in Legion of Everblight.  My thought was that I could utilize a Harrier’s animus to guarantee Blood Boon, effectively paying 1 FURY for a 3 FURY spell.  In addition, doubling my warbeast’s SPD on my feat turn would be disgusting with Legion’s already fast beasts.  Since Vlad1’s chassis comes with two non-reach weapons, I figured I could do something based off the Bayal model, or the Swordsman Champion, and make a Hex Hunter caster. 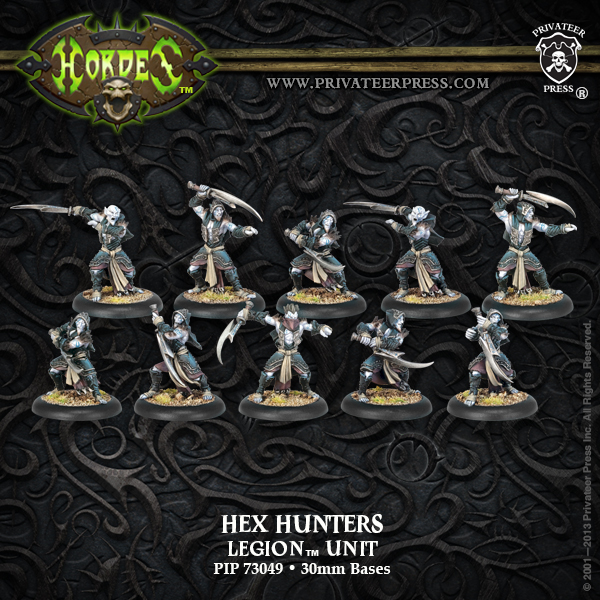 I wanted to use the Hex Hunters because I love the models, and they would keep with the theme of the Warcaster.  Since they handle Infantry fairly well, I took an Angeliusto crack armor, with the help of the BFS.  The BFS are there to be a good toolbox, to help make up for any obvious deficiencies in my spell list (which could be anything).  The Spell Martyrs are there as filler,, but they also fit into the caster-y feel of the theme.

With 10 points to fill at the end, I know I want a second heavy, but I don’t know what it’ll be.  Maybe a Ravagore if I happen to snag Snipe or Deadeye.  Maybe a Carnivean if I snag Arcane Shield or Boundless Charge, just to push his armor or Assault range to ridiculous.

I pick Eye of Menoth.  It’s a forcemultiplier on my Hex Hunters, since it’ll help them hit and then kill, which will trigger Battle Wizard, and they get the +1/+1 on their Hex Bolt too.  In addition, it’s on a 7 FURY chassis, it’s a decent area that will be affected.

I pick Wind Rush.  The smarter choice is likely Parasite, but I’m so used to playing Butcher1, and I have “Vlad1” on my mind, so I’m in a super solo frame of mind.  Still, it’s a fantastic tool to get the warcaster where it needs to be, and it’ll help counter the fact that my chassis is only SPD 6 and DEF 15.

I pick Psychic Vampire.  If I’d taken Striders, the two Snipes and this Deadeye would have been no brainers, but my Hex Hunters cast spells, they don’t shoot bows, and the only other thing in the army thus far with a ranged weapon is the Angel, so Deadeye’s not really worth it for me.  Ghost Walk is useless when I have pathfinder or flight on my beasts, and Banishing Ward just isn’t my style.  Psychic Vampire, however, is very much in theme for my concept, and is a great denial piece for the board.

I pick Energizer.  For one, it’s a powerful battlegroup spell, and the guy these cards are headed to next is running Deneghra1 in Retribution, and I know he has a Phoenix in his list, so I’m not giving him Energizer.  Secondly, Backlash is too situational for me (relies on my opponent’s faction choice and list comp), and for the same reason I didn’t want Ghost Walk, Energizer is a better spell for Legion than Mobility.  Also, Obliteration and Tornado are too expensive to be Blood Booned, so they’re not worth it.

It was here that I realized I hadn’t yet picked up a zot spell for Blood Boon, and I was really missing that Razor Wind from the previous round.

I pick Snipe.  My first round cards are back to me again (there are only 4 people in each draft “pod”), and the choice is obvious.  I have more than enough speed boosts, and Failsafe is useless for me.  Between Stone Skin and Snipe, it’s no contest.  Warmachine is a game of amplifying your best trait, not sacrificing what you’re best at in favor of reducing weaknesses.

I pick Malice.  Surefoot is cool, but not in theme or terribly necessary, and only affects one model.  Abuse is handy, but I really need a Blood Boonable zot, so I have to chose Malice, because I don’t remember there being any other useful zots in the next two rounds.

I pick Razor Wind.  I should have picked Abuse last round, but them’s the cards.

The next step is picking FOCUS/FURY – 1 spells to keep.  Since I’m on a 7-FURY chassis, I need to pick 6 spells.

Malice is a more situational, weaker Razor Wind.  It goes.  Tornado can’t be Blood Booned, despite being a nice control piece, and potentially in-theme.  It goes.

Eye of Menoth amps everything, so it won’t affect my list much.  Psychic Vampire is defensive, so not a worry for list building.  Wind Rush and Razor Wind are selfish, so don’t affect list building, and Energizer helps everything.  Notably, it’s awesome for a Ravagore, since it gets to move 3″ and still aim.  Considering Snipe targets, I could bring in Striders and really be nasty, but that leaves me with only two beasts, generating only 6 FURY a turn if they’re full.  I definitely need a second Heavy.  I think a Ravagore will use Snipe nicely, especially when combo’d with Energizer, and cycled onto the Angelius until the enemy closes.

So I have a pair of Spell Martyrs that really won’t do me any good.  If I’d had something like Eruption of Spines, Parasite, Calamity, or Ashes to Ashes, they’d be more useful, but with my exiting setup, not so much.  They can go.

Gameplay is just one aspect to the event, hobby is as well.  One of the reasons for doing the draft nearly a month ahead of time is so that you can order bits, build, convert and paint your warcaster.

I would probably pick up Bayal’s Left and Right sword arms, and use the Swordsmen Champion’s body for at least the legs.  I could spice up one sword by using Kallus’ blade.  I might be able to use Anyssa Ryvaal’s torso, and use Captain Farilor’s cape.  Lastly, I’d probably use Anyssa Ryvaal’s head, or Bayal’s.

This is a fairly crappy mock-up, most of the bits store images had to be scaled down to the Chapion’s body, which is the smallest of the images.  It still gives you an idea of what’s possible. 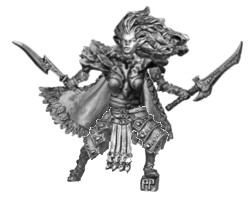 I could have used a few other chassis for this same idea.  Rahn would have worked very well with the Hex Hunters and BFS, and might have warranted a Sorceress on Hellion or even a Throne of Everblight.  I could have used Kallus’ blade, since it’s nice and big and could be thought of to have reach.  I could have also used Magnus1.  His free upkeeps would be in a super-magic-user-esque theme, and something that knocks down could be portrayed by a magical gauntlet or orgoth artifact.  I could have also gone a completely different direction, used Butcher1’s chassis and tried my hand at a Nephilim Warcaster.  Any of the Troll warlocks would have also been a solid choice, adding Tough on top of their stat line and feats.  Lastly, I could combine both my theme and the idea for a Nephilim Warcaster via Asphyxious1.

All in all, this is a great format that will be used to benefit a fantastic charity.  The definition of win-win!

Check out more at: http://www.novanomads.com/featofservice