Nomad. Alchemist. Charlatan. Explorer. All of these words equally describe the Farrow adventurer Jugaar. Plying his trade as an entrepreneurial alchemist and healer in an oversized vardo, the self-styled “Doctor Professor” stands out as a singularly peculiar individual on the roads of western Immoren.

Some commissions are loosey-goosey, with just a few instructions and lots of leeway. Others are very strict and exact, because the client has a very specific vision. Both types of job are fun, but for different reasons. The first are a way to unleash the creativity and interpret the client’s vision however I want. The more strict variety appeal to the engineer in me, the need to solve the puzzle and create a finished product that’s as perfect as possible.

This job was of the second variety, and that was incredibly refreshing while working on it.

Not only did my client (the highly esteemed High Lord Faultimus mod Durmstrang, Esq., II) have a very specific vision for this chartacter, he already had colored art and he’d already kitbashed and sculpted the model. 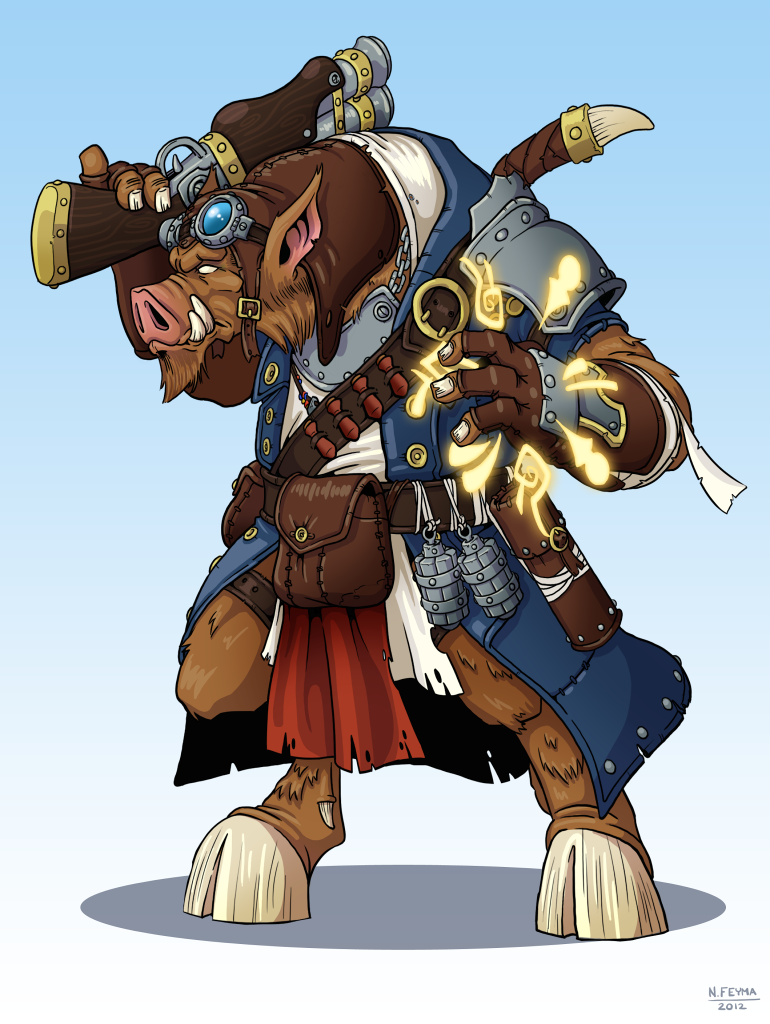 When I got the model, the first thing I did was zenethal prime it and take pictures so I could see where all of the dark and light bits were. More and more, I’m finding this a very useful first step, it takes out the guesswork on how the light will play over the model. 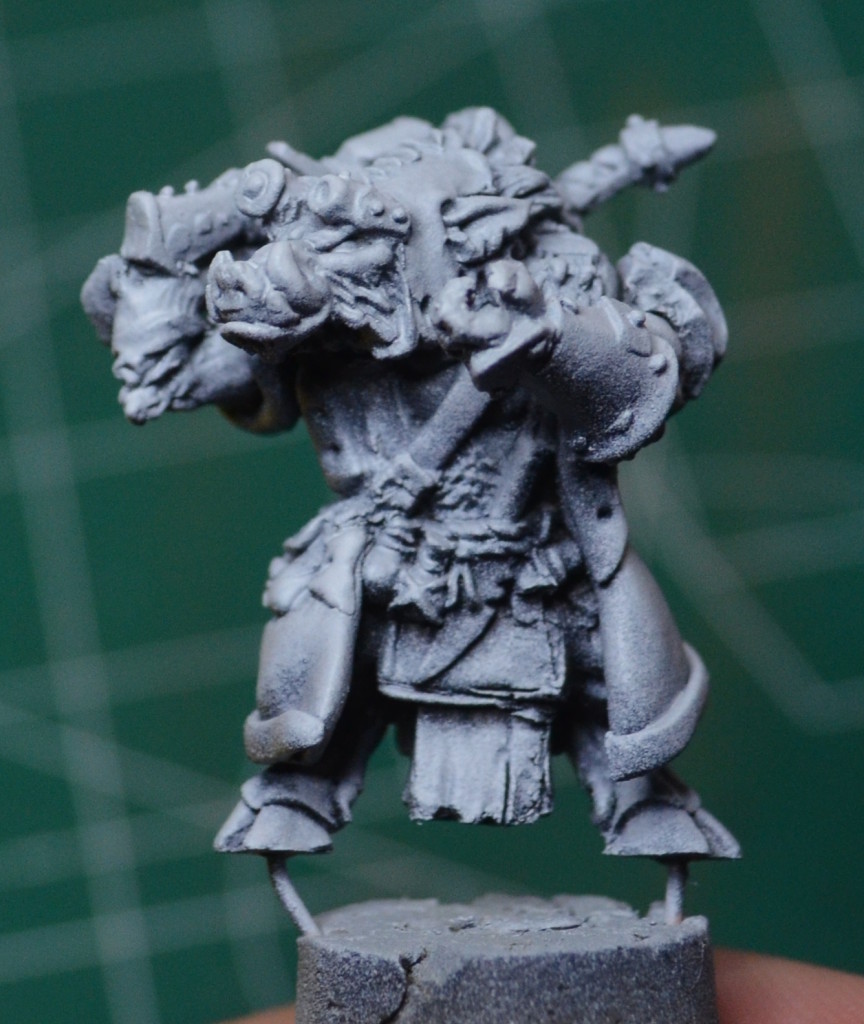 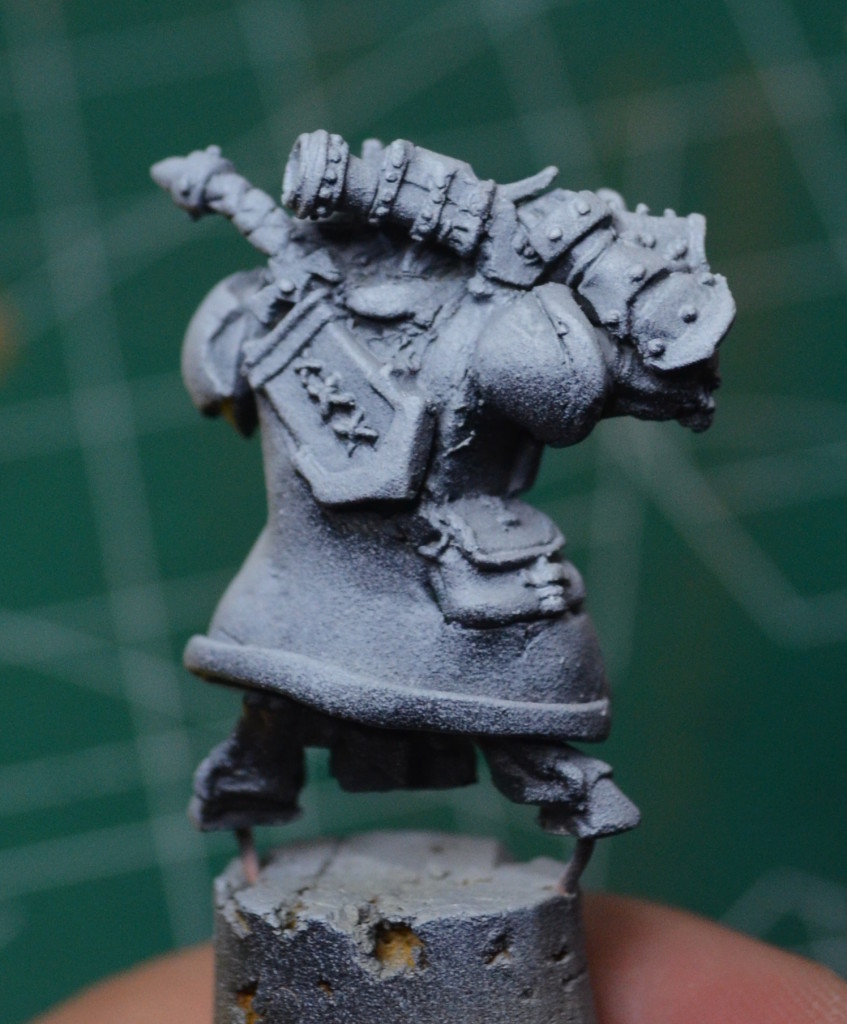 Once I had the lay of the land, so to speak, I started putting all of the colors from the artwork into place. I picked the Cygnar Blue triad for the coat, and Rucksack Tan for the fur. I’ve started using GW Rynox Hide for dark, oiled leathers, and the metals got a base coat of P3 Cold Steel.

Here’s a shot of the basecoated mini with the art in the background for a color check. 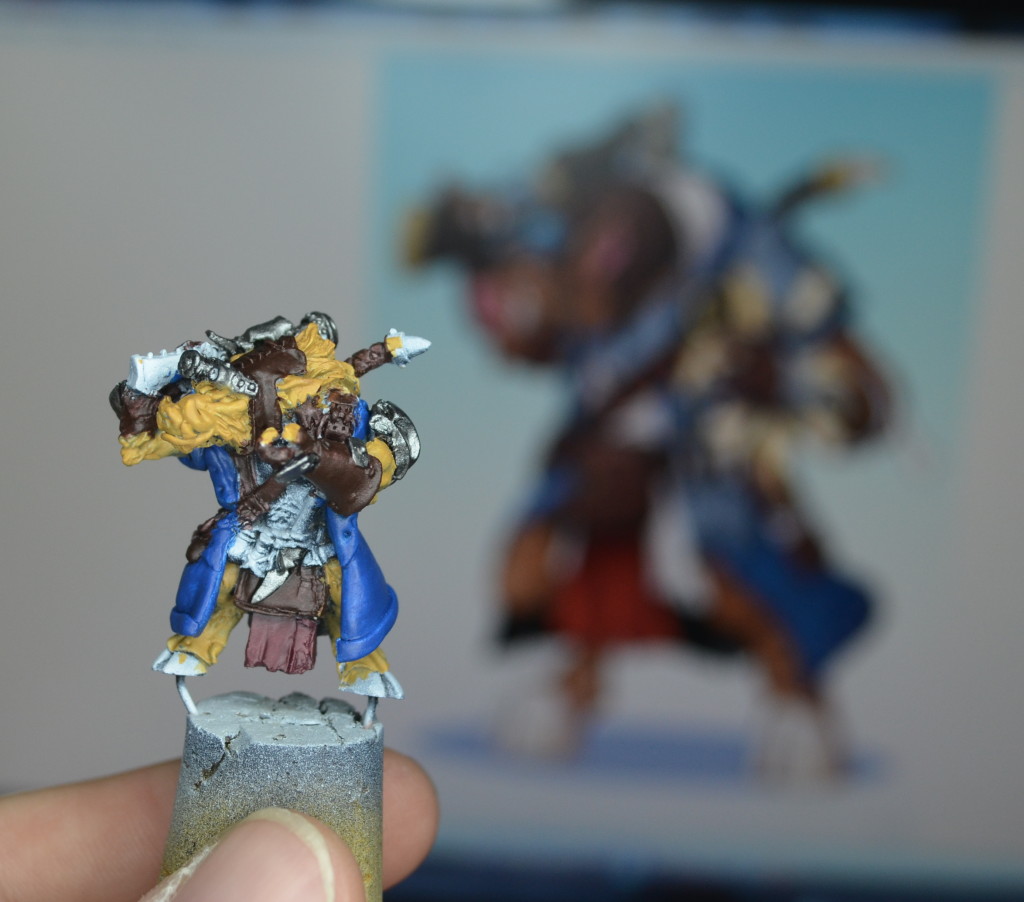 Most of the colors were spot on, but the fur was far too light. Rucksack Tan was more like what the highlights should be. Changing the base tone to Bloodtracker Brown did the trick. Once I had the base colors approved and settled, I started applying depth – shadows and highlights to all of these main colors.

I used the flesh tones that are highlights for the leather to add in some scratches and texture on the arm braces. The Farrow’s pink nose was P3 Carnal Pink with a little Sanguine Base mixed in to darken and saturate it just a bit. I threw some colors at the baubles on his belt, making one a coin purse and the other some sort of alchemikal thing-a-whats-it. 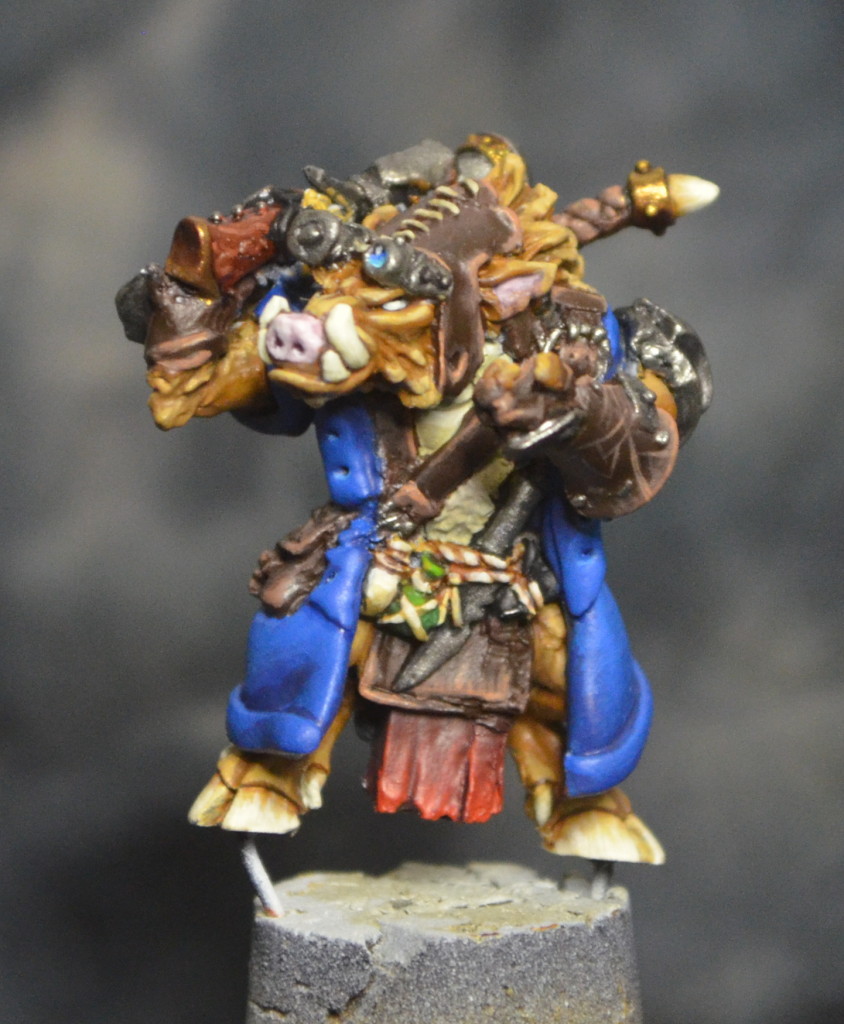 After a few rounds of feedback with the client, a few adjustments were made. The other lens on the goggles was painted to match the first, and the highlights on the leather were punched up some more. Also, the baubles on his belt were adjusted to turn the coin purse into another alchemikal bottle of fun. I also sculpted up a flagstone base and painted it up to look like dirty, dusty sandstone. before the final steps, I sealed the mini in a heavy gloss coat.

The model and base are still separate at this point, but now that I had the base started, I can finally show the client the piece in it’s frame, so to speak. 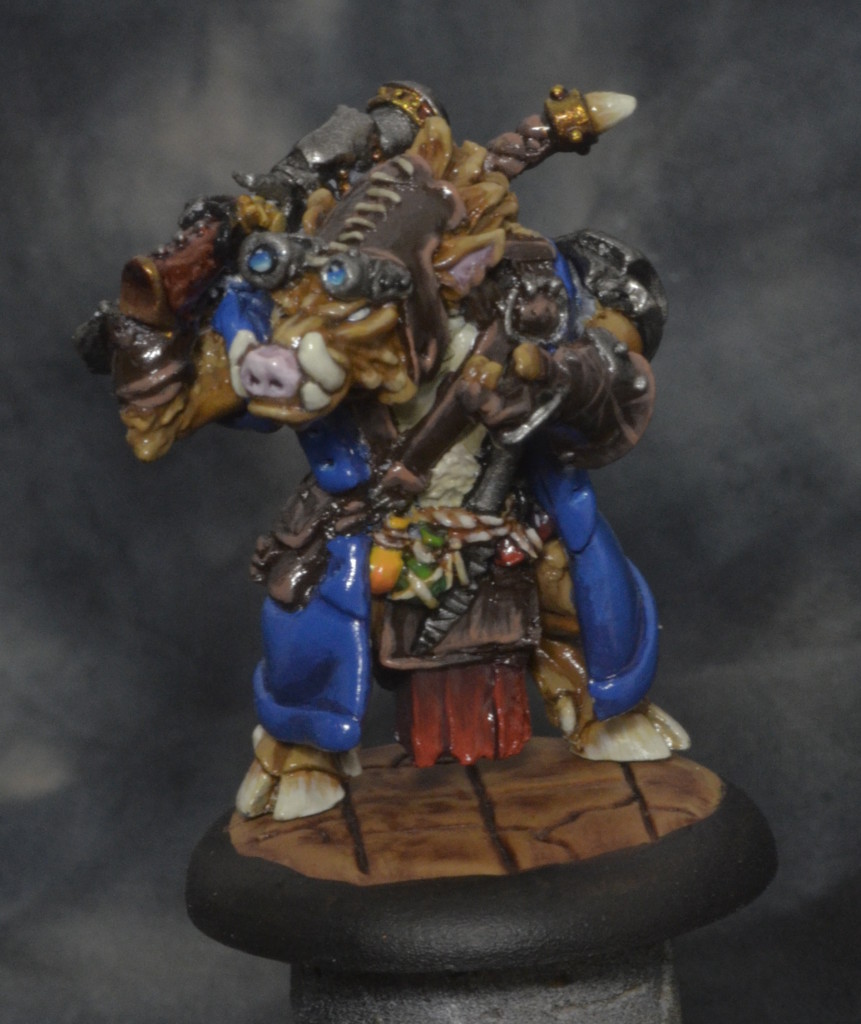 Once the gloss coat had been given time to cure (not long, it’s just Acrylic Future Floor Wax through an Airbrush), I hit the model with Liquitex Matte Varnish to kill the shine. This gave me the proper tooth required to paint on the Doctor Professor’s yellow glow effects. 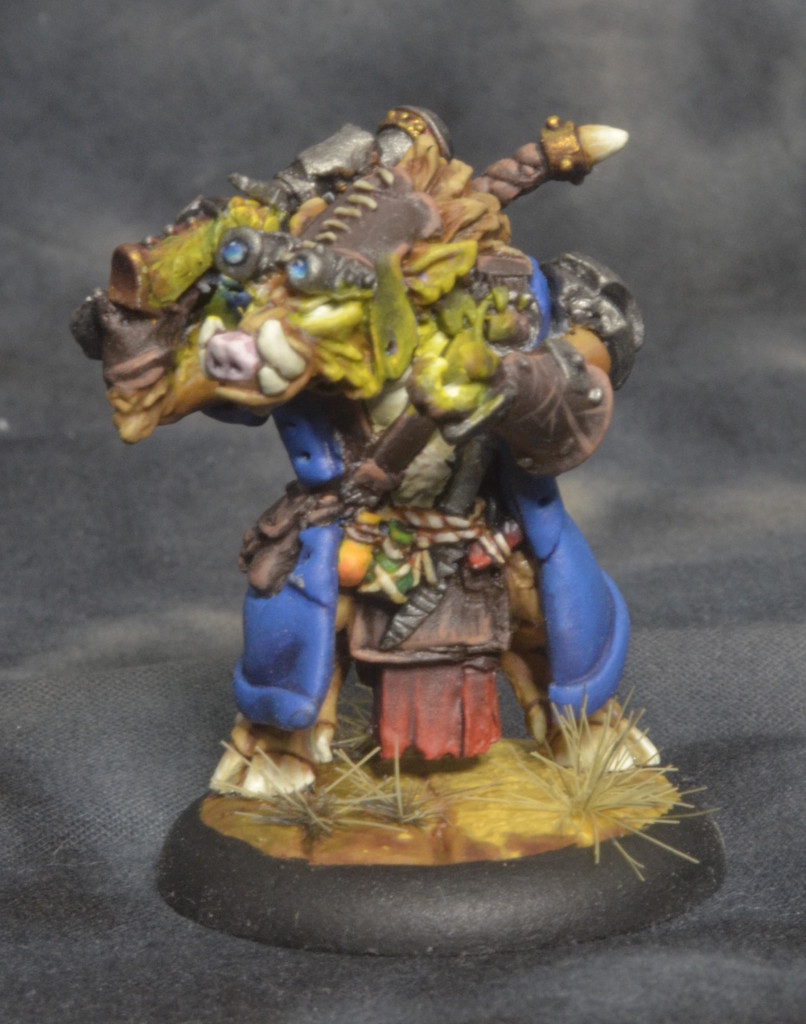 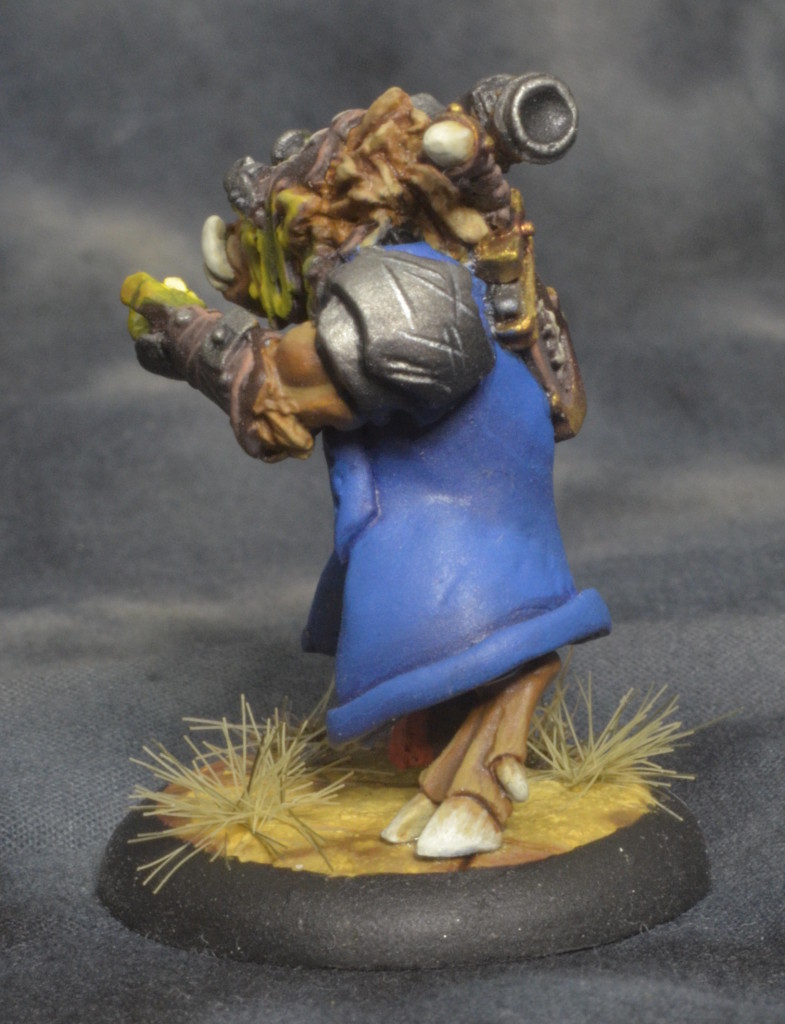 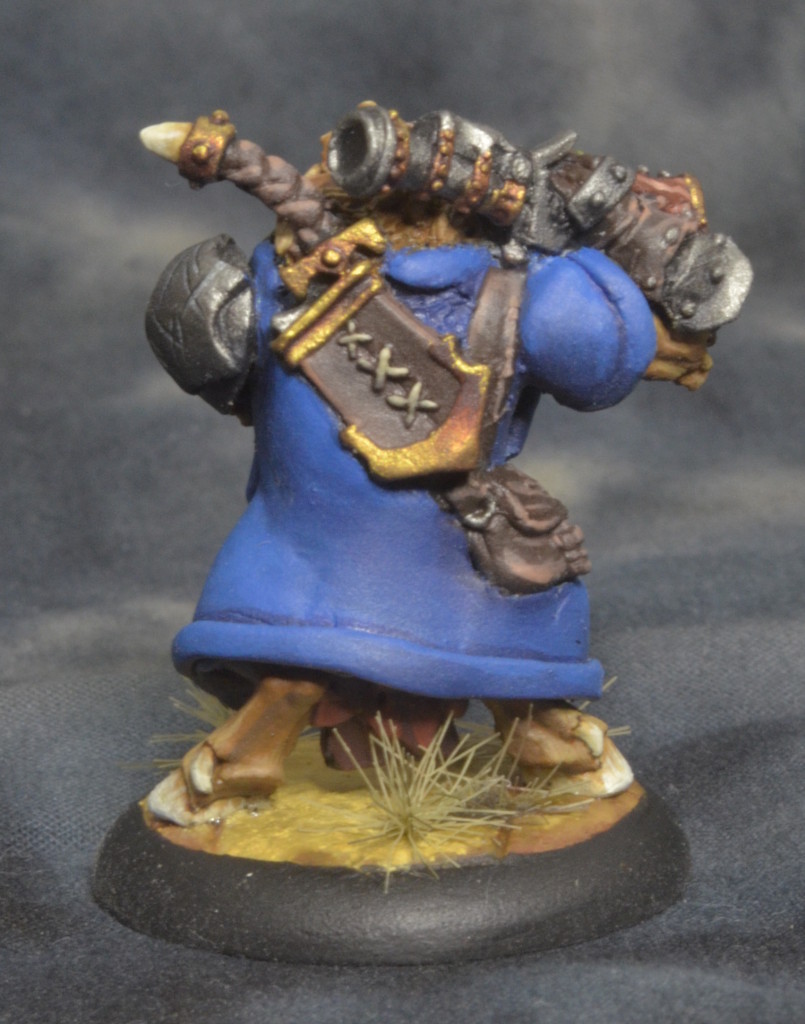 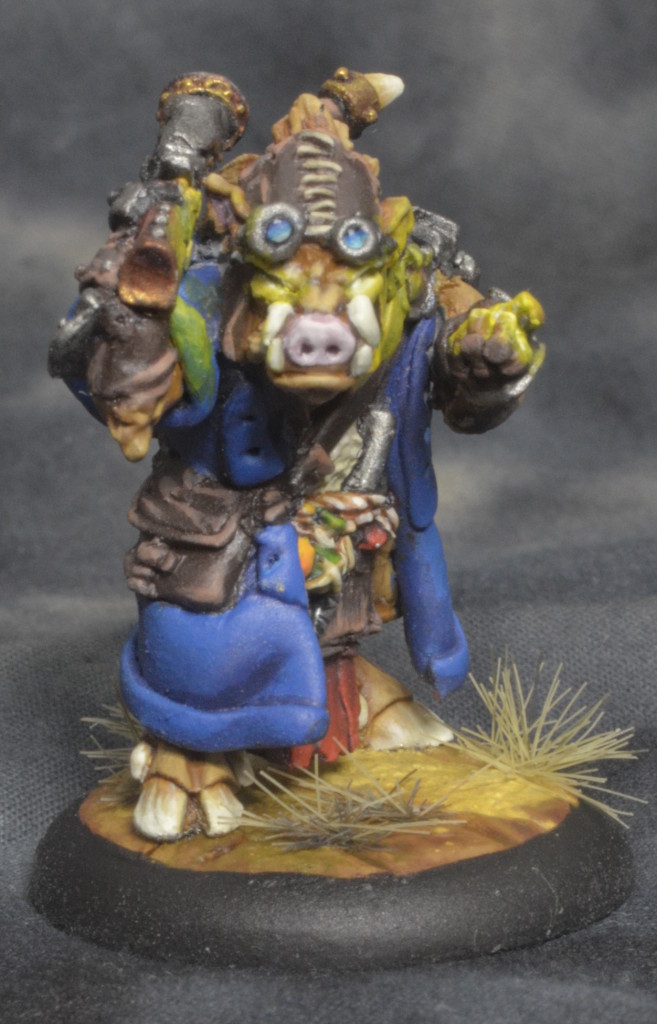 Overall, this was a very fun project. It was nice to get constant guidance on how to dial in the model to what the customer wants, rather than just hoping I’d make the right choices. The Doctor Professor is such an amazing character, and I’m very happy to have had the opportunity to help being him to life.