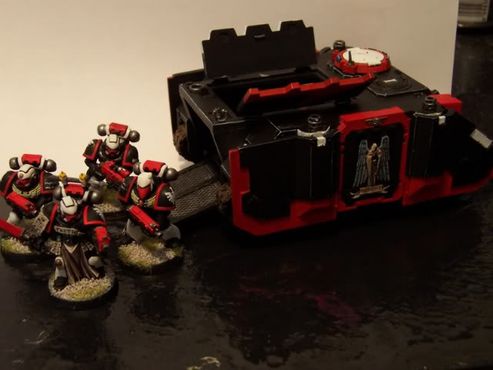 Not too long ago, I contacted Dave over at the Iron Agenda Blogging Network about having my blog syndicated and a few months later, here we are!  Thanks Dave!

Since I’m new around here, I figure a bit of Q&A about who I am and what I do is in order.

My name is Brendon, I live in the Northern Virginia area and work on electronics.  I’ve always liked building things.  I started with Legos and Erector Sets, and just when I was growing out of toys, I started working on cars with my Dad, an Automotive Engineer with Bosch.  Over the course of high school, he and I worked on my 1972 Cutlass S.  I still have it, though I don’t drive it anymore.

When did you first encounter miniature wargaming?

I started working on model cars when I wanted to do something more detailed than Legos.  After a few kits, I got tired of not being able to do anything with them when they were done.  So I asked around and found out about Warhammer 40k.  I picked up the starter set (Space Marines vs Dark Eldar) and started there.  Over my GW career I played Space Marines, Tau, and tried Tyranids.

When my college group was invaded by some Warmachine Players, I was intrigued and picked up some Khador models on Bartertown.  I started with the Battlebox and Widowmakers.  Since then, I’ve traded away all my unpainted Games Workshop and amassed a large collection of Warmachine / Hordes.  In addition to GW and PP, I’m starting to get into Spartan Games’ Firestorm Armada and Dystopian Wars.

Oh man.  How to choose?  Well, the faction I’ve stuck with the longest is Legion, so with that as a general heading, I’d have to say the Carnivean.  I even have two of them, and I’m doing my best to find ways to field both at the same time.  I just love the eyeless land sharks.  Rawr!

So, what exactly goes on here at Plarzoid’s Minis?

A little of everything, but mostly model converting, painting and the occasional battle report.  I like writing tutorials, so those crop up fairly often in either standard word and picture form, or a Youtube video, of which I have two right now.

Yeah.  How-tos.  Instructional articles walking you through a process.  I wrote my first one shortly after the plastic warjack kits were released.  I wanted to help people figure out how to magnetize their kits.  I was playing Protectorate of Menoth at the time, and posted a 31 picture, 13 post tutorial on the PP forums.  I also have a fairly often visited walk-through for stripping paint, and I just finished a series of tutorials covering the Skorne Battlebox (most notably, the Titan Gladiator).

I don’t do nearly as much as I’d like, but I have lots I want to do…  When I do paint, I usually take WIP shots and try to explain what I’m trying to do.  Unfortunately, painting techniques aren’t well represented by pictures, you really need a video to understand what’s going on.  When I blog about painting, I’m usually discussing colors, schemes or tricks (like which primer color to use, etc).

That would have to be the Chaos Dwarf Centaurs that were my first commission.  I kit-bashed Chaos Knight horses with Black Orcs and made a unit of ten centaurs.  It really stretched my skills and gave me lots of experience working with plasticard, greenstuff and painting to match a specific scheme.  You can check out the project recap here.  It’s my favorite because of all the stuff I learned.

What is your next project?

There’s never just one project.  I have Faction ADD, so I always have multiple things going.

Firstly, I love the Retribution Battle Mages (Mittens!) but hate the pose of the Ret ‘jacks.  So, I’m converting the ‘jacks to be far more dynamic.  I started with my salvaged (from Bartertown) Phoenix, and just last night finished my Chimera repose:

Also, I want to start painting my Spartan Games models.  I have some frigates from my two fleets, and I’m entertaining a few paint schemes but haven’t settled on any particular one yet.

Uh… Please check out some of my posts! There’s some good ones in there. If you like what you see, feel free to subscribe! Leave comments! Let me know what you like or don’t like.