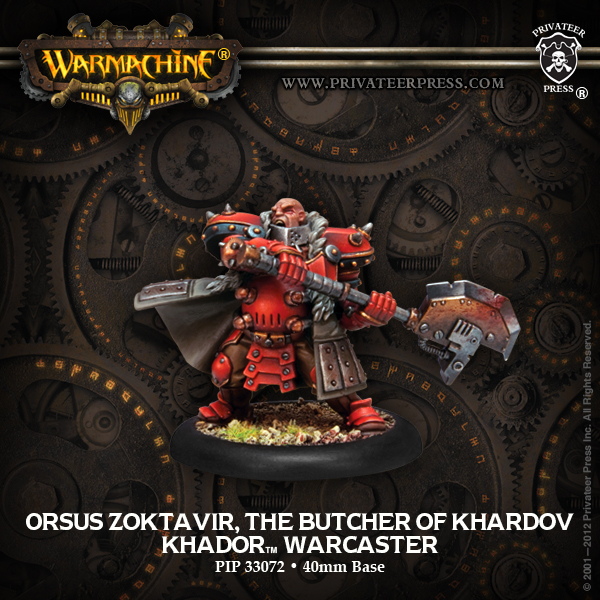 So, sometimes I get so caught up in what stuff each faction has, that I forget what the Mercenaries have to offer.  So, I’d like to go through some of my favorite Merc models, and then go into the nifty faction models that I like.

He works for lots of factions, namely Khador and Cygnar.  His Black Oil Bomb nullifies a target for a round, dropping essentially their entire stat line by 4.  To have a 2-3 pt model tie up a 8+ pt model for a round is entirely worth it.

An $8, I just haven’t ever picked him up.  Plus his model looks awesome.  Darkwing Duck!

Reinholdt has three things he does for an incredible 1 pt.  He allows your caster to measure between any two models in LOS.  He’ll reload your weapon for you, giving you one additional ranged attack, disregarding ROF.  He’ll also let you use his lucky charm, boosting an attack or damage roll and discarding the lowest.  You can use any of these, each turn.

I want to run a Kara Sloan dual defender type army, and Reinholdt’s a must-have for her since she has an amazing rifle with weaponmaster, but it’s ROF 1.

I have NQ 14-16, so I’ll be getting the Alt sculpt of pEiryss soon.  Both versions of Eiryss are useful, and count as in-faction models for Retribution.  She’ll also work for just about every Warmachine faction except Cryx, so she’s incredibly versatile.

Her prime version is great at hunting other solos and stripping a warmachine ‘caster of any ARM boosting focus.  Her Epic version is better suited for Hordes as she can strip animi and upkeep spells off targets she hits.  She can also shut down arcnodes by simply being near them.

These little guys can place a pretty nice could effect that blocks LOS between models on opposite sides.  They are great filler for armies needing that last 1pt.  Especially Cygnar, as they don’t really have any 1pt solos except Stormsmiths, who really need to run in trios to get greatest effect.

I need these guys to help me adjust my Trolls army too.

Speaking of which, there are lots of non-mercenary models I need to get to give me a bit of an easier time putting lists together.

Whelps are hilarious.  Due to the regenerative properties of Trollbloods, of a large enough chunk of one gets blown or cut off in battle, it can actually regenerate into a new troll.  They’re stunted and not terribly intelligent, but they love the bigger trolls.  The best part is, since trolls are always hungry, they’ll just eat a whelp when they’re angry.  In the game, they’re the only form of fury management Trolls have.  Since I want to run a beast heavy melee beatstick army (what trolls do best) I’ll need some whelps!

Tough, reach, vengeance and hard makes these guys the perfect tarpit unit with great offensive capabilities, and medium bases, so they can’t be trampled.. Buy the UA, and they get Set Defense and a mini-feat that gives them pathfinder and +2 to charge distance. How awesome!

I love Skorne shields.  They have so much character!  The Brute is a defensive light warbeast, and since I’d be playing a game with a battlebox based army, my warcaster could use some help on the defensive front.

Morghoul likes to run beast heavy, so substituting this guy for one of the offensive Cyclops Savages is not hard to do.

Following the love of shields…

Karax are a great tarpit unit for Skorne.  They have shield wall, so they’re tough to kill, they have reach, so no much can skinny past them, and they;re relatively cheap points wise.  What else could a ‘beast ‘caster ask for?

Lastly, they have shields, which is mandatory for me.

One of the few non Legion of Everblight models to have Eyeless sight, this beasty is a clean 4 points which takes the Battlebox from 11, to 15 and maintains a Tooth and Claw army.  With this guy, substituting a Savage for a Brute would give me nice Offensive potential with a touch of defense.

If I left both Savages in, added the Brute and this guy and maxed out my Beast Handlers, I’d have a nice little 25pt list.

A must-have for any Khador player, the Widowmakers are 4 points for some of the best snipers in the game.  Able to plink for an auto-point a piece, these models can chew through tarpits and other tough infantry, clearing charge lanes for your ‘jacks.  The Marksman is pretty great too.

I’d love to run pButcher again, and I understand Strakov helps the slow Khador ‘jacks get along, so he sounds fun to play as well.  Plus, both models look great!

No one does a long distance ranged game like the Sniper Princess.  She typically runs with dual Defenders, Reinholdt and a host of other shooty goodness.

Since I want to run a shooty Cygnar army, She’s the ‘caster for me!

She will also be getting a much needed repose.  Something like this…

This guy has an extended control range, so he can be up to 4x his controller’s FOCUS away.  He works great with the Journeyman Warcaster solo, who’s control range is typically a rather tight 6″.  The Hunter makes that 12″.  He’s a great assassination vector and hard target eliminator, since his gun has Armor Piercing.  Since Jr has 3 FOCUS, that’s 1 to upkeep an Arcane Shield on a target, and 2 to the Hunter for a fully boosted Pow 6 AP attack.

Nothing goes better with Stryker than a healthy dose of his character ‘jack, Ol’ Rowdy.  A bit expensive on the wallet, but amazing on the battlefield.

If it’s near a unit of Stormblades, it gets a free focus.  Stormblades can Marshall a ‘jack.  Hmm, I wonder if that’s significant…

If you have a Stormblades unit, you want a Stormclad.  He’ll play nicely with Stryker and the boys.  He’s not a big priority since he doesn’t play into the ranged aspect of the game, but when I want to boost Stryker’s force to 50 pts, a Stormclad will do nicely coming in at 10 pts.

So, what models are on your Holiday Wish List?  What models will you be buying yourself if you get some disposable income this season?  What lists will you use the models in?