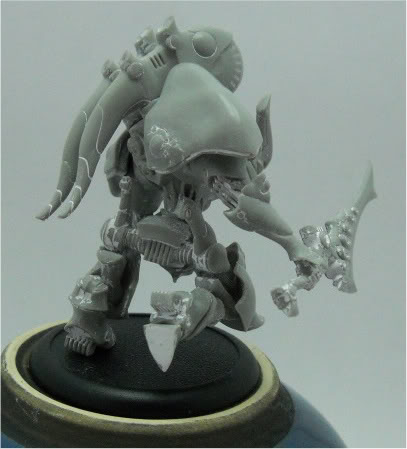 Their arms are fairly pose-able being 3-4 parts, but the legs are just in these boringly static positions. For a race built on grace and speed, that just won’t do!

So, here’s what I did to my Phoenix. First, I decided that since a Phoenix is such a staple ‘jack, I needed one basically at all times, thus it was worth gluing one together (and not magnetizing). It also helps that I got the ‘jack second hand, and that was the configuration that the original owner had chosen. The head and upper arms were solidly glued on, and despite the freezer and many minutes of trying, they wouldn’t budge. The head was also pretty well stuck, so that dictated part of the pose as well.

Since my biggest issue with the kit was the legs, it was my starting point. I picked the leg that’s typically a bit forward, and cut at the “ankle”. I then rotated the foot backwards into a “just leaving the ground” type position.  When I put the whole legs & waist assembly together, the waist sat too parallel to the floor.  So, I drilled out the hole on the leg I left alone, swamped it with glue and set the waist to a more forward tilted angle.  Once it’s all put together, the lower torso looks a bit like so:

So, with the back leg looking like it’s on it’s way forward, and the other leg mid stride, the ‘jack is obviously charging.  So, the arms need to match the movement.  If you’ve ever watched someone run, you’ll notice that the limbs that are opposite each other (left leg & right arm, right leg & left arm) always swing in opposite directions.  So, the arm opposite my forward moving leg needed to look like it was on the back swing, and the arm opposite the leg planted on the ground needed to be on it’s way forward.  That was achieved by putting the left arm in front of the torso, and the right arm a bit behind.  Like so:

To me, the overall pose looks as if the ‘jack is about to flip the sword over for a two-handed type downward stroke.  The pose isn’t terribly animated, but leaves lots to the imagination.  Here’s a whole bunch more shots (click to see larger versions).

So. Now the big question. What colors do I paint it?!?