Not long ago, I briefly discussed the awesome, new 2-player starter set.  Being a faction-a-holic, and Press Ganger, my mind is constantly running over battleboxes, small lists and how to expand on each faction’s battlebox.

This obsession with listography was greatly accelerated when I traded in my Blackberry for an Android and had access to iBodger.  Oh boy, did that make things fun.

Anyway, I’ve been wracking my mind about how to best make use of the 2-player starter set.  The Man-O-War Shocktroopers are a staple Khador unit, but the Cinerators are another story.  Recently, Gentleben of Bell of Lost Souls went over his suggestions for expanding the Protectorate side of the set.  His suggestions are all top notch, and almost exactly what I would suggest.  His army looks fantastic too, so be sure to check it out. 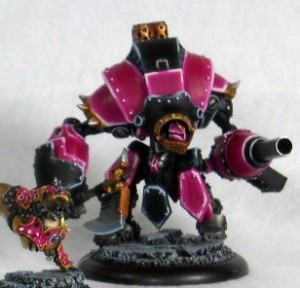 For the Khador side, we start with an even 20 points.  My first thought is to move a warjack off Sorscha somehow.  She likes having all her focus for upkeeps, Boundless Charge, and Wind Rush faux-J-charge shenanigans, so having more than one ‘jack on her can leave her starved for focus.  The Destroyer would be the better ‘jack to put on a marshal since it rarely needs to boost a roll, whereas the Juggernaut loves being fully loaded (and should therefore be on a warcaster since that’s the only way to give a Khador ‘jack 3 focus).

Khador has two ‘jack marshals and by far the best one is the Koldun Lord.  It carries Power Booster, so it can give it’s ‘jack (effectively) two focus a turn.  In addition, it has a spray and Ice Cage, which reduces the DEF of a target enemy model (which means the Destroyer is more accurate).  All that for 2 points and $10?  Yes. Please.

Next, I would add in the classic Khador Warcaster Attachment, the War Dog.  With Tough, Counter Charge and Guard Dog, this little 1 pt wonder should be in every Khador list that allows it.  Especially when he turns Sorscha’s DEF 16 into an 18 if she’s caught in melee.  You can also use him to clear off a nearby enemy model engaging your warcaster with a charge, so you don’t have to chance a free strike when you move your warcaster.  Often my opponent will run something into melee with my warcaster, trying to tie them up, and the War Dog can come chew on their ankles, letting my warcaster get away.

Next, Widowmakers.  These snipers auto-plink for one damage, so they completely ignore Shield-Wall or other such ARM increasing effects.  They are perfect for picking off solos, support models, or any type of infantry, really.  With four to the unit, you can use them to open up a charge lane, or LOS from one of your important models to one of your opponent’s.  They aren’t terribly well equipped, defensively, but they will do alright if you can park them in some woods or on a hill.

At this point, I have 8 points left.  I feel this list could go two different ways, depending on what you want out of it.  If you wanted to go ‘jack heavy, I’d add in a Kodiak.  It runs amazingly well on zero focus, and on her feat turn, it’s phenomenal.  If you’d rather go infantry heavy, go with a full Winterguard Infantry with UA.  That’s a dozen more bodies on the field with the ability to shoot CRAs, sprays or just charge in and tie stuff up.  It’s also the beginning of the dreaded Winterguard Deathstar, which I won’t go into right now.

So, my 35 pt Khador 2-Player Starter Expansion looks like this:

Personally, I highly suggest the ‘jack heavy option.  You’ll get great use out of the Kodiak model (since it works very well on it’s own, or Marshalled for that matter), whereas the Winterguard need another 5 points of support models to really shine, and are fully optimized only with one of the ‘casters with access to Iron Flesh.  You also rarely need Shocktroopers and Winterguard – they’re both primarily there to tie stuff up long enough for you to assasinate the opposing warcaster. In addition, it’s more expensive to go with the Infantry, and it means you have another dozen models to paint.

The general M.O. of a Sorscha1 army is to capitalize on the feat, much like a Kreoss1 army.  With that in mind, both of these lists are heavy on ranged firepower, and should be able to handle most other lists out there.  Other models to think about include:

From here on out, I’m going to highlight questions directed at you, the readers in orange.  Please share your thoughts or responses to them in the comments below!

What do you think of the lists?

How would you expand on the 2-player set?