There’s a little thing the Press Gang does every so often – the old swap and paint!

I was randomly assigned to paint for someone, and they’ve requested a Reeve Hunter!  The major stipulations on paint scheme was that the armor be blue (Exile Blue), and the metallic parts of the armor should be brass / gold.

I gotta say, having the scheme already picked out makes putting paint to model pretty easy.   There’s no second guessing – only painting.

Since I’ve just done some manhunters which were mostly leather and fur linings, the cloak and wolf pelt were done pretty quickly.  I followed the same scheme I used earlier – Rucksack Tan with Gryphonne Sepia.  The other leathery bits got the other leather treatment: Battlefield Brown with Ogryn Flesh. 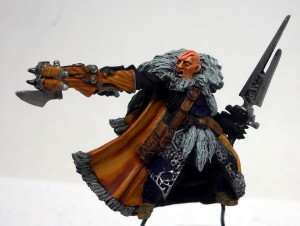 The Grey bits are a nice coat of Foundation Adepticon Grey, washed with watered down Badab Black, drybrushed with the basecoat.

The head is again, a standard formula:  Tallarn Flesh washed with Gryphonne Sepia, highlighted with some Tallarn Flesh.  The scars were done the same way as on Hexeris – just some very carefully placed Red Ink. 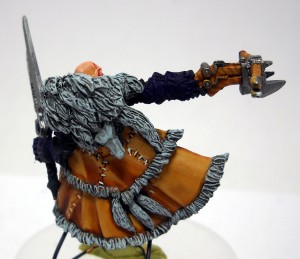 This is one of the few Circle models I’ve ever painted, and I really enjoy it so far.  There’s all sorts of crazy details going on, and I think they look really good in earth tones (for obvious reasons).

I’m pretty sure this is some of the best leather I’ve ever painted.  I hope the recipient likes the model, and I hope it performs well on the tabletop!