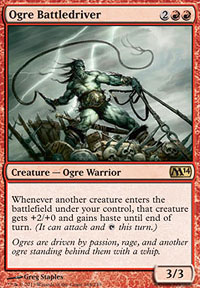 It’s decently cheap at four mana, it’s in the mid-range of power and toughness, and it makes all the rest of your creatures incredible whenever they come into the battlefield. Plus it’s a foil rare, and thus extra cool. Drop a [card]Regathan Firecat[/card] while [card]Ogre Battledriver[/card] is out, and it’s a 6/1, swinging in the turn it comes out. Awesome, pure awesome.

My only concern is it’s low toughness. Creature removal is usually pretty common in draft events, so the [card]Ogre Battledriver[/card]’s low tougness but impactful ability makes it a huge target.

[card]Flames of the Firebrand[/card] is on par with [card]Shock[/card] and [card]Lightning Strike[/card], but the ability to spread out the damage means it can be used to take out multiple low toughness creatures. Excellent removal, and can be applied directly to the opponent’s forehead instead of to a creature. Directly to the forehead.

[card]Wall of Frost[/card] is a hell of a cheap blocker, and it sort of freezes anything that you block with it, which is cool. It’s even better because it has enough toughness to block some serious creatures. This doesn’t fit into the whole “BREAD” thing, so I doubt it would be high on people’s picks, but if I were putting together a blue deck that was fancy and full of non-creature shenanigans, this would be a solid shield to hide behind while doing said shenanigans. [card]Regathan Firecat[/card] is a nice bomb. Pretty much the definition of it. 4/1 for 3? Boom. [card]Essence Scatter[/card] is a card that would be a part of said shenanigans that would be going on behind the [card]Wall of Frost[/card]. Super cheap counter to someone’s creature spell, this can delay your opponent’s momentum, and buy you a critical turn. I think this is an obvious choice if you’re already invested in blue, and if I weren’t yet, this card would seriously make me consider it.

[card]Charging Griffon[/card] makes the list, since it’s essentially a 3/3 as long as you keep it on offense. You’re also paying for flying, but that’s nice to have anyway. [card]Undead Minotaur[/card] isn’t terrible. It’s not anything to write home about, but … OK, yeah, it’s pretty mediocre. But at least it’s a creature with power? Ok, the truth is, I’m not a huge fan of black, on principle, and I wanted to include a black card. [card]Sporemound[/card]’s nice if you get it out early and can keep it alive. You’ll eventually get lots if little creatures. Though, if you combind [card]Sporemound[/card] with the [card]Ogre Battledriver[/card], then each creature token is a 3/1. That’s pretty awesome, especially since you get them for free while also adding to your mana pool.

I feel I’d be remiss if I didn’t talk about [card]Planar Cleansing[/card]. It’s a vastly powerful card, but it’s way too expensive for the draft format, and it has zero offensive capabilities – by that I mean it won’t damage your opponent. It’s a cool card, and very godlike, and I’m sure it’ll really mess people up, but I just don’t think it fits here.