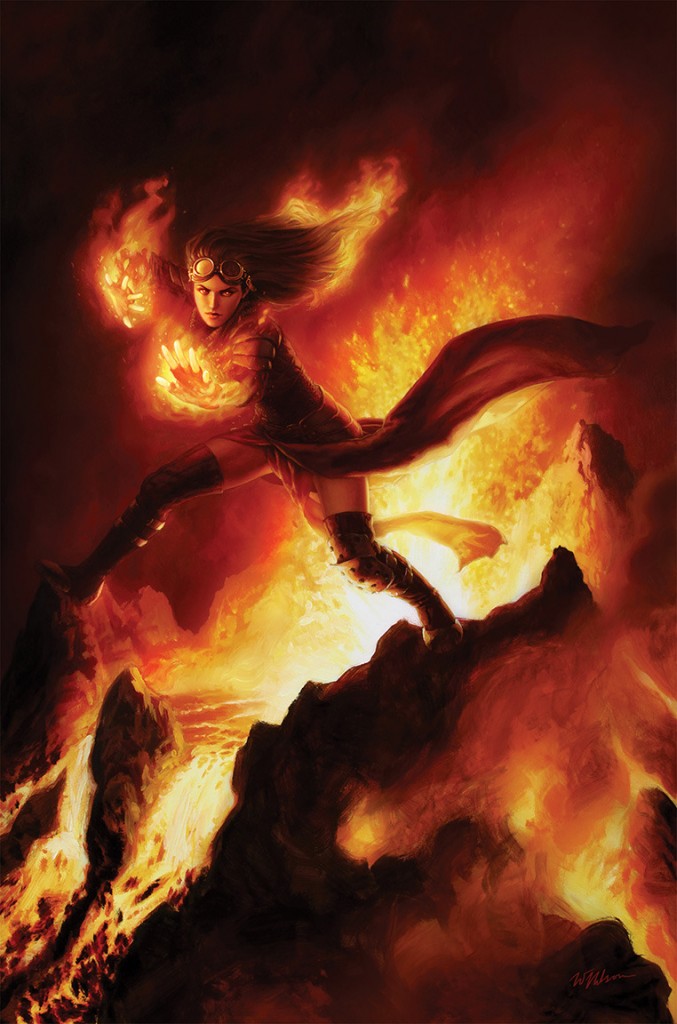 Let’s hope there’s something more interesting in this pack…

Since I’ve been picking red fairly often, let’s look at [card]Pitchburn Devils[/card] first. At 3/3 for 5, it’s not really there on the efficiency scale, but when we consider the fact that it tags our opponent for 3 when it dies, it becomes a very nice “damned if you do, damned if you don’t” creature. Your opponent is stuck dealing with a 3/3 every turn, or taking out somehow and taking 3 damage anyway. A smart opponent will take it out and take the 3 damage on the chin so they don’t have to deal with it over the long term, but the fact that the card forces the opponent to chose between two bad choices is great. Anything that returns the card to it’s owner’s hand or exiles it will get around the “dies” trigger, but that’s a counter that the opponent hasn’t used on something else, which is fine. Overall, I like this card a lot.

[card]Dawnstrike Paladin[/card] is another card that’s not terribly efficient at 2/4 for 5, but Vigilance and Lifelink make it a hell of a threat. It’s a great blocker because anything it blocks doesn’t get to you, and nets you 1-2 life (depending on the size of the creature blocked). I particularly like [card]Dawnstrike Paladin[/card]’s high toughness – it won’t get easily take out by something like [card]Shock[/card] or [card]Lightning Strike[/card]. [card]Nephalia Seakite[/card] isn’t terribly powerful at 2/2, but the juicy bit here is Flash. Being able to hot drop a chump blocker on your opponent’s turn can be awesome. At 4 mana, the efficiency here sucks, but what you’re paying for is the ability to screw with your opponent during their own turn, and that’s what Blue does best. I wouldn’t pick Blue up as a secondary color just for this card, but if I were already into Blue, this card would be an easy decision. [card]Deathgaze Cockatrice[/card] is great because of Deathtouch, plain and simple. [card]Vampire Warlord[/card] however, is the better pick, I think. At just one more mana than [card]Deathgaze Cockatrice[/card], you get two more power, and you can bring him back by ditching a chump, like the [card]Shadowborn Apostle[/card] we got last week. That’s pretty awesome. While he can be taken out by something as small as a [card]Shock[/card], he’ll just come back, and now you’ve cost your opponent a piece of removal, and you lost something far less valuable than a 4/2 creature. The best part about Regenerate is that you can keep doing it!

If I was already into Green, then I think the [card]Megantic Sliver[/card] is a great choice. It looks horrid at first glance, but remember that it is a Sliver, and benefits from the +3/+3, and is thus actually a 6/6.

[card]Warden of Evos Isle[/card] would be a great choice if already into flying (evasion) based stuff, and in or looking into blue. Blue tends to have lots of creatures with flying, and this makes them cheaper, which is always great. [card]Staff of the Flame Magus[/card] would be great, if it actually did something offensive. You can’t get it out until turn three, and you better hope you get it early, because it won’t help you much late game. It needs time to really earn back its keep, hopefully earning you 2+ health a turn (lay down a land, summon a creature or fire off a removal spell). I almost feel like this is a trap, but I can see it being last minute filler if you didn’t have anything that has a more immediate impact on the game.

[card]Essence Scatter[/card] and [card]Cancel[/card] are tempting, but don’t actually put any hurting on your opponent, and Draft and Sealed are all about aggression and offence. These just don’t do it for me. [card]Ranger’s Guile[/card] is fine, since you get +1/+1 for 1, but I feel like there are better options in Green, and that this is really a waste of space in your deck. [card]Growth[/card] is so much better. [card]Nightwing Shade[/card] is nice in that it has flying, but when you’re already paying 4 for a 2/2, I really don’t want to have to pay 2 more just to get +1/+1. I think pumpable creatures are rare in Black, so it’s cool that this is here, but I just see it as a mana hog.

What would you pick from here? Post your thoughts below!