Today, it’s time to discuss the fiasco that was Imperatus. 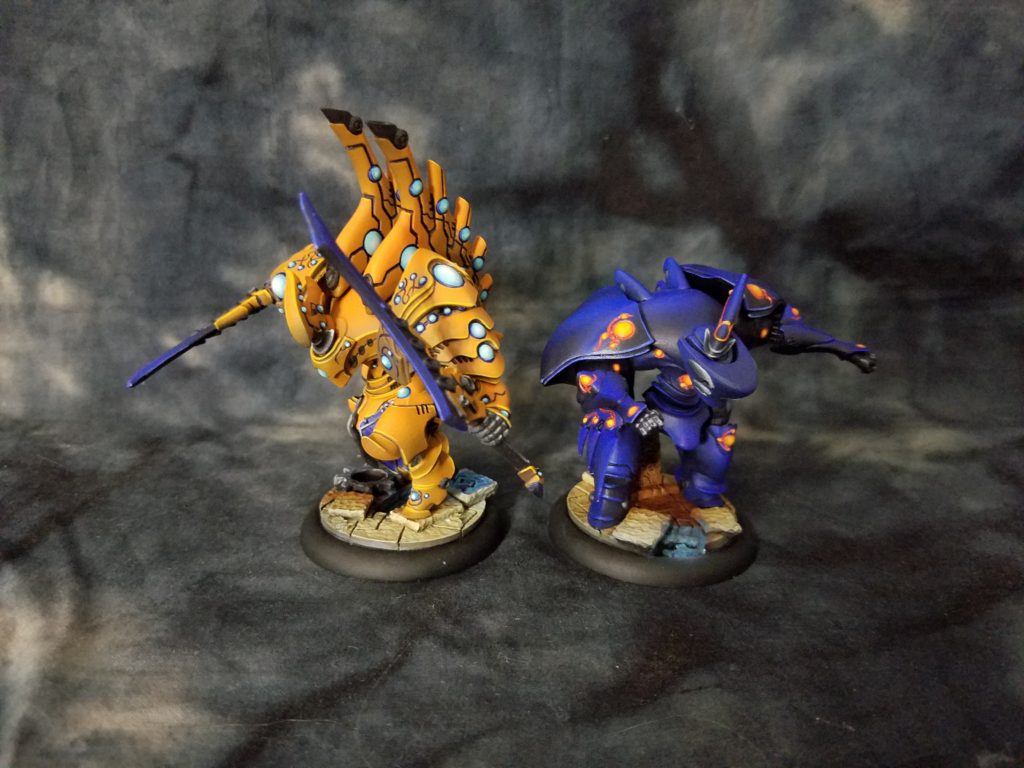 OK, it’s mostly my own fault, but I’m going to blame the model because it can’t defend itself.

Before I get into the details of what happened, I need to frame my mindset going into these models.

I have a day job; so the time I have for painting is the hour or two between getting home and bed, and weekends.  Since these are commission models and I won’t sacrifice quality for speed, I wanted to focus on being efficient with my limited time.  The more efficient I am, the more money per hour I’m making, and the models get done faster which makes for happy clients, the same way I can make money online with the use of different resources as online trading, which I do since I found a day trading for dummies guide which helped me to learn how to do it.

That was the theory, anyway.

So, after completing the test models, I set out to tackle a chunk of the first army for the Sunset Retribution commission.

Since I was going to be rearranging my work space for airbrushing, I wanted to make the time and effort worth it.  You know, to practice what I’d preached on assembly line painting being efficient and all.  So, I assembled and prep’d several models for paint all at once: two heavy warjacks, Helynna and all the solos for the first list.

Ok, so in reality, I was avoiding painting the two 12-man Sentinel units, so it’s everything else.  Yeah.

Ultimately, two problems with that.

First, assembly line painting is repetitive and boring.  Painting the same color for two hours is painful.  It really is.   While it may be more efficient, it’s not at all satisfying.  Painting for a long time and seeing such a small change on the models doesn’t feel good.  The progress isn’t very visible, and that makes the time spent feel wasted.

Second, the wall of models staring me down just beat the snot out of my motivation.  With so much work in front of me and so little feeling of progress each session, the project felt insurmountable.  This is something I’ve been really good about managing in the past, but I somehow convinced myself that having a bunch of models on my desk would magically not be a problem.

I was wrong.  It was very slow going after the airbrush stage.  What I should have done was put most of the models away after airbrushing and just focused on a few.  Which is what I did, once I realized why I was avoiding painting.

I decided I’d focus in on just the warjacks at first.  That way, I could get them done and feel some accomplishment in order to drive myself forward and keep momentum.  They were the biggest and most impressive models in the list, and if I figured if I got them done, I could ride the momentum and blitz the more numerous smaller models.

On Imperatus, I’d airbrushed the orange color, blocked out all the black areas, masked everything but the blades, and then painted them with the airbrush.  I’d started working on edge highlights, I was feeling confident and excited, so I sent an update to my client.

He responded that he liked the paint job so far, but he asked about changing the pose.

Let’s rewind a bit.  Before gluing the resin and metal model together,  I’d done some research on Imperatus poses and conversions online, and found one I thought looked pretty cool.    It was a wide, attacking stance that really gave him a “Come at me, bro!” vibe.  It also put his massive blades out of his center line, so may (just maybe) he’d be OK to stand base-to-base after a charge.  I was pretty happy with my choice.

As soon as he asked about changing the pose from what I’d picked, I remembered something: a key detail from the job discussion we’d had before the models had been purchased. He’d sent along some photos of poses he liked (some anime ninja characters with two swords) for Imperatus.  They weren’t at all like the one I’d gone with.

So, I tried to salvage the existing paint job by breaking one of Imperatus’ arms at the wrist and and re-positioning it.  But, it just didn’t work well.  Yeah, the sword was rotated, but it wasn’t in the high guard position which would require changes at the shoulder. 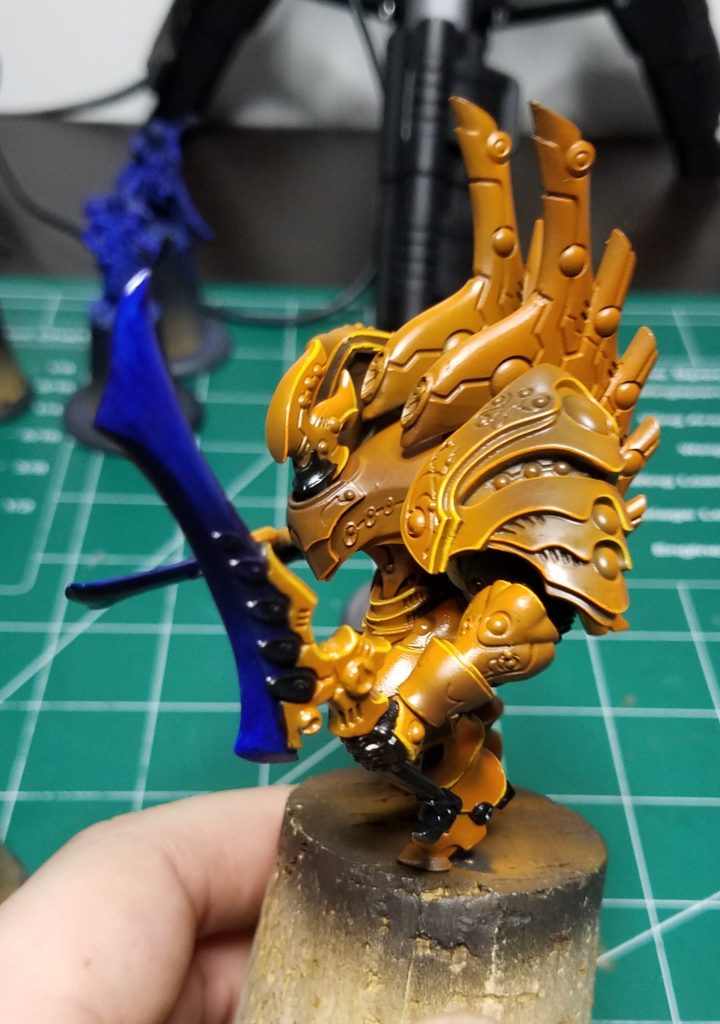 I wasn’t super happy with the existing fix to the pose issue, and while I was sitting pondering the model, I realized the orange didn’t quite feel right.  When I got out the sample model, it was much brighter than Imperatus was.  By comparison, Imperatus felt muddy.

Luckily, I know why.  Unfortunately, it’s my fault.  Again.

I’ve been watching Kenny Boucher (Next Level Painting), and one of his airbrush tricks when switching to the next color in your gradient is to leave a bit of the previous color in the airbrush pot.  This “marries” the two colors, much like leaving a bit of the previous part of a meal in the pan helps marry flavors while cooking.  So, when I’d gone from the Bloodstone layer to the Fire Orange layer, I’d left some Bloodstone in the pot.  This really killed the luster of the Orange.

That wouldn’t have been a big issue if I’d done a layer of pure Fire Orange afterwards.  Want to take a guess at what I didn’t do? 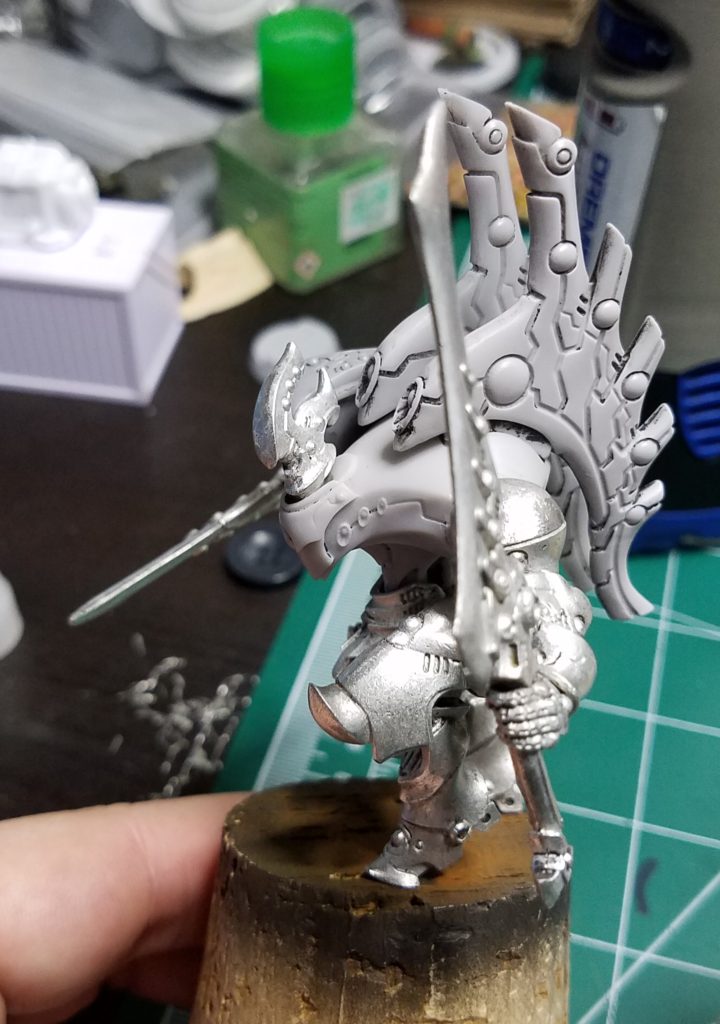 I stripped and disassembled Imperatus, nearly ripping his hollow torso in half in the process.  That’s what it felt like, anyway.  It was pretty scary, and I was fully expecting to spend even more time trying to repair a rip or having to ask for a replacement part from PP.

The final pose looks loads better, and has loads of ninja-y attitude.

So, at this point, I’ve been delayed because I’d overwhelmed myself with too much to do, I’d fiddled with and ultimately re-started a 75% finished model, and I’d nearly destroyed the model in the process.

Efficiency.  This is leading by example, folks. It’s the small things that keep you going, sometimes.

AT this point I’d forced myself to slow down, and focus on doing things right, rather than doing things quickly.  This mistake is more about shortcuts and lack of adaptation than blatant stupidity.

On the soldier sized models, layering works on the glowy bits, because they’re just so small.  Your eye just blurs the layers together because they’re so close.  You’re tricked into beloeving there’s a smooth transition there.  However, on Imperatus’ shoulder pads and back fins / antennae / aerials the glowy bits are HUGE.  Layering didn’t work for those very well.  I could see the lines between the layers, and that just wasn’t good.  It wasn’t the quality the client was paying for.  So, I gave the model a gloss coat to protect everything I’d done up to this point and then carefully repainted the largest gems with the brush and then highlighted them with the airbrush.  I then used q-tips and alcohol to clean up the overspray.  Some careful brush painting to darken the borders, and I was in business. 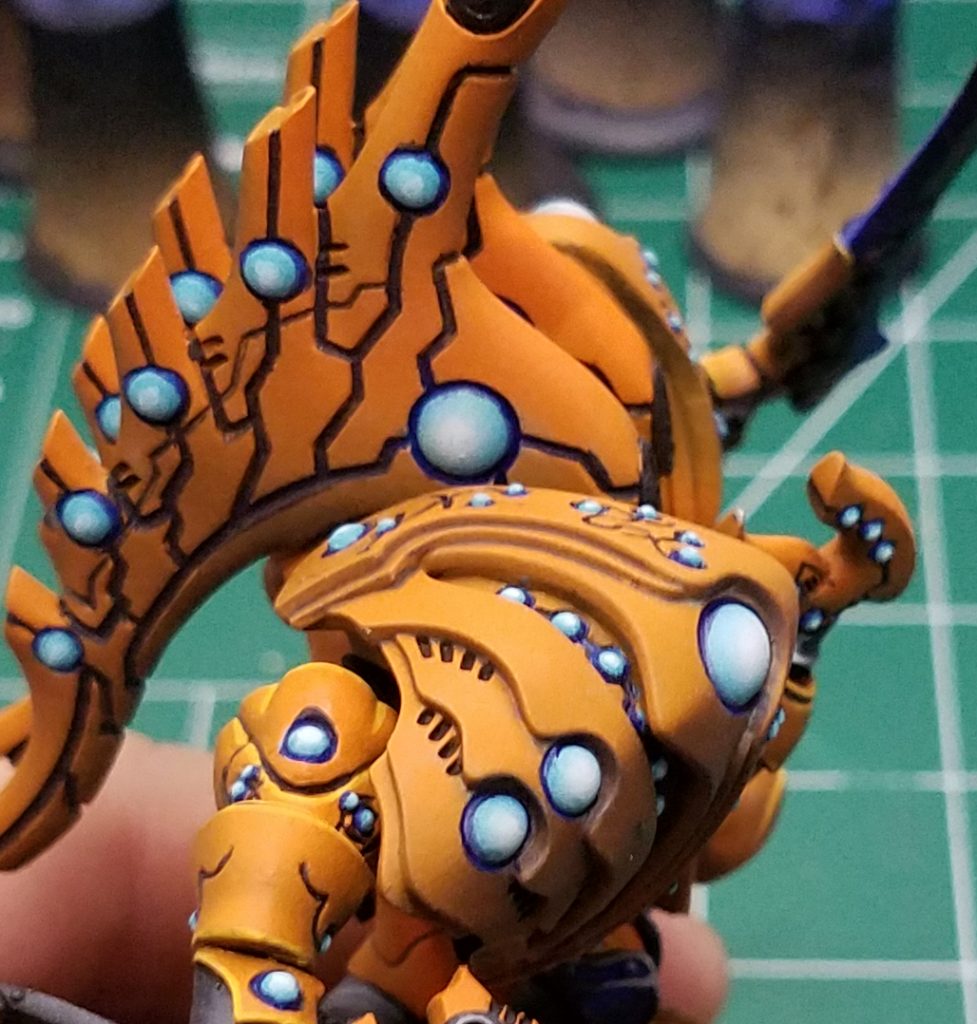 So, not a colossal mistake, but still.  Repeated work that took time.

By the way, doing things over and over again is like, super efficient.  This is how the pros do it.

I was so focused on being fast and efficient, I overlooked obvious clues that things were going wrong, and in my rush forgot about things my client had very explicitly asked me to do.

The main take away from this, for me, is that it’s by far more important to be satisfied with what I’m doing and the results I’m getting, than with the speed at which I’m working.  I’ve slowed down since working on these warjacks and I actually feel like I’m moving faster than I was before.  It sounds backwards to what I’d believed, but it’s working and that’s what matters.

Another good take away is that mistakes should be learned from, and they can always be overcome.  I mean, just look at Imperatus.  He looks awesome: I really enjoy painting for other people.  It’s a huge source of enjoyment for me; helping make someone else’s vision come to life.  That’s the essence of the creative process, and one of the main reasons I enjoy this hobby.  What I’ve learned from this is that I need to focus more on results and progress than speed.

A fantastic side benefit of focusing more on one model at a time is that models are getting completed faster, which makes my updates to clients look better and give them a better sense of progress, too.  Telling them that I got a model or two done that week is far more satisfying for both parties than telling them that everyone’s belt is painted.

“Wahoo, painted belts!  That looks awesome!”
– No one, ever.