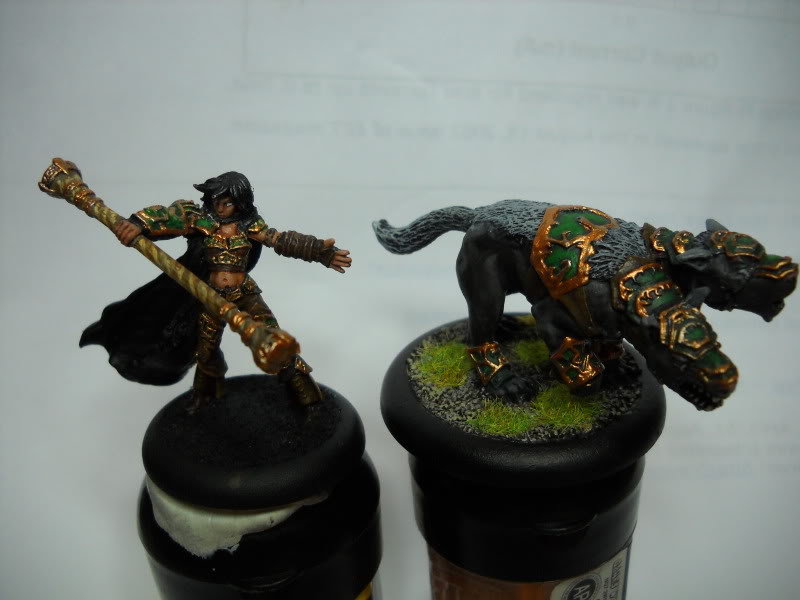 So, I’m painting a Circle Orboros warpack for a friend.   I already had an Argus painted, so I was effectively 1/4 the way done already!  He wanted a very traditional scheme, so I’ve been working on the warcaster Kaya in my free time (I’ve been tired and sick lately, on top of really trying to clean up around the house).  Here’s what I am after about 2 nights of time on her (~4 hours a night with TV shows or movies on, so realistically 2 hours a night):

You’ll notice I’ve bronzed the silver the Argus had last we saw him.  It really makes him pop – previously the model looked very dark and bland.  I’m particularly happy with pKaya’s face (oddly enough, painted during an episode of Lie to Me).

Her cape will remain black, but it will get mild highlights.  I also need to do her base to match the Argus’ base.  I will probably wait to do bases until I’ve gotten the other Argus and the Feral Warpwolf to that stage.  I’m thinking the Feral will be some nice shades of brown and the other Argus will be sort of beagle or collie colored – medium brown and white spots or something similar.  I just hope that doesn’t look too gimmicky.  If it does, there’s always the paint stripper!

Anyways, I owed the blog an update, so.  That’s what I’ve been up to.

Oh, here’s something else I was up to.  While sick with that nasty cold last weekend, I got all these based while watching a movie marathon (Batman Begins, Batman: The Dark Knight, Star Trek (2009))

That’s the Legion of Everblight Warpack (the old one), two Stingers (Thanks Andrew!), a pair of Harriers, a Nephilim Bolt Thrower, a Raek, and a Sorceress on Hellion.

How to strip paint