Wednesday, I played a 35pt version of my eventual 50pt Vayl2 Hardcore list. 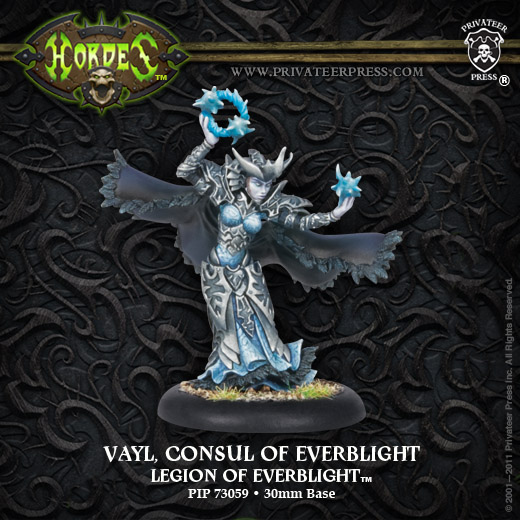 My opponent, Paul, threw Kraye and a Stormwall at me.  It also looks like he was a point over, but we won’t hold that against him.

Our scenario was #4, Process of Elimination, which put two rectangular zones and two evil, enemy contesting objectives in them.  Monoliths, of course.

I won the roll off and chose to go first, in true Legion style.  I set up the Scythean opposite one objective, the Angel opposite the other and the Ravagore dead center to soften up whatever it needed to.  I threw Vayl2 down off center behind a wall, and put down a Shepherd to assist the heavy furthest away (just in case), the Scythean.  I then set up a Harrier and Shepherd on my far right flank to be a harasser / late game worry for Paul.  I did my usual “activate this first so you have time to forget about it during my turn so you forget to deal with it during yours” schtick.  It works better when there actual trees to hide the model behind.

Paul put the Stormwall dead center (pre-deploy) and then put the hunter + rangers on one side, and the Centurion on the other.  Jr hung out behind Kraye. I ran everything, the Ravagore fired off a shot at the Hunter looking for a good drift and didn’t get it.  The Pot got Occultation, to keep it around for as long as possible, the Angel got Refuge, since I figured it would get the alpha strike in and might need to get out of the Ravagore’s way.  Vayl got Admonition in case the Centurion found its way through.  She hid behind that wall like a boss.

Paul retaliated with a bunch of running of his own. After which, I attempted to set Kraye on fire, which I succeeded at doing, despite missing the shot (distance).  Fancy Advanced Deployment Fire Token is Fancy.  Also, 3″ blast template with the Lost Hemisphere Astrolabe is courtesy G’daybloke.  It’s my favorite Flare / Scather template ’cause it’s so bright. 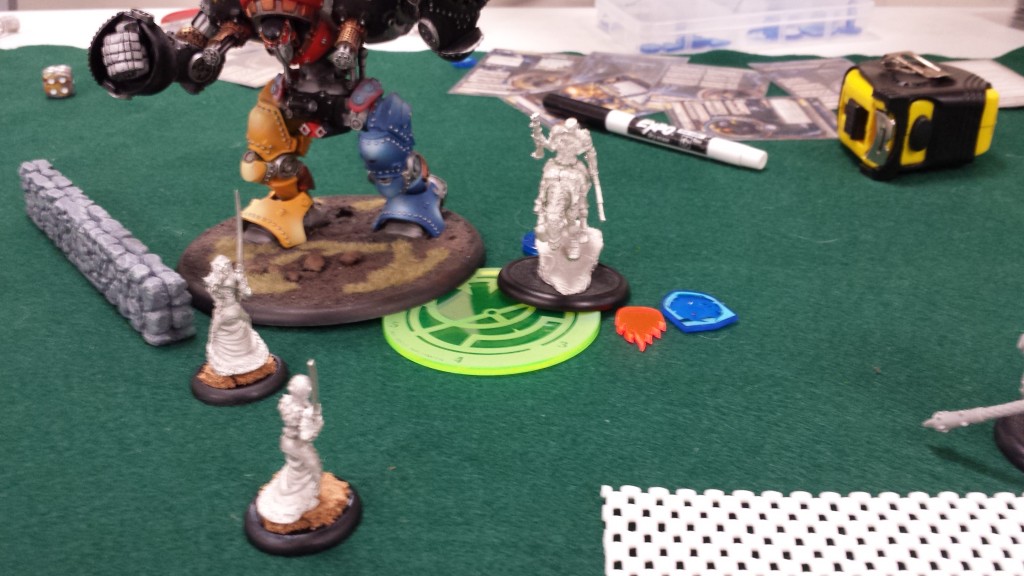 I kept feeding Paul Legionnaires to kill while getting my big dudes ready to kill an objective or two.  On Paul’s turn (the first scoring turn) he was forced to trample to the objective on my right with his Centurion, and only got two attacks off, and failed to kill it, leaving it on five.  Up to this point, his Hunter had been taking chunks out of my Scythean, and not threatening the objective on my left.  I had to claim the weak objective now or just give him the point next turn.  So, the Angel did it’s thing, and the objective on my right disappeared.  Then I walked up the Ravagore and tried to chuck the Centurion out of the zone for an additional point.  I hit, but failed the strength contest with a five on two dice, against his lone six. 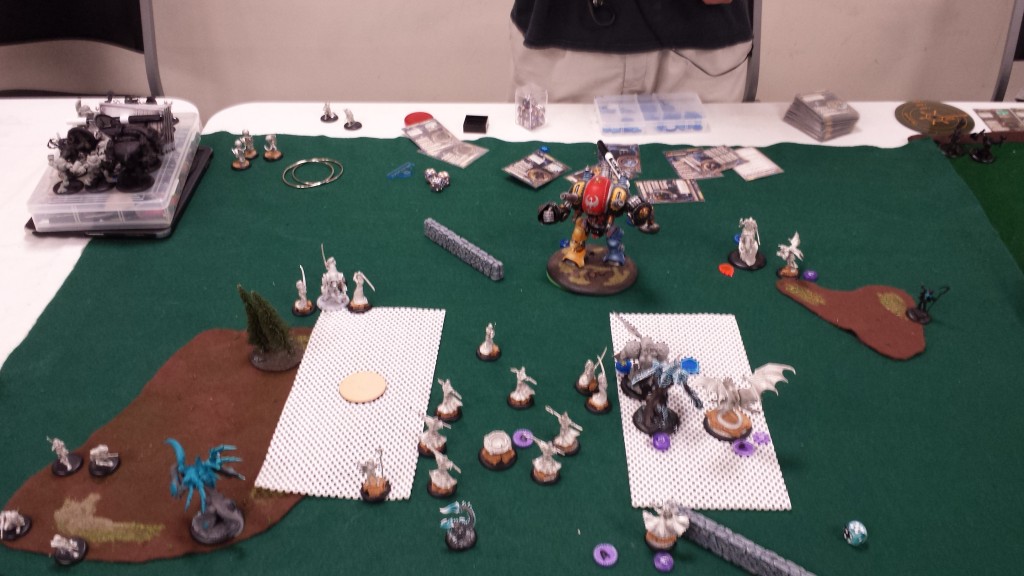 Did I mention that my late game harasser failed to make it’s charge on Kraye by less than a quarter inch?

Then we realized Kraye had Killboxed himself. +2 CP for me!

If you look closely though, you’ll see I managed to box in the Hunter with three Legionnaires, buying my Scythean a round of relief from the Long Arm.  Since it has parry, it could have walked away from two leggionnaires, but by boxing it in with three, it couldn’t move and was engaged, and thus had to kill one, wasting its activation.  Go me!  (I was pretty proud of that maneuver.) The Scythean decided it needed to saddle up and do something, so it took out a pair of Rangers.  whoo hoo.  I made a Stinger from the pot, thinking it’d be a great cruise missile to aim at Kraye, but I changed my mind after I’d placed it, and I had it go the other direction,  trying to use it as an arcnode against the Rangers to tag them with Icy Grip, but I misjudged the distance again and they were out of range. If I’d ran it an extra inch or two OR thought through my plan and deployed it in the right direction, I’d have been fine.

Kraye ignored the Harrier (being proxied by a Gargoyle), and was in a tough position.  He couldn’t afford another killbox, but he didn’t want to move any closer to the Angel or Vayl.  He had no choice though, and ended up not doing a whole heck of a lot (mainly missing the Legionnaires Unit Leader) other than popping feat.  Jr killed the flank Harrier.  Sadface.  The Centurion then killed the two Legionnaires nearby and put some damage into the Ravagore.  The Stormwall charged and finished the flame spouting beastie and then killed the Angel. The Hunter freed itself, and the Rangers picked off the Scythean’s shepherd.  But hey, the stew Pot is full again! 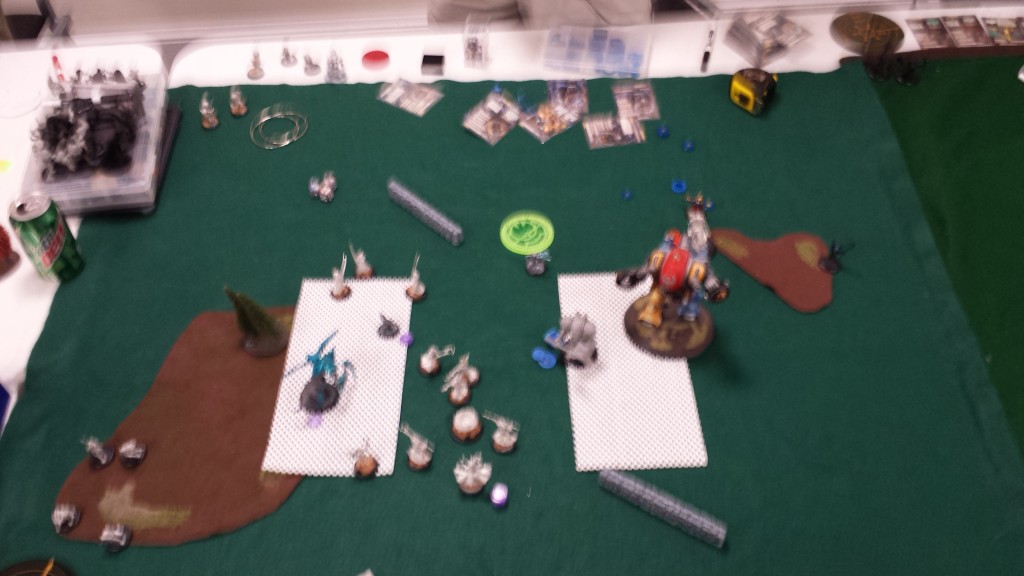 Anyway, Legionnaires tagged the hunter a bit from Vengeance and then the Scythean easily took care of the other Objective, putting me at 4 CP (objective + 2 from Kill Box + objective).  The Legionnaires again attacked the hunter, but left it on a fair bit.  The Pot spawned a Shredder, which went rabid and chomped it twice.  At that point, Vayl had to finish what no one else could.  She tagged the Scythean to be her Arcnode and double boosted a Feat Oblit.  It made it through the melee, and finished off the Hunter, giving me the Left zone for control point number 5.

Overall, this was a really fun game.  Most of my tactics in the end came from Paul, who showed me that I needed to keep 2 FURY on Vayl, or he would have used a Lightning Pod to clear a path for a  full tilted the Centurion to walk around the heavies and put a spear into Vayl under Kraye’s feat (boosted hit rolls).  I was going to leaver her on just one, but that definitely was a scenario I hadn’t even thought of.  Since that forced him to take out the heavies instead, I knew I needed to focus on the other zone, sincethere was no way one half dead scythean was going to take out the Centurion (under AS the entire game) and the Stormwall.

I really enjoyed the list, and I really enjoyed Vayl2.  I would love to swap out the flank harrier for a Stinger (Poison!), but I need three beasts with flight for the Tier bonus.

Anyway, post your thoughts on this battle below.  They’ll be helpful while I play this for the next few weeks until I get more stuff painted and assembled before the NOVA Open.