I know this is coming out late in the day, but since it’s still Tuesday, I figure it still counts.  So there.

One of the things I did for the Titan Exchange was a Hunter for friend Northblade, of Hobby Hysteria.

I knew I wanted to do freehand on that nice clean top of the hunter, and a Cygnus was as good a thing as anything else.  The stock scheme uses yellow for the Cygnus symbol, and I know from experience that yellows are terribly transparent, and would have a ell of a time covering the rich, deep blues I was going to use.  So, the yellow needed to come first.

This meant that I would need to paint the Cygnus using negative space – ie, painting all the stuff that was not the Cygnus.

I figured I should practice this first, so I got out a pencil and a sheet of paper along with my Forces of: Cygnar book as a reference.  The sketch wasn’t going to be the proper scale, I just wanted to work out how to construct the Cygnus backwards – without getting any paint or pencil marks “inside the lines”.

I start by marking out the top, bottom and outermost points of the rough oval I will be filling.  Since these are roughly my bounds on the ‘jack, it’s important to know how to work from fixed references. 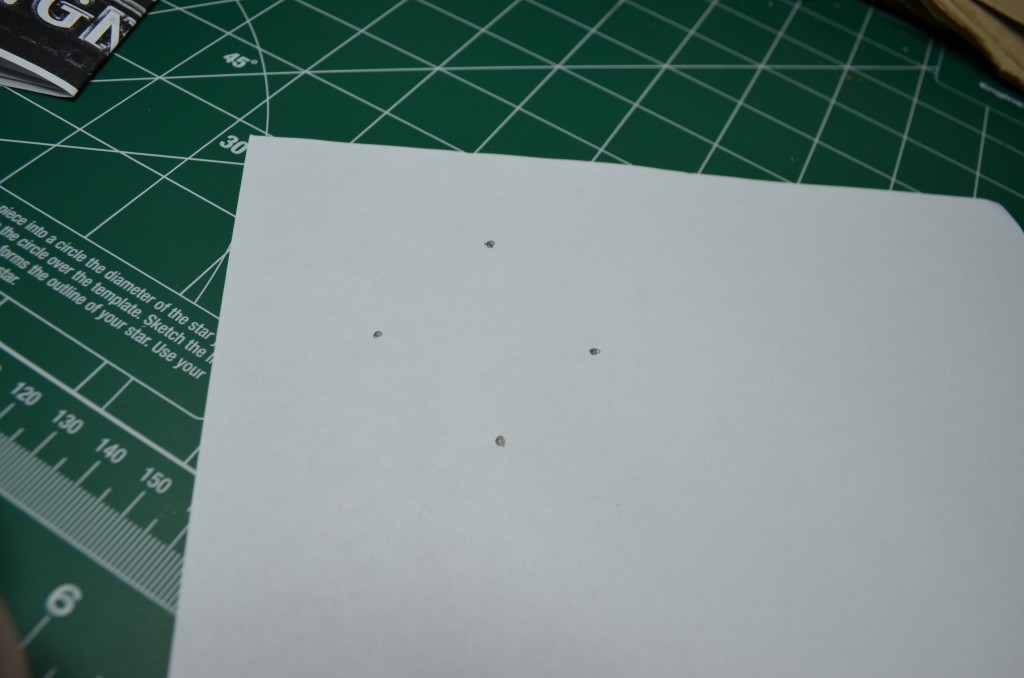 I sketch out an oval, but with a pointed top. 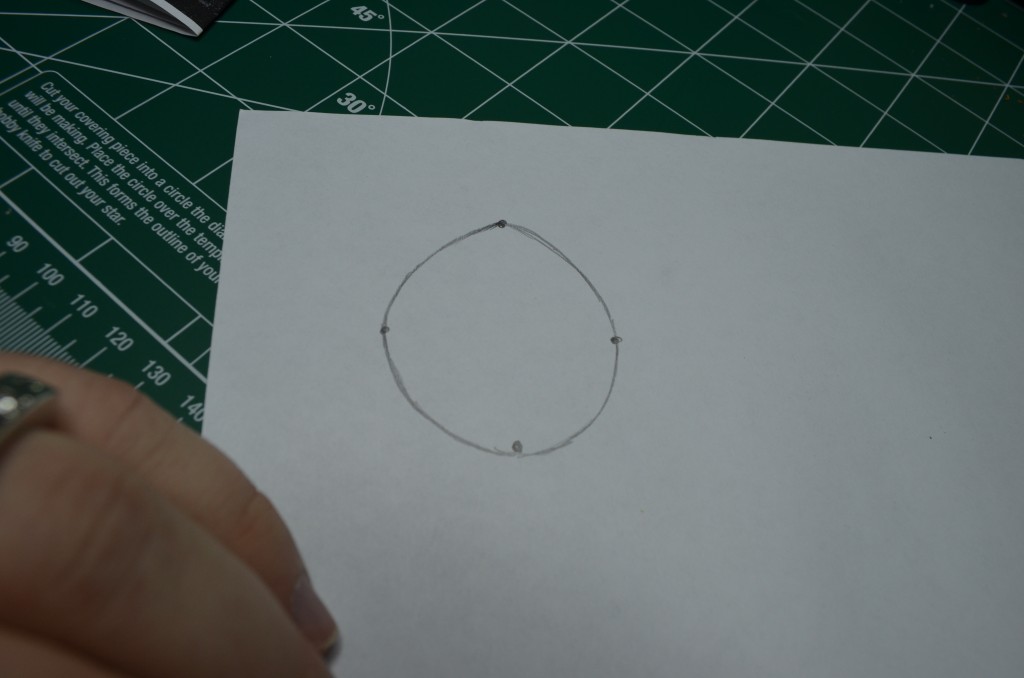 Two circle go on each side, about one third the way up to the middle marker.  I guess at the first one, and then start small on the second one, slowly making it bigger until it matches in size.  Remember I’m only allowed to draw (paint blue over white), erasing (painting yellow over blue) is not allowed for this exercise. 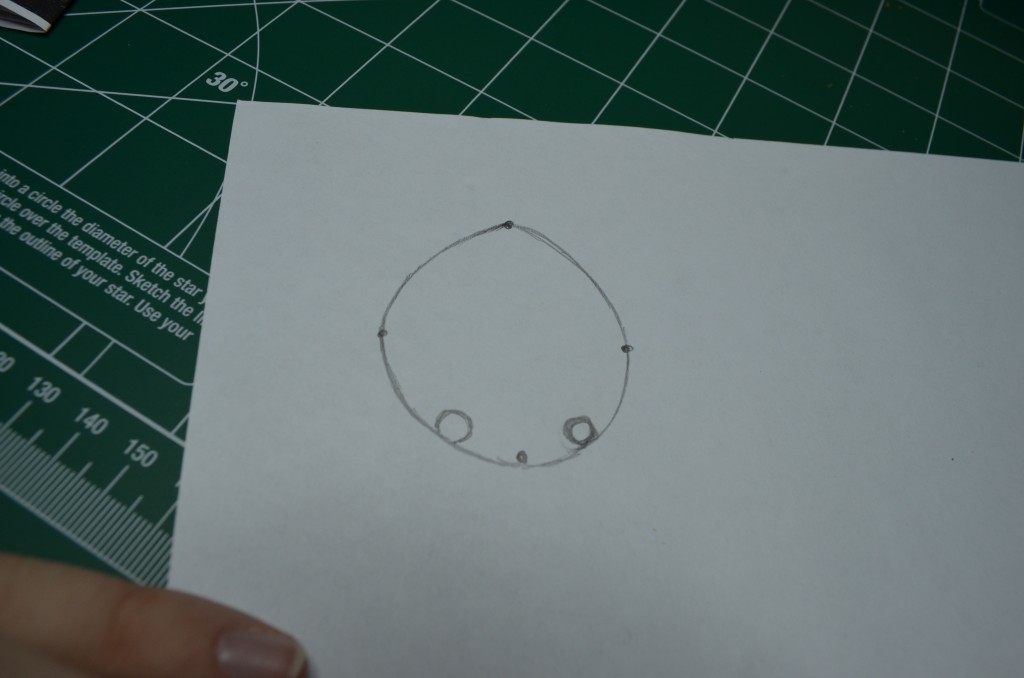 I draw in the sides of a teardrop, whose bottom would be roughly at the mid-point of the oval. 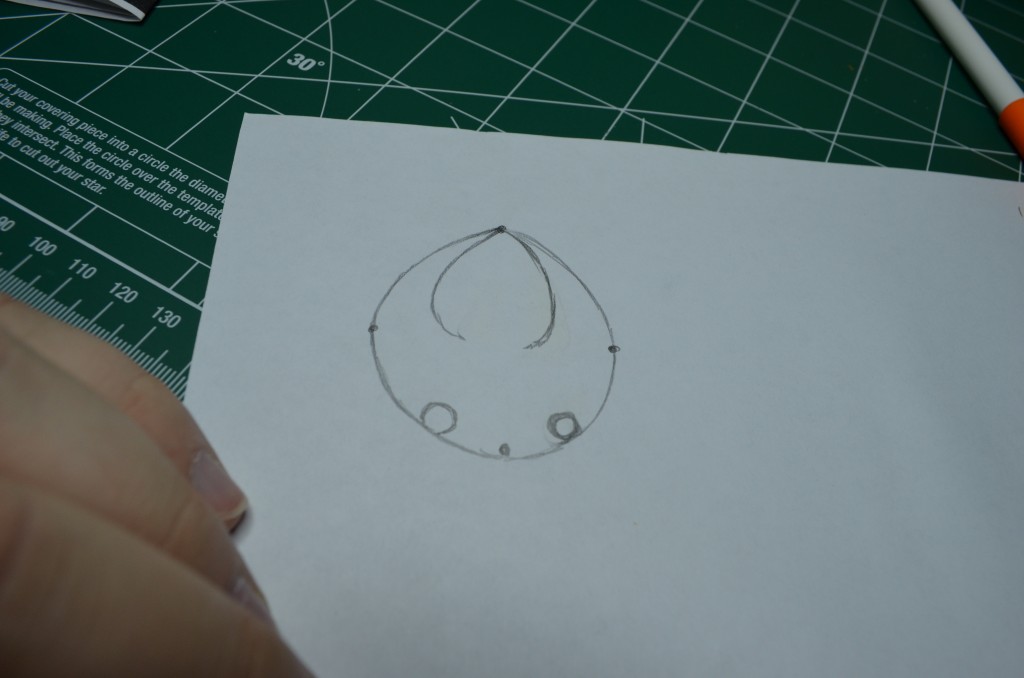 The head peaks at about the middle of the empty space in the wings, so I mark it with a line. 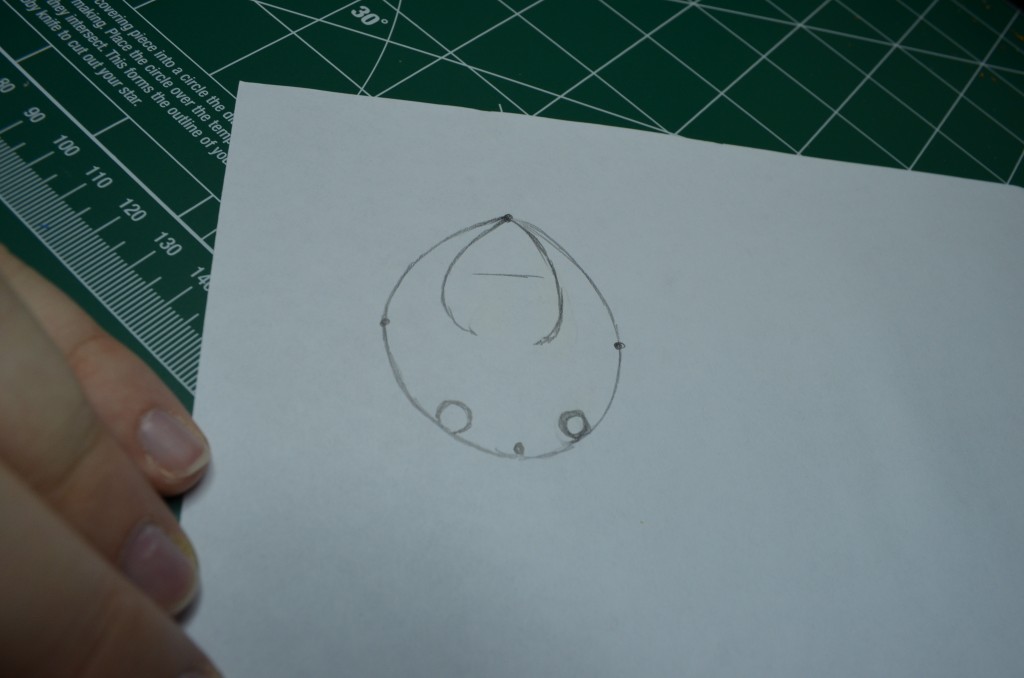 I sketch out the back of the neck & head, taking care to replicate the small indent that signifies the separation of head and neck. 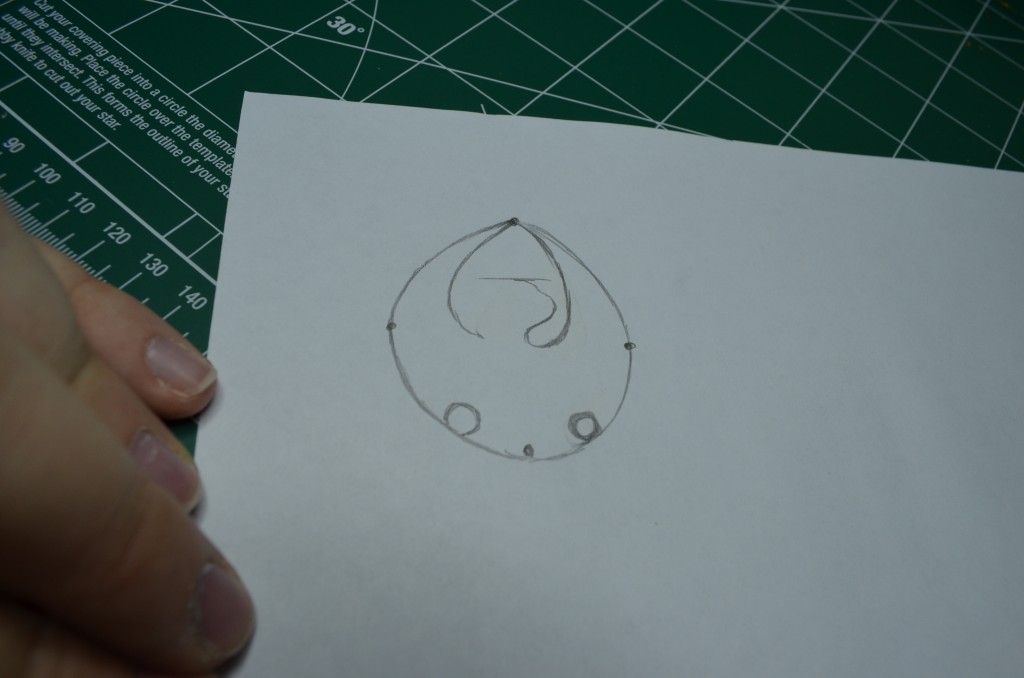 I build up the front of the neck. 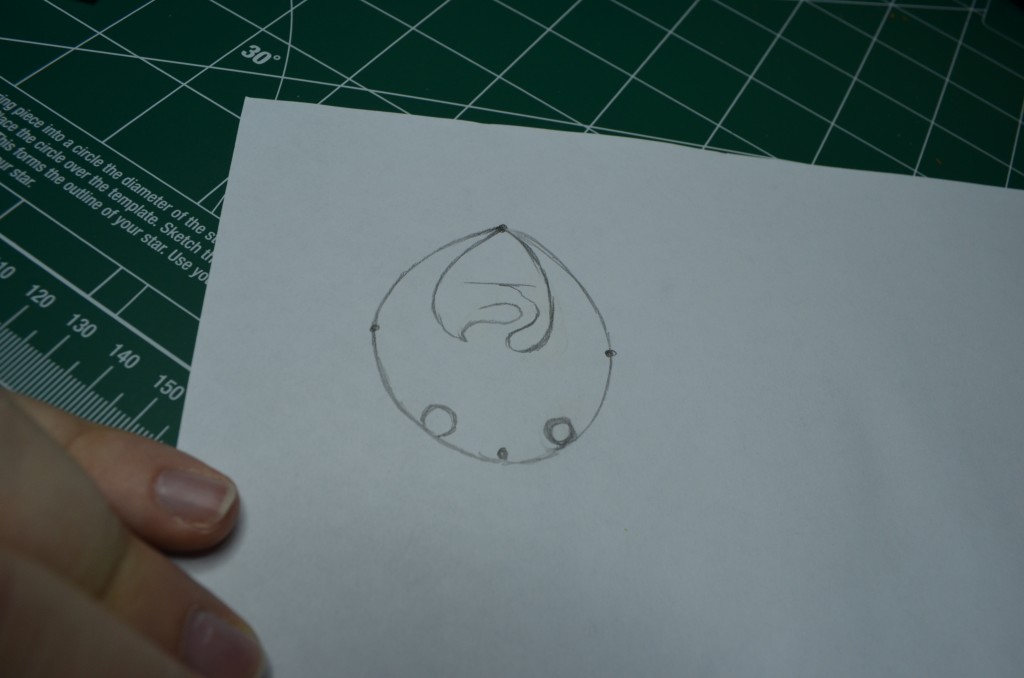 And finish with the bill and front of the head. 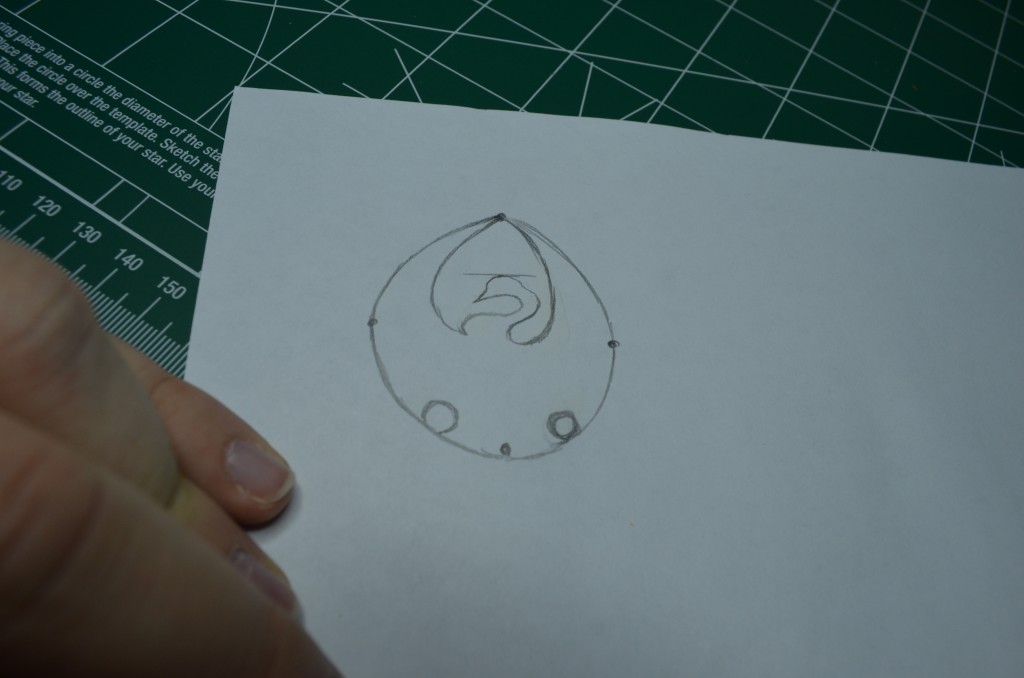 Lastly, I put in the notches in the wings that imply feathers.  These are downward cuts that roll off the top portion and leave a sharp point on the bottom section.  The top one goes about halfway between the mid-point marker and the top, and the bottom one goes halfway between the circle and the mid-point marker.  This nicely divides the wing into three portions, longest on top and shortest on bottom. 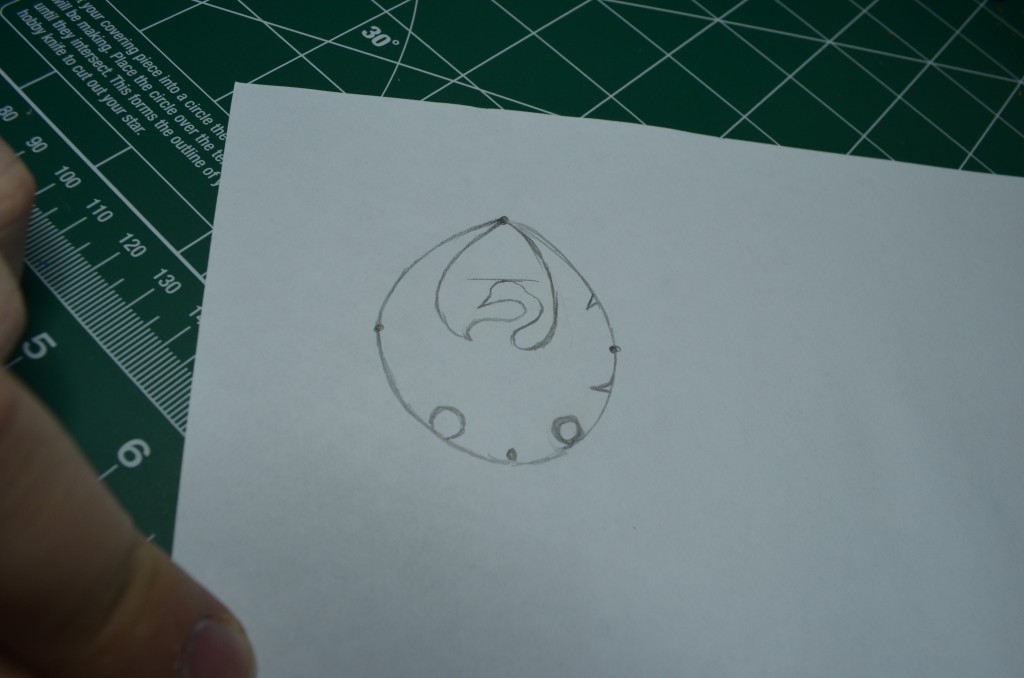 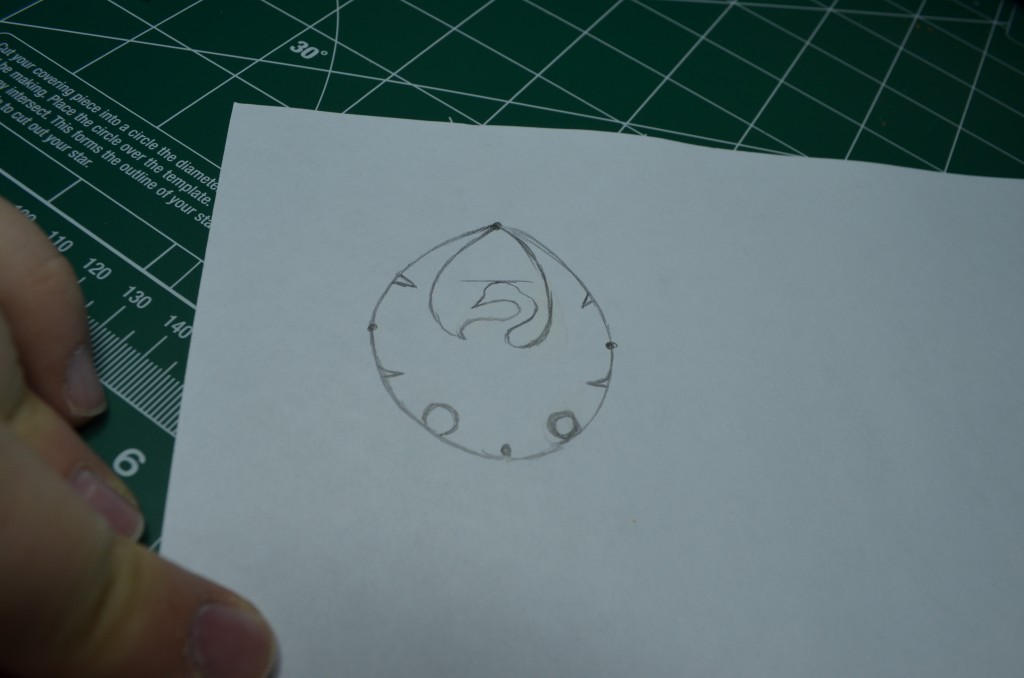 And that’s the finished Cygnus.  Now, to repeat that process on the Hunter…

I started with an airbrushed on yellow base.  I pre-shaded and highlighted it, with the main “bright” center being on the upper right quadrant (as you look at the jack’s face).

I started by blocking out a squarish shape, bounding my work area. 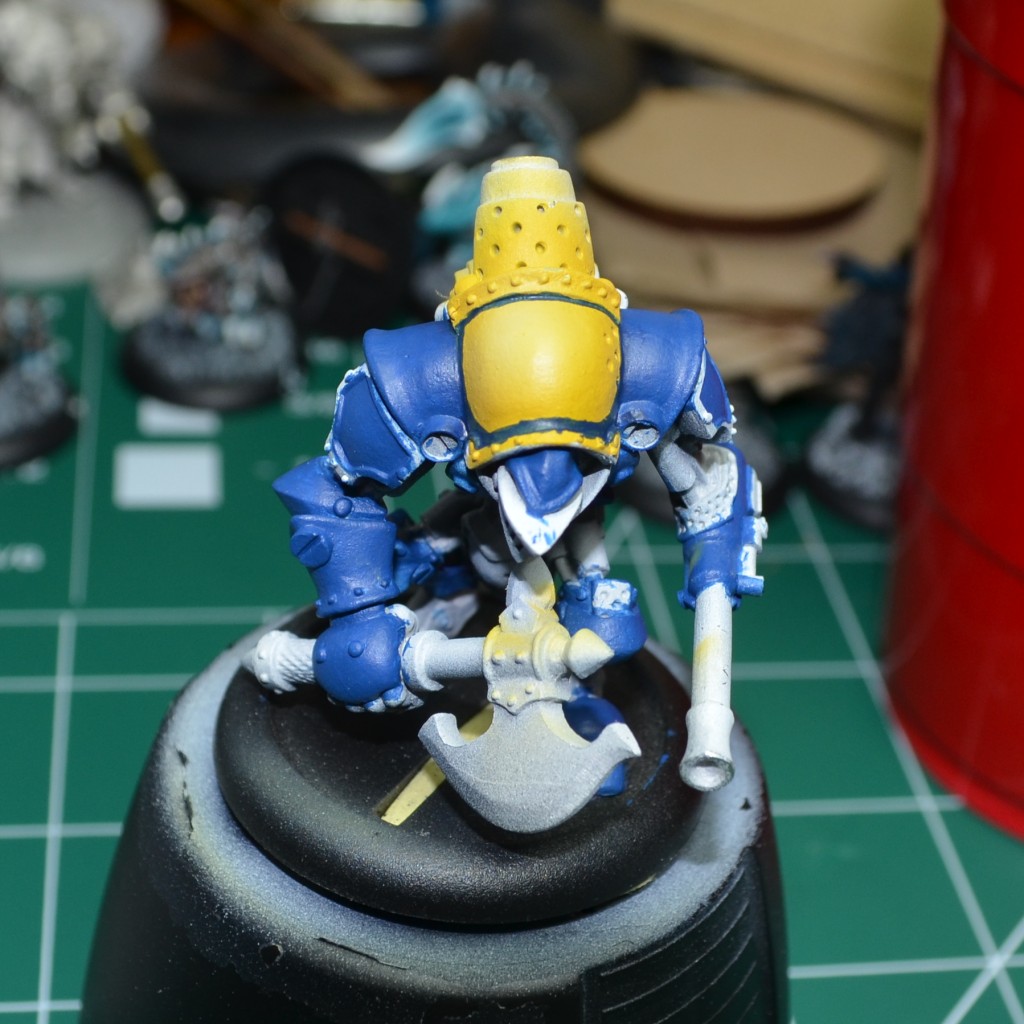 I tightened it up a bit, defining the exact reach of the Cygnus. 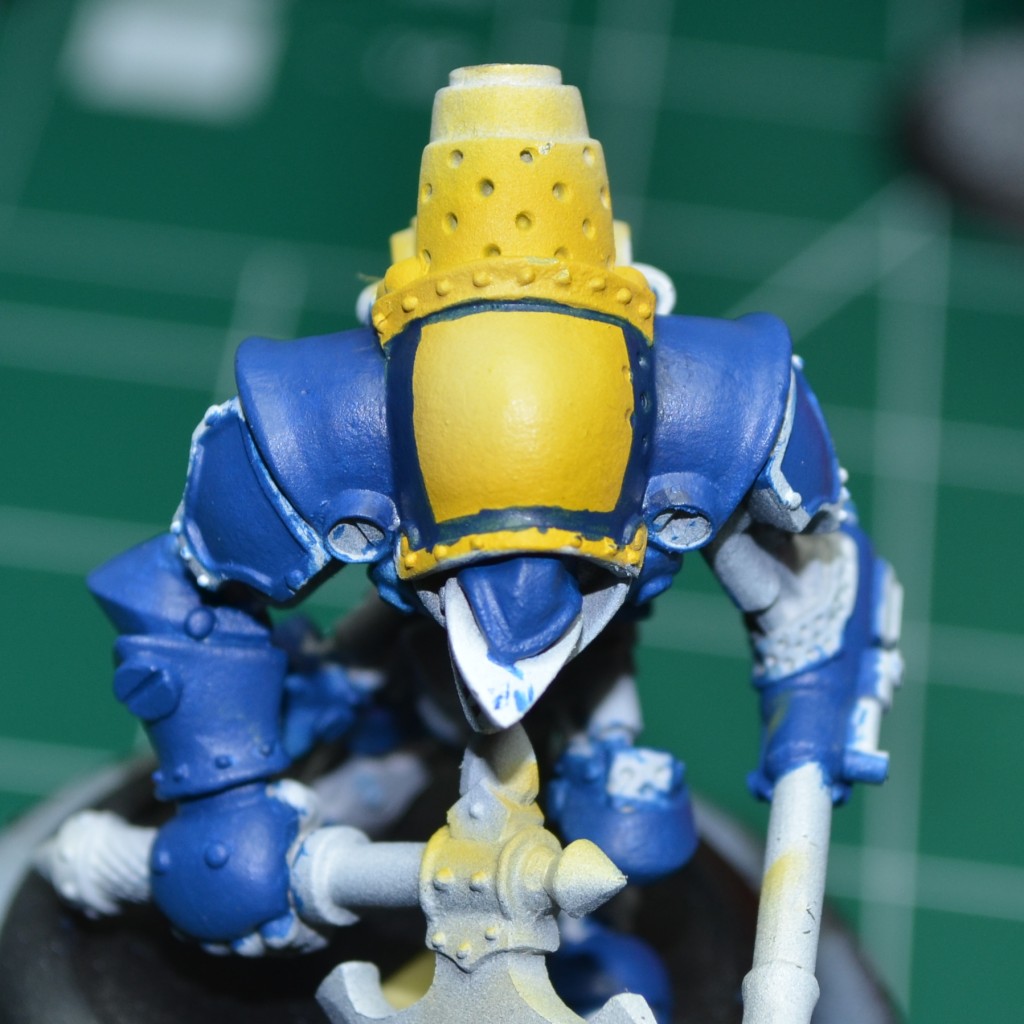 I rounded off the corners to get the pointed oval. 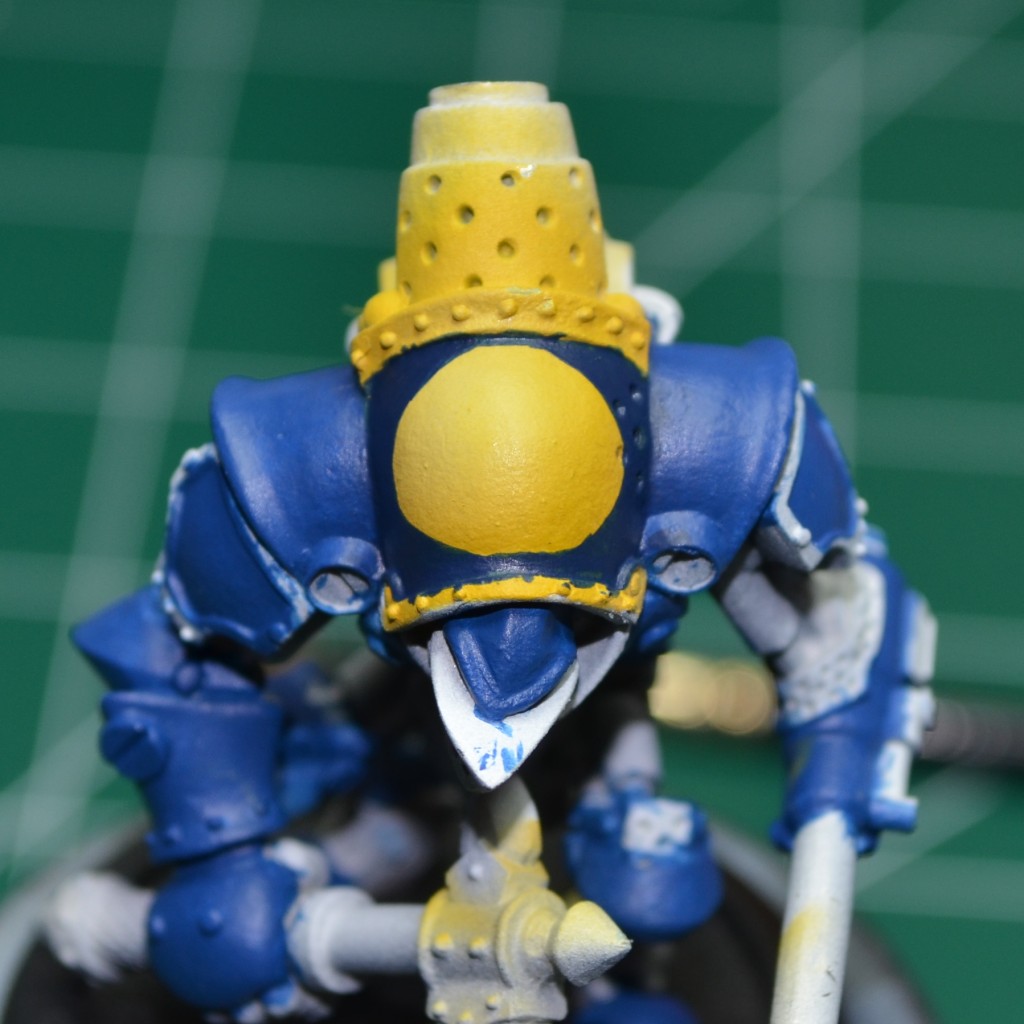 Two circles, which ended up more like a ‘U’, and some cuts to define the tail. 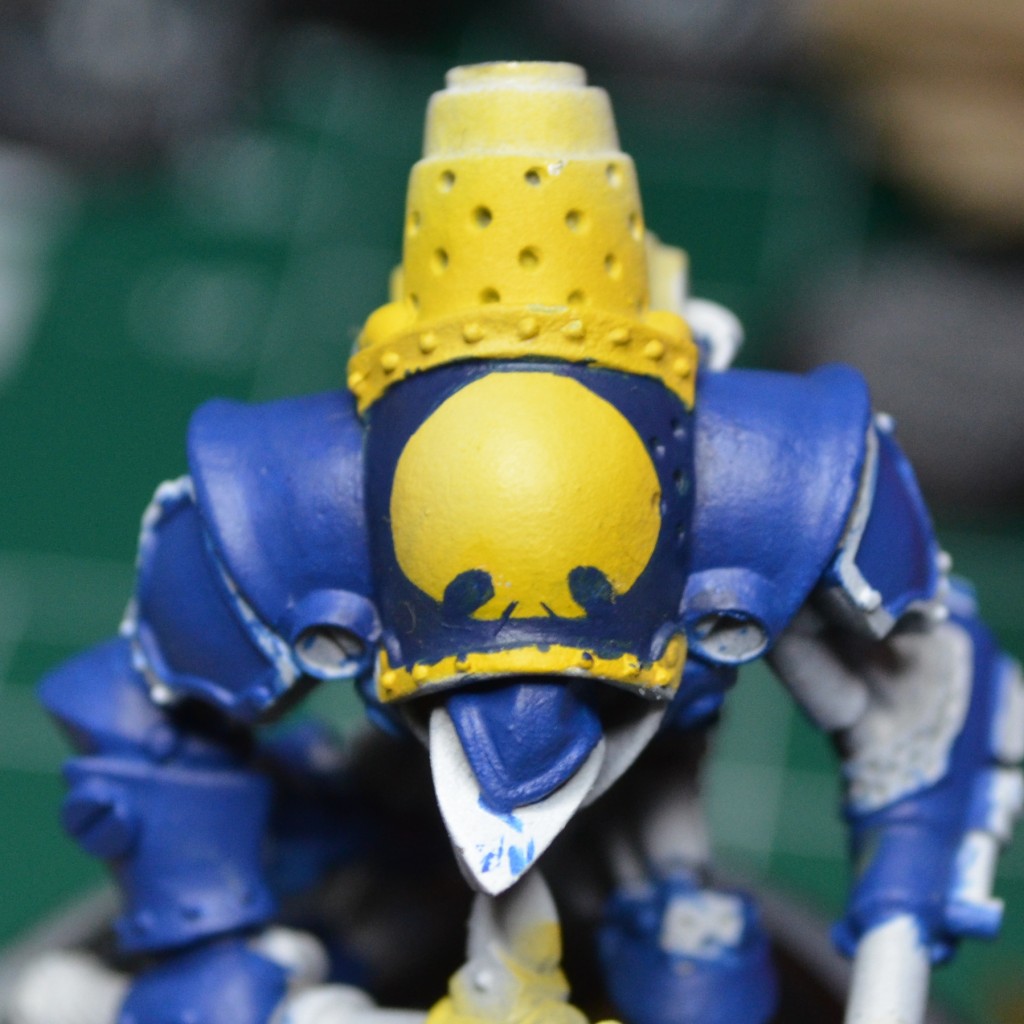 I increase the size of the circles to cover the mistake. 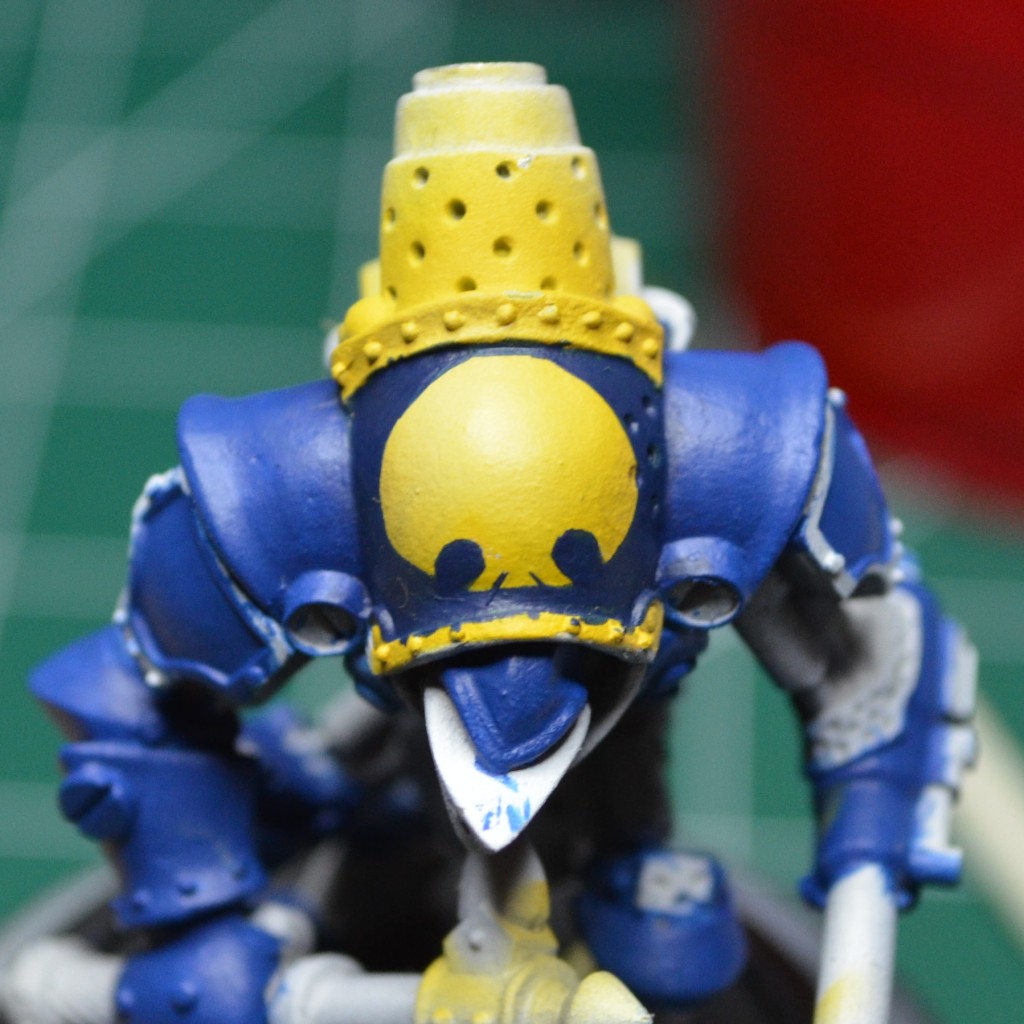 I drop in the teardrop like sides and mark the top of the head. 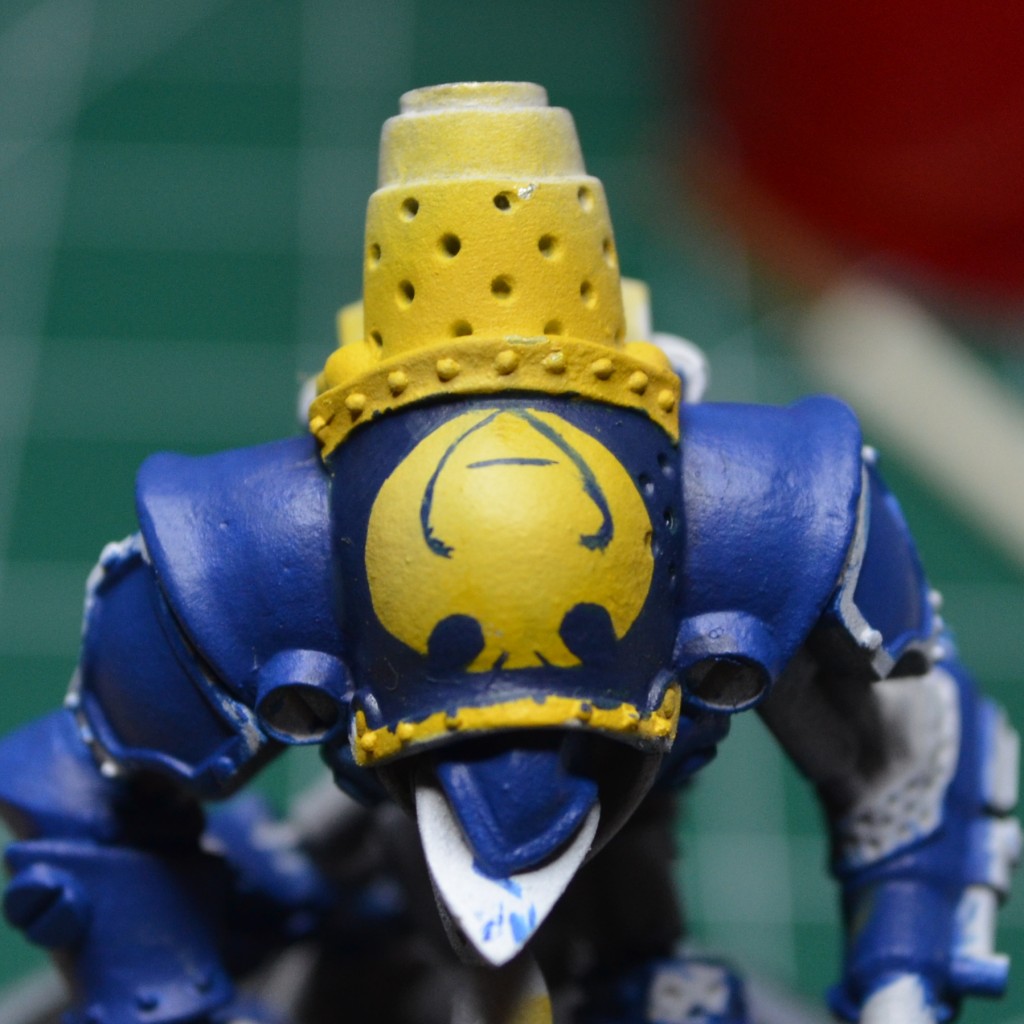 Back of the neck and head. 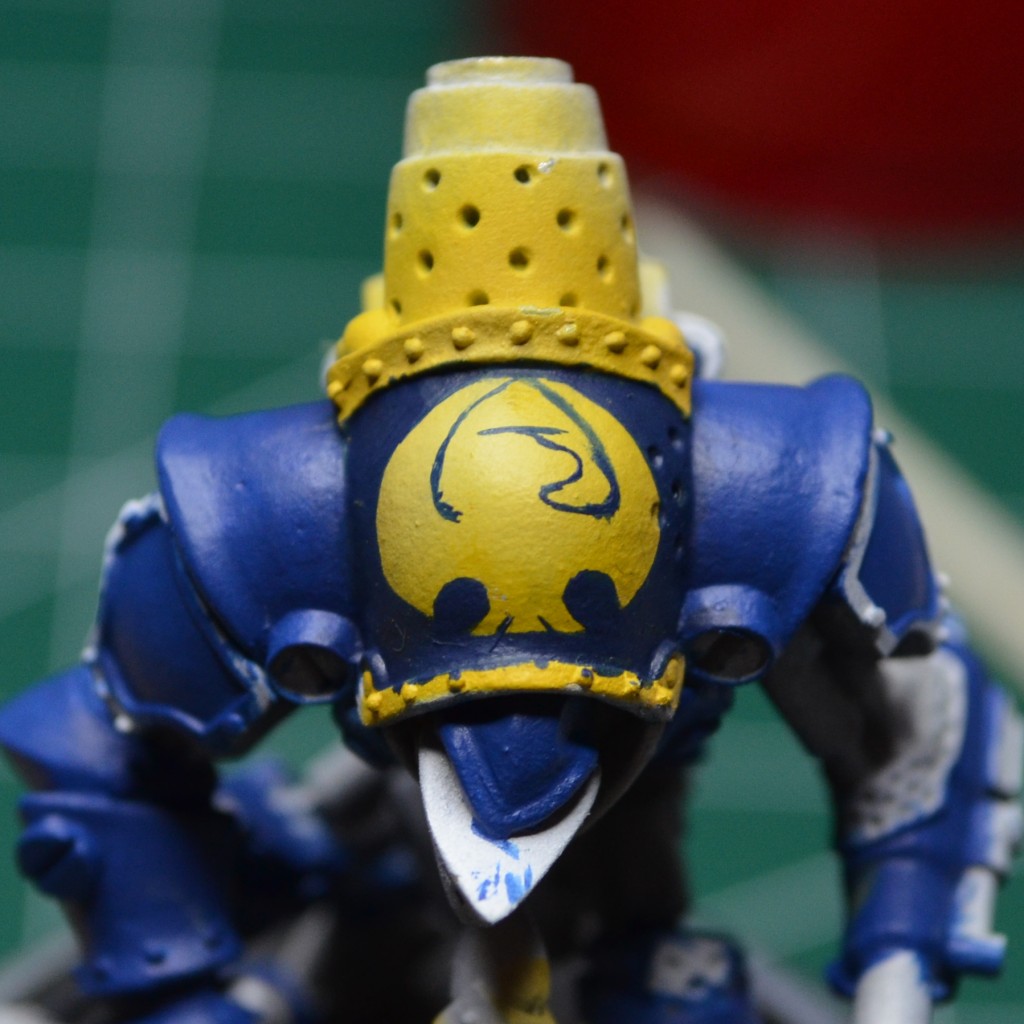 Front of the head and neck. 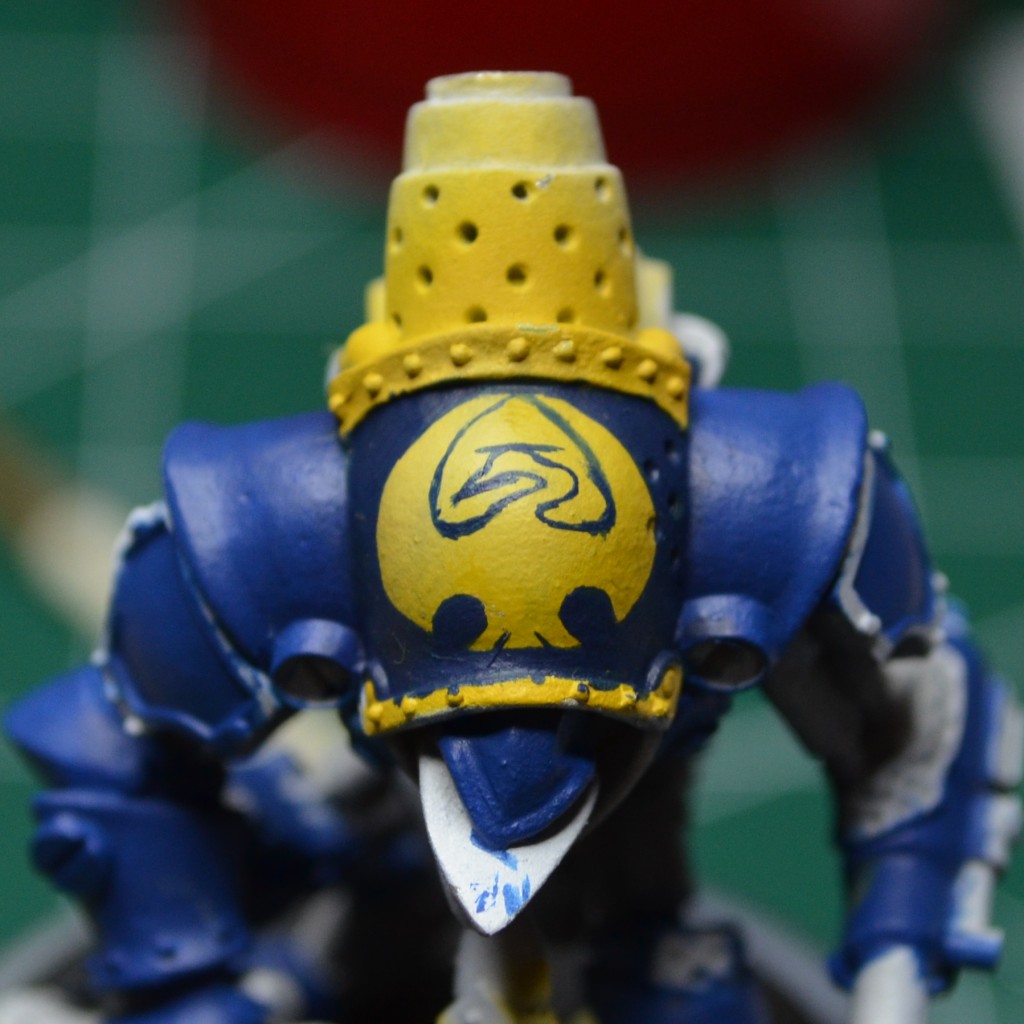 I then fill it all in and start highlighting the blue up and doing some 2-brush to blend into the base coat color.  I also add in the wing cuts.

I stylize the tail a bit, since it was rather bland with just the cuts. Here’s the finished model, before sealing and final highlights: