We have a Journeyman League starting up in a few weeks, and the first tier is a 15pt Highlander army.  For those unfamiliar with the format, it requires an army to have one unit, one solo, a warcaster and then you can fill with Warjacks/ Warbeasts, but they’re all FA:1, so no duplicates (like twin Hunters or Berserkers).

It’s a great way to start off a Journeyman league, since it forces participants to have a unit and solo painted, and with the 15 pt restriction, it also usually comes down to a Heavy and a Light Warjack.  Overall, it’s a nice, rounded format.

As I bet you can tell, I’m focused on Cygnar at the moment, so I’m looking at what I want to do.  Painted models must be used, but they can be painted at any time.  Only models painted since Jan 1, 2013 count for painting points, though, so right now, only the Black 13th and Reinholdt count for me.

As tempting as it is to use them, I don’t have a great way to protect them in such a small army.  They really want a cloud to stay in, so Swamp Gobbers are a great 1 pt attachment for them, being able to drop a 5″ cloud to hide inside (and provide Stealth, since they all have Prowl).  Unfortunately, being a unit, I can’t use them and the Black 13th.  Gorman would work, though, but putting him and the Black 13th out there would just be far too juicy of a target.

So, I’m entertaining the idea of running a different unit, despite the fact I’ll have to paint it.  Before I get into that, though, let me discuss the warcaster I’ll be taking.  I’m 100% set on using Commander Coleman Stryker (stryker1).  He’s my favorite Cygnar warcaster, and brings a lot to the table.  Snipe, Blur and Arcane Shield are all great, his Earthquake provides an answer to many tough situations, and his feat lets me ignore the enemy’s attacks for one round, letting me be brash and bold with tactics.

Also, I have the alternate sculpt, which just looks fabulous.  It needs to be painted up, though.

Ok, back to unit choices.  UAs and WAs are allowed, so Stormblades come to mind, but at 15pts, 8 would be required to plop down the unit + UA, since they really, really need the Assault to function properly.  Plus, I’d like to give them Arcane Shield, some Stormgunners, and perhaps Tough from Rhupert, but…  Well, they just need too much support for this format.

Sword Knights, though, would be great.  I will undoubtedly have a jack or two, so their Flank [Faction Warjack] will get some use, and they’re cheap – 4 pts for six dudes.  They love reach ‘jacks because of Flank, and Stryker likes a Lancer for arcing Earthquake and shuffling buffs, so that’s a nice match.

Long Gunners would also work well.  I wouldn’t have considered them, but I recently watched a Battle Report that had them in a 25 pt army, and they filled a nice role.  They’re considerably more expensive, at a point a piece, but with Snipe, they could easily out-range anything on the board.  They can take out the enemy tar pit, or CRA into harder targets.  Coupling a few ranged focused ‘jacks and solo with them could be a very nice start to a gunline.

Overall, I think the 15pt size of the army requires it to be specialized.  I have to pour everything into melee or ranged – I can’t afford to try and be balanced.   So, I need an all melee or all ranged army.  Luckily, Stryker can play both those games.

This list has two ‘jacks with reach, and loads of armor.  The Centurion is ARM 21 with it’s shield, and a whopping 29 under Arcane Shield and Stryker’s feat.  The six Sword Knights shouldn’t have trouble finding targets that let them utilize their Flank ability.  Strangeways’ Power Booster won’t really be necessary, but his spray attack, Evasive ability and Repair skill will all be very useful in keeping the ‘jacks alive long enough to close the distance.

Still two ‘jacks for reach, but four more Sword Knights this time.  The Firefly helps the Stormsmith solo drop lines, and offers some added anti-infantry with Electro-Leap on the gun.  While more interesting, I feel this list is really only string against Warmachine, since the Disruption effects are lost on Hordes models. 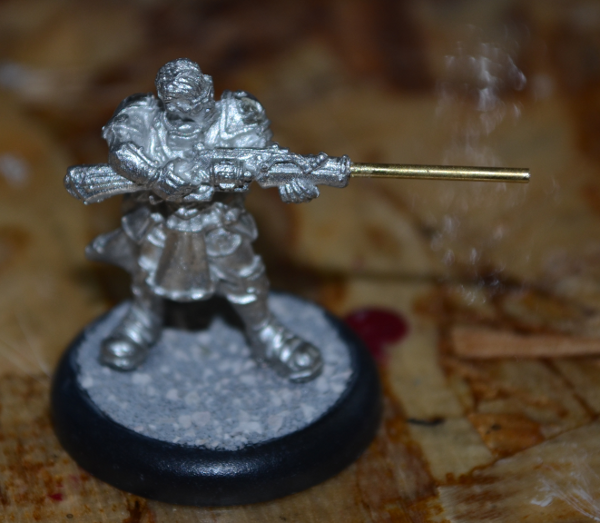 This list forms a decent start to a gunline.  The Sentinel protects Stryker from enemy shots, and can cut loose up to 6 shots of its own.  The Long Gunners can aide in taking out infantry with solo or 2-man CRAs, or assist the Defender in taking out harder targets.  The Squire helps Stryker manage his upkeeps and feed focus to the ‘jacks, lets him spread out more with 2″ added to his Control Area, and lets him re-roll missed spell attacks when he lets lose with that occassional Earthquake.  The only problem is that there’s nothing to help defend the Long Gunners, so they’ll be dependent on terrain for cover / concealment, since they can’t benefit from Snipe and Blur / Arcane Shield.

This list doesn’t stand a chance against a heavily tanked force, but it has enough vectors that if I can land an Earthquake, it would be game over.

I could also do something completely different: