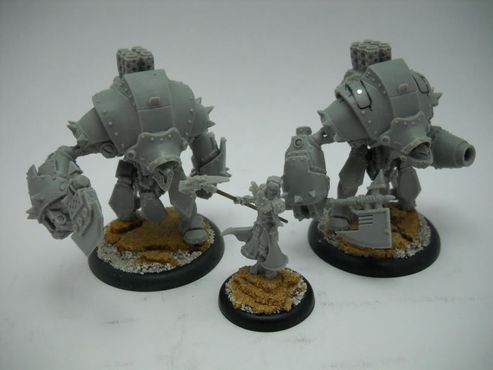 The magnetization went well, I like how everything turned out.  Sorscha’s weapon was a bit bent, and instead of trying to mess with bending it, I just did a pole swap.  Some brass rod, and I’m all set!  I need a cap for the bottom end of the stick, but I’ll figure that out later.  Here’s a battlegroup shot:

Not a huge change to anyone’s pose, and the conversions are minor.

When I did the pole swap on Sorscha’s weapon, I left more space between the head and her hand – In my opinion, she’s choking up on the weapon too much.  Not anymore!  It was a pain in the butt, but I was able to re-use the embellishments from the original.  The two discs – those are from the original.

She’s also on three layers of cork to elevate her just a bit.  The ‘jacks are just enormous compared to her, and really, she’s the most important thing on the battlefield – She shouldn’t be dwarfed by the ‘jacks.  Or at least… not too much…

I was able to put a bit of an angle on the Destroyer’s head by putting the magnet off-center.  A simple thing, but it adds more life to the model, which is the point of the conversions.  Also, I drilled out the Bombard barrel.  Not too deep, but enough to give the proper effect.  Drilled barrels add realism and always look good (so long as you get them centered…).

The Juggernaut saw a similar procedure on his feet but with the other foot this time.  A lively pose is good, and two lively poses are better.  Two identical poses are bad.  Plus, the weapon I want to put emphasis on is different for the two ‘jacks.  The Destroyer is primarily a ranged ‘jack, whereas the Juggernaut is pure melee brutality.

You can see where I put alignment marks on my pieces.  I used sticky tac

to play with poses before I settled on what I wanted, then just used a sharpie to put marks on the torso and shoulder, or on the hand and arm.

You’ll notice the hand and arm markings don’t line up.  I changed my mind.  It happens  🙂

Since I was able to get them for free from some generous people, I also have the arms for the Decimator.  They were magnetized also, and look pretty good on the ‘ranged’ torso.  I don’t have a Decimator head, so I just left the Destroyer head on.  It works.

Does the Decimator gun look odd?  It shouldn’t.  It should look correct.  The original gun’s sculpt puts the barrel and shell cylinder out of alignment.  If you look closely, the barrel doesn’t line up with where the shells would be in the revolving cylinder.  Oops!  Using my jeweler’s saw, I sliced off the barrel and the extra thingie attached to it and flipped them 180 degrees.  The result?  Something much more resembling a classic revolver.  It’s not perfect, but it’s leaps and bounds better than the original.

Now.  I bet you;re wondering what the magnets and lines are on top of the ‘jack.  Maybe you’ve already figured it out…  It’s for Torch!

Two magnets keeps them in proper alignment.  I used the same magnets I use for the heads – they were small enough to fit, and with two per smoke launcher, they have enough strength to hold.  Again, I magnetized the head off-center to give his head some life.

And that’s my Khador Battlebox.  My Sorscha didn’t come with a backpack, so that’s already on it’s way.  I’ll work on assembling the Skorne Warpack in the mean time.  Once I have both boxes assembled, I’ll be able to put my construction tools away and keep my work area neat.  Which will keep my wife happy.  Win.