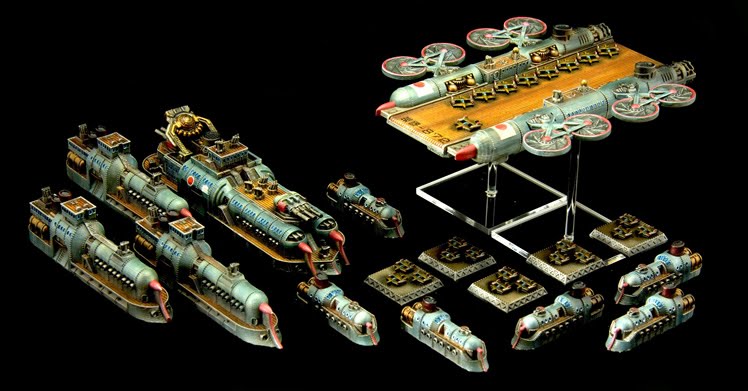 Wow.  I had a blast.  I came home exhausted, happy and with more stuff than when I left, so I’ll call it a success.

Iron Arena was a lot of fun.  There were 11 scenario tables you could play on, along with whatever from the 36 regular tables weren’t being used for tournament play.

In Iron Arena, each game you played earned you points – 1 for a new opponent from a different state, 1 extra for large games, 1 for playing a scenario table, etc.  Most games got me 3-4 points and I have to admit I got a little bit of help from Fragrr.  I played a 4-way game on a scenario table I had played on before, and I got 5 points while my opponents got 7.  You could rack up points fairly easily, but could only report a game once every hour to avoid cheating the system.

You could ‘buy’ prizes with your points.  5 points got you a pair of Templecon dice.  For 10, you could get a PP bandana or a small felt PP dice bag.  At 20 they had posters and token sets, for 40 you could snag actual models, an out of print NQ #1 or a copy of Scrappers, and at 80, they had a professionally painted Protectorate Battle Box, and a few other cool things.  I got myself the dice bag and 4 pair of dice, 2 blue pair, and 2 green pair.

I won the black dice at Midnight Madness: Death Race by being the first to roll snake eyes in the last round.  The 10 dice just about fill the little felt dice bag which I forgot to put in the picture.

The other prize I won at Templecon was … immortalization.  Seriously.  The guys at D6 Generation were running demos of Spartan Games’ newest miniature naval game, Dystopian Wars.  I was able to walk into their last demo, which consisted of 8 players on a 6′ x 4′ table.  Each of us got half a starter box.  I chose to play the Empire of the Blazing Sun, or the Trainboats as I call them.

The demo was awesome!  The guys were energetic, funny and explained the game basics very well.  The objective of the demo was to capture some oil rigs.  The person with the most after an hour of playing, won.  The game ended in a tie between an FSA (Federated States of America, the South won the cival war, btw) and the Prussians (who have an awesome zeppelin aircraft carrier).  They each won a starter fleet, rulebook and card deck.

I lost the game horribly.  The first time I tried to take over an oil rig, 4 of my 6 jump pack assault guys got shot down, and the other 2 barely managed to kill the mechanic defending the oil rig before dying.  So, I totally failed to capture a single oil rig.  On top of that, the two guys next to me decided to gang up and I lost half my fleet!  It was fun making “Kerplunk!” sounds and wailing over the pretend captain of the ship they had just killed.  Near the end, I tried to give my free re-roll tokens (a demo mechanic to keep people playing fast) to the guy who had killed me so he could kill another player’s big battleship.

After handing out the prizes, I was voted by the entire table to get the sportsmanship award!  The D6G guys took my photo, and along with the best sports from the other 3 demos that day, will be turned into characters in the next rulebook for Dystopian wars.  I guess the D6G guys promote the game so much, Spartan Games loves them and is also putting them into the game!  How cool!  I’m pretty excited.

Ok, enough gloating about how awesome it is to lose, Let’s talk about last week’s poll and what’s coming up model wise in the near future!  For the record, here are the results:

However, I am falling more and more in love with Skorne.  The models are just awesome.  At first I was turned off by the whole ‘Hi, we torture baby elephants’ thing, but the models are just too awesome to let that get in my way.  I’ll just have a house rule that when a Skorne beast frenzies, even if it’s against the rules, it automatically targets the warcaster.  That’d be fluffy and fun!  Seriously though, just look at how awesome this 25 pt list looks:

I’m also very excited to play Khador again. They were my first faction, and I think I do better playing Warmachine than Hordes, so I’m all about the focus. While I won’t use the BB models all that often, they do scream for some re-posing, and the models are gorgeous. I also want to try out the new Instant Sculpt everyone’s talking about to put Khador Anvils all over the ‘jacks. I really want to do a militaristic (WWII or Cold War) Russian type scheme, inspired by propaganda. I’ll likely go red with big olive green 5-point stars, etc.

However, the models you all voted for was the Retribution. The idea I have for them I bounced around with a few folks at Templecon, and I got some advice and suggestions. Of course, now the project is three times as complicated as just a paint scheme, and will require converting every model, molding / casting and other interesting things. I still need to flesh out some details, and make some visual aids, but please be patient. Despite what Faultie says, it’ll be worth the wait.

So, what exactly is the plan?

The first thing is I have to finish moving into the new condo. We’re living with half our stuff in two places, and it’s just disruptive. The goal is to be 100% out of the old apartment by the end of this weekend. We’ll also have interwebs at the new place this Friday, so I’ll be able to actually update. (The unsecure wireless we’re piggybacking off is awful, I can’t upload a single photo…). Once the move is done and we’re settled, here’s what will happen:

Realistically, the Skorne and Khador battle boxes need to be built if I’m ever going to apply to be a press ganger. Retribution is not suggested for demos. In an ideal world, I could make you all happy and get what I need out of the models, but alas, I cannot. So, Khador jacks will be magnetized and based similarly to my Legion. Hail Omni’jacks! The Skorne BB will be a vehicle for at least two tutorials. One on just assembling the darn thing (cause it’s awful) and because of said horrible-to-put-together-ness, I plan to do some greenstuff walk-throughs or at least some pictures. I’ll do their bases in an orangy-tan dust scheme to pay homage to their desert origins. I may even put some tumbleweeds on the bases too. (I really will want to put chaps and cowboy hats on the models now…)

Of course, all the while the retribution conversions will be tested and tried. Molds will be made and parts sculpted. It will be exciting.

Now don’t get upset about the lack of retribution. Stay tuned. Exciting things are around the corner. And, if you look close enough, there’s a clue in this post about what the Retribution will be all about.