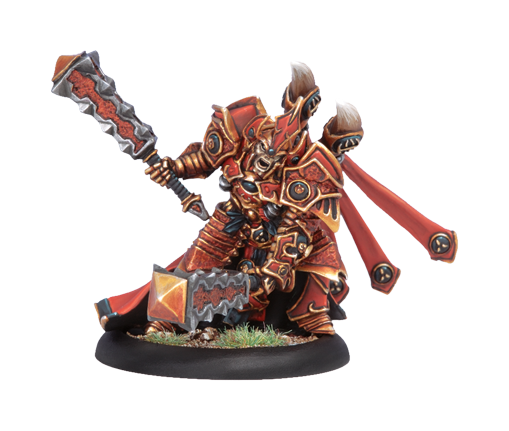 I’m taking enough models for Abyslonia T4 @ 35pts, Saeryn T3 @ 25 pts, and of course my several pLylyth lists.  I’ve also managed to pack my Cygnar models into my case, so I’ll have some (mostly) painted Cygnar too.

Since I’m late to the party, I haven’t registered for any events, so I’m just going to play Iron Arena (casual play) and hope for some freebies.  I’m hoping to get lots of games in, since I’m a horrid player.  I don’t keep track, but I’m certain my losses far exceed my wins.  Experience.  Practice.  And memorizing every stat on every model until my head explodes.  Huzzah!

On something completely unrelated…I recently acquired the Forces of Skorne book, and that means I have the Force book for each faction I own.  I’ve been perusing it, and the model I’ve come to love:  Tyrant Xerxis.

I mean seriously.  First it’s a medium based model, so he’s huge.  Second, look at those maces!  No wonder he has (*Action) Combo: Smite!

He’s a beatstick ‘caster, and that’s something I can wrap my head around.  He also does equally well for infantry and beasts, so he’s well rounded.

Lastly, he’s on the cover of the Forces book, so we get to see two pieces of art featuring him.  Awesome!

Don’t forget, if you haven’t voted in the “next project” poll, do so!  It’s up on top of the left-hand column.  Post your reason for voting the way you did in the comments below!