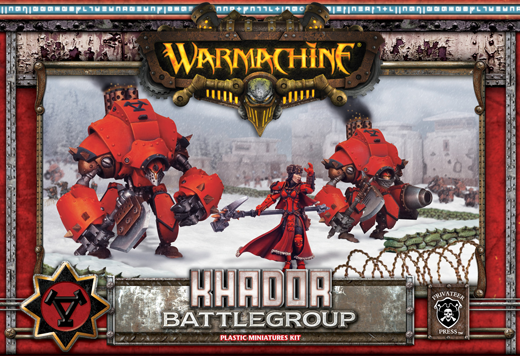 I need your help!

Thus far, I have free painting time until March 1st.  Jan will see the Farrow polished off, but what to work on for February?

I’d like to get another battle box painted.  I really want to have two battle boxes for each game, Warmachine and Hordes.

I have the Cygnar battle box just about done, so I’ll go ahead and say I’m going to finish that in February.  But what should be my main project?  I’m not going to do more Legion since I need my Legion unpainted for the Online Gamer’s Journal when it kicks back up in March.

I’ve been successful in my endeavor to reduce my number of factions.  I’m down to 5. That’s where I think I’ll stay until I get everything I already own painted up.

A breakdown of my options after the break…  (click Read More…)  (I’m trying to neaten up the main page with breaks.  Is it working?)

At this point, I have 3 possibilities:  Skorne, Khador and Retribution.

I can do the battle boxes (or equivalent in Ret’s case) for each.  All three would be fun, but they each mean a different type of work.

Skorne
Doing the Skorne battle box will mean the opportunity to do tutorials on assembling what’s considered the hardest battle box to assemble.  I’ve also already looked at the Titan Gladiator, and he needs some serious green stuff work, so there’s How-To potential there as well.  I like the studio scheme of deep, enameled red and gold.  It really fits the style of the models, in my opinion.  I am however, worried about writing two tutorials, doing all the necessary work and painting such detailed models in what’s going to boil down to about 3 weeks.

Khador
I have lots of lists I want to do for my Khador, but the battle box models aren’t really a part of those lists.  Still, I get to work with the awesome plastic models, and I’ll get to magnetize, and we all know how much I love that… I also really love the imperial red scheme, so I’ll be sticking with the studio feel for my Khador, and maybe even push the Russian theme a bit more with olive drab stars, etc.  Some research into WWII and Cold War Russian insignias would be necessary.  This also means freehand.  Fun!

Retribution
I have the battle box models, but Retribution as a faction isn’t really suggested for demos.  They’re trixy elvses.  Doing my retribution will involve reposes of all the ‘jacks.  I love the models, but as some people have found, dynamic poses make the ‘jacks amazing.  I’m thinking reposes for everyone!  I have an awesome idea for a scheme though, so, that should be fun.  Like Skorne, all the conversion work required could squeeze an already tight timetable.

So, I need your help! I’ve posted a poll on the sidebar and I need your vote!  Pick your favorite and then tell me why you chose what you did in the comments below. Convince me to paint the battle box you chose!  Have a fun idea for a paint scheme? Tell me about it!