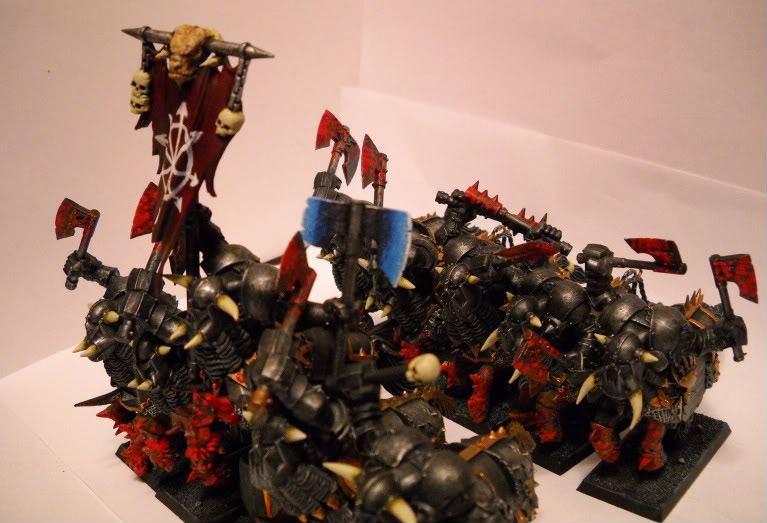 So, just to recap what happened for the last few months, I took horse parts from the Games Workshop Warriors of Chaos Knights and the majority of the Orcs & Goblins Black Orcs kits …

… and combined them into a rough centaur like creature…

The first issue was the overly obvious spot where a rider would go had this guy been a horse.  However, since riding a centaur is plain rude, a solution was needed!  Chaos dwarves are smart, and they are master blacksmiths, so they would have lots of armor covering the ribcage there.  So, a plate mail looking bit of armor was made from plasticard:

From there, the centaur needed to look more like a dwarf.  What do dwarves have?  Beards!  So a beard was sculpted from green stuff:

Now all he needed was some paint!  First, a black undercoat, courtesy Testor’s Flat Black.  Then, I lightly drybrushed the entire model with Boltgun Metal.  This gives the ‘blackmetal’ appearance that sets these dwarves apart from their non-chaos bretheren.

Several bits were picked out with a few layers of Dwarven Brass, and finally a Hashut symbol was freehand painted onto the large, open part of the plate mail.

Lastly, blood and gore were added to the weapon and fore legs to help portray that this unit is not afraid to be in the thick of the fighting!

This unit was to house the client’s Battle Standard Bearer / Hero character, so he got special treatment.  He stands atop a large rock carved from foam insulation from the Rockwool services online.

His arms were also magnetized so that he can be carrying any number of weapons banners, shields and ornaments of destruction.  One such bit of gear that was made specially for the Hero was, in fact, a shield.  It consisted of 3 layers of plasticard, and also has the Hashut symbol.

Here’s a WIP shot, showing the first two layers of plasticard which were required to make the Hashut symbol:

Then a border and rivets were added to polish the look.  These are Chaos Dwarf master blacksmiths after all!

The back of the shield also includes straps and rivets so that it can be properly worn:

Once the hero and paint test model were done, it only took two weeks to speed paint the entire unit!  Here’s the finished group:

The Hero’s banner got a free hand Chaos Star:

The Hero’s shield’s symbol got a neat glowing ember effect:

And lastly, the Hero’s base has lava on it!

Overall, I really enjoyed working on this project.  I hadn’t done much sculpting before this, and the beards really tested my skills and let me learn some techniques.  They were also a great excuse to purchase some sculpting tools!

I’m also very satisfied with how quickly I was able to paint the models.  I used to take weeks just to get 2-3 infantry done, so 10 cavalry sized models in 2 weeks is a new record for me!  I was able to use all the speed painting techniques I’d read about, as well as a few techniques I’d seen on a miniatures painting DVD I borrowed from a co-worker.

Now that I’ve had a chance to practice all the speed painting techniques, It’s probably time I write a quick article about them!  Look for that in the next few days!