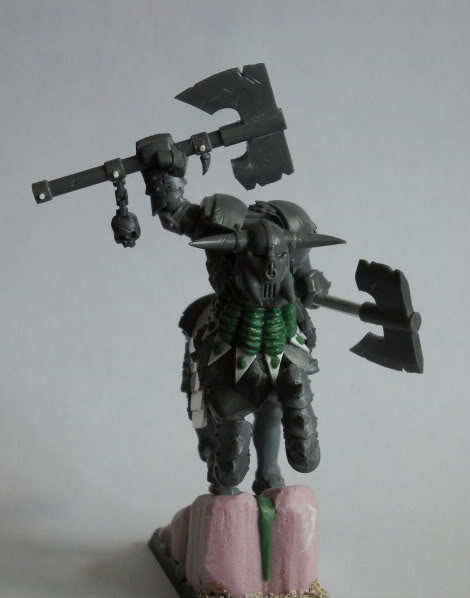 Ok, so the Hero’s build is complete, barring any last minute changes or things I may have forgotten.

First off, here’s the shield. It’s been washed in a black wash to help bring out the shape and show off the rivets. It was blindingly white and bland otherwise.

And another detail shot from the front, you can see about how thick the shield is, and the whole leather strap idea:

Now for all the combinations of weapons he can carry:

Another view of the GW / Shield combo. You can easily see the green stuffed gems on his beard spikes. Detail shots of those later.

A dual GW build. Not necessarily viable in the game, but looks badass, so why not?

You’ll notice the shaft of the weapon in his left hand is metal. The head came from the duplicate of the right arm, so I had to build a shaft for it as well as hollow out a right hand to hold the weapon. Note the brass ring at the end with rivets – The weapon couldn’t be an axe head on a stick, like it’s partner it needs a cap on the end. I also put new rivets on the stock weapon as well so the rivets would be uniform for both weapons.

Trading the right handed GW for the banner, we see him assume the role of the BSB.

Also, the left handed GW can be rotated 90 degrees for a different feel:

For a more defensive model, we can swap the GW for the shield:

Or, for a very combat oriented hero, ditch the banner for a Hand Weapon:

Another combo lies with the banner and other Hand Weapon:

Or, for a whirlwind of slaughter, dual Hand Weapons!

So, there’s quite a bit of options here. I think there’s a total of 7 combinations! But it’s not all about the load out, his base is what really signifies him as a leader. So, here’s some close ups of the lava and the rock. The little nicks in the GS will catch a red wash and give the effect of motion. The lava should look like it’s flowing.

Off the front, we have a little dribble of lava just starting to spill over the edge:

And the lava’s already begun to pool on this side of the rock:

But, he wouldn’t be a dwarf without his beard! The beard itself isn’t anything particularly special, it’s his beard spikes (TM) that really show he’s one step above the riff-raff:

So, there you have it, our hero!