It was just one of those days.  The idiot cartographer had led them to the wrong village and they’d mistakenly slaughtered loyal Khadorans.  Again.

*sigh*  Sometimes, you just can’t catch a break.  Unfortunately, the Butcher of Khardov cut the cartographer’s head off once the mistake was realized.

Yesterday was the last main game night for the slow grow league, and I was lucky enough to get to face Ron, a new player to tabletop games.  He’s done some fantastic modeling of Torch and Strakov, and has really taken the game by storm.  We were playing at 35points this week, and it was the first time at this point level for both of us – his first 35pt game ever, and my first 35pt game fully painted and Teir 4.

Round 1! Hark! Who goes there? 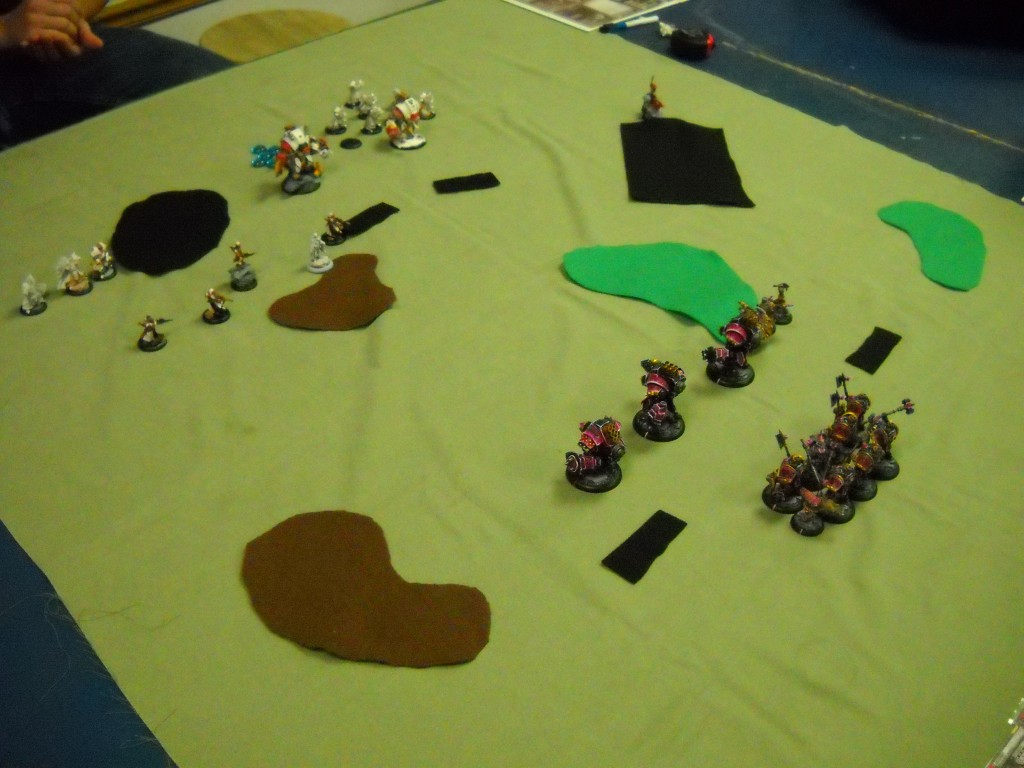 Going into the match, I was hoping to divide and conquer as you can see from my placement. I was trying to think of a way to neutralize Brendon’s ‘jacks while taking minimal damage/loses. I knew I could count on Torch and his Ripsaw to take out at least one and from what I’ve read about the Great Bears, they could too. The Manhunters were also a priority target in the beginning because I didn’t want one sneaking off and coming back to bite me in the ass later in the game.

Butcher’s Theme is fantastic. My Shocktroopers were a point cheaper, my ‘jacks got AD, I could re-deploy solos and the Man-O-Wars got +2 SPD the first turn. It turns a very slow army into a quick one. Ron was running Strakov, so I knew he’d have the maneuverability advantage, thus I made him go first. That nullified my ability to re-deploy solos, since my AD solos would be the last to deploy, but it let me choose the matchups, and forced him to react to me.

The Shocktroopers would be nothing but a screen all game, so Butcher just parks behind them with the dog. Since the ‘jacks got AD, I just put ’em out there. I wanted the Kodiak to go after the Widowmakers, hoping the Vent Steam would just wipe them off the board. I then matched up a juggernaut to each of his other ‘jacks. The Manhunters and Demo Corp I matched up to the IFP and Eiryss. Eiryss needed to die ASAP, and I had no issue sacrificing a manhunter or two to do it.

Ron mentioned that this was his first game at 35 points, and this was the first time for me using this list, so neither of us were 100% sure what was going to happen.

Round 2! The Thunder Rolls…

I held back a bit this round and waited for Brendon to trudge up the field to me. I was hoping he would cluster up and I could use AOEs to begin to soften him up. With the Great Bears I guessed incorrectly that they would all be able to reach the Kodiak on the charge, taking it out of the game early. As you’ll see, that mistake cost me. 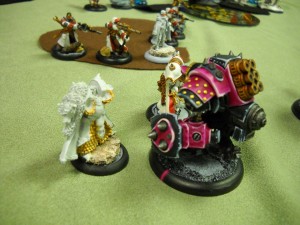 Whew, those Great Bears coming up a tad short really saved the Kodiak. His return Vent Steam attack wasn’t spectacular, but it did enough. Yuri finally saw some action which was awesome, but He was left in a really bad position. I was pretty happy that Eiryss retreated – that meant she was plenty far away from my ‘jacks and Butcher. Other than that, Round 2 was almost the same as Round 1 – everything runs. Again.

Round 3! Feat vs Feat 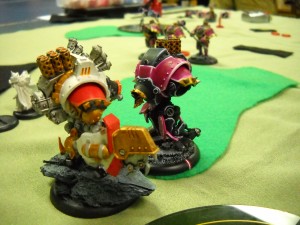 I continued to use the Widowmakers to whittle down the life of the warjacks. Without any infantry in Brendon’s list, I couldn’t really take advantage of Swift Hunter, so they were kind of stuck. The Kodiak’s Vent Steam really did a number on my Great Bears and I was hoping they would pay it back, but alas, the dice had other intentions. I felt like if I didn’t pop my feat this round, I was going to be in trouble. Butcher still had his feat and if he popped it, it could take a good chunk out of my force. My only chance was to try and take out as many of his guys first to lessen the effect. The outcome was…less than ideal for me. 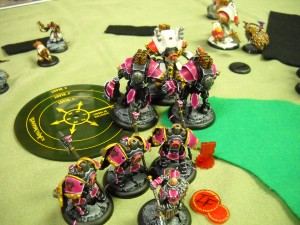 Man, the widowmakers can put out the hurting on a ‘jack. Most people write off the single point, but when you add in a marksman for a 5th point, and Sentry for one more (out of turn), they’re cutting a column off each turn. I was not expecting that.

I started this turn and realized I had no cortexes, and the two remaining ‘jacks each were missing an arm system. If I wanted them to do anything at all, they needed help. Most of my stuff was in bad positions or half dead, so I absolutely had to get one more good turn out of them before they died.

Luckily, Butcher has loads of battlegroup abilities, and Full Throttle + Feat effectively gave my ‘jacks free charges and boosted initial attacks. I would have liked to keep my feat for the Butcher murderation turn, but the ‘jacks were too important to let Ron just whittle them down again.

Luckliy for me, Butcher’s feat is an aura, so Yuri was able to take a step back into Butcher’s control and gain the 4th die on damage. That combined with thresher on MAT 8 meant lots of dead IFP. Sweeeeet. 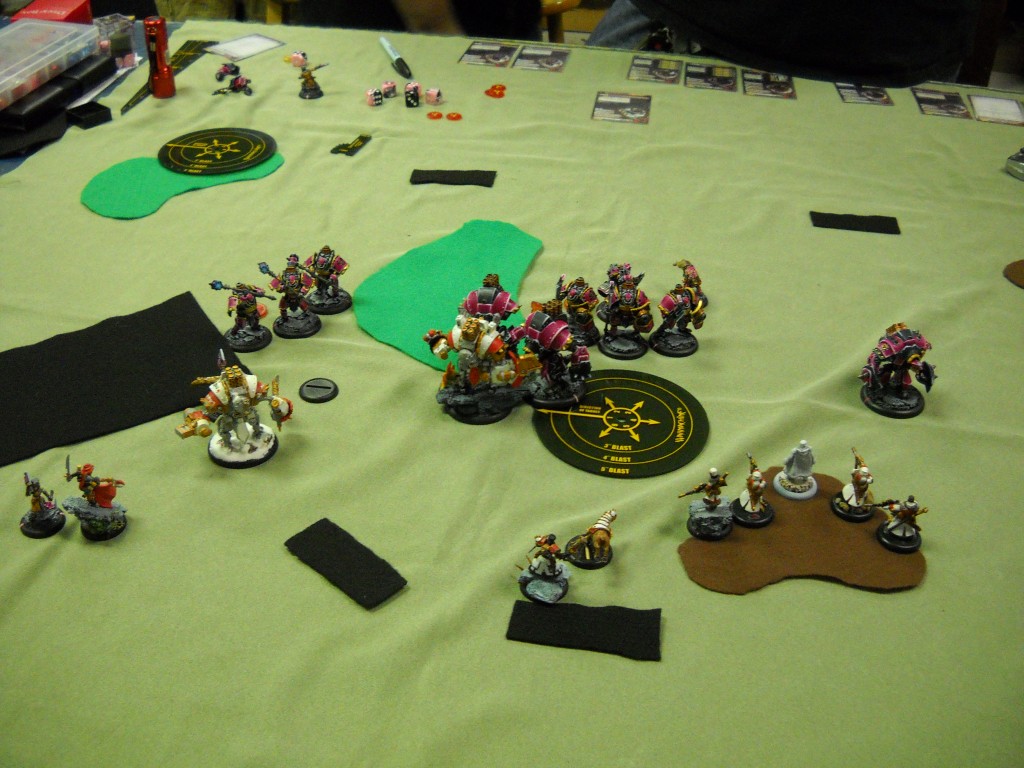 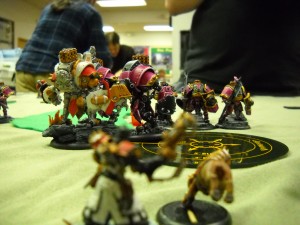 What I was worried about came to pass, but it wasn’t as bad as it could have been thankfully. My IFP were slaughtered and reduced greatly, so they became almost a non-factor. I still had some plans I thought could work, but my dice had other ideas this round. I think I could have really evened the odds a bit if I had rolled better. Torch’s activation and subsequent limp-wristed attacks really hurt me. Oh, and if you are wondering why I cast Rift, it’s because the AOE would have tagged the Juggernaut and the 3 Shocktroopers. I don’t think it would have killed them, but it would then be rough terrain, slowing down their next advance. One glaring mistake I did make here was casting spells instead of giving the focus to my ‘jacks. 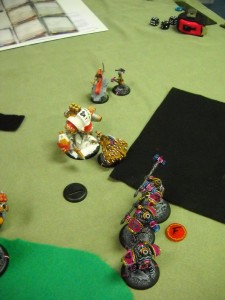 This list is fairly blunt. There’s not a ton of strategy involved, and I think I was a bit too lax in my planning this turn because of that. I really should have moved the Juggernaut around Torch’s corpse before moving the shocktroopers up, but I didn’t and boxed it in next to the wreck marker’s rough terrain. If I’d been able to walk around the wreck, it would have been in a better position to threaten Strakov and the dog next turn. I knew it couldn’t charge, but it could certainly look scary…

Also, Fury on Demo Corp is disgusting, and must happen again. 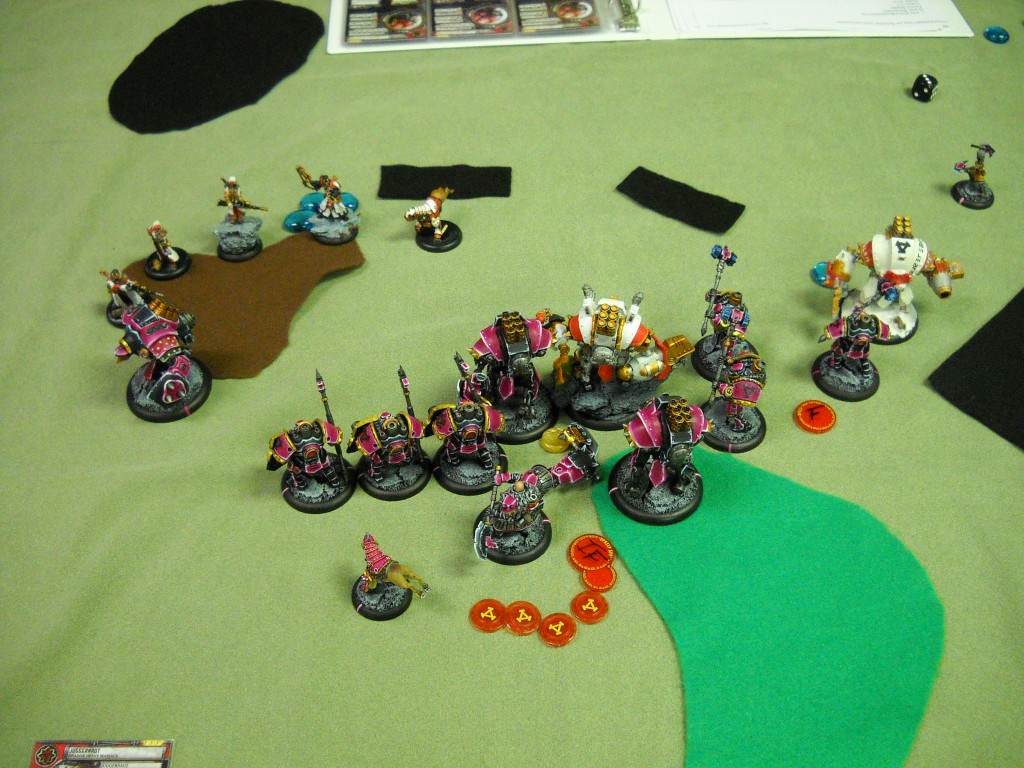 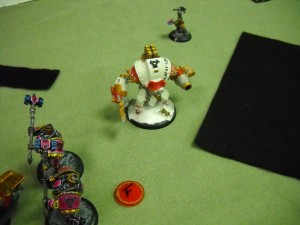 Things are starting to look bad as I have lost a lot of my heavy hitters while Brendon still has plenty. This has become an attrition game for me. A lop-sided one, but I’ll won’t go down without a fight!! 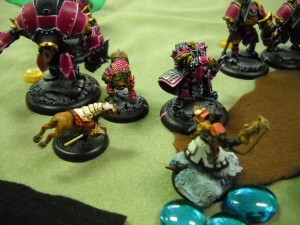 WTF. Widowmakers, the dog and Strakov team up on the Kodiak? Talk about death by a thousand cuts, sheesh.

I really messed up here. I should have had my dog charge Ron’s dog. It has tough, so it may not have died, but at least I could have dropped his DEF by 2. I also should have dropped Fury off the Demo Corp for the 6th focus point. Needing 8 to hit meant I really needed to boost to make sure the hits connected. Butcher just could’t land a solid hit on the slippery little $#!). That left Butcher out in the open with no focus and no Iron Flesh, which was less than ideal. 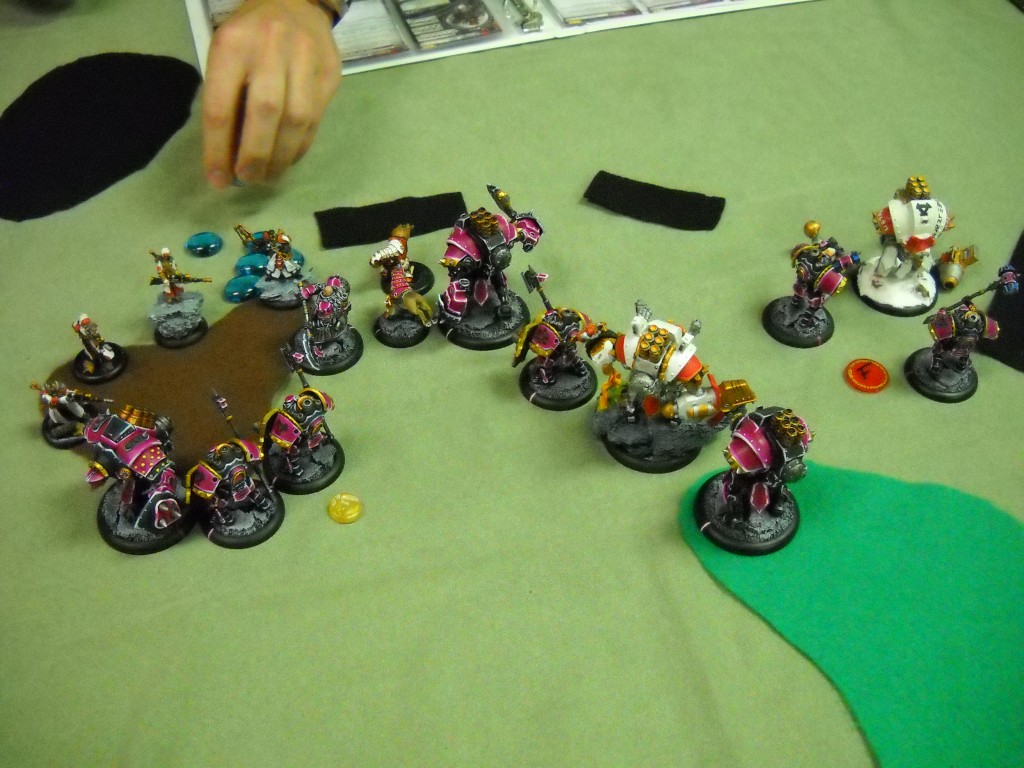 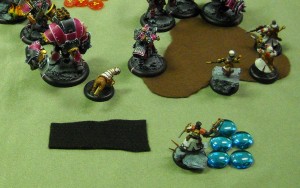 Arrrgh! Why didn’t I move Strakhov back more?! I had a plan and it was to move out of Butcher’s charge range and hope to last one more round to charge him and buy attacks until hopefully he cracked. But I stupidly confused myself (or collapsed under pressure) and didn’t make the right move.

Don’t try to run from the Butcher. You just die tired. Unless you’re Ron’s War Dog, who made 4(?) tough checks. 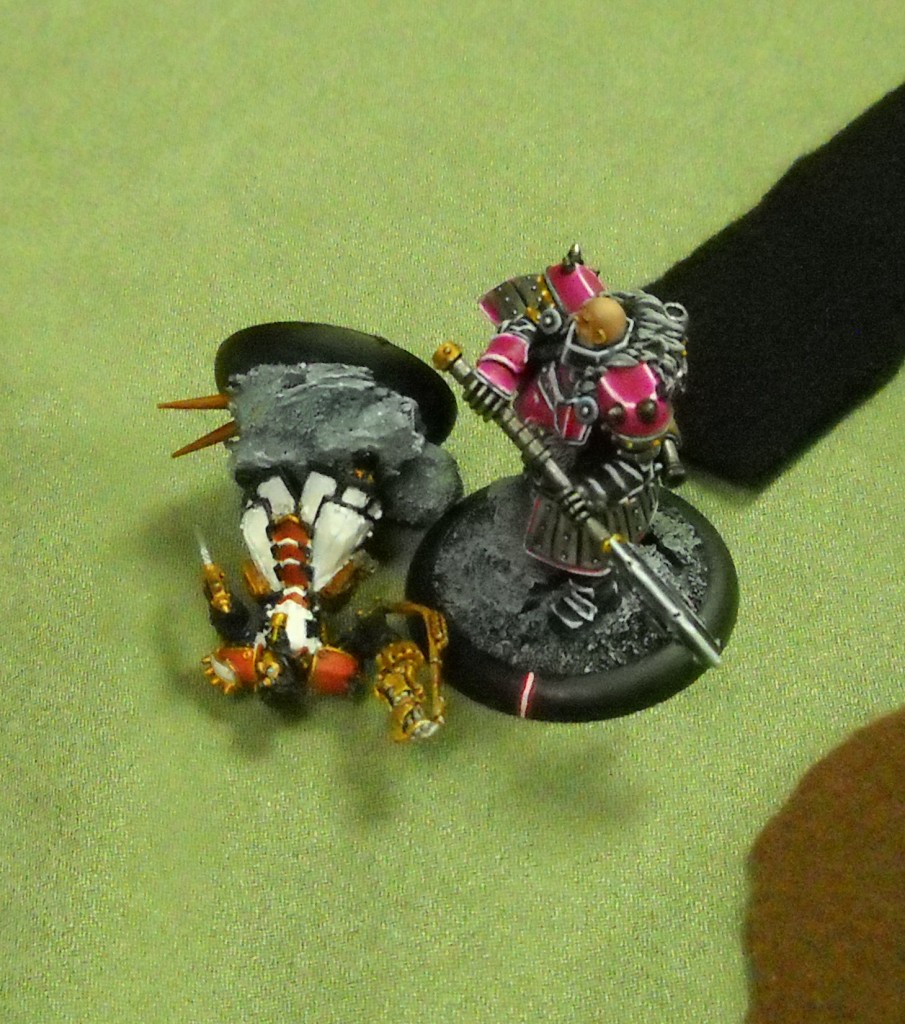 I picked my army with the idea of having a large “toolbox” from which to work with, so that I would have options when I faced the various factions we have in our store. I did not expect to face this mountain of armor Brendon brought. I knew I was going to have an uphill climb from the beginning, but I was hoping to play a little defensively and bait him into a bad position. I really hoped Butcher would pop himself into the open somehow, probably by getting overzealous with Lola.

I am still learning to use the Great Bears and the Widowmakers effectively. Last I used the Great Bears, I was really defensive with them because I didn’t want to lose them. This time I played them a little more recklessly. I think in this game however, the Widowmakers more than paid their dues, so I would have them share my MVP honors with…drum roll…the Wardog. Yup, that dog got in there, mixed it up, and would not go down.

I still made some mistakes (like forgetting about the IFP’s mini-feat) and such, but that can be expected at my low level of skill and with this being my first 35-point game. I feel like I am starting to get the hang of playing Strakhov overall and it’s only a matter of time until things “click” for me.

The more I play this army, the more I’m certain that it’s all about putting the opponent in a bad position with no good choices. Most people consider any Butcher list so be a delivery system for the man himself, but Butcher’s Full Throttle spell is fantastic with 3 ‘jacks. I used it when I only had two, but it got around the lack of cortexes, and when combined with the feat, effectively nullified crippled systems. Sure, it cost me my feat, but it bought me another round of attacks from the ‘jacks as if they had no damage on them.

I was not expecting the Widowmakers to be as potent as they were. I did not remember that they could pick the column for damage, so I just figured they’d pepper the hull boxes and then die a steamy death. Boy was I wrong. Entire columns, just gone. That was… enlightening.

Overall, a fantastic game, and I look forward to the next encounter with Ron.