Last week, I played a game against local player Mark, who you may or may not remember from one of my first battle reports.  He plays Cryx, and he plays dirty.  Games with him are never boring, and are always bloody.

I was trying out my 35pt Hexeris T3 list, and Mark concocted a list on the spot with only the knowledge that I was playing Skorne.  As I build the lists on Forward Kommander, I think Mark was one point over, but I don’t think it had an effect, nor do I think 1 extra point at 35 would be a game changer.

Here are the lists:

Along with trying out this Hexeris List, this was also the first game with my new terrain.  I traded some models with Carl, a local guy who enjoys making terrain and helping out new players.  He’s a fantastic guy, and this terrain he made is much more awesome than the felt cutouts I had been using.

Mark won the roll-off, and chose to go first, effectively negating one of my tier bonuses, Advance Deploy Swordsmen.

Another of my Tier bonuses was Upkeeps in play first turn.  I had Soul Slave on my Razorwurm (turning it into an Arcnode).  I put Death March (+2 MAT and Vengeance), on the unit of Swordsmen without the UA, my sacrificial lambs.  Lastly, Hexy had Psychic Vampire up and running.

Venethrax put Soul Harvester on the Blood Gorgers, so anything they kill would feed souls to Venethrax.  Helldivers advanced and burrowed, and everything else ran. 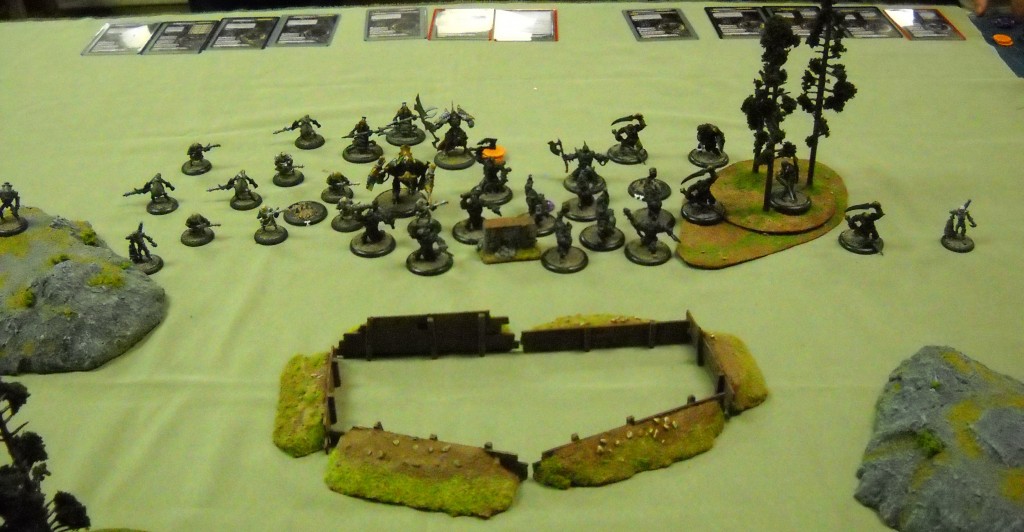 On my first, I went for the sucker punch.  Hex upkept his three spells, and the Swordsmen and guardians ran.  Hexy charged the Ancestral Guardian, in order to get up field further without sacrificing everything to run.  I caught the first handful of Blood Gorgers in Hexy’s control area. 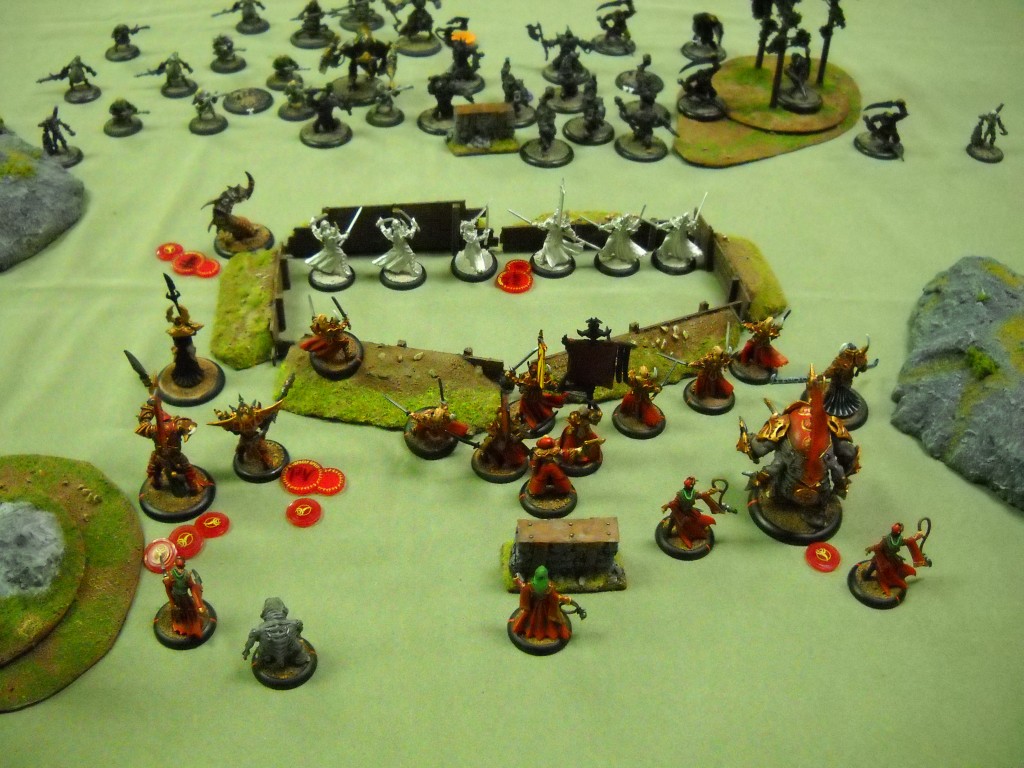 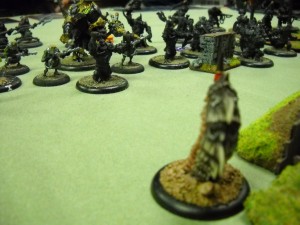 Tough is a huge rock to Hexy’s feat’s scissors.  I should have waited to catch more of his models the following turn, but I had read up on this first turn blitz strategy and wanted to try it.  I think it has merit, but I don’t think this was a good army to use it against.

Mark advanced the Blood Gorgers into combat, being unable to charge over the linear obstacles.  The killed all but one of the Death Marched Swordsmen.  The Bile Thralls advanced, and a few were in range to spray the Wazorwurm, knocking about half it’s life off.

Venethrax put up Lamentation, and then advanced far enough to catch Hexy in his control area.  The Black Ogrun advanced and shot at Hakaar, but missed.  The Necrotechs advanced behind the bulk of the army, and the Scrap Thralls ran along the flanks, one of them engaging the Razorwurm, nullifying the Arcnode. 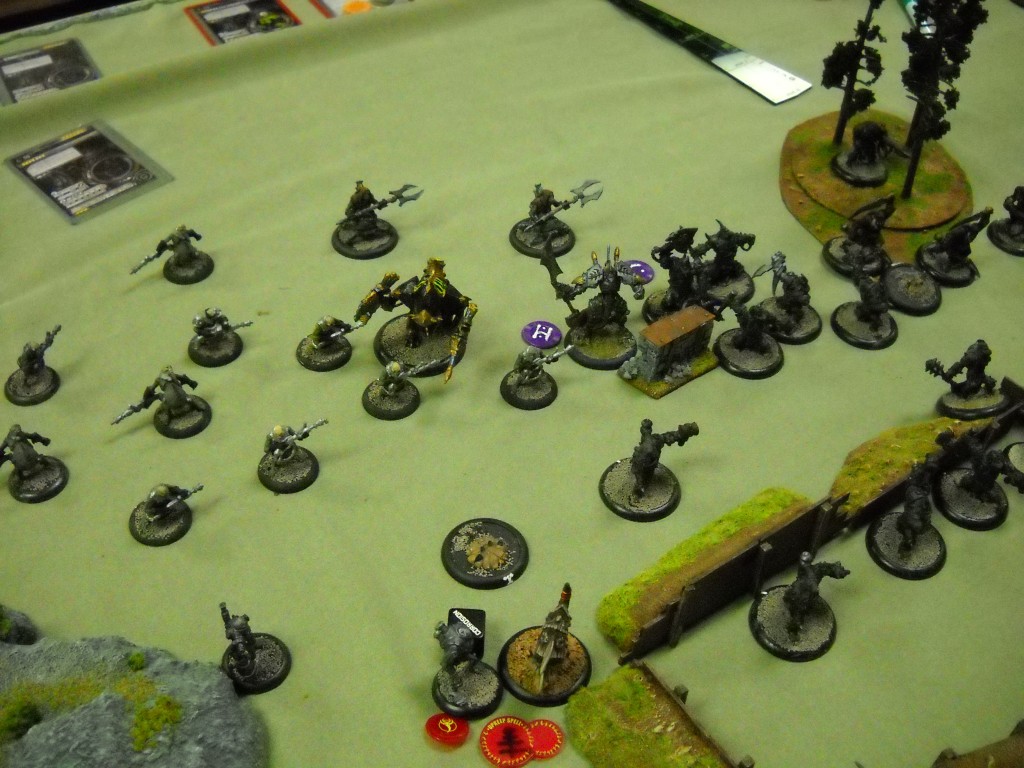 The lone Swordsman Vengeance moves and kills a Blood Gorger.  Hah!  Corrution doesn’t go out on the Razorwurm, due to Venethrax’s Caustic Presence, takes out last box on its body.  Hexy is one fury short (because I didn’t leave myself enough on the board) and, only upkeeps Psychic Vampire, and has to pay 2 Fury to do it due to Lamentation.

The unit of Swordsen with UA pop their mini-feat, which causes them to automatically do a single damage point.  They eat several Blood Gorgers, paying them back for the other Swordsmen. 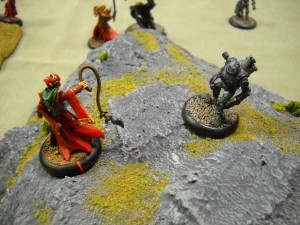 One of the Beat Handlers charges a Scrap Thrall, killing it.  What a hero!

The Ancestral Guardian (who is on his last leg due to Hexeris’ Turn 1 charge) frees up Razorwurm by charging the Scrap Thrall engaging it.  The Razorwurm then attacks a Blood Gorger, boosting damage to get 2 dice, and drags it under.

Marketh circumvents Lamentation and puts Death March on Swordsmen with UA, knowing they’re going to get hit with the remaining Blood Gorgers.  Hexy puts 3 Fury on the Agonizer, rather than pay double to cast something.  The Agonizer and Hakaar then advance up field. 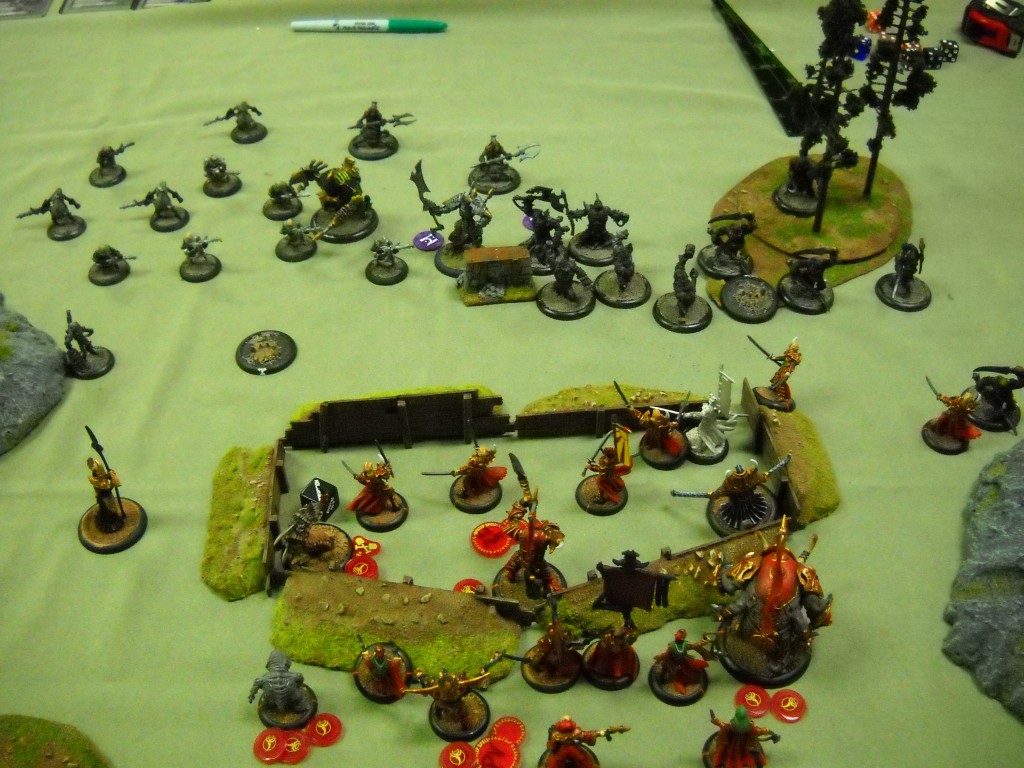 Venethrax has 12 Focus this turn, due to all the kills the Soul Harvesting Blood Gorgers.  He upkeeps his spells, and passes out most of his focus to his ‘jacks, avoiding Psychic Vampire.  A Scrap Thrall charges, and then takes out the last two points of health on the Ancestral Guardian. 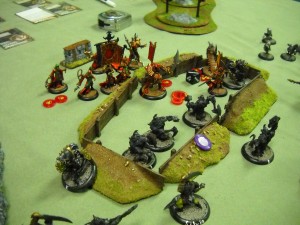 Blood Gorgers walk forward, attack the Swordsmen and kill 3 of them.  Corrupter shoots a Burster shot at the Agonizer, killing it and a nearby Beast Handler.  A Helldiver attacks Hakaar, deals 6 damage, and misses the last 2 attacks.

The other Helldiver attacks the Razorwurm, misses first attack, misses second attack, and then misses the third attack.  The rolls were snakeyes, then 1,1,2,  then the roll was low by 1.  Lucky me!

Gerlak kills some swordsman, then kills Hakaar, then kills another Swordsman, with nothing nearby to continue the whirlwind of death.  A Scrap Thrall engages the heroic Beast Handler, and the Black Ogrun party advances.  They then performed a Combined Ranged Attack on the Gladiator, dealing 7 damage and pulling it way off course.  The melee followup attack deals another 6 damage.

At this point, we were getting close on time, the store was due to close in about half an hour.  I saw an opening, and took it.

The Swordsmen’s Vengeance allows for it to move out of the way, and it attacks the Helldiver, doing not much.  Marketh’s Soul Tap gets around Lamentation, and lets Hexy upkeep Psychic Vampire and Death March.

The Swordsmen activate, again shuffling out of the way, and put some more damage on the Helldiver with a combo strike, as well as killing off a Blood Gorger. 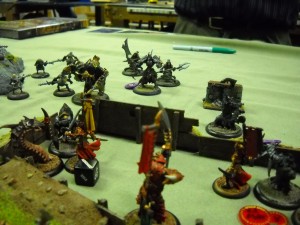 Hexy backs out of Venethrax’s control area, and casts Rush (+2 SPD and Pathfinder) onto the Cyclops Savage.  The Beast Handlers enrage the Savage, and shuffle around a bit.

The Cyclops charges Venethrax, and after moving but before attacking, casts its animus on itself (which I realize now was entirely redundant – it’s a latent ability.)  It needs a 9 to hit Venethrax, and ends up having to boost.  The auto-boosted charge attack deals 12 damage to Venethrax.  The Cyclops takes a second swing, and misses.  If I;d not made the mistake with the animus, it could have boosted the second attack, and possibly ended the game. 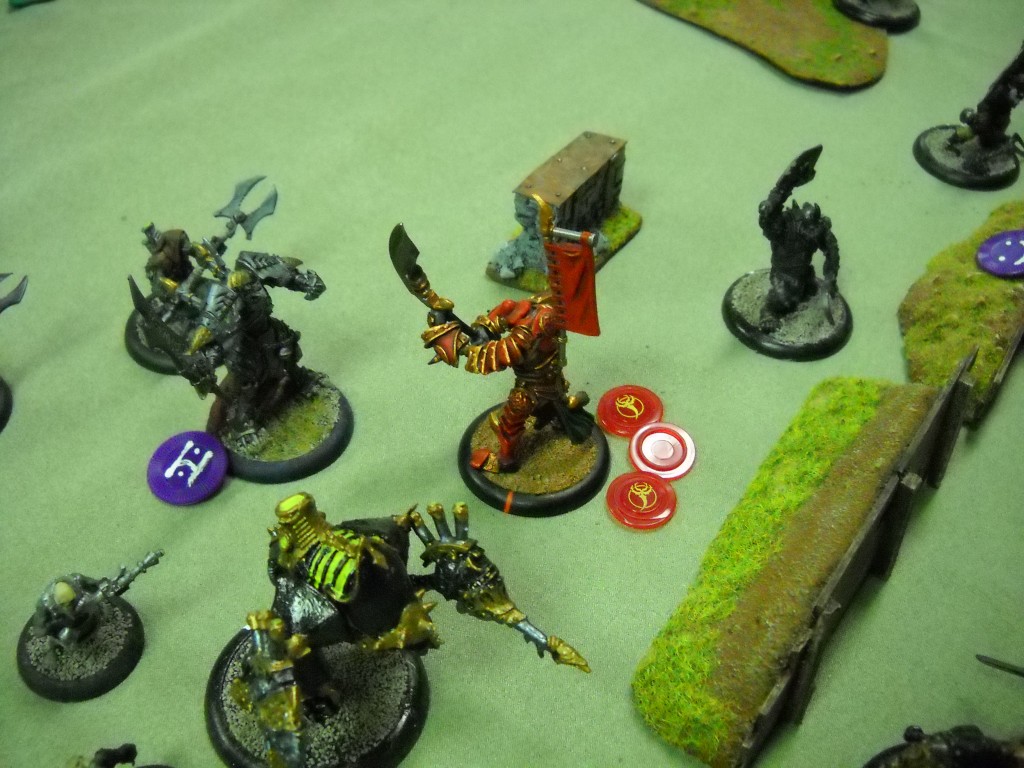 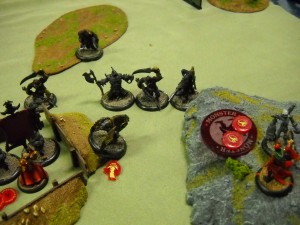 The Gladiator, surrounded by Black Ogrun, throws the nearest one into a Helldiver, killing the Ogrun and dealing significant damage to the Helldiver also.

I ended up forgetting to activate the Razorwurm, his brown paint scheme blending into the dirty linear Obstacles. 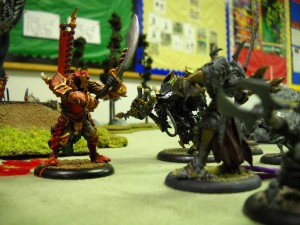 Venethrax has 10 Focus this turn, and rips into the Cyclops Savage.  In one hit, he deals 19 damage, which is sufficient to end the beast’s life.  What’s worse, is all three Fury on it immediately get added to Venethrax’s Focus.  he then heals himself for 6 of the 12 damage he received from the Savage, adding insult to injury.

The Blood Gorgers attack the remaining Swordsmen, killing the UA, leaving a lone Praetorian, who valiantly passes his command check.

A Scrap Thrall Charges the Gldiator, dealing 5 damage, and the explosion’s blast kills the Hero Beast Handler.  The Black Ogrun CRA the now unengaged Gladiator, but fail to wound with snakeyes. Had they been successful, the Gladiator would have been drug out of Hexy’s control area, leaving him short on FURY the following round.  Dirty Cryx! 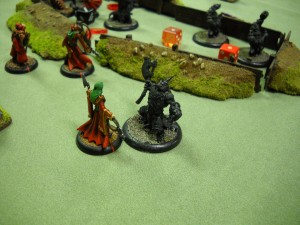 A Helldiver engages the Gladiator, and Gerlak charges a nearby Beast Handler.  He kills it,  then kills the next one in line, then kills Marketh and finally engages Hexeris.  Gerlak’s first attack hits, deals 8 damage which Hexeris takes.

The remaining Helldiver attacks the Razorwurm, killing it.  The Bile Thralls advance, and two are in range to spray Hexeris.  The need 12s to hit, and both miss.

The Corruptor attacks the last remaining Praetorian, using a Distillation shot.  It hits and kills the swordsman, healing Venethrax for a further 2 health, leaving him at nearly full. 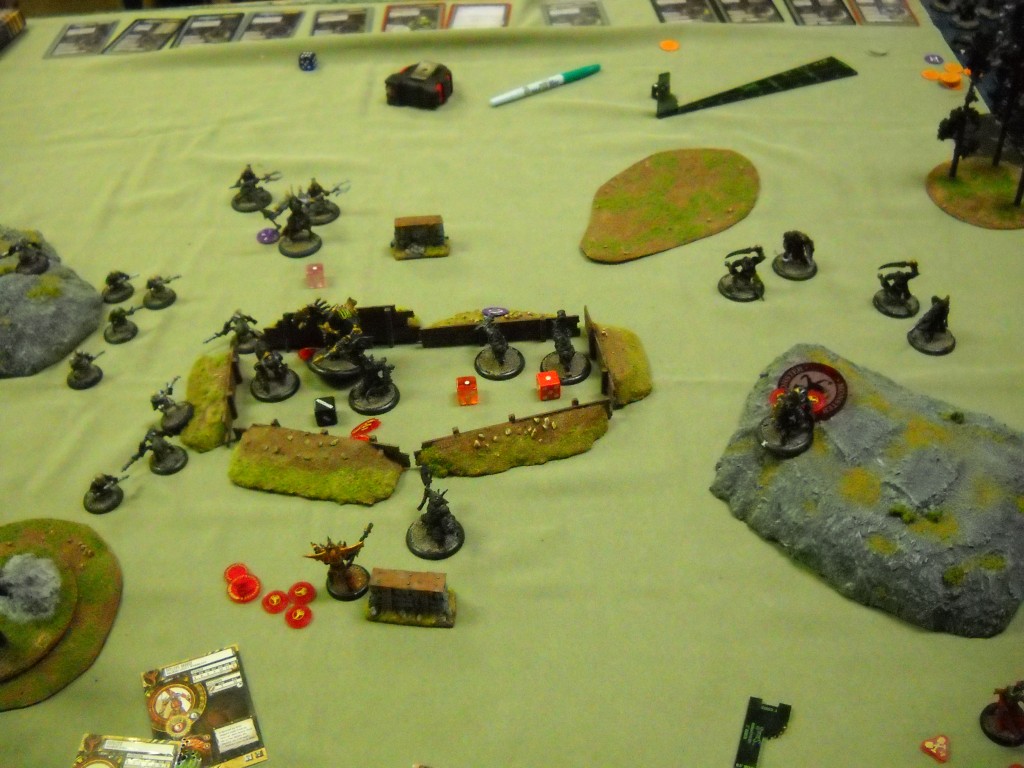 With the store closing time imminent and two models left to tackle the oncoming avalance of undead, Hexeris conceeds.

Feating turn 1 was not a good idea.  Tough is a fantastic counter to the feat, since the feat is entirely driven on deaths.  I needed to wait, and catch the majority of the enemy army in Hexy’s control area, in order to make maximum use of the feat.  I also could have used the swordsmen auto-point as a great feat chain starter.

Having the Cyclops cast its animus on itself was a rookie mistake.  Had that not happened, it would have had another FURY to use, and would probably have hit and dealt some damage.  Ideally, the Gladiator would have made the assassination run, but the Black Ogrun completely side tracked it.

All in all, Mark’s list was a good counter to mine (Soul Harvester completely robbed Marketh and the Guardians out of souls, which hurt), and while I got completely dominated, I saw just about everything this list can’t handle well.  Hopefully, I got all my learning done early, and I’ll fare better during my next game.

What would you have done differently?

What would you like to see in future battle reports?