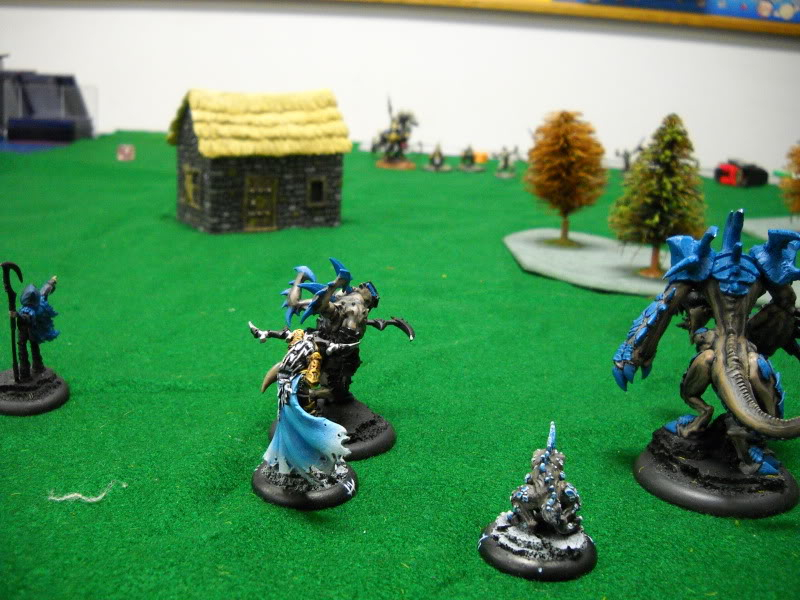 Part of the Online Gamer’s Journal is playing games with our armies!  Of course, what’s the point in participating in a journal that requires games if you don’t write them down?  Here’s the game I played against local player Mark last Thursday:

His list was constructed without knowledge of mine, yet it ended up being the perfect counter to everything I had available to me. You’ll see. I won the roll off and made him set up first.

All the ‘jacks ran forward, as did the Cephalyx tarpit, Necrotech and Scrap Thrall. eGaspy cast Hellbound on himself (cannot be targeted by charges, within 5″ counts as rough terrain for enemies), walks forward to hide behind his wall of goons.

Everything ran forward except the Shredder, who turned out to be just a bit short to be able to put Tenacity up on Lylyth.

Shredder moves first, casts Tenacity on Lylyth (+1 DEF / +1 ARM). Spell Martyr runs ahead, and Lylyth casts Eruption of Spines through it into the Drudges. It hits 6 targets (5 + original target), only kills two Drudges (damn tough rolls), and deals 2 damage to a Deathripper.

The Carnivean takes a few steps and sprays the Scrap Thrall who was sneaking around my flank. Lastly the Bolt Thrower whiffs a boosted shot at one of the Deathrippers.

Shepherd makes a tactical withdrawal. Lylyth tags the Deathripper closest to the Drudges doing no damage. She then casts Spiny Growth on the Shredder and bushwacks behind the building to safety. Shredder casts Tenacity on Lylyth, goes Rabid and gets a free charge on the tagged Deathripper, missing with it’s one attack. The Carnivean runs to get back to the group and casts Spiny Growth on itself.

eGaspy upkeeps Hellbound and again gives 3 focus to each Deathripper. The first one hits and reduces the Shredde to 2 health. With sustained attack, it just chews harder and kills the little beastie. It takes a total of 5 damage from Spiny Growth though. Second Deathripper can now charge the Carnivean and does so. It connects on the first hit and gets a pair of boosted damage rolls with the 3 focus. It deals 11 damage and takes 2 from Spiny Growth. The Necrotech hides behind the more damaged Deathripper and repairs 3 damage. eGaspy moves away from the building, away from Lylyth.

Shepherd heals the Carnivean for 1 restoring its body. The Carnivean attempts to double-handed throw the Deathripper and misses the (boosted) attack roll. It then attempts to bite the thing and whiffs the (boosted) attack roll. What a windmill. Lylyth misses her first shot at a Cephalyx, but hits and kills with her second shot (darn). She then hits a Drudge with Eruption of Spines, killing only one Drudge, but turns the nearby Deathripper into “swiss cheese”, having dealt damage to every system without knocking anything out.

Guess what? eGaspy upkeeps Hellbound, each Deathripper again gets 3 focus. The two Deathrippers chomp on the Carnivean and kill the big beastie. The Drudges attempt a charge, but only one reaches Lylyth, missing her DEF 16. A Drudge kills the Shepherd.

Out of beasts and with half a battlefield and an entire tarpit between her and her prey, Lylyth makes her escape. She swings at the Drudge engaging her and misses. A second attack kills it, but the tough roll means it’s just knocked down. She slings Eruption of Spines at a nearby Drudge and misses. The knocked down Drudge offers no resistance as she flees the battlefield.

I lose horribly. Not only did my entire force get wiped out, I barely killed a thing. I attempted to use the building on my left as a pick, slingshotting around it into the back of his forces, but when I used an 11 pt beast to kill a 1/3 pt solo for an entire round, I really gimped by ability to quickly move around the board. My dice also failed me the entire last half of the game. I couldn’t hit anything!

The worst part is, my opponent didn’t even use half the stuff in his arsenal! eGaspy, for an epic caster, as nothing more than a focus battery for the two Deathrippers. Those two little ‘jacks with sustained attack just destroyed my entire army. And, even if I had been able to get something in charge range of eGaspy, Hellbound would have stopped it. Lastly, the tarpit with tough negated most of the power of Lylyth’s tarpit clearing spell, Eruption of Spines. I would have done a bit better with clearing the Drudges if they would live after a bow shot…

Things I need to focus on doing differently:

What do you think I could have done differently (besides everything)?