It’s been a while since I had a battle report for you, so it’s about damn time, eh?  Enjoy!

We’re part way into the War-Torn Alliances league, here in Virginia, and on Thursday, I had the pleasure of playing against Chris’ Retribution at 25pts.

My list was an expansion of the Legion battlebox, adding a second heavy and some support to play on Lylyth’s ability to run a mini Shredder Swarm.

I had league patches and bits from a group bits order to pass out, so Chris was kind enough to set up the board and pick an objective.  He chose the League specific “Whirling Gauntlet” Scneario.  It features a zone on the opponen’s half of the board you need to control, as well as a 5″ cloud AOE that randomly scatters every turn.  Any model it lands on gets thrown, and any models fighting inside it suffer -2 to hit. 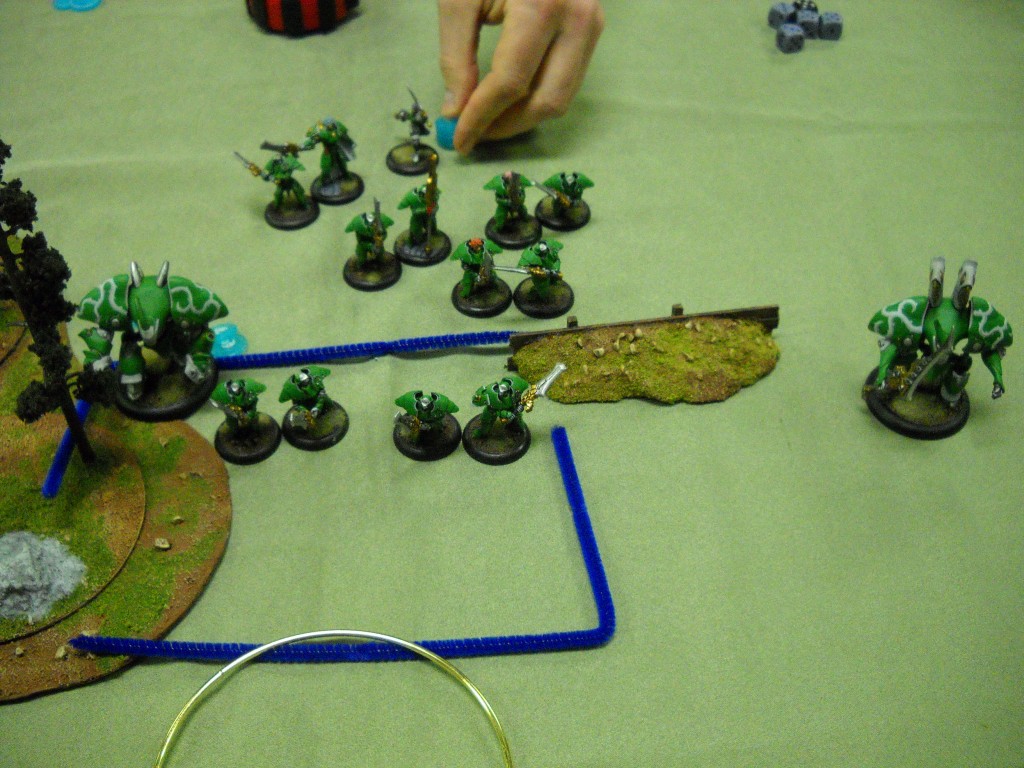 Chris’ forces moved up, the Sentinels moving in pairs for their +2 ARM bonus.  Kaelyssa tossed Banashing Ward onto the Sentinels, as well as Phantom Hunter onto the Hydra.

That blue box is what I’m supposed to contest for the scenario.  It’s looking awfully crowded already… 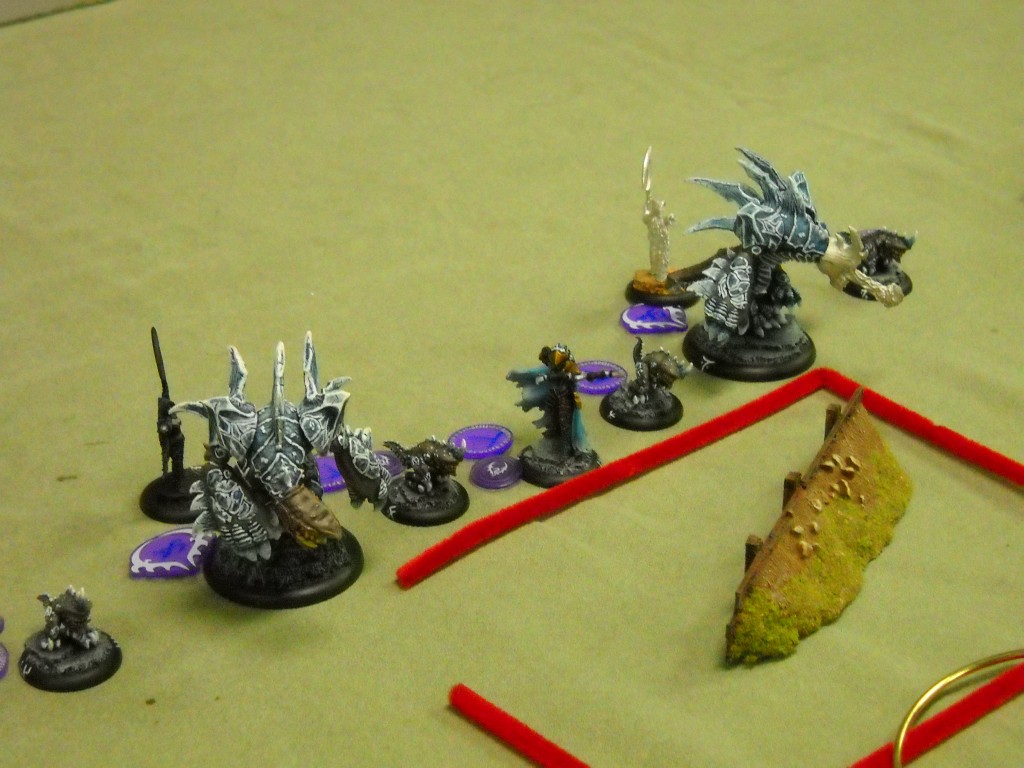 I walked my forces right up to the edge of the zone Cris needed to control, and popped defensive animi on everyone.  My turn ending caused the Whirling gauntlet to move, and it ended up deviating straight at me.  Luckily, it ended about a quarter inch away from Lylyth.  Whew! 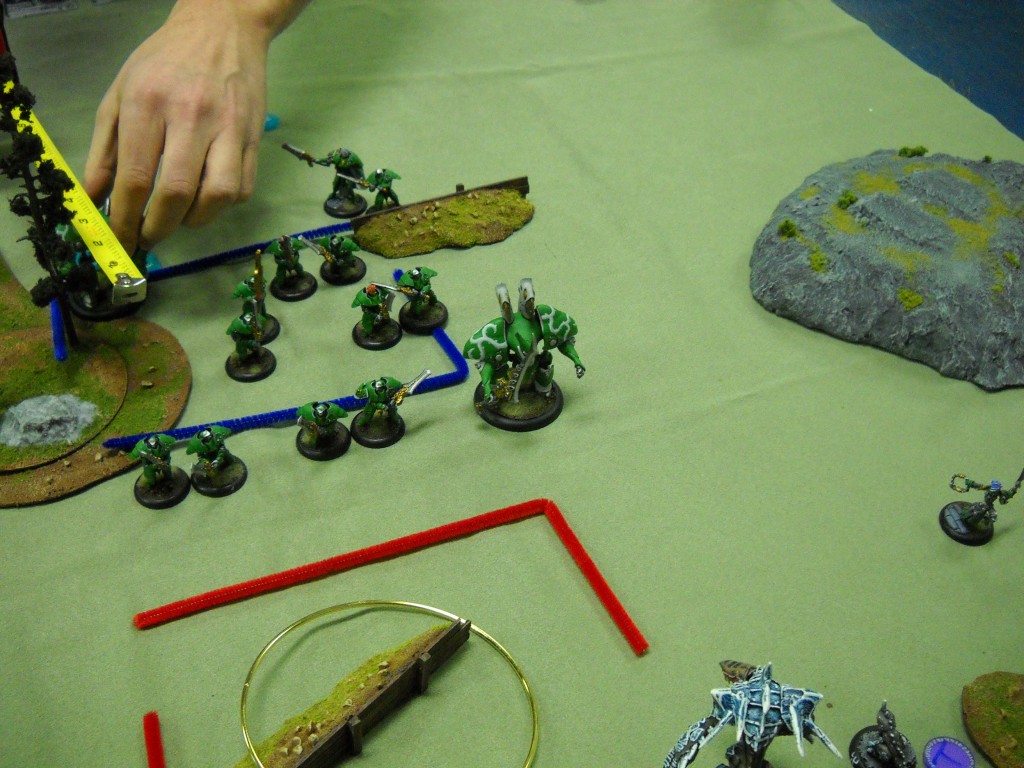 Chris’ forces advance forward, and offer very tasty targets.  The Hydra advances and fires off a RNG 15, POW15 shot into the shredder at Lylyth’s heels.  It lands, and does significant damage to it, and 4 of Lylyth’s 15 health boxes are gone.  Right when I’m getting ready to choose my charge targets, Chris pops Kaelyssa’s Feat.  I can’t target anything with a charge. 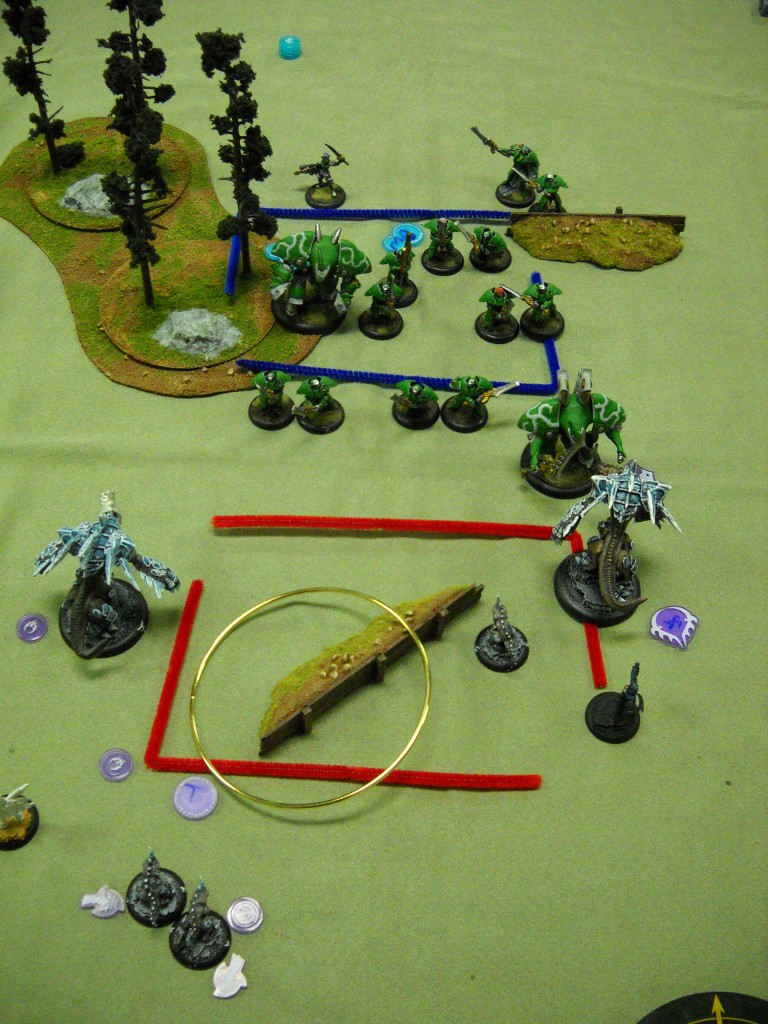 Since I can’t charge, I simply walk forward to try and shoot.  Unfortunately, the Carnivean ended up in combat with the Phoenix (due to reach) and couldn’t spray.  The Ravagore shot something, but I don’t remember what, and it wasn’t that significant.  One shredder went off and ate the Mage Hunter Assassin approaching my right flank, and another went up to fill some of the void in the red control area.  I couldn’t let him take control of it!

I don’t have a picture of Chris’ turn, but rest assured, it was spectacular.  The Phoenix maneuvered around the Carnivean, and promptly wiffed it’s initial attacks.  Once it got used to the Carnivean’s odor, it was able to connect with some extra sword hits, and promptly dealt significant damage.

Then the Sentinels charged.

Then my Carnivean and Ravagore ceased to exist.

On my turn, I started doing desperate things.  I tossed some shredders into the red control zone, continuing to contest it.  The shredder that ate the MHA came and tried to eat a Sentinel, but was a bit too full and sluggish to hit with it’s bite attacks.

One of the Shepherds took the death of the Ravagore personally, and led two of the shredders on a charge at the offending elves.  The Shredders take out two of the three models, and the Shepherd picks up the spare! 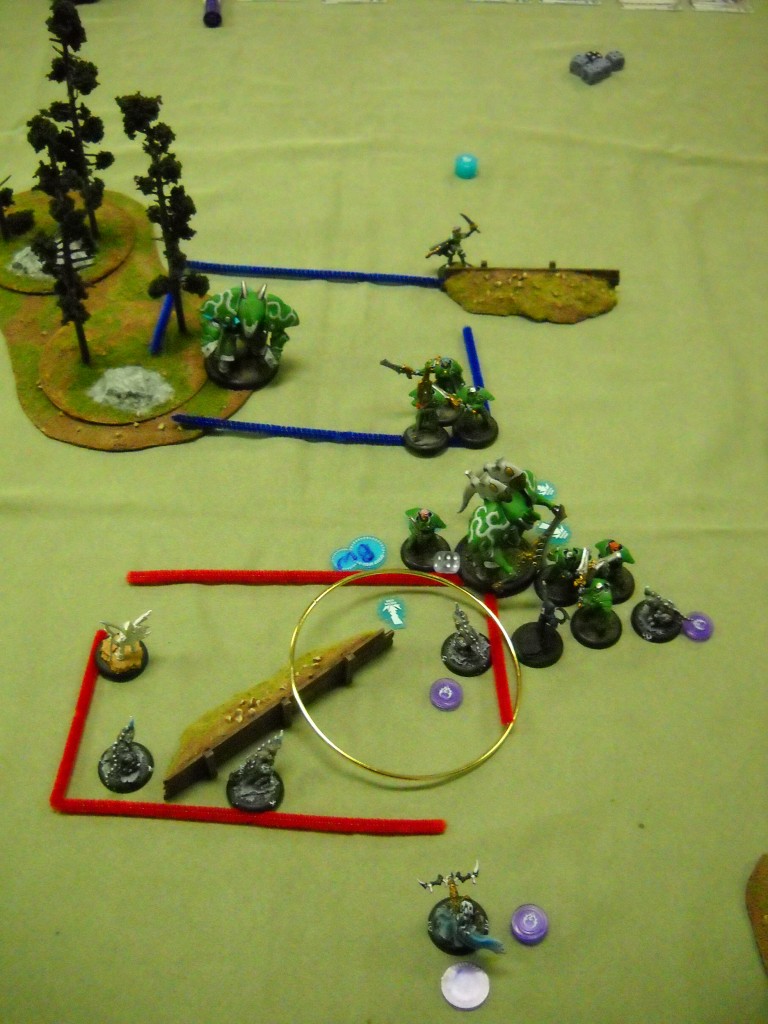 Chris’ forces bat cleanup this round.  I’m left with Lylyth and a single Shredder.  Lylyth has a Phoenix in her face, and no easy way out. 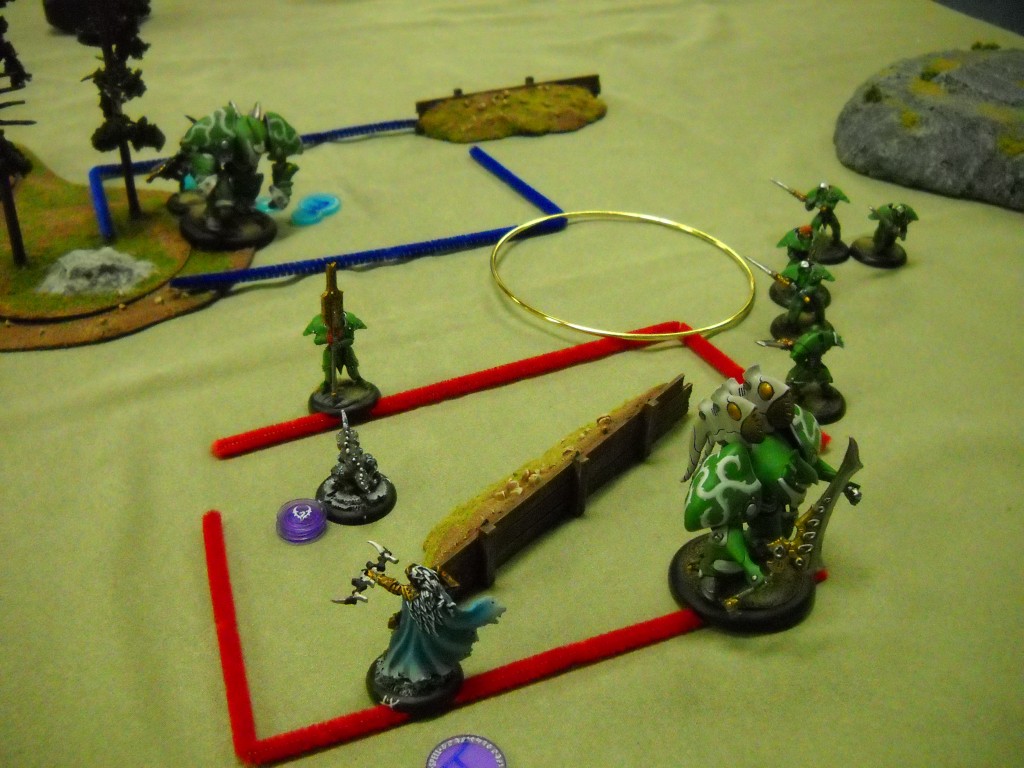 The remaining Shredder launches itself at the UA, and eats it and his friend, leaving the Standard Bearer playing lampshade, hoping to not be noticed.

Lylyth pops Tenacity on herself, and walks out of combat with the Phoenix, chancing the free strike.  Luckily, the Phoenix rolls a 4 to hit, and misses.  Lylyth can’t see Kaelyssa for a last chance shot, so she shoots the Hydra, dealing 1 damage to the ‘jack’s shield.  Lylyth then uses Eruption of Spines to hit Kaelyssa with a POW 10, but doesn’t do enough to end the battle. 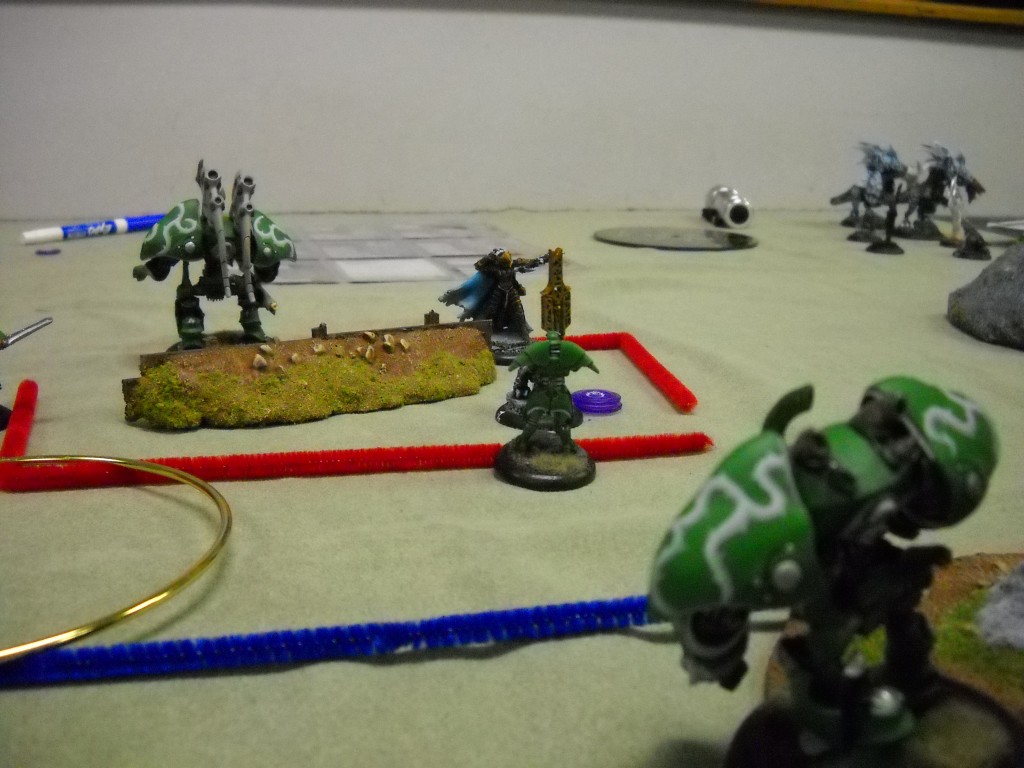 The Hydra gets fully loaded with Focus, and braces itself for a very important shot.  The Hydra hits, and with Dice+1, Lylyth is but a smear on the battlefield.