For those of you playing in the War-Torn Alliances: Gnarls league, you know there’s a hobby aspect to the leagues this year.  I, for one, think this is a fabulous idea.  Most of the players at my LGS are interested in painting, and they want to play with painted armies, but finding time for painting toy soldiers can be hard when you have families and jobs.

The challenge for the Gnarls League was to paint three (3) 50mm Objective markers.  These are large bases, and they can have anything on them.  They could be a pile of scavenged parts, an ammo dump, or even a relic.  Since several of the players in my area only play one or two factions, I opened the challenge up to include 40mm flags as well.

Here’s what I cobbled together over the course of the League: 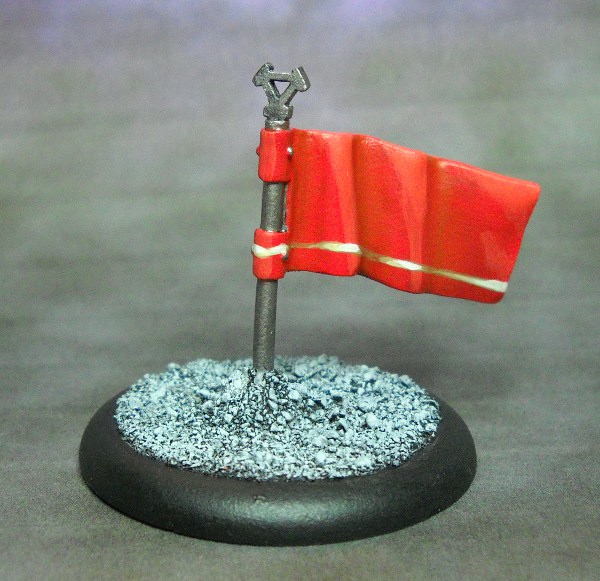 The first thing I did was make a basic flag.  It’s on the proper 40mm base, and it’s flocked with gravel.  The flag is from the Khador Man-O-War Kovnik.  It’s nothing special, but they really don’t need to be.

This is a Menoth Sarcophagus.  It’s constructed primarily of pink insulation foam, which I did not seal well enough before priming the whole thing white, but using mobile options for spray foam are really useful for this.  Because of this, the foam was eaten away here and there.  I’m going to just call it “weathering”.  The shield is from the Paladin of the Order of the Wall.

This is a Khador supply crate.  The wood bits were purchased at Michael’s, the craft store chain.  I clipped and glued, and glued and clipped until I had a box.  I then based it according to my normal Khador models, and then I free-hand painted a bunch of text all over it.  The line next to the Khador symbol reads “Cortexes”, and the three lines at the bottom read “Handle With Care”.  The red text on the side reads “Fragile”.

So, there you have it!  Some fun, custom, one-of-a-kind Objective Markers!

What did you paint up for the Gnarls League?