First, sorry for the last of posting recently.  Between work, leagues, planning for the NOVA and cleaning up the house for friends being in town, there just hasn’t been room for anything of substance to be posted.  I’d rather give you nothing than give you crappy posts.

I also know that the 4 of you that voted in the last poll chose Trollbloods.  I have two Impalers on my desk right now, but they’re proving far more difficult than I’d envisioned.  I reposed one arm so they looked a little different, and he was subsequently dropped on the garage floor.  Arm broken, throwing spear broken, speartips in the quiver all bent up.  It was awful.  Their skin is also proving to be a nightmare to paint.  Troolblood base is incredibly strong, and does not want to 2-brush blend at all.  I have the un-damaged impaler done with the skin, but I don’t know if I have the patience to fix the other guy.

I’m considering dropping it from my list and substituting another light troll.  I think a Pyre may be in order.  Gunny, Bomber, Impaler & Pyre troll.  Not too shabby for 15 pts, eh?  Alternatively, I could drop the Pyre for a group of Whelps and a Thumper Cannon.  Perhaps that’s the better way to go…

Anyway, while I was procrastinating on the trolls, I worked on some more Khador.  It’s taken nearly a month, but I’ve finished a unit of Winterguard Infantry!  Overall, they took about 30 hours to complete, but with not much time per day, they still took forever.

These sculpts are one-piece models, but they still have some life to them.  I swapped out the puny axe on the leader with one from the male Manhunter, as it helps draw your attention to him and symolize his rank.

This isn’t a very tactically sound 25pt force, there’s too much ‘jack for Sorscha, and not nearly enough protection for the Winterguard, but I wanted to paint them to help convince myself that the grey chunks on the ‘jacks properly conveyed the grey portions of the Winterguard Great Coats.

I’m happy with how everything turned out. 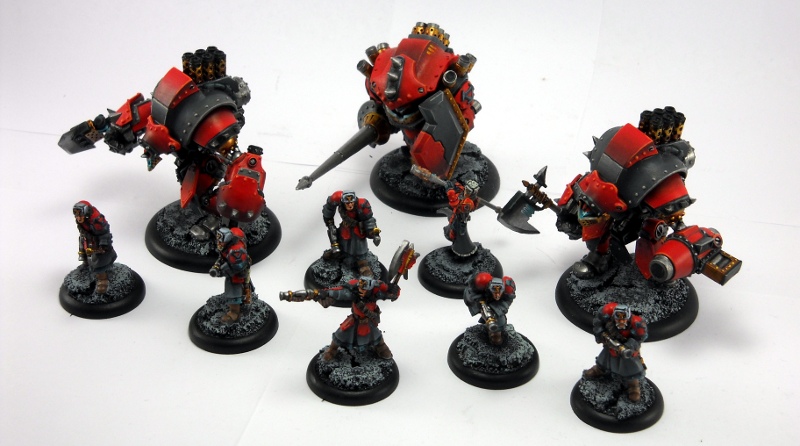 Of course, now that I’ve taken pictures I see I’ve forgotten to pick out the rivets on their shoulderpads, and I need to give the Leader’s cigar some life.  I think a bright orange tip would look cool.

The next stage of the Slow Grow puts us at 35points.  I’m thinking a Koldun Lord to marshal the Destroyer is a good idea.  That will give the Destroyer 2 pseudo-focus a turn, and take that strain off Sorscha, so she can feed it to the Juggernaut and Spriggan.

What should I do with the last 8 points (provided I have to keep using this force)?  The Winterguard UA and some Rocketeers would be good.  So would Kovnik Joe, and a Mortar crew.  Alternatively, I do have 15 Man-O-War to get to, and medium bases would do wonders to hide Sorscha from all the shenanigans available to my opponents.

What do you think I should paint next?