I’ll be completely honest, I was pretty well spent after TempleCon.

Painting every spare minute for almost a month and a half will do that, though.  Additionally, it feels like there’s been some family or friend or work related thing every weekend in 2015, so my usual spots of big hobby time (weekends) have been cut in half.

However, after nearly a month of not painting, I’ve put some time into some commissions that have been patiently waiting for some attention, and they’re finally at a spot where I feel I can show them off. 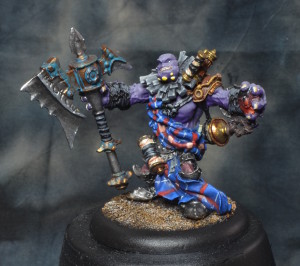 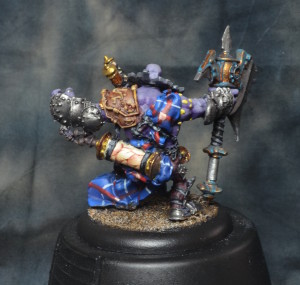 My client wanted purpleish skin and yellow stones, and everything else was to be whatever fit that.  I found that the GW paint range as the most purples, so we worked to find a 4-color range that fit the look he wanted for the skin.  Madrak sits in the top half of that range, since Troll warlocks are traditionally Albinos.  The Tartan pattern is straight from the Forces of: Trollbloods book.  At first, I tried a green base for the cloth, but it was way too garish with the overwhelmingly purple skin.  Blue fit much better.

This model represents a few firsts for me as well.  I’ve always shied away from weathering, afraid of ruining a perfectly good paint job.  Madrak is a scheme test model, so ruining things was kinda-OK.  Since the colors we’re using are already kinda outrageous, I figured why not throw some verdigris on the brass bits of his legendary Axe, Rathrok.  After washing the Molten Brass (P3) with some precious Gryphonne Sepia (Old GW), I then put some watered down Meredius Blue (P3) into the creases and then splattered it around.  I think it gives it some nice character.  The other really fun thing on this model was doing the marble on the scroll case hanging behind Madrak.  I first painted the base cream with a Menoth White Base (P3) mid-tone and shaded down with Hammerfall Khaki (P3) and highlighted with Menoth White Highlight (P3).  Then, I used watered down Brown Ink (P3) to draw some blob-y shapes, and refined those and added some depth with less watered down Brown Ink.  I’m very happy with the effect on both.

He still has some work to be done, though.  The runes on his axe need a glow (I’m thinking green, perhaps?) and I want to add one more set of highlights on his skin to really push him higher in value (luminosity).  His base will get extra details after he gets sealed.

Next up are a pair of Player Character models for a Dungeons and Dragons game.  These are the first two of six characters I’m making for the adventuring party.

Let me introduce Lorelei, the Half-elf Bard of Lore. She was described as a lithe, sophomoric and energetic individual who takes orders from no one and follows her heart as she seeks out injustice and does her best to make the world a better place. Notably, she has short, straw-berry blonde hair and bright blue inquisitive eyes.

The client picked out her mini, (Reaper, #60172), and we swapped out the stock halberd for a flute from the Reaper Musical Instruments pack (03032).  I couldn’t use the stock Flute (of course), so I actually cut off the tip and bell and used Brass Rod to re-create the tube of the Flute.  I then pinned the ends back on, and painted the finger holes. 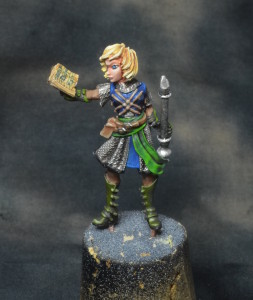 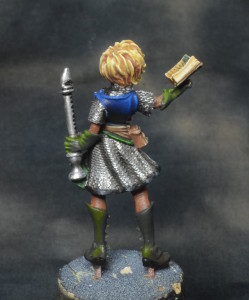 The next adventurer is Sarona, the Halfling Rogue. Sarona is a bold, fun-loving and clever person with dark red hair and green eyes. She also wears very elaborate and fancy clothes under her cloak. Again, the client picked the mini (Reaper, #60178), and there are no modifications to this one. 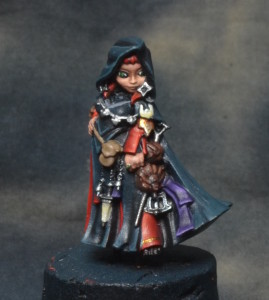 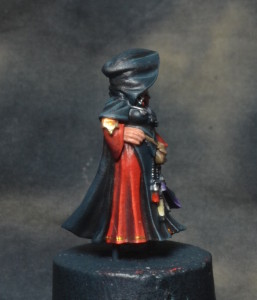 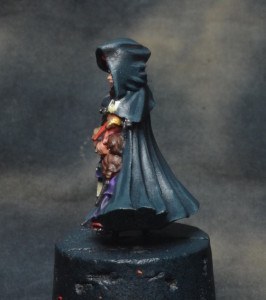 Sarona was airbrushed Coal Black (P3) over black primer. That handled most of her cloak, which is easily 70% of the model. I then painted her face and hair, dress and trinkets. I think the gold trim on the dress is a good way to imply wealth / expensive taste which seemed to be a key feature of Sarona’s personality. I wanted the cloak to have just a little bit more contrast, and mixed some Menoth White Base into the Coal Black mid-tone, and just added in highlights on the creases in the folds.

The last model is something I’ve been working on for just the past few days, as something to test out an idea I’ve had in my head for a bit. I have roughly four GW armies sitting on the shelf (Tau, Dark Angels, Eldar, High Elves) still almost entirely on sprue. The Reaper minis have been so much fun to paint, that I wanted to paint something else that wasn’t Privateer Press. So, I dug through the spare models in the box (stuff not set to go into the army and thus good for testing paint schemes) and found that I had an entire 10-man squad of Eldar Guardians.

Eldar, for me, have always been top-shelf models. By that, I mean that I’ve always held them in high regard from a painting perspective. They are all graceful lines, they always have loads of empty space for fancy designs or free-hand, and there’s rarely a bad looking Eldar army out there. When GW painters want to show what they can do with a clean model (as in not weathered) – they go with Eldar. They’re a painter’s faction, and I’ve never felt that I was good enough to even bother with buying and painting Eldar models.

One of the things I’m doing in 2015 is not letting myself get in my own way. No more stupid, arbitrary rules. Just go for it.

So, here’s a test model for an Eldar Scheme. It’s not done yet, but it’s the basic idea. 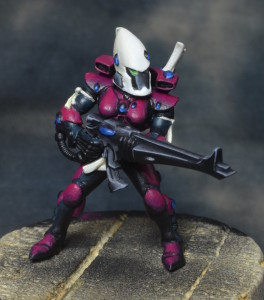 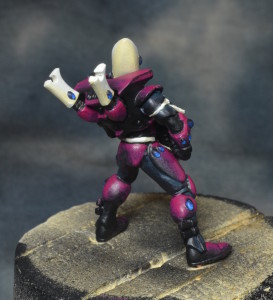 I’m not sold on the white cloth bits and the pink clearly needs a highlight, but I’ve finally gotten the idea “on paper” so to speak.

The Guardian is done entirely by hand, save the black and white primer.  The pink is Murderous Magenta (P3), the same core color that I used on the Khador Black & Pinks a few years ago.  It’s blended into the black basecoat over about five layers.  On. Each. Panel.  But it looks good, no?