After the PP Keynote, I grabbed my Khador and headed down to the game floor.

I found friend and fellow blogger, G’dayBloke of Lost Hemisphere fame packing up after a mirror match, Kaelyssa vs Kaelyssa.  I offered to throw down quickly, so I got set up while he went and reported his game.

We decided to run a quick 25 point game, since I hadn’t done a game at that size yet, so I took my goofy ~15pt army and tossed in a Spriggan:

We were playing on a scenario table.  Half was supposed to be an underground cave system, and there’s a 40mm base inside that’s a “command” post.  The defender wins by killing the enemy caster, the attacker wins by same, or by taking out the command post.  I don’t recall it’s stats.

Obviously, we were doing something goofy here, and we had kinda wonky armies, but that’s what Iron Arena’s all about.

Anyway, I ended up attacking, and I immediately was swarmed by the units of Mage Hunter Strike Force. 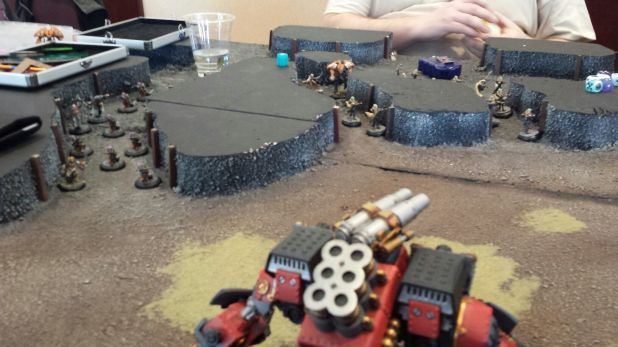 They scratched up Conquest and the Spriggan, while the MHA snuck up the side and tried to decapitate Butcher: 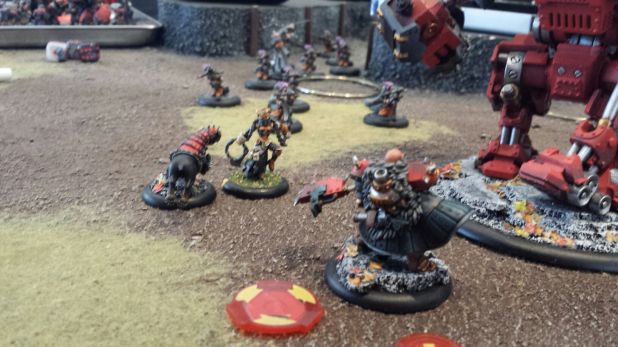 She hit Butcher hard, but didn’t kill him.  Unfortunately, the following turn, Eiryss was able to tag the Butcher and disrupt him, and after that it was an exercise in futility.  Conquest kept popping the Aspis and catching Kaelyssa in the blast damage, but she camped most of herfocus and was nigh untouchable.  With Phantom Seeker built-in, the Mage Hunter Strike Force could see through the Conquest, were able to ignore my Iron Flesh and non-existent focus (gee, thanks, Eiryss!).

The MHSF left Butcher with 3 health left, and then Kaelyssa walked forward and showed them how it’s done.

I ended G’dayBloke’s losing streak, and he ended my winning one.

After wandering the vendor spaces for a bit after lunch, I ran across Privateer Press’ Tony Konichek, Producer and Editor of PP’s videos.  I had been pestering him for a game all weekend, and he finally relented.

Tony’s Protectorate is gorgeous.  It’s a cream and mint combo with lots of bright gold. 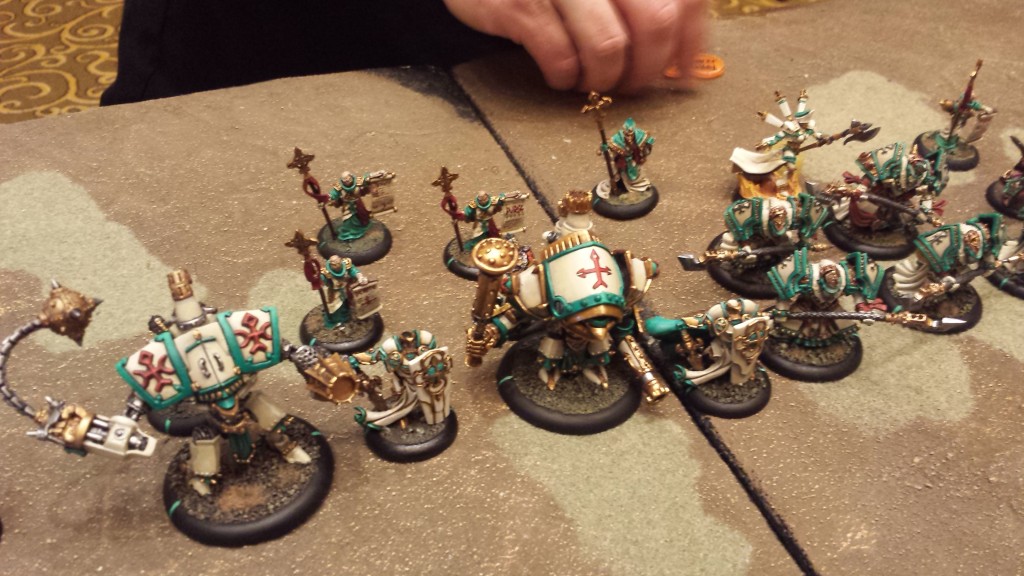 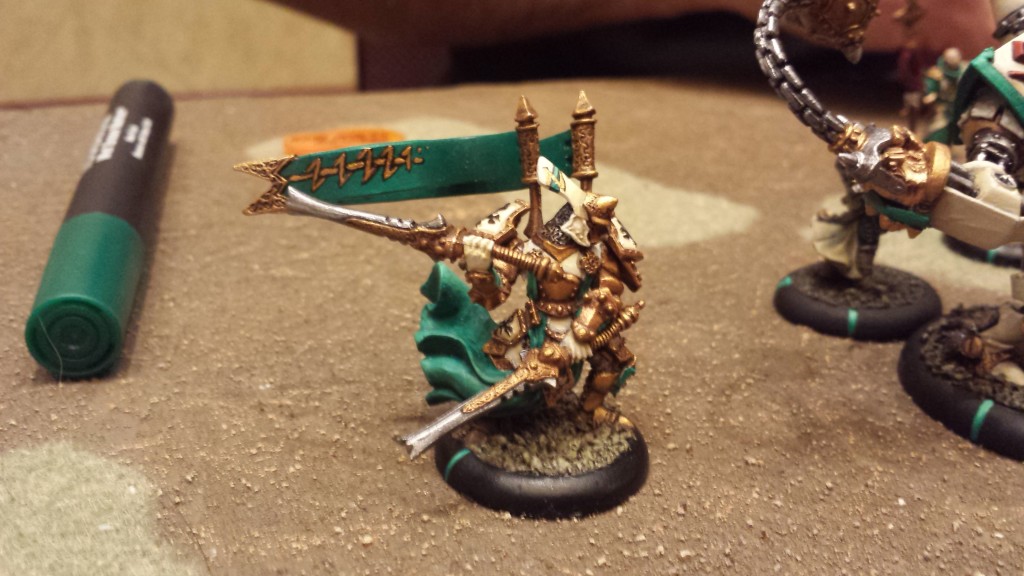 Tony was running Feora2 with a slew of ‘jacks, Bastions for a center and Initiate Tristan Durant with a Redeemer! 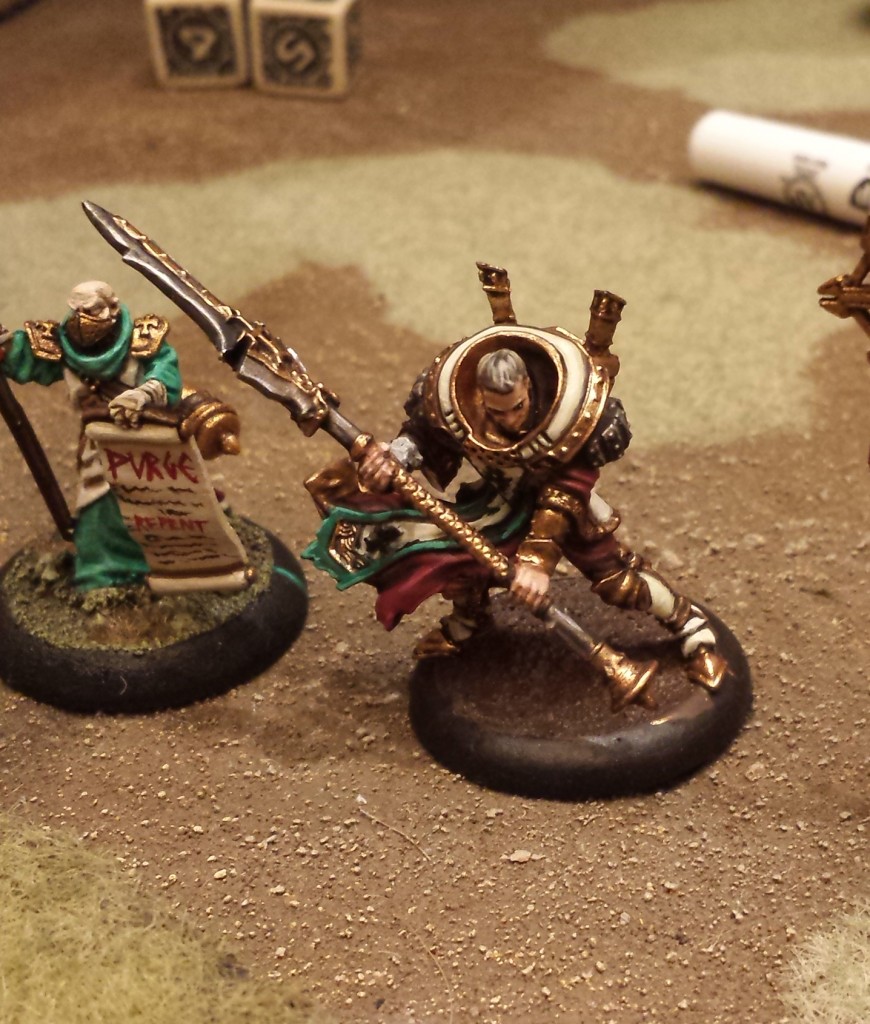 After trading pot shots between the Redeemer and the WGI, Eventually the Bastions and Conquest clashed.  They dealt some damage, but nothing the Mechaniks couldn’t handle.  Conquest then swept them off the table, leaving one man left.

The Spriggan was making postures at the Paladins and Tony’s two Heavies on my left, and eventually the Paladins committed and played at being speedbumps.  With the Conquest having been lured into the middle by the Bastions, the Reckoner charged it.  When Conquest gave it a little love tap, it Enlivened deeper into my lines, trying to angle for some shots across my army towards Butcher, who was hiding on the other flank. 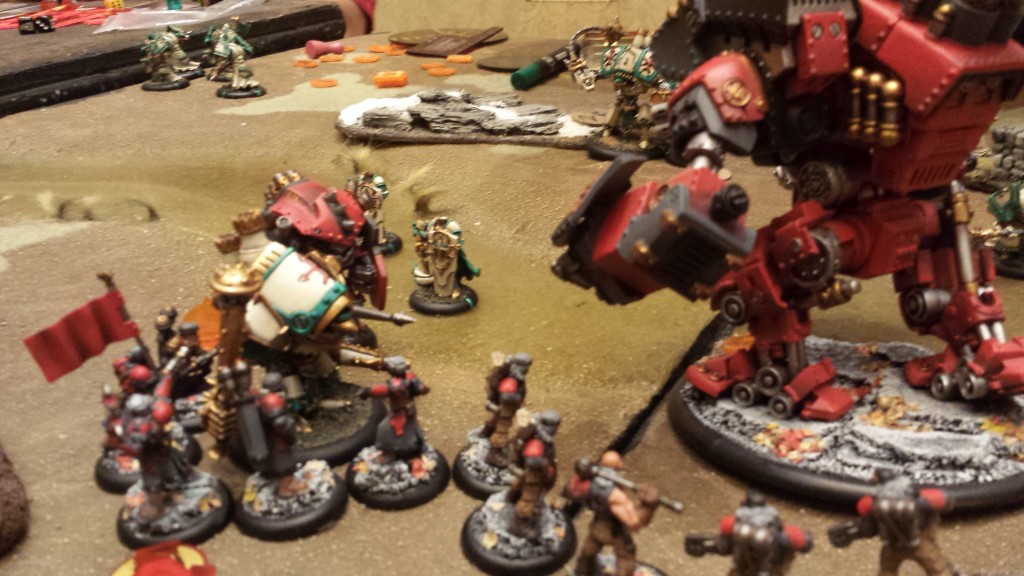 The last few WGI swarmed it, while the Spriggan looked on with jealousy.

At this point, Conquest had an open vector on Feora, and took it.  It took far too many attacks to open up the reach lane past the Vassals flanking the Vanquisher Feora2 was hiding behind, and Conquest whiffed when it finally had it’s moment.

Tony had Ignite on Vilmon (via the ArcNode), who charged Butcher under Iron Flesh (for all the good it did against Blessed Weapons), but missed.  The Vanquisher moved forward next to Conquest and shot some stuff, and Feora got as far through the hole between the Vanquisher and Conquest, so she could cycle Ignite onto one of the other Paladins. 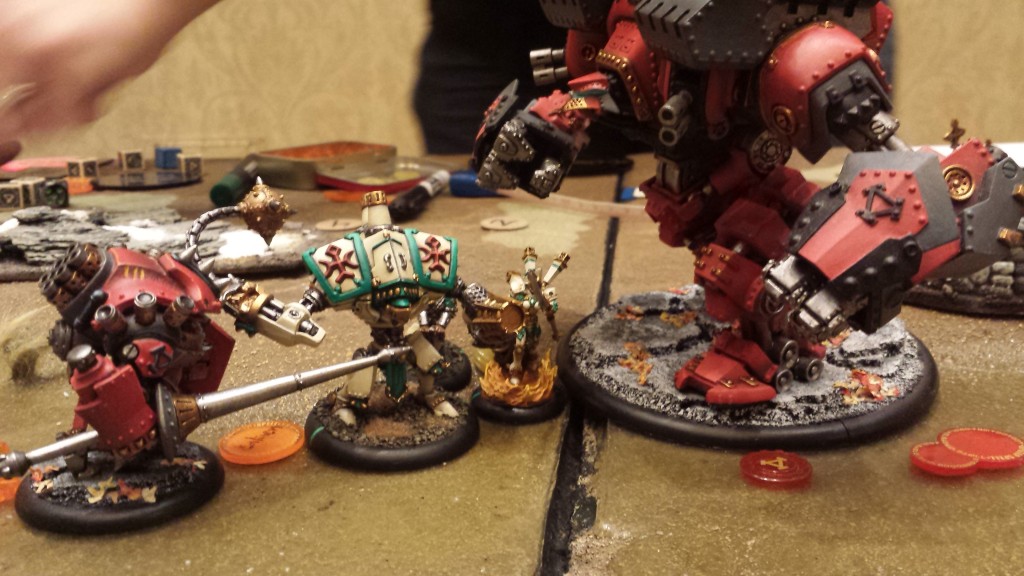 The Ignited Paladin also happened to miss on his charge attack.  Then the last one followed suit, leaving Butcher surrounded by Blessed Weapon Masters. 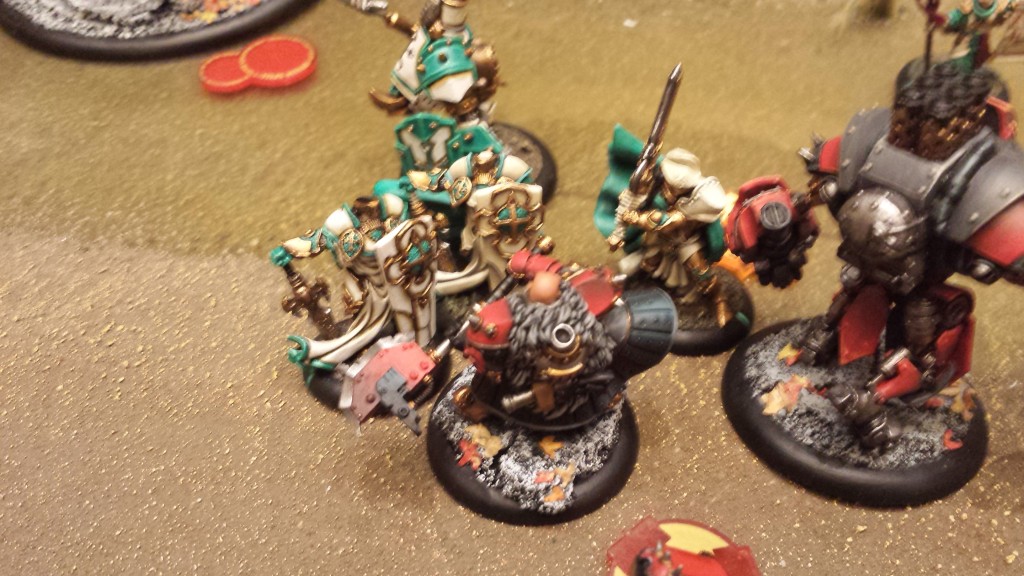 However, Feora was on no focus, and her positioning made it fairly easy for a fully loaded Conquest to take her out.

This was a great game, and had some insane dice spikes.  At one point, the Redeemer had a shot on Butcher who was hiding behind cover, it needed a 14.  It boosted, and Tony landed a 16 (5-5-6).  He was at Dice minus four on the damage, and boosted as well since he had finally connected.

After trying out a few games being demo’d, and a not-very-quick five hero game of Super Dungeon Explore, I played a game with Elizabeth.  It was roughly 1:30am by this point, and I didn’t remember that she played Retribution until after I had already committed to the game.  If you can’t tell, Ret really just winds me up.  Earlier in the day, when we were chatting with G’dayBloke, she had expressed interest in starting playing some other armies and wanted to try out a colossal.

So… we switched armies for a game.  She ran my stock list (plus Gorman, finally!).  I ran:

We played on the same table I played G’dayBloke on in Game 2.

My MHSF were out front to be a tar pit and pick off support, then my Heavies, then the Halberdiers who were to be the real workforce in the army.  I tossed the Artillery on one flank with the Ghost Sniper (his mission was Kovnik Joe), and the MHA on the other flank all on her own.

The Attacker goes first in the scenario, so Elizabeth spread out the WGI, made some pot shots with Conquest, and passed the turn.  I advanced with the MHSF, shot up the Spriggan and killed a Mechanik… 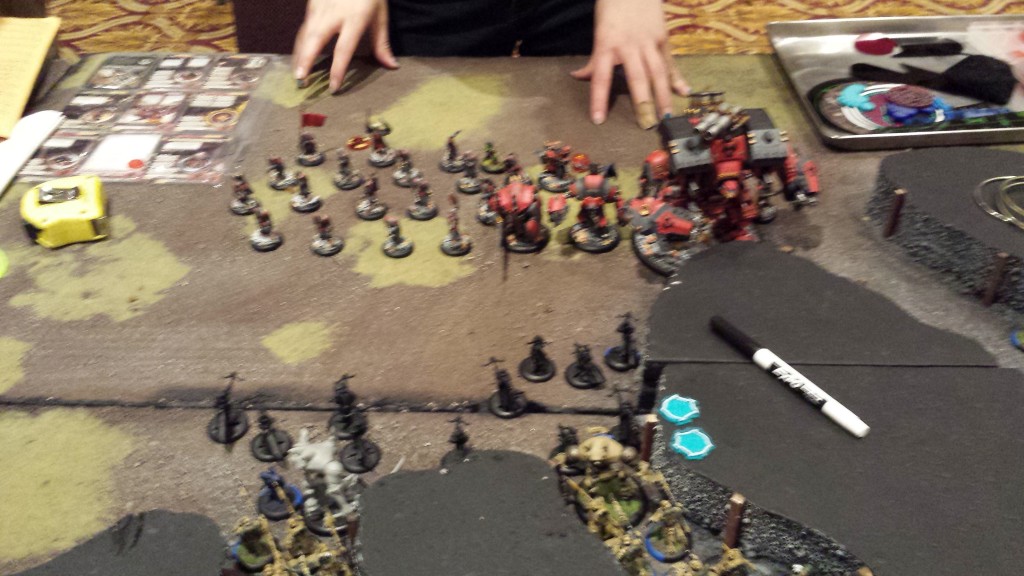 And then the Ret player charged up the Deathstar, and my MHSF evaporated, along with the leading elements of my Halberdiers.  I retaliated by lobbing aimed, sniped AOEs from the Stormfall Archers.  Wow, range 16 on Infantry is amazing.  The WGI can only hit half that distance.  The Phoenix walked forward and Compusted, killing four more WGI that managed to survive the carpet bombing. 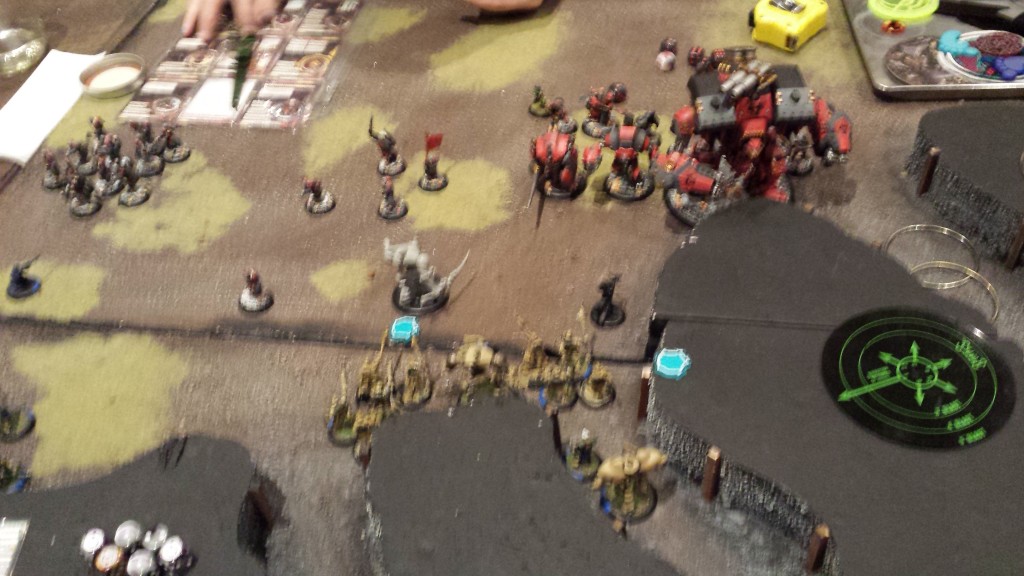 Then the Spriggan killed the Phoenix, and Reinholdt ran up to be a speedbump in between Discordia and the Spriggan.

At this point, it was roughly 3am, and neither of us were very coherent.  I had a brilliant idea, and went for it.  I loaded up Discordia with focus, and it walked up to Reinholdt… 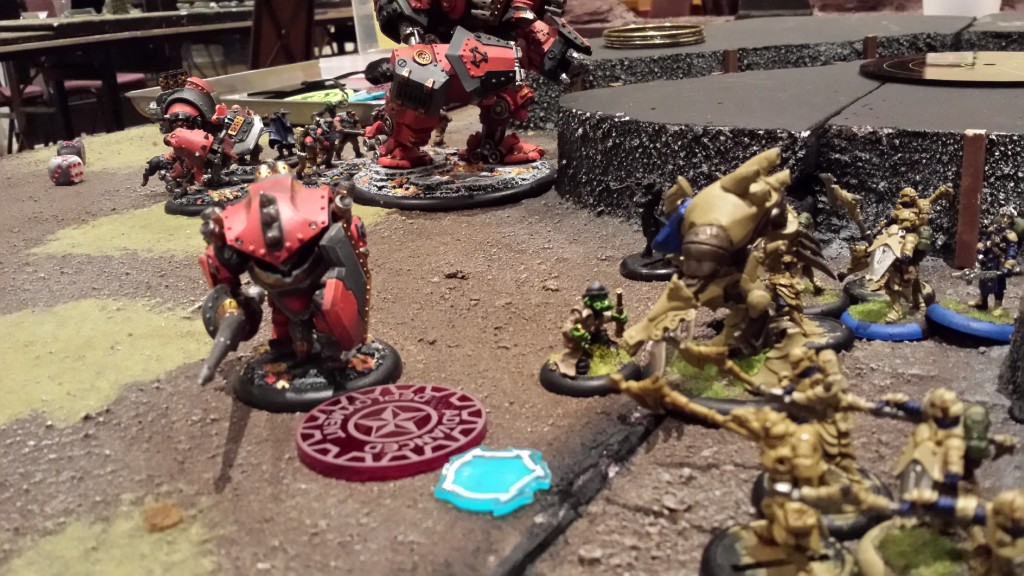 I spent a focus to do a double handed throw, boosted the hit, and snagged the slippery Gobber.  I then proceeded to bounce him off the Spriggan’s shield, leaving just a coat and bowler hat behind.

Take that, ya filthy animal.

Issyria moved into B2B with the objective I needed to score on, tossed Crusader’s Call on the Halbs and then feated, giving them essentially Signs & Portents.  They tore the Spriggan to shreds, and nearly took out the Juggernaut.  Had I committed more to the Juggernaut, it would have died, it only took three of the six on the Spriggan to take out since it was already damaged by the MHSF. 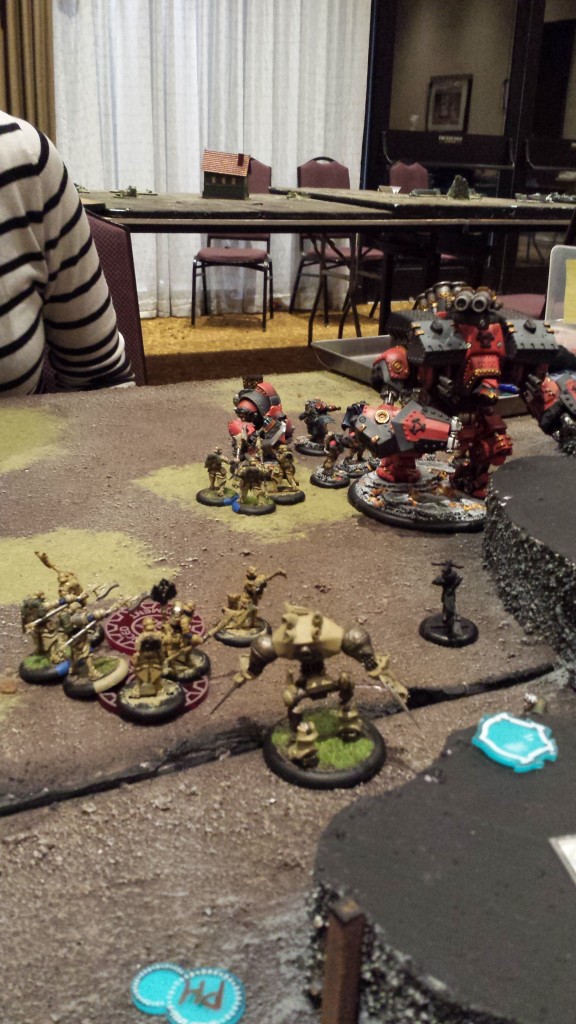 Well, Conquest wasn’t happy with that, so he came to have a talk with the Halberdiers about this.  Meanwhile, Joe and the WGI ran and toughed to engage the Stormfall Archers, and Gorman Black Oiled the MHA. 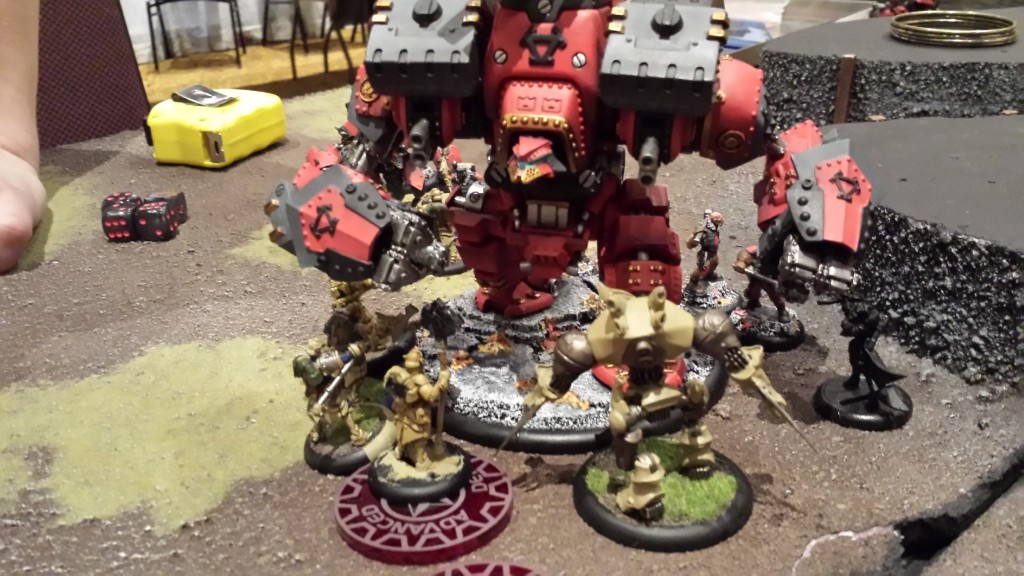 Butcher dropped Fury onto the Conquest, and it used the Sweep Power Attack to take out a Halberdier and half of Discordia.  I guess one guy didn’t duck…

Once Elizabeth was done beating things up with the Conquest, I would have scored the winning Scenario point on my turn, so we called it since we were both exhausted and hungry.

Standards are not being maintained.

I’ll have to lose more games tomorrow, or I’ll be in deep trouble with my local players for not only playing games without them, but for having the dignity to actually win.

The shame, the disgrace!