This week, I played against Sheridan’s Legion.

His paint scheme is a cool, radioactive green with grey: 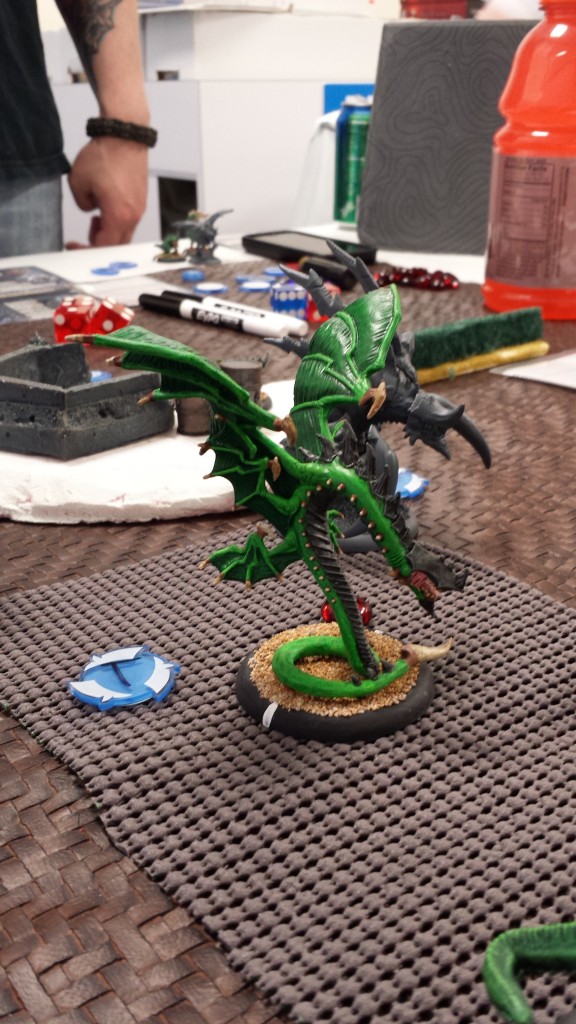 I deployed with my battlegroup off to the right, WGI to the left, and the Greylords way off on the left flank, hoping to avoid attention by hiding behind the big wall thing there.

Sheridan deployed most everything dead center.

I was going first.  I gave Black Ivan and Behemoth one FOCUS, which gave me enough to get Escort and Fortune up on the WGI.  Everything ran, except for Hark, who mounted the hill, and the Destroyer who stayed near him to lend the armor buff from Escort.

Sheridan ran everything also, handed out lots of Tenacity, and super buffed up one Scythean.

I upkept both spells, handed one focus to Black Ivan, and then moved Hark up and cast Broadsides.  Lots of people say it’s a trap, I think it’s fun.  My mistake here was doing Broadsides *before* activating the ‘jacks, because nothing was quite in range, so most of this was wasted with bad scatters.  I did remember to pop my feat, though, which helped.

All three ‘jacks fired into the unbuffed Scythean, not doing a whole lot.

The WGI moved up under Bob & Weave, and lobbed out a few rockets to no avail.

The Greylords only waled this turn, because I could see some good support solos heading my way.  I should have run them, so they would have been in Sheridan’s Deployment Zone, which would have had lots more targets.

Sheridan launched a Scythean at Black Ivan, which stung, getting off the Chain Attack and getting a free set of hits on Ivan and the Destroyer.  The Raek moved and Jumped to engage the WGI, and managed to hit two, but they Toughed through it.  Two more hits into a third one, and he finally succumbed.

The Angelius one-shot the Objective.

Sheridan also popped feat this turn, which meant that all his dudes got a full advance and swing after everything was over. 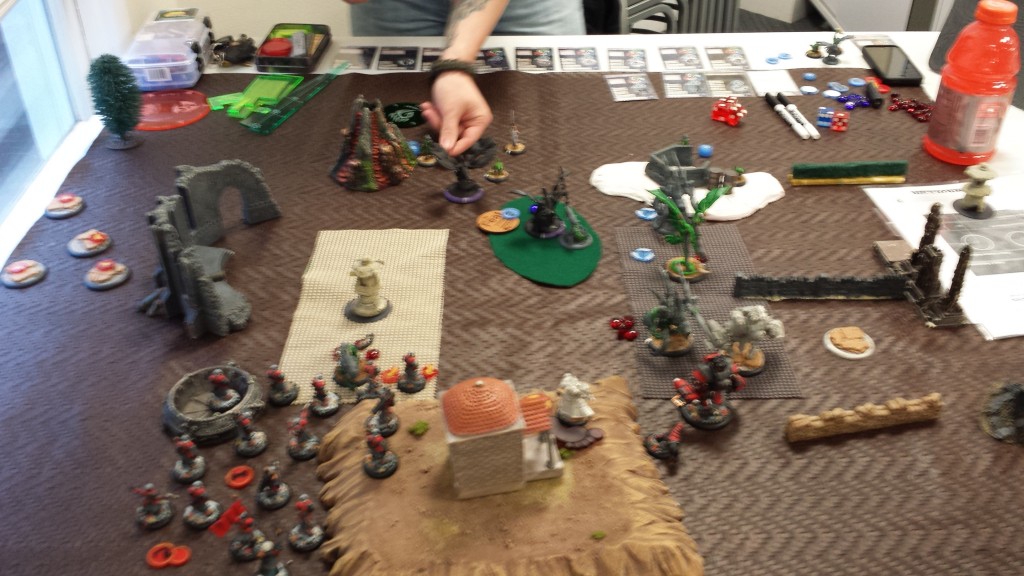 I was fairly distracted with five (5!) new players in the shop that night and getting Netrunner Decks built for later in the night, but here’s what I recall from the rest of the game.

The Raek and WGI slugged it out quite a bit, neither really doing much.

The Greylords were too easily distracted by the prospects of taking out a shredder to run around for good position.  They didn’t actually take out the Shredder, but the WGI who activated after them did (Yay rockets!).

The bulk of the interetsing stuff was with the battlegroups on my right.  The second Scythean charged in, taking out Black Ivan.  The Other one couldn’t quite take out the Destroyer.

The Behemoth walked in, and took out one Scythean in three attacks.

Thagrosh2 charged the Behemoth, nearly taking it out.  The Angel finished it off.

Harkevich kept all six focus, charged off the hill and beat Thagrosh2 to death with the mechano-ham.

Sorry for the shoddy notes and lack of pictures.  I’m headed to a Tournament Saturday, and I’m hoping to take home the Best Painted Army award.  I’ve been polishing off the WGI that I slacked off on for Templecon, and I put down snow on all the bases and everything.  All that’s left are arc-markings, shading on boots and details on Joe while I ask him the Best Friend Tag Questions with your best friend.