This week, I was able to get a game in against relatively new player, Justin.  He was running Retribution, using the following list:

We were playing on a white snow table, which will make some of his white primed models hard to see, so bear with me.

I won the roll-off, and had Justin set up first, since none of my models were unpacked, and all of his were.  Not a very tactical choice, but a good one, since we had about a hour and a half to get the game in before store close.

Justin set up his battlegroup and Arcanists in the middle, Sentinels on his left, Halberdiers and Thane on his right.

I split my WGI around Hark, the Behemoth and Black Ivan, and tossed the Destroyer on the right side of the pack.  Greylords went on my far right flank.

Justin’s Infiltrators set up as far from the Greylord’s magical sprays as possible.

(Below, the Infiltrators have already run on Justin’s turn 1) 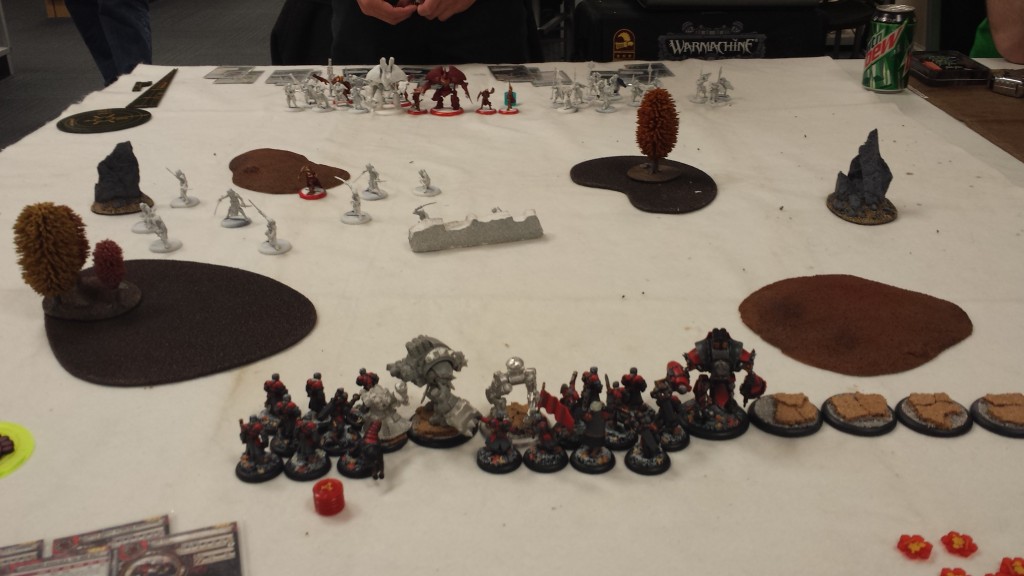 Harkevich went first, putting up Escort and Fortune on the WGI.  The Behemoth and the Destroyer both walked forward 6″ and boosted some gun shots into Discordia.  The WGI walked forward and tagged a few Infiltrators with their sprays, the rockets try to take out Eiryss3, only doing 3 damage to her.  Black Ivan helped by shooting more tricksy elveses, but I came up short of a break check by one (5/11).  Joe toughs the WGI.

The Greylords positioned behind an obstacle, the charge from the Halberdiers next turn being inevitable.  However, I forgot to do their ice freeze  thingy, which would cost me some easy kills turn 2.

Zack over there is unpacking the newest Netrunner expansion. 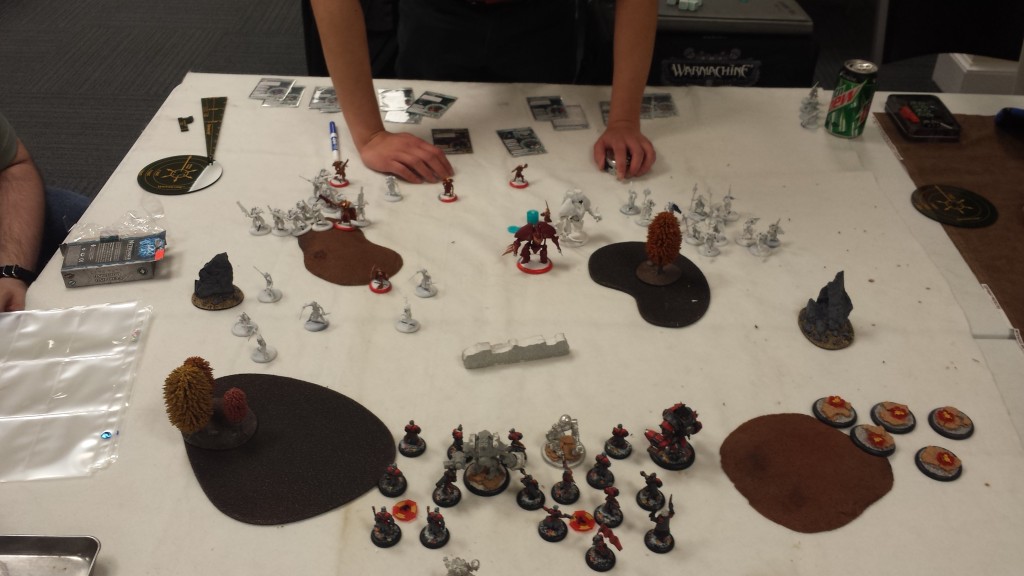 Inflitrators charge and reform in a bit after killing some WGI.  Halberdiers charge with help from the Thane, killing two Greylords.  Phoenix runs to the wall for node shenanigans, Discordia walks and sprays to kill a WGI or two.  Kaelyssa pops feat, so no charges and ALL THE STEALTH.

Hark upkeeps both spells, hands out all the focus and crosses his fingers.  The WGI re-position and spray the stuck-in Infiltrators, killing all of them (including Eiryss3) but one, who is hugging Black Ivan. Joe toughs the WGI.  Greylords do the same to the Halberdiers, but would have done loads better if I’d frozen all the Halberdiers last turn.

The Destroyer walks up to play with Discordia.  The Behemoth tramples up past the wall, and buys two punches on the Phoenix, getting past the shield and taking out about half the ‘jack.  Black Ivan swings and misses on the last tricksy elf.

This is the turn I should have popped my feat. 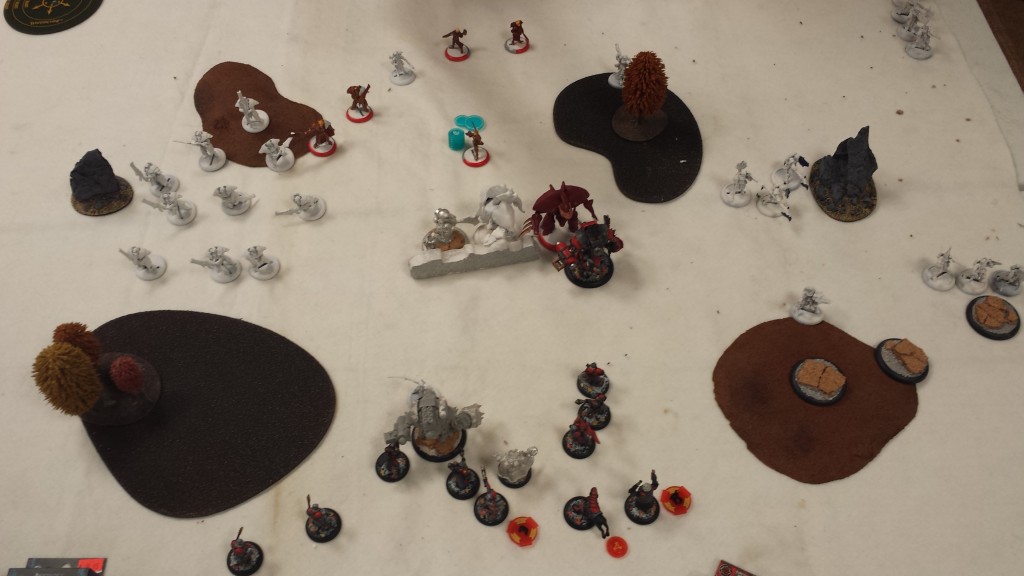 Sentinals charge, everything dies.  Well, the Behemoth sure did, at least. 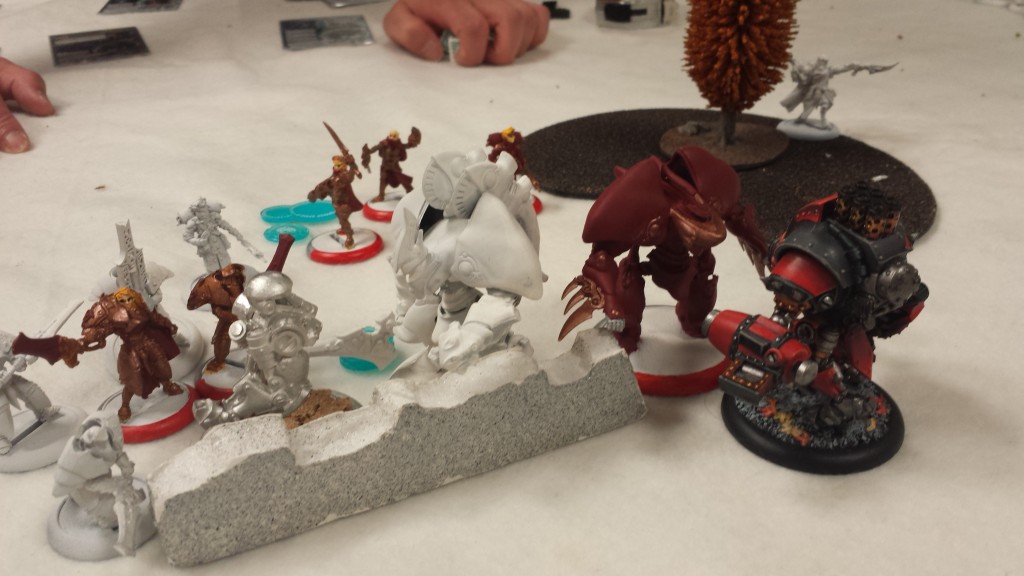 The first Sentinel to swing at Black Ivan misses, so Dodge triggers and he shifts back 2″, plugging a hole that the Phoenix could have used to get reach on Harkevich.  Three Sentinels were in B2B with him before he moved, so still got to swing, taking out his Bear Claw.

Discordia manages to take out the Destroyer’s Axe.  The Halberdiers manage to take out two more Greylords, leaving just one on three health.

At this point, my two remaining ‘jacks are stuck in melee with broken melee weapons, and I don’t have enough WGI to make Fortune work upkeeping.

Joe boosts attack rolls on the WGI, who manage to kill lots and lots of Sentinels.  Harkevich goes and moves up, boosting a shot into Kaelyssa, doing very little.  He then pops his feat.

Black Ivan is now clear of melee thanks to the WGI, and declares a charge on a Sentinel.  Before moving, thanks to the feat, he boosts (for free, cause Affinity) a shot into the Sentinel UA Officer, removing Vengeance.  Booyah!

The remaining Greylord swings his axe and kills a Halberdier. 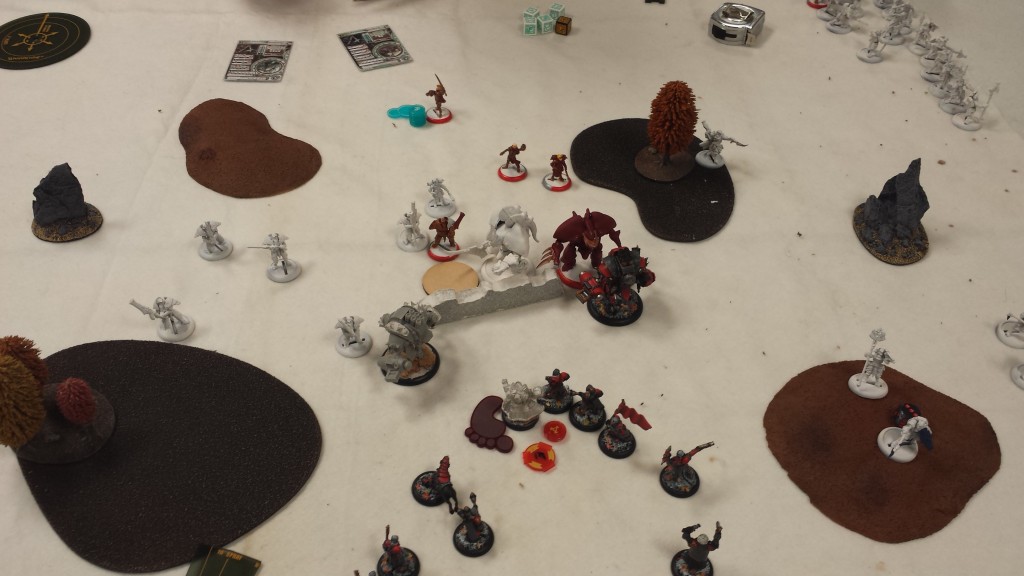 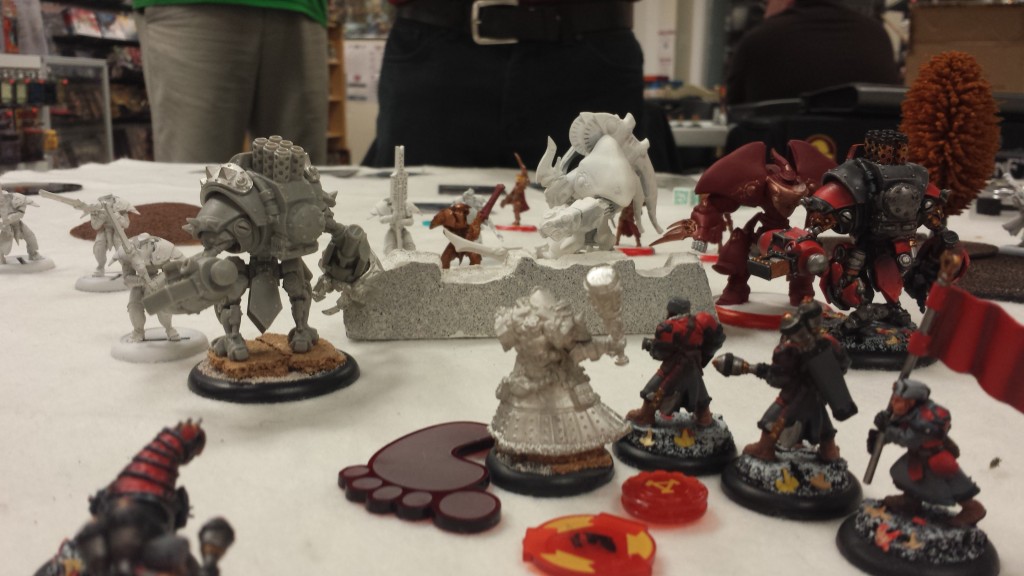 Discordia chances a free strike from the Destroyer to get a spray angle on the Dog. The Destroyer doesn’t do too much with just two dice of damage.  Discordia misses!

She moves up, and via Phantom Hunter, plugs the dog, but it toughs.  Still, removed from play for the turn, she puts two shots into Harkevich, doing minimal damage, but stealing his two focus.

Black Ivan eats another charge from some Sentinels, and gets to move again thanks to a miss.  He again tries to plug the hole where the Phoenix could go, but doesn’t quite make it.

The Phoenix comes over and swings at Harkevich, taking him down below half and setting him on fire, but failing to kill him.   The Halberdiers finish off the remaining Greylord. 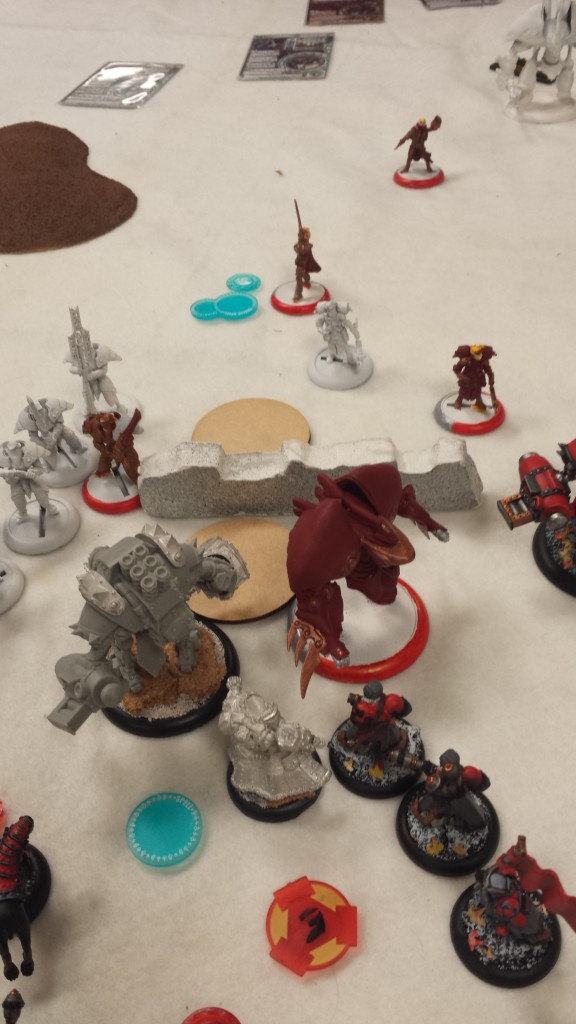 Black Ivan is nearly dead, the Destroyer has only a gun, and I have precious few troops left.

Harkevich is out in the open, and I’m out of stuffs to do. 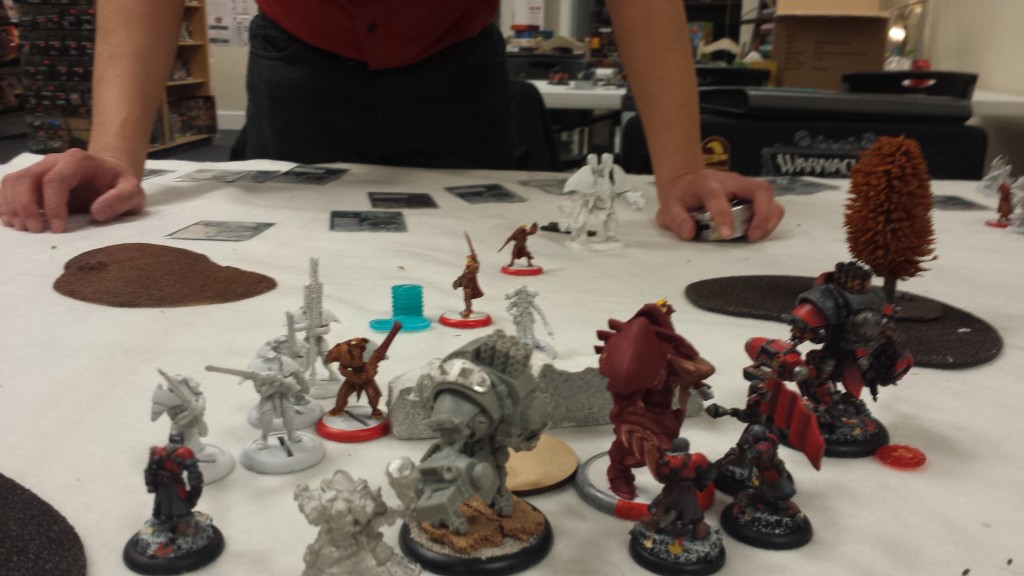 Kaelyssa shoots the dog dead, then steals both focus from Harkevich.  Harkevich is charged by the Sentinels, and it’s game over. 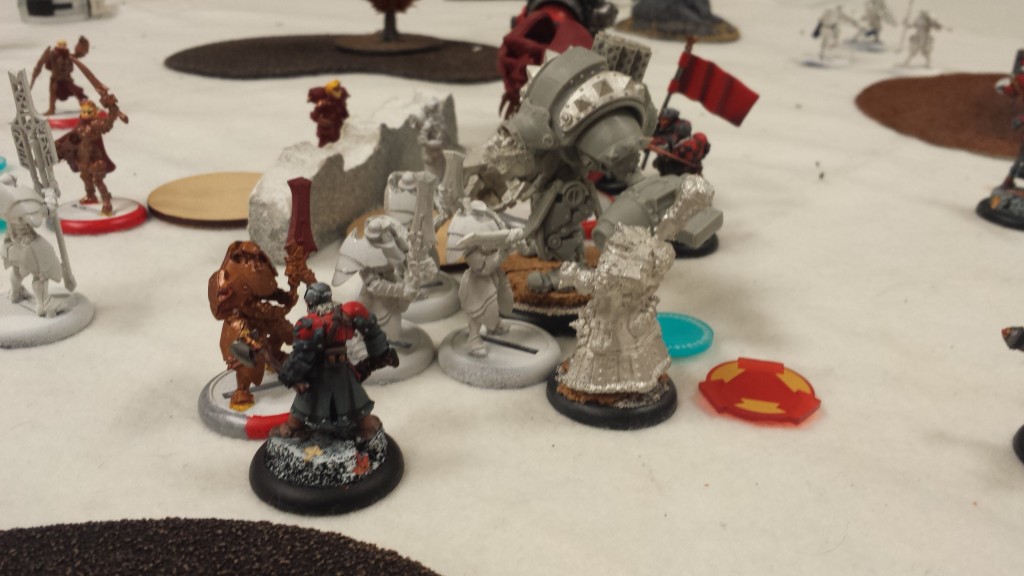 Retribution still gives me fits, but since my list doesn’t rely on any direct DEF or ARM buffs from spells (other than Escort), I found this game to actually be enjoyable.

Seeing three full units on the other side of the field, I’m incredibly thankful for having as many sprays as I do.  It was the only way I could deal with all of it.

The Behemoth was not the shining star he was in the last game, but I attribute that mostly to Kaelyssa’s feat.  Had he chaged the Phoenix, it would have died, and this may have gone differently.  I think I would have still traded it for the Phoenix (the Sentinels were well placed to effectively take out anything that took out the heavies), but had he been able to charge and the Destroyer been able to, the Feat turn would have definitely been one turn earlier, and both Ret heavies would be gone.

I must, must, must remember the freezy thing on the Greylords.  Had I done that, 60% of the Halberdiers would have been stationary, OR they wouldn’t have charged, and that flank would have gone very differently.

I also had no idea the Halberdiers were so offensive – I figured they were like most other cheap shield wall infantry, and were damage soakers.  Especially with the Thane, they have 13″ threat and are at MAT 7 or 8 and Pow 12 or 14 on the charge with Mini-feat?  Ouch.

I till love the Fortune / Tough combo on the WGI.